June 2013: We took a short(ish) vacation and went to New York City to visit Diane & Frank, and see the city & museums.

We took the train in, leaving our car with Paul's Mom. 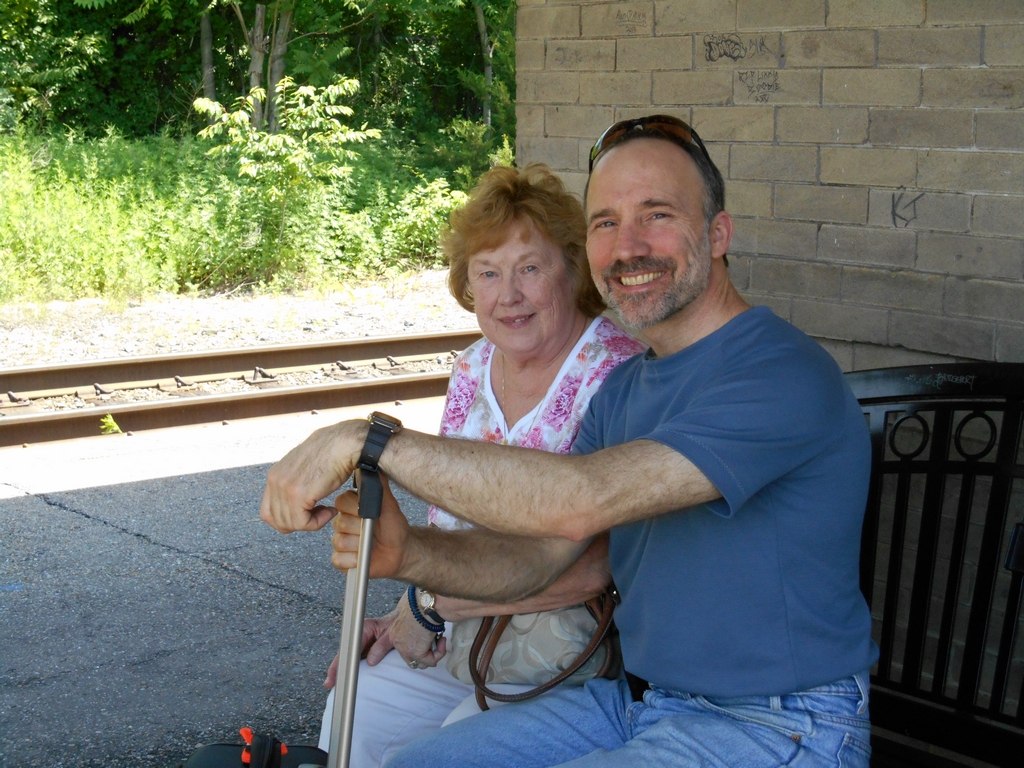 On the agenda for this trip was taking the Staten Island Ferry.  Anne had never taken this, and it is one of those recommended tourist activities.  The station itself is very nice.  Anne loved the benches. 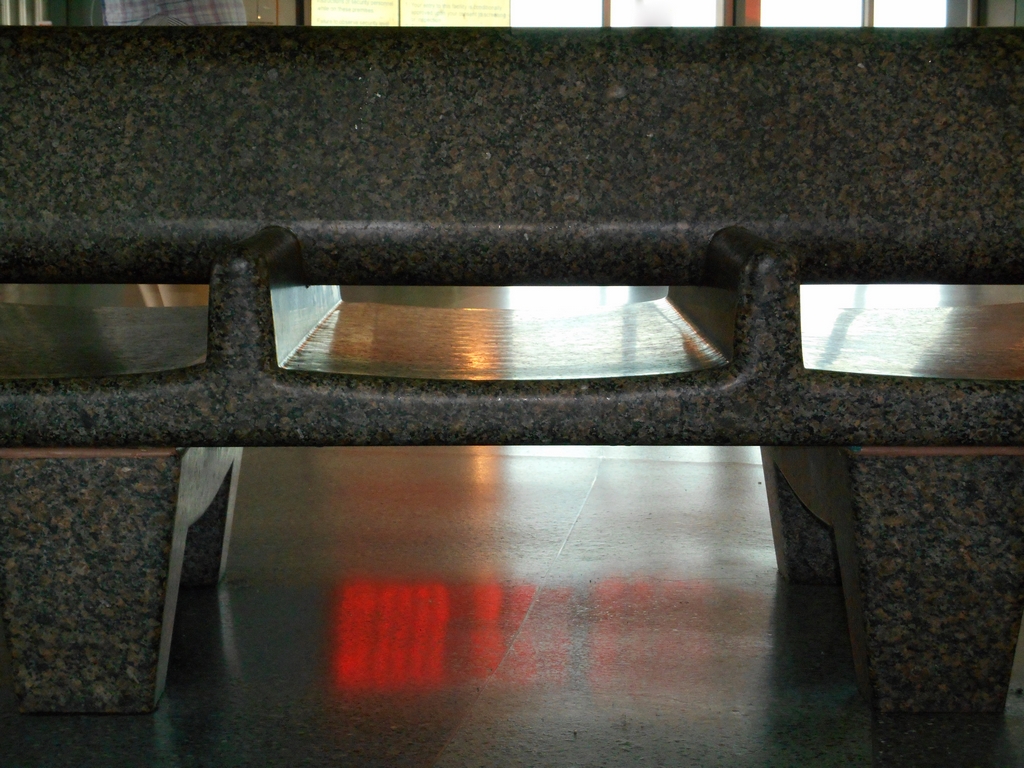 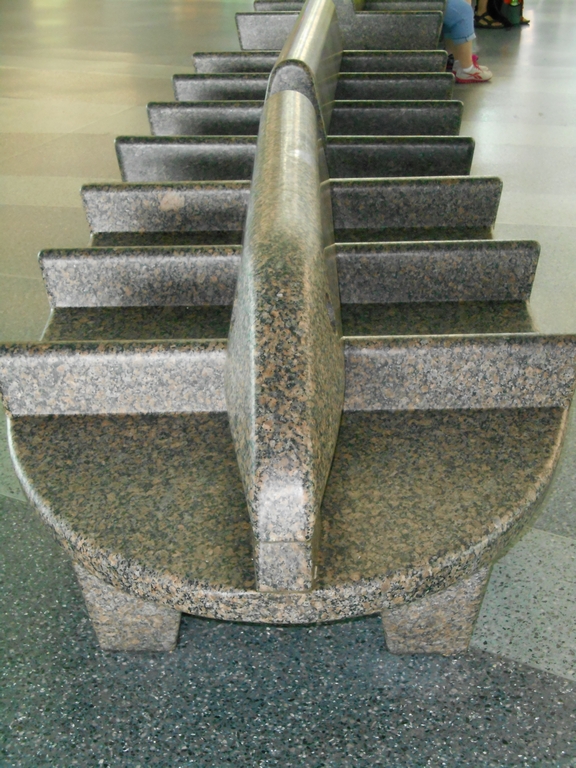 The big attractions of the ferry is the great view of Manhattan and of the Statue of Liberty that it offers.  Here is the view just leaving the terminal, and then the skyline from a little further out.  Battery Park is in the foreground of the second picture. The tall tower with the scaffolding and crane is the Freedom Tower. 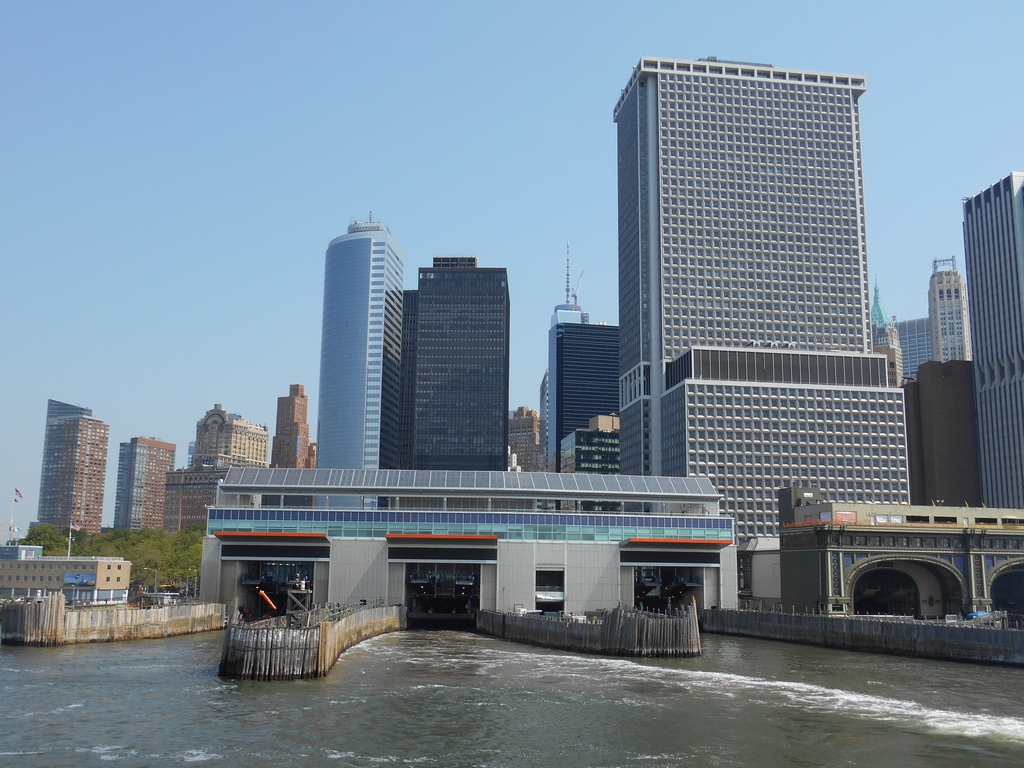 Paul on the ferry: 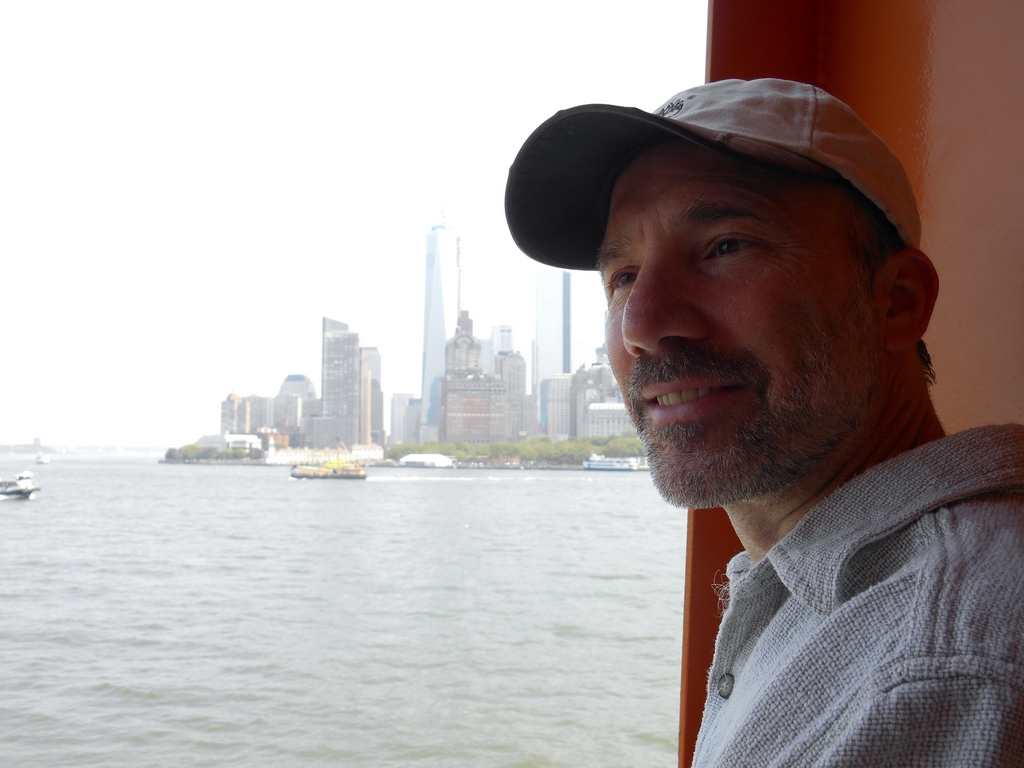 The Statue of Liberty has been under repair since Hurricane Sandy last Autumn.  It is going to open July 4th, just over a week after our visit.  You can see she looks pretty good. 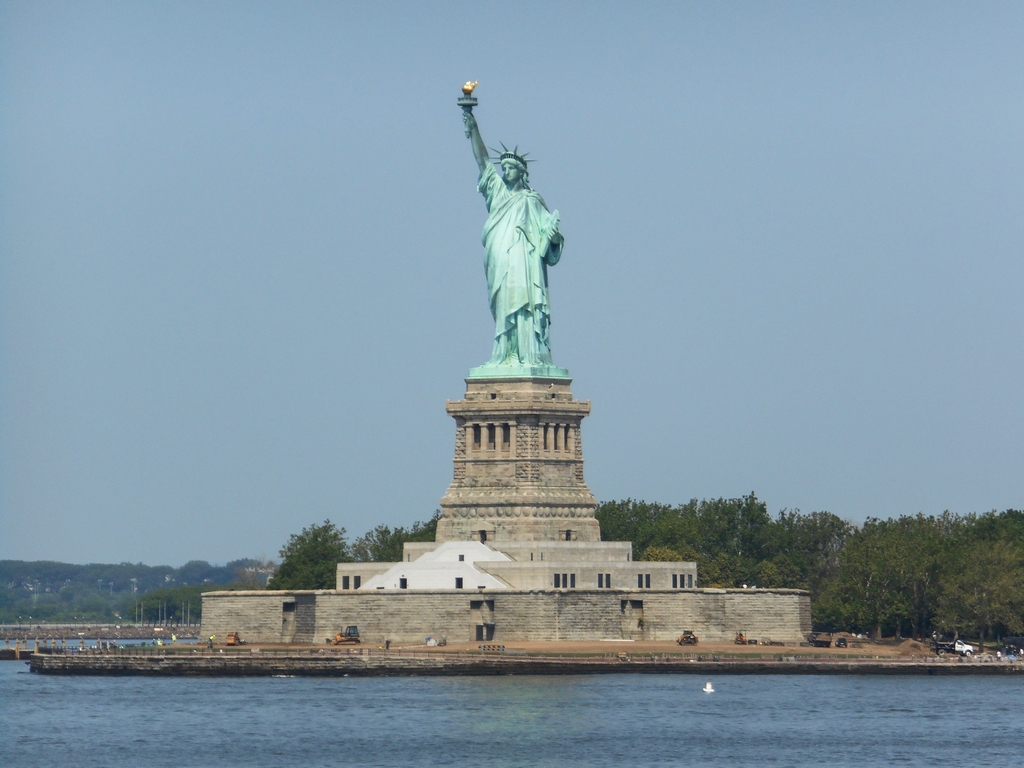 The ferries are very large, and popular. 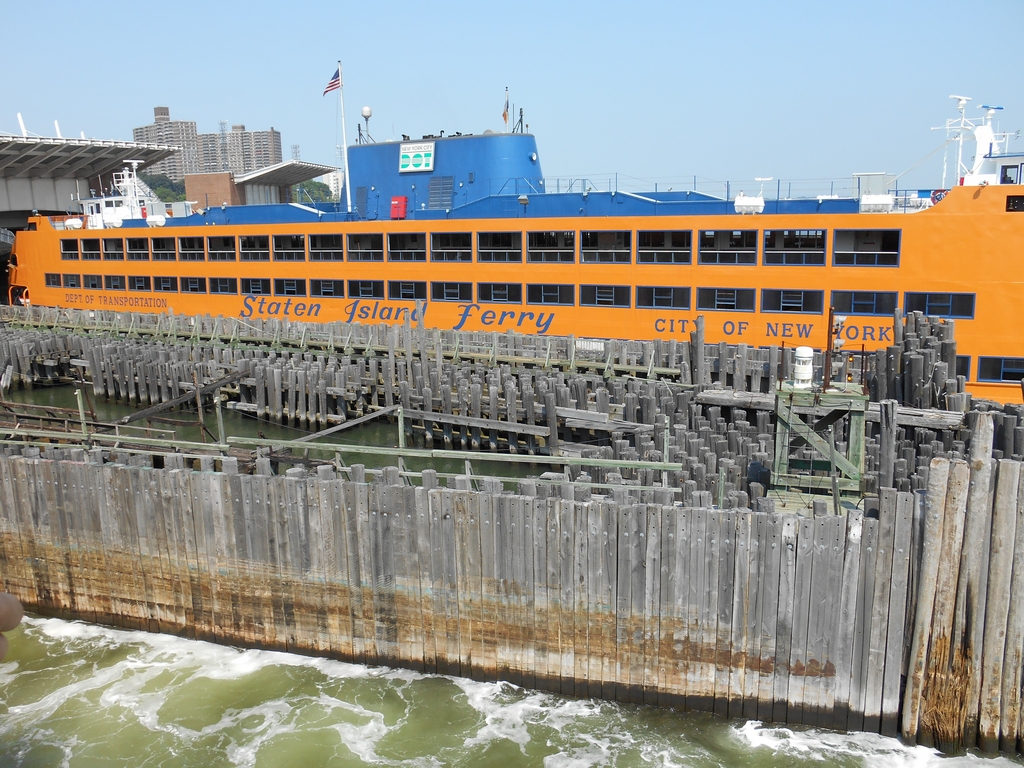 The Verrazano Narrows bridge is one of the sights from the ferry.  This bridge was the longest suspension bridge in the world when it was constructed in 1964, and is still one of the longest.  It connects Brooklyn to Staten Island. 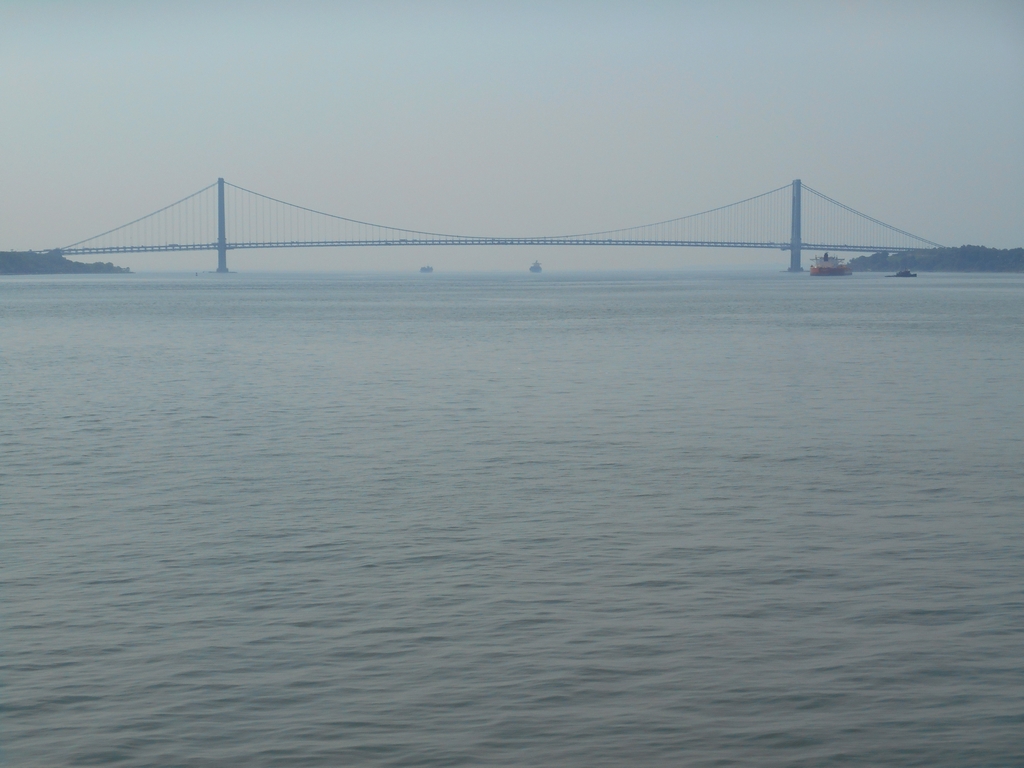 After (and a little before) the ferry ride, we checked out Battery Park.  The park takes up the Southern tip of Manhattan. Immediately outside of the subway station, there is a garden that has flowers, herbs, and vegetables. Notice that Paul is carrying a water bottle so his wife doesn't get too thirsty.

The park has some adorable bee-hives! 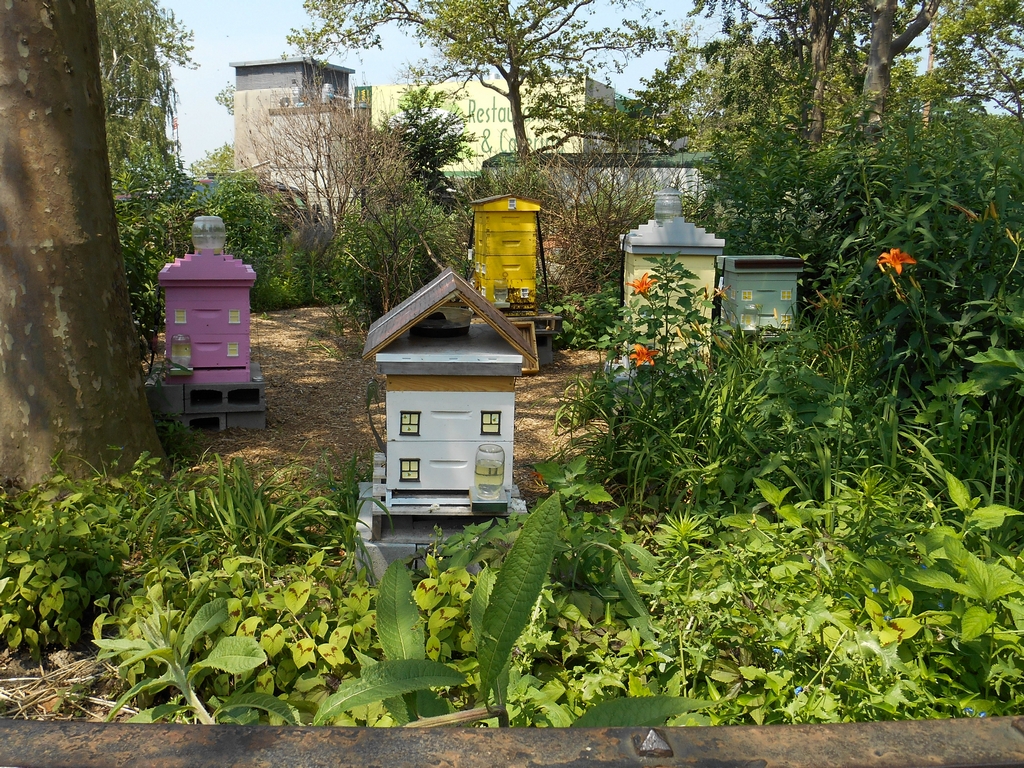 It was hot and sunny.  Anne wore her own shade. 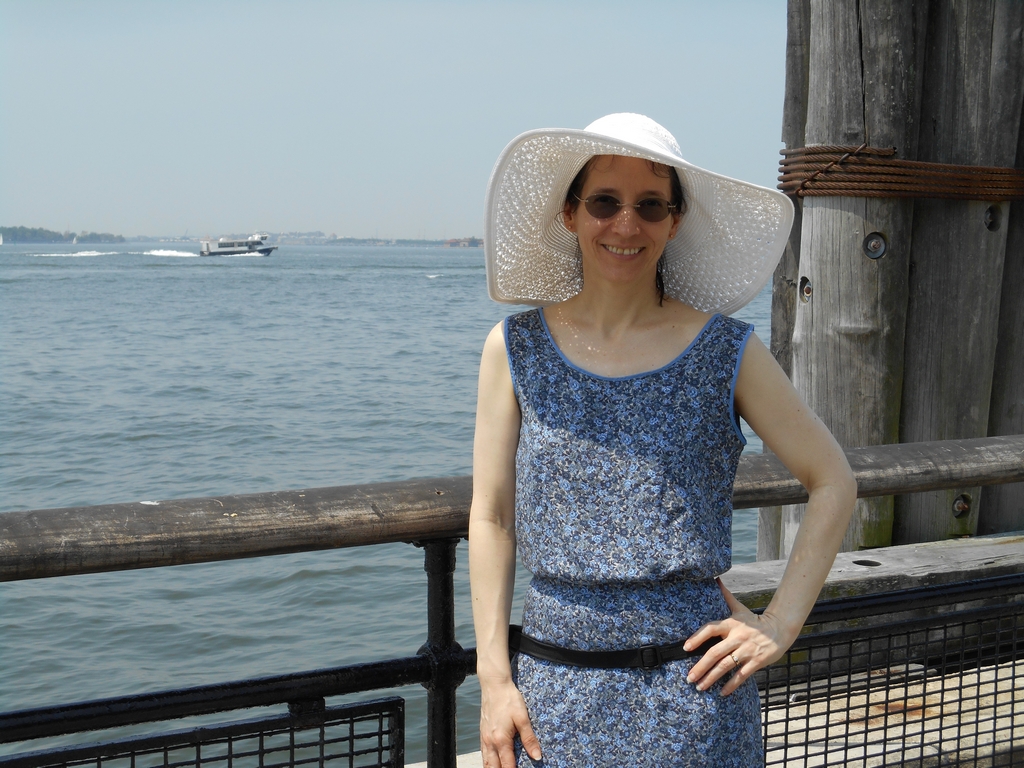 One of the monuments and sculptures in the park is the Merchant Mariners' Memorial.  This is a striking sculpture.  The man in the water actually gets covered up at high tide, as you can see from the water marks. 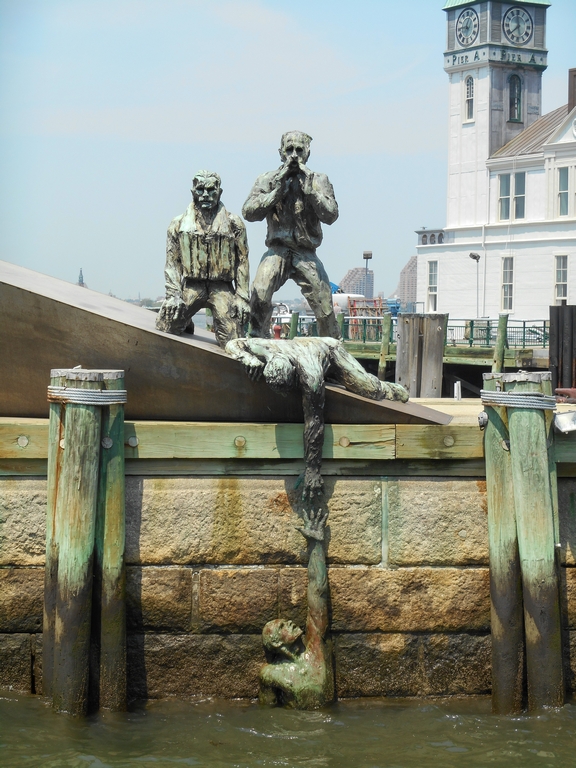 After leaving the park, we walked up Broadway and stopped at Trinity Church.  This is a large and very nice church.  There was a service going on when we went in, so we could not go in to the main chapel of the church from where we were (the back entrance).  But the small niche there had votive candles, so I lit one in honor of Jenn, who often lights candles. 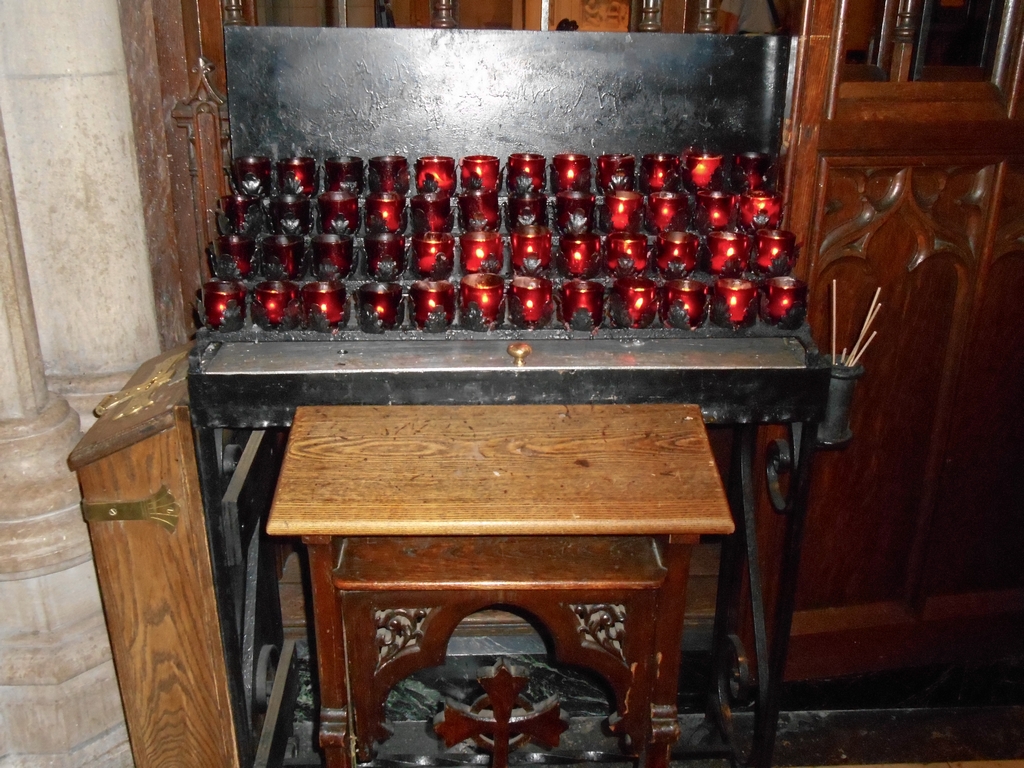 We continued up past The Freedom Tower, which is nearing completion.  Right next to that is a Verizon building, which has interesting artwork on the walls.  The Verizon building was damaged on the World Trade Center attack.  There are interesting motifs on the exterior of the building.  It looks to be a lion eating a lizard; I have no idea what they represent. 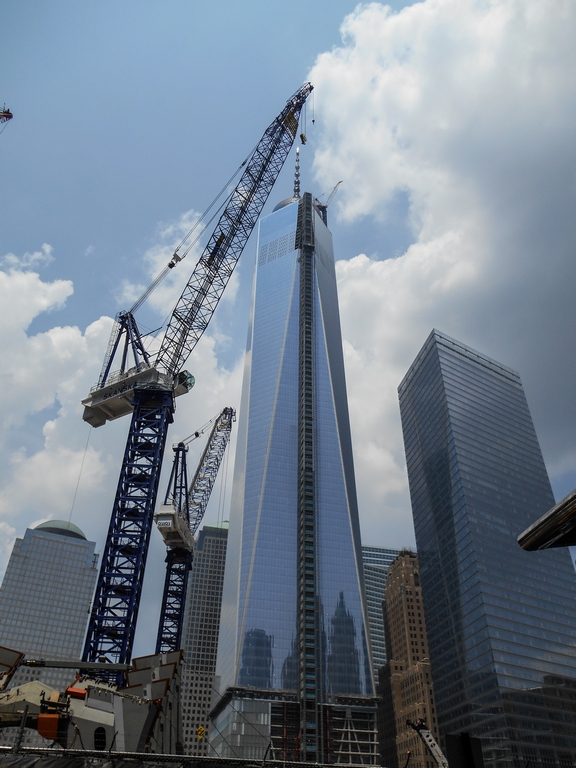 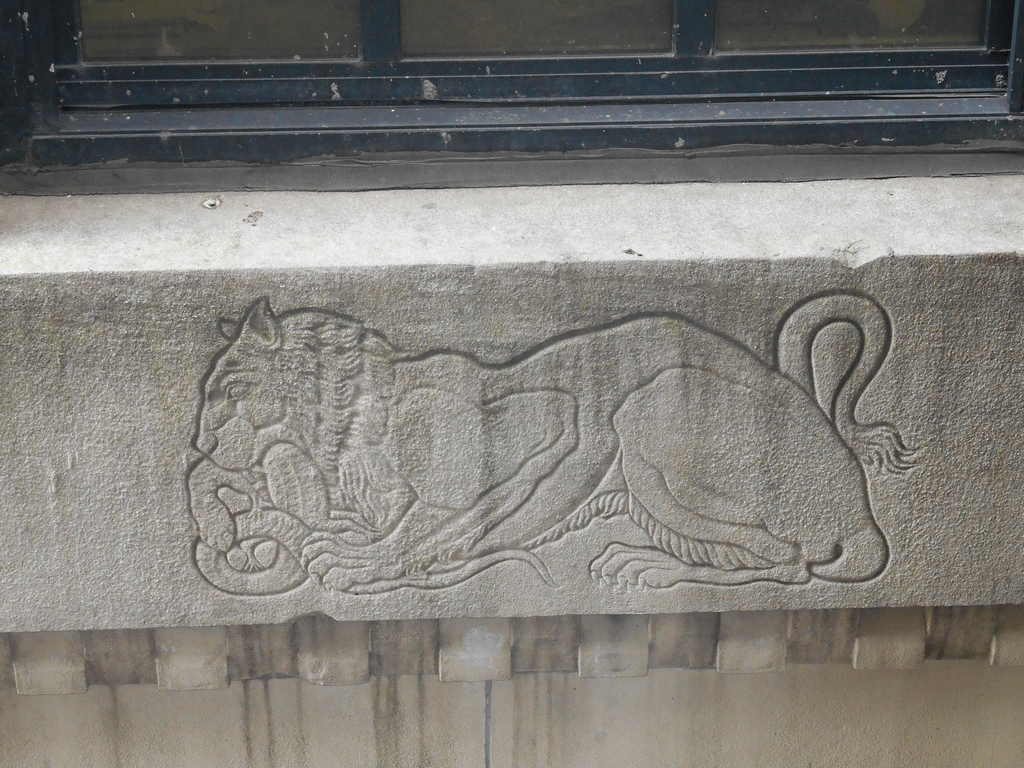 We stopped and had lunch at a little pizza shop that had a brick oven. 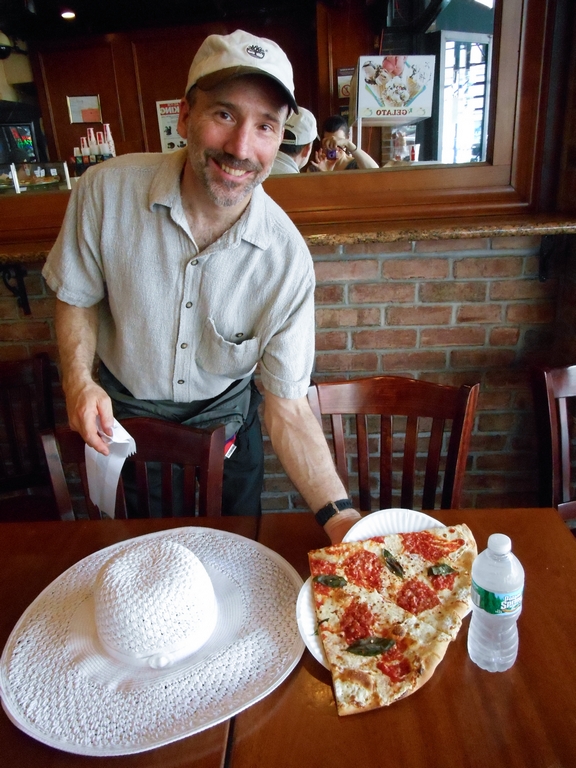 We then went over to the Chelsea art district area - only to discover that the art galleries are closed on Mondays!  So we walked back to the subway station, melting at this point in the 90+ degree heat, and went up to the Museum of Modern Art.  The air conditioned galleries were a welcome relief.  They didn't have a couple pieces that we were hoping to see, but we still enjoyed our visit. 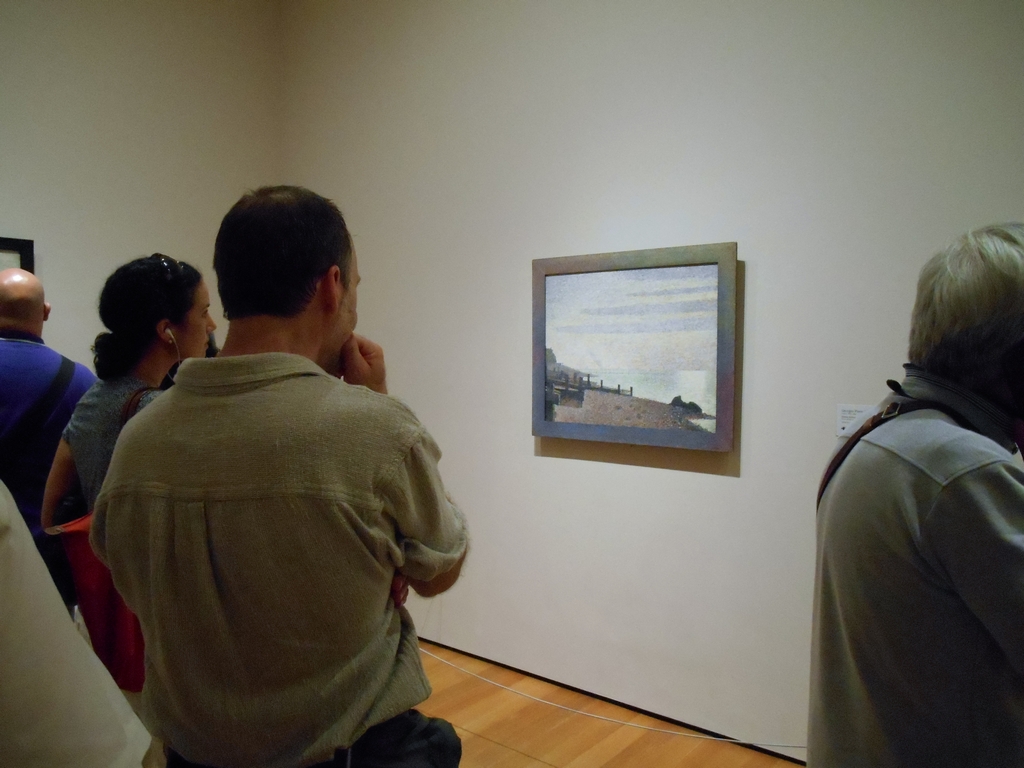 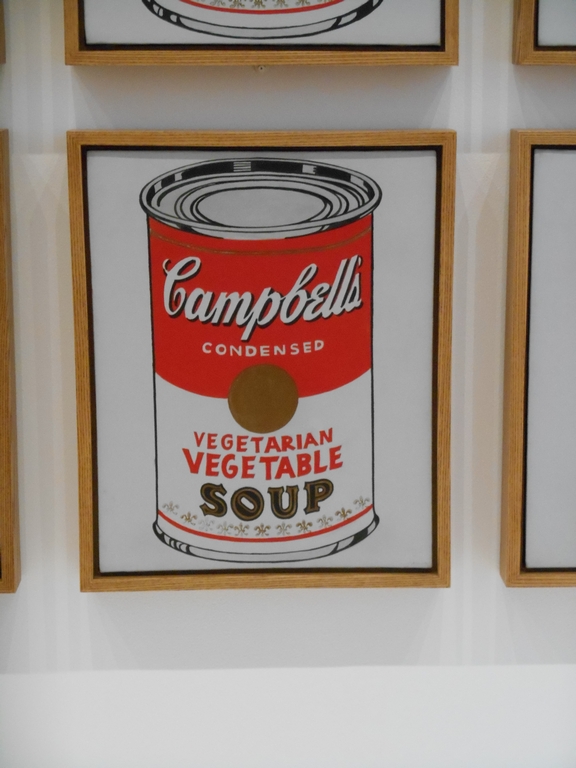 From there, we took a slow walk through Central Park back up to the apartment.  The musical Delacorte Clock was not playing, but was still a pleasure to see, as was the sailing pond. 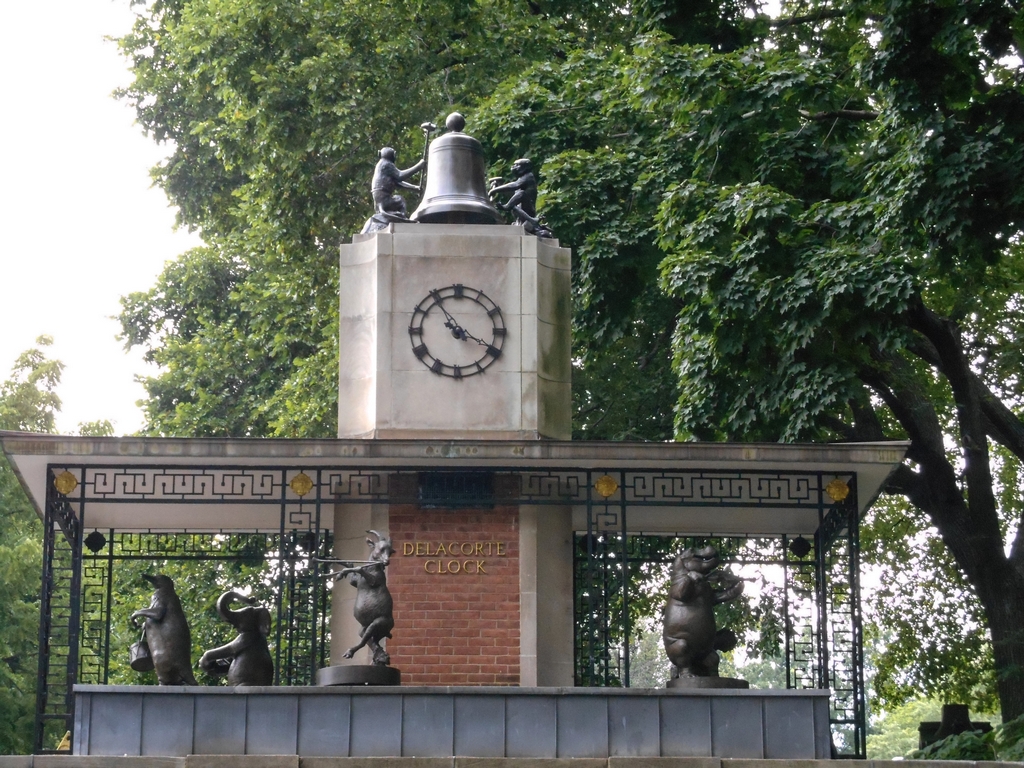 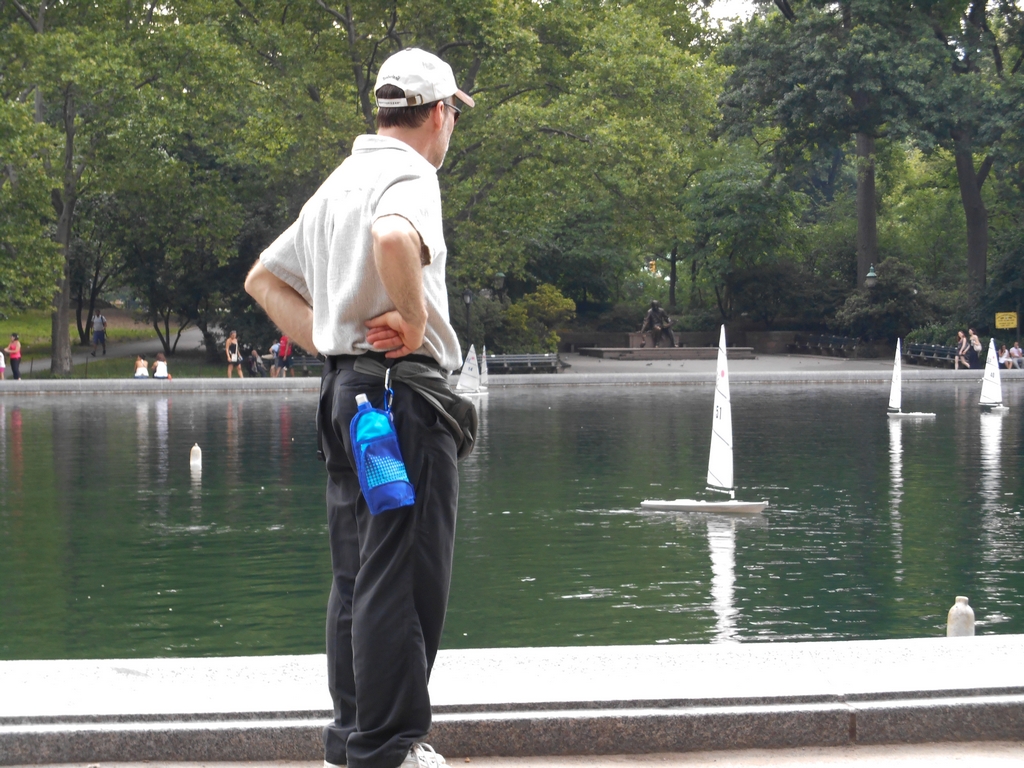 On to page 2 of the trip report