Anne made a visit to Mom & Gerry in March 2013.  The weather had NOT co-operated, and we had rescheduled a couple of times already.  This weekend, there was a mini-blizzard in Massachusetts Thursday overnight into Friday.  So Anne drove up Saturday morning, when the weather was warm and dry.

My apologies on the quality of these pictures.  I think both the camera and I were not at our photographer best!

We did a number of different tasks, from hanging a clock on the wall of Mom's MM apartment to updating pictures on the computer.  At one point on Saturday while leaving Nichols St, it occurred to me to take some pictures of the famous trees (Hemlock & Serbian Spruce). 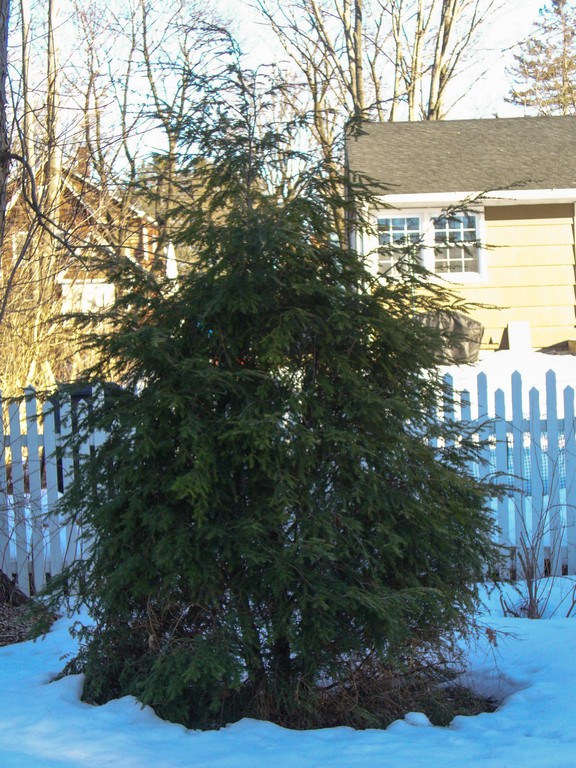 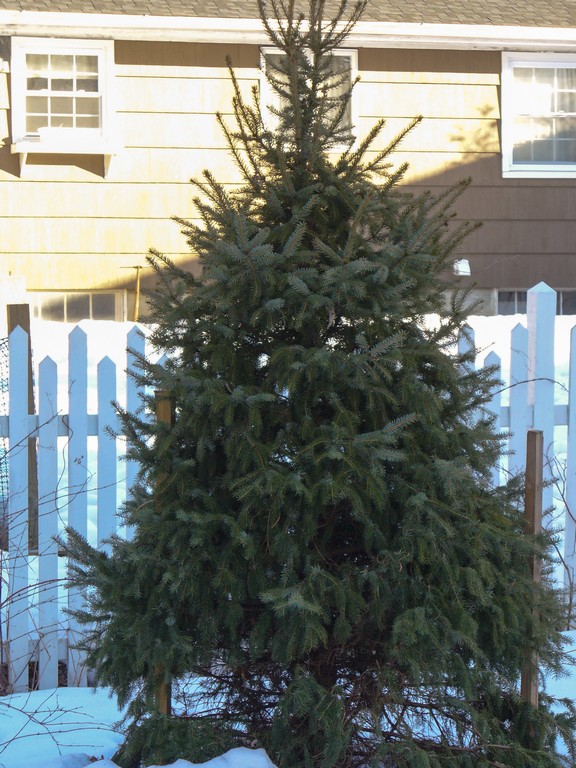 We checked out the changes at Campus Cuisine.  I forgot to take pictures, but the menu is definitely more appropriate for us now than it used to be.  Unfortunately, it isn't as appropriate for Mom & Gerry as it used to be!  But they have a spot for exhibition cooking that goes on every weekday where they cook up the special right in front of you.  And they have many vegetarian options.  Here are Mom & Gerry in a separate dining area of C.C. 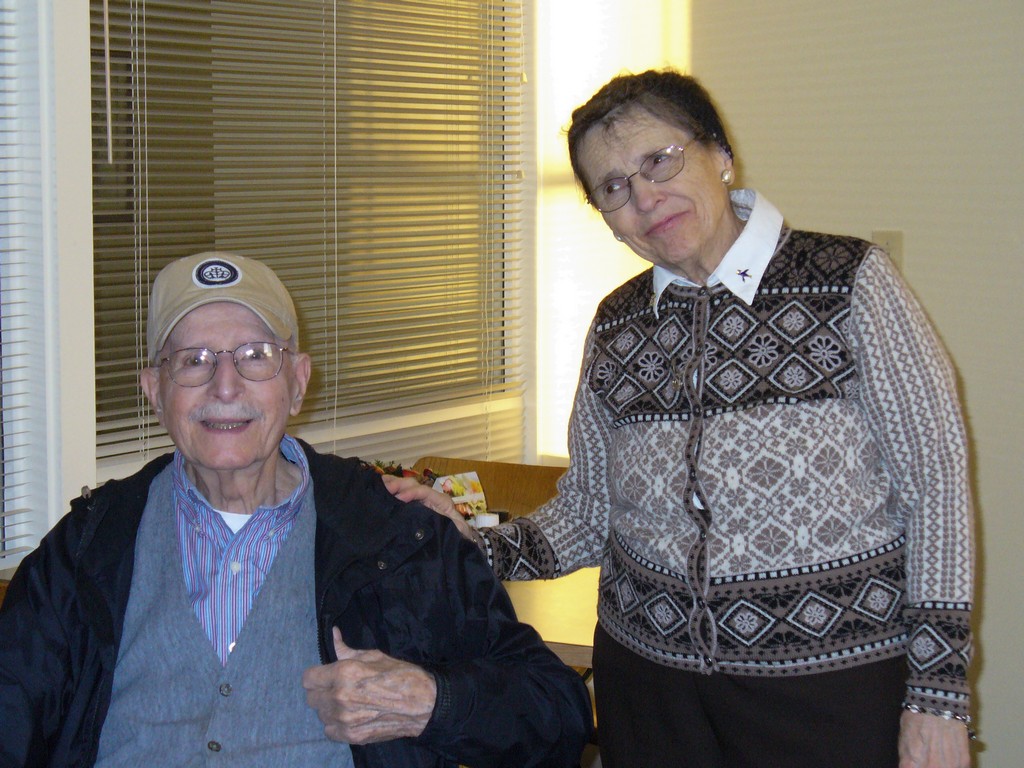 We went out to supper at the Chick-A-Dee Restaurant that night.  I was impressed with the restaurant.  Many other people must be also, because we did have a slight wait.  Mom had the idea that we should go in to their little bar area while we waited.  Gerry & I each ordered a beer, and Mom has unsweetened iced tea.  I had my hair back in a barrette during the day, but took the barrette off after we arrived at the restaurant.  When the waitress led us to our table, she walked very quickly, so I backtracked to make certain Mom & Gerry knew where we were seated.  Gerry commented that he didn't recognize me initially, since I didn't look like the woman they had come in with!  Okay, it was probably funnier if you were there. 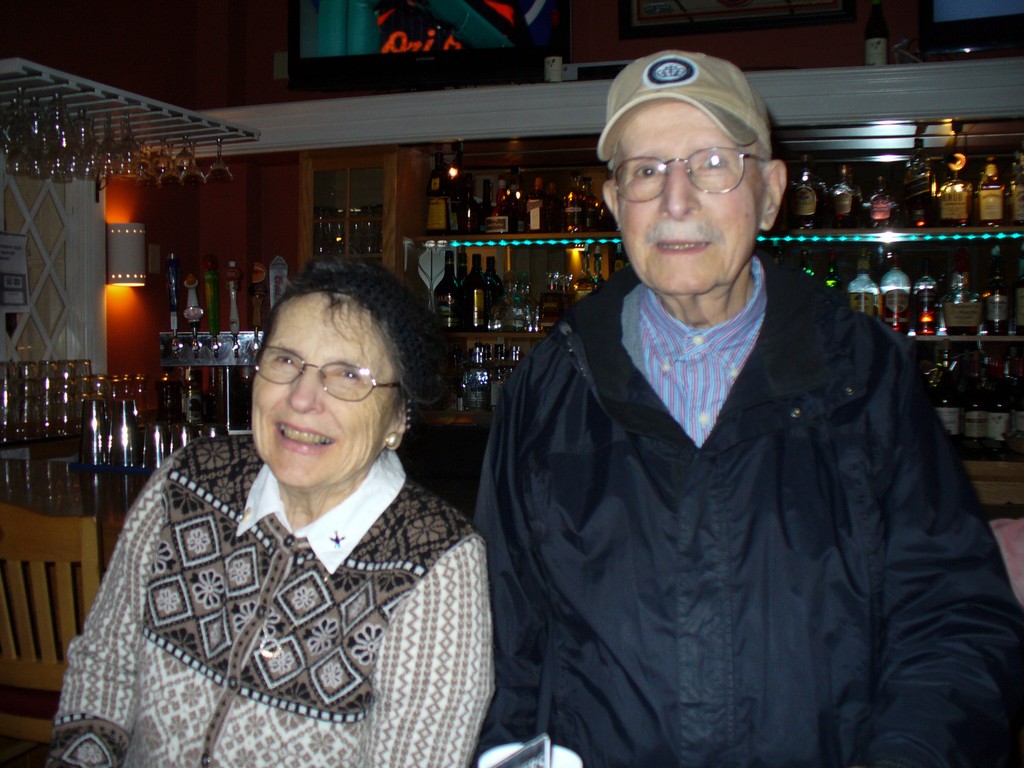 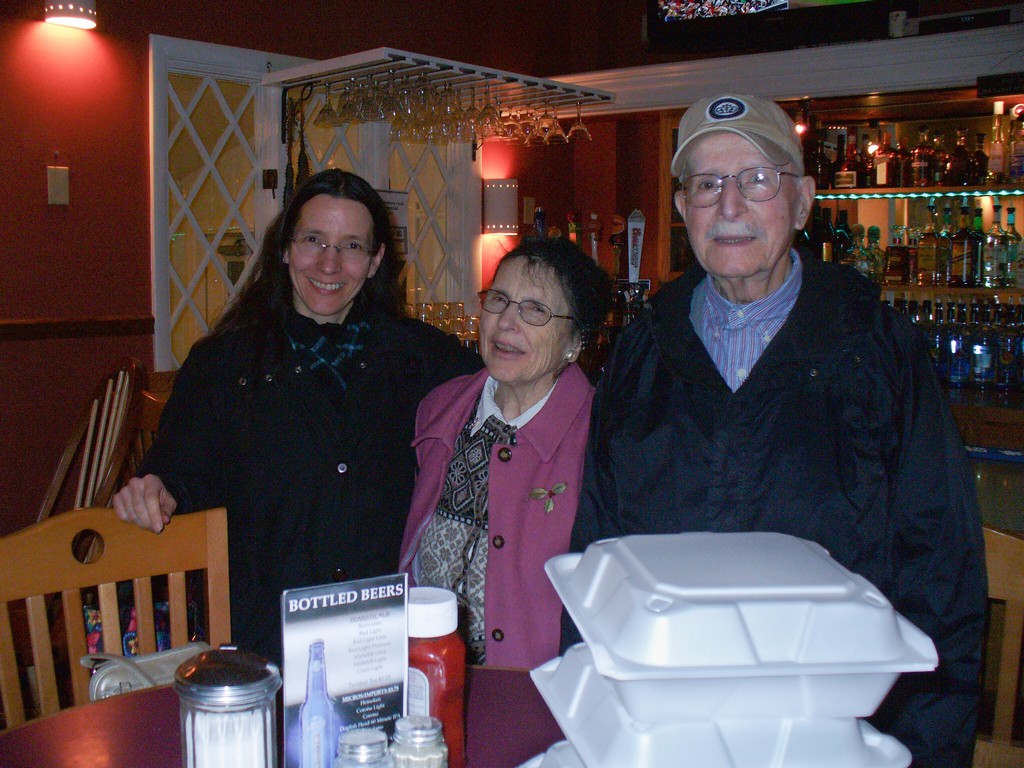 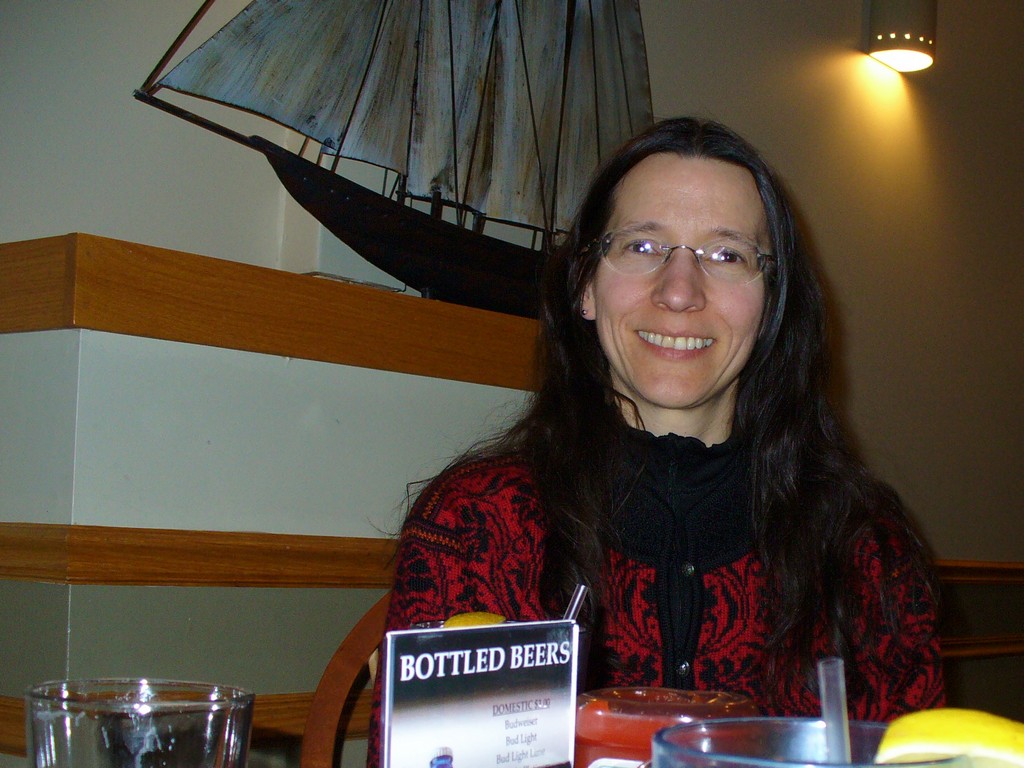 Sunday was a big shopping day.  We went over to the Auburn Mall.  The mall is, as with most malls, a shell of it's former self.  However, it still has some very nice shops in it.  We had lunch at Thatcher's Pub, and then started our shopping. 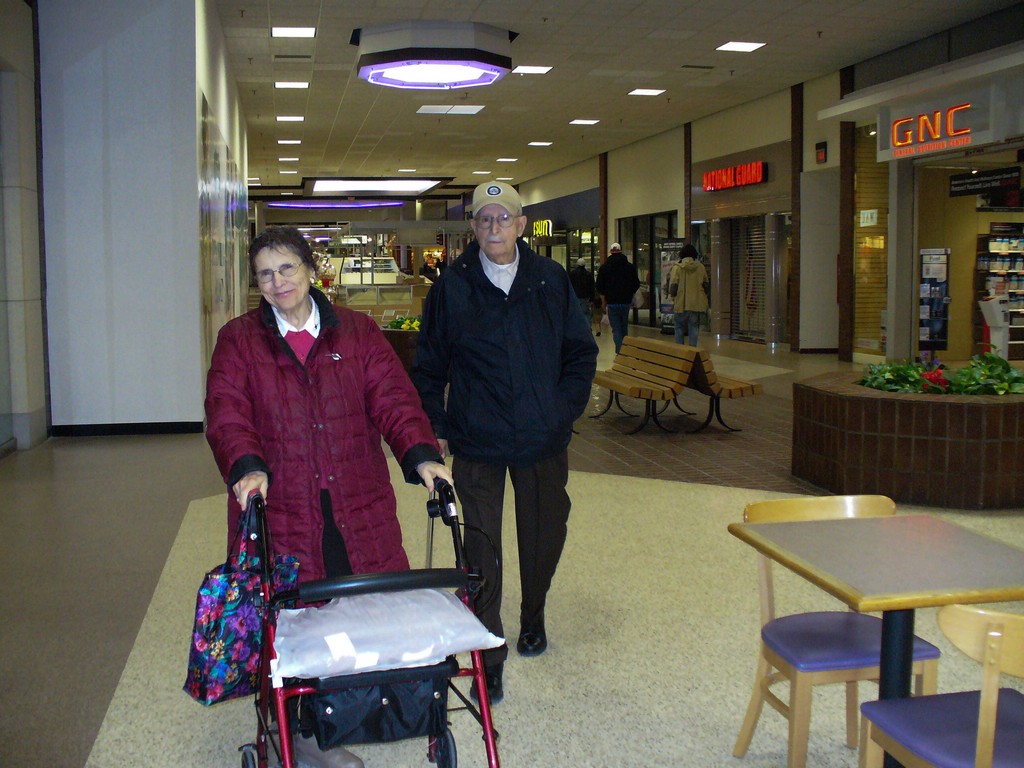 We stopped at a few small stores, and watched some young boys in a storefront that featured a large slot car race track.  The main shopping was at JC Penney's.  Gerry waited outside for us, reading the paper in front of the arcade. 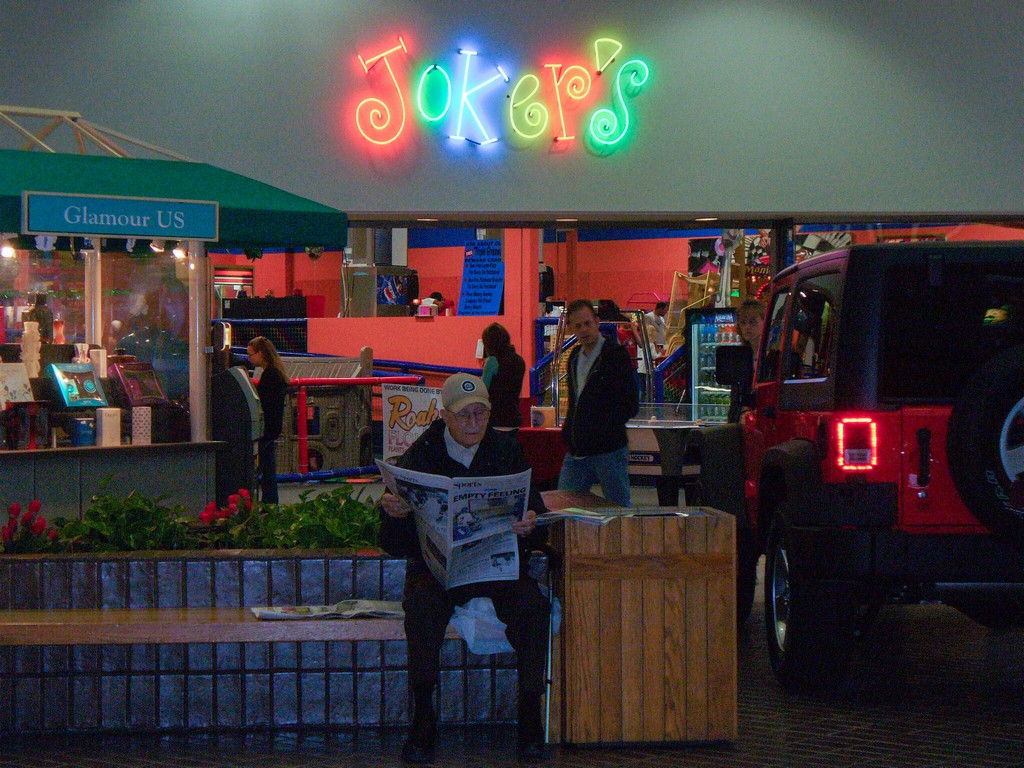 After our shopping, we went to Dunkin Donuts nearby to recoup and warm up (it was a bit chilly in the mall).  As we were drinking out beverages, Mom suddenly realized that our next (and last) planned stop, Lamey Wellehan shoe store, probably closed at 5 PM - which was less than 10 minutes away!  Luckily, it was close by.  So I left them there and dashed off to the store to get the required Smartwool socks (plus one for myself!).

After our successful shopping, Mom was ready to relax.  After I did a few little things, Gerry & I went to Pedro O'Hara's Restaurant for supper.  The waitress rattled off a number of possible beer selections.  We weren't certain which we wanted, so she nicely brought us a couple (generous) samples.  The winner was Smithwicks (pronounced something like smid-icks). 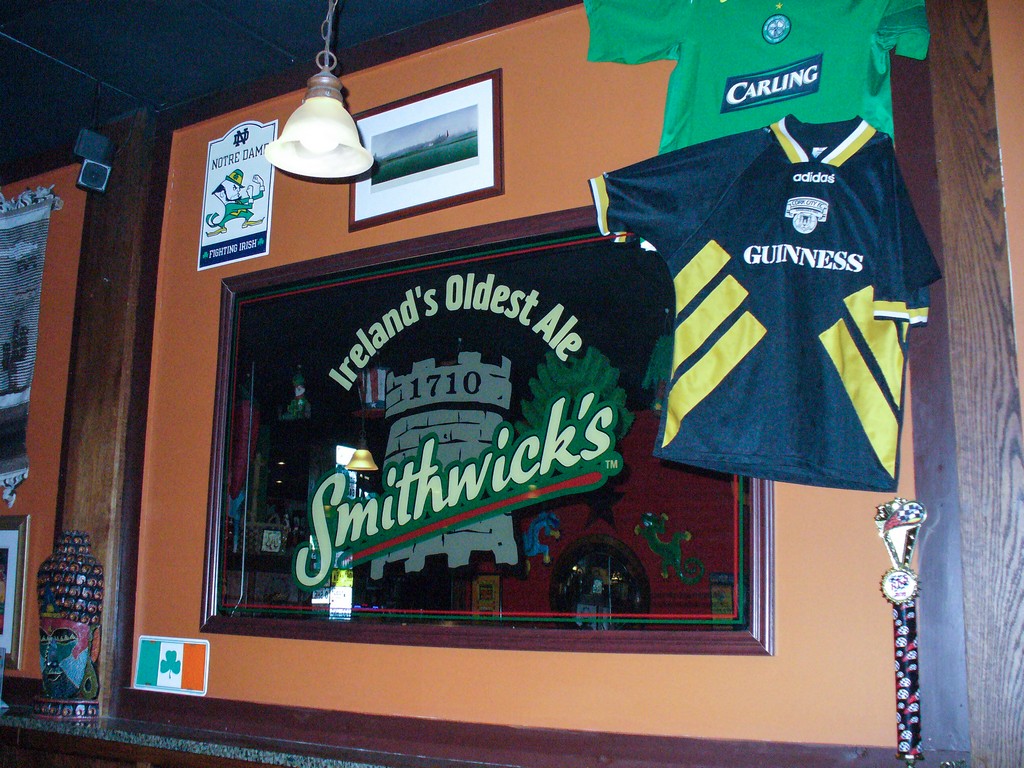 Anne took Monday off from work.  This allowed us to have a nice relaxed breakfast at Cole Farms and still enabled Anne to get home before the traffic got too heavy.