I'm going to 'cheat' on this trip report. Matt already created a nice writeup, so in many places I'm going to insert his writeup, & then add to it, along with some pictures. If you have already read Matt's notes, you can just skim that to remind yourself of the topic.

Paul and I had an earlier flight than Matt's family. When we arrived in Minneapolis, at around 10 AM, we called Uncle Bill. He and Aunt Nancy met us at the airport. Ted & family had already arrived, and were sleeping back at Nancy & Bill's house. They had put some items into the trunk of Bill's car. We then left from the airport, taking Bill's car with us. We had BK Vegies for lunch. (Burger King is such a boon for vegetarian travelers.) We arrived in Grand Marais and had supper there at Sven and Ole's Pizza. Not bad pizza; we had eaten there in 2000 during the Lutsen get-together. We left Grand Marais at around 6 PM, arriving at the outfitter's, Tuscarora Canoe, at 7 PM. We slept in a bunkhouse for the night, with a 2nd bunkhouse for Ted & Matt's families when they arrived (much later).

The fire from this spring was evident North of the outfitter. In fact, the blackened trees went right up to the edge of their property. I think someone said that they lost one building.

After spending the night in a bunkhouse, we got outfitted for our trip into the Boundary Waters Canoe Area Wilderness (BWCAW). We had the maximum number of people (9) and canoes (4) allowed per party in the BWCAW. We set off at about 10:45 AM from an entry point only a short drive from Tuscarora, in a small unnamed lake. After a short paddle we reached our first portage, which was 68 rods long. (One rod is 16.5 feet.) The portages involved emptying the canoes and carrying all items to the next lake. We had 16 items (including the 4 canoes) to carry, so most people had to make two trips on each portage.

Then we canoed into another small unnamed lake, then portaged 30 rods into Ham Lake, arriving at about 11:45. We got to the other side of Ham Lake at about 12:15, then portaged 24 rods to Cross Bay Lake, a long, narrow lake. We stopped for lunch at just past 1:00, and cooked up some hot dogs - boiled over the camp stove! We took off again at about 2:15, arriving at the next portage - a 60 rod portage to Rib Lake - only a few minutes later. We arrived at the 35 rod portage to Lower George Lake at about 3:00, took about one-half hour to get to the other end of that lake, then portaged 30 rods to Karl Lake (aka Upper Long Island Lake). We found an empty campsite just before 5:00, and set up camp for the night.

That night we had steak for dinner. No campfires, though, because the dry weather meant the Forest Service imposed a campfire ban for the duration of our trip! But Jimmy, Cliff, and Craig did get in a swim that evening.

We traveled (by canoe and foot) 8.3 miles that day (Sunday).

A history of the English measurement 'rod' from Wikipedia.

The 16 items that Matt mentions are the 4 canoes and then 12 large bags. We also had a few smaller bags. The outfitter provided 'Duluth Bags', which are large green canvas backpacks. They lined each with a large white kitchen trash bag, for added water protection.

Our canoeing ability improved each day over the course of the trip. Kelly had asked the outfitter for tips on rowing. The biggest 'takeaway': use your body, not just your arms.

One of the highlights of the trip: Loons. We saw a number of them, and often heard their calls. Although I've seen them before, I don't think I have in this quantity. I loved it.

The camp sites are established but not reserved. So you just take one that is open (they are marked on the map that the outfitter provided). They have latrines (deep holes in the ground with hard plastic seats above them, open to the air). This is much nicer than having to dig a hole for yourself.

Pictures from Sunday: The 1st two are after various portages. The next two are on the water. Note the Duluth packs visible in Matt's canoe. The last picture is from lunch. 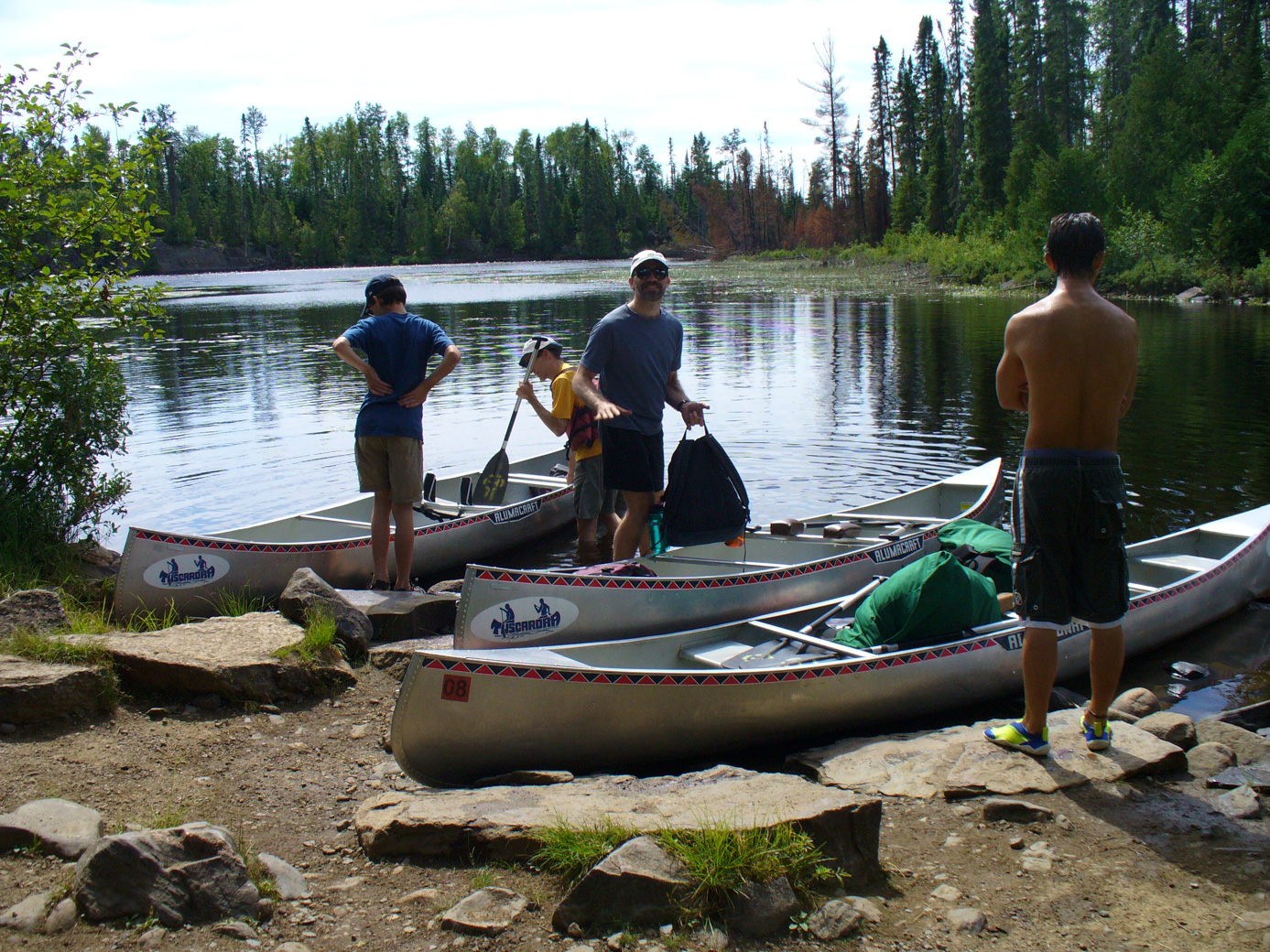 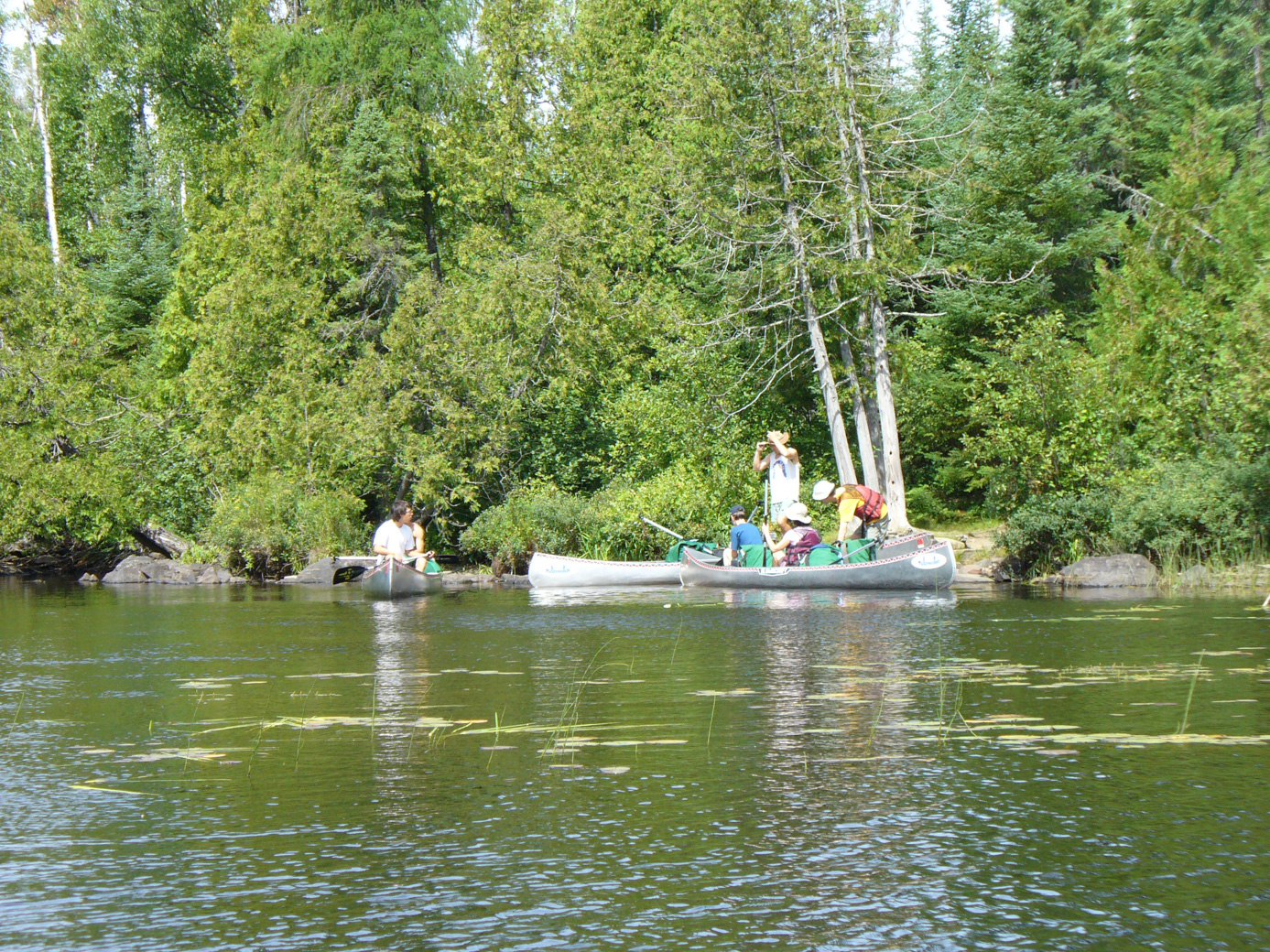 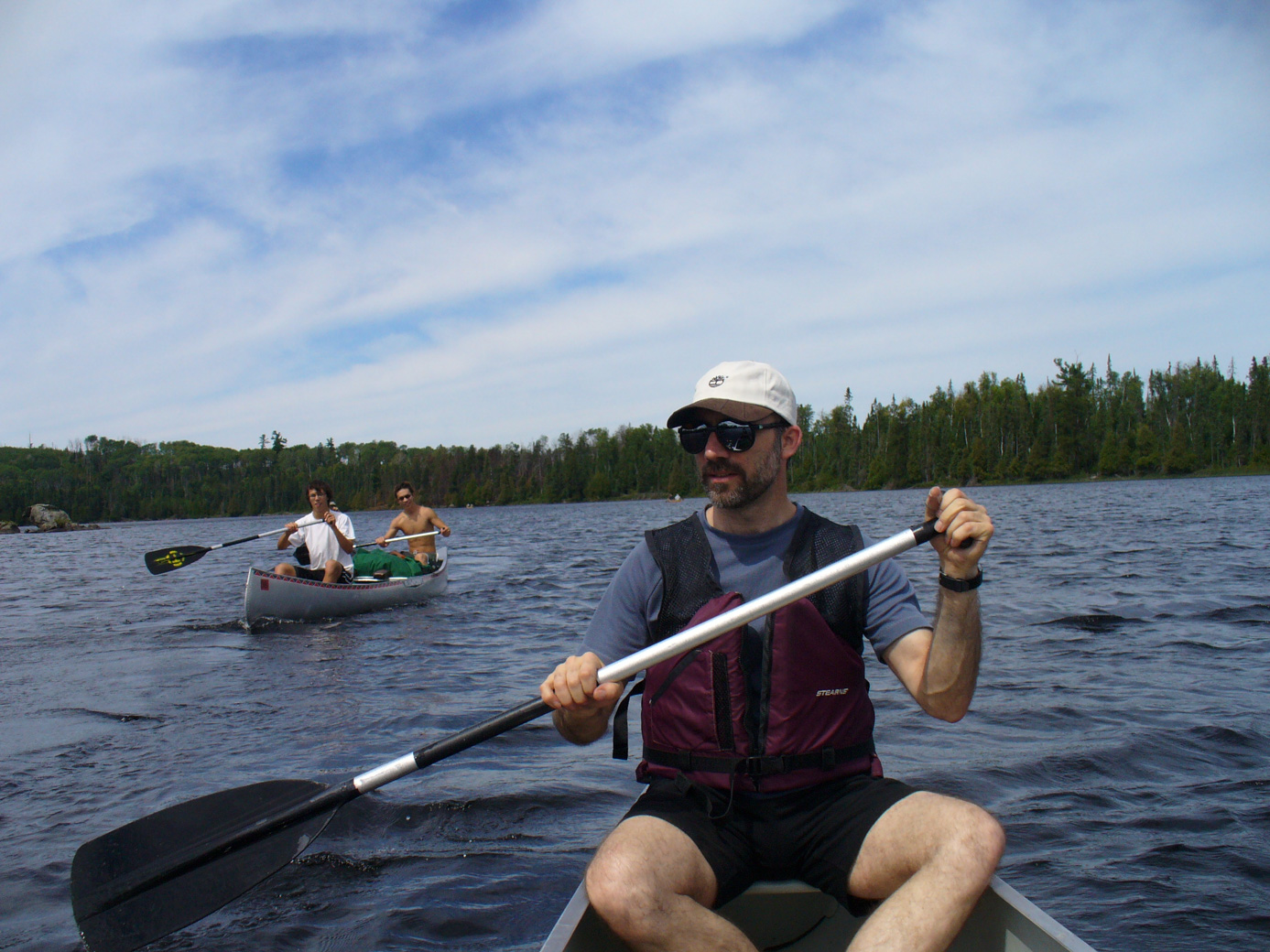 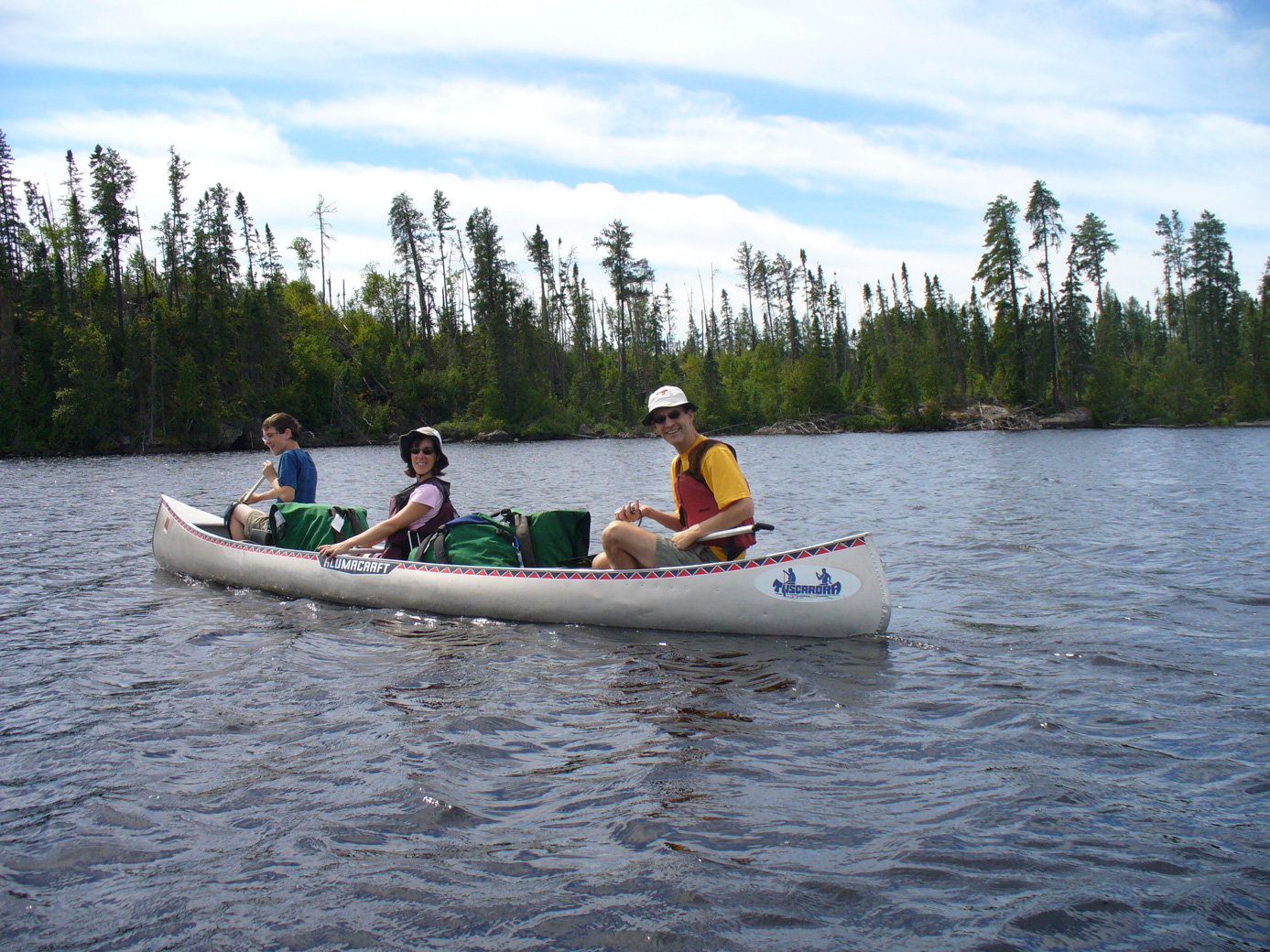 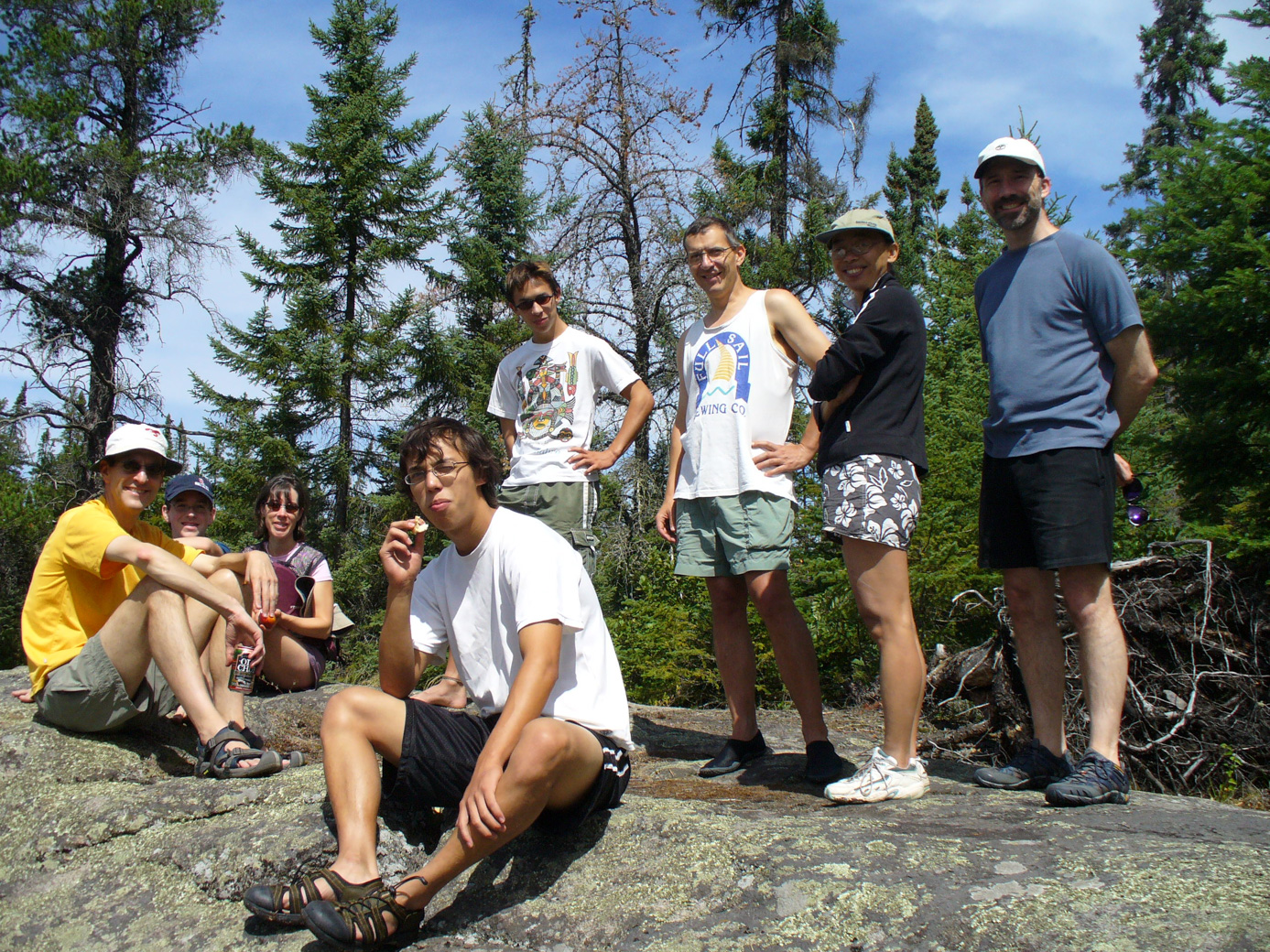 The next morning after breakfast (bacon and eggs for Matt every morning) we took off at about 10:00 AM. We made it to the end of Long Island Lake at about 11:00. The portage between Long Island Lake and Muskeg Lake was supposedly 24 rods, but it turned out to be two portages - one was 24 rods, then we paddled through a swamp, then we portaged another few rods (maybe three) to Muskeg Lake.

We stopped a little before noon for lunch at the only campsite on Muskeg Lake - a great spot. Ted, Matt, Cliff, Craig, and Jimmy went for a swim. Then at about 1:00 we took off for the next portage, 185 rods (and steep slopes) to Kiskadinna Lake. That was our longest and hardest portage, but we made it without too much difficulty.

Shortly after we entered Kiskadinna Lake Anne spotted a huge bull moose on the south shore of the lake. Matt paddled closer to get a photo, but Kelly didn't want to get close, so Matt had to settle for taking a photo from about 150 feet while in motion. Kiskadinna Lake is long and narrow, so it took us about 45 minutes to get from one end to the other. We then portaged 32 rods to Omega Lake. It took us about 30 minutes to get to the other side of Omega, and we then portaged 50 rods to Winchell Lake, arriving at an unoccupied campsite at about 4:30.

That evening Ted, Matt, Craig, and Jimmy paddled across the lake to Mount Winchell, and blazed a path to the summit. It was a beautiful sunset, which we watched slowly to allow the rest of the group time to finish the dishes. (The side trip totaled 1.5 miles.) Back at the campsite, we snacked on popcorn that evening.

We traveled 8.1 miles that day (Monday).

The Perseid Meteor Shower was at it's peak while we were there. However, it was just an average type showing, with a few good ones and a few smaller ones. We had joined Ted in the middle of the night to check it out.

It turns out Ted is an expert camp pancake maker. He made them each morning for those interested.

Our outfitter did a very good job organizing and packing everything. Every meal was packaged in it's own labeled baggie. Even the eggs, which were in one container, were individually labeled so we knew how many were allocated per day. At one point we saw a couple of canoes heading to the same portage as us, a ways in front. They were still there when we arrived, and were very slow. It made us appreciate the efficiency of the packing, since we had fewer containers (even if they were the behemoth Duluth bags).

Since we couldn't have campfires, I broke out the s'more Pop Tarts. They are really very good when toasted up. 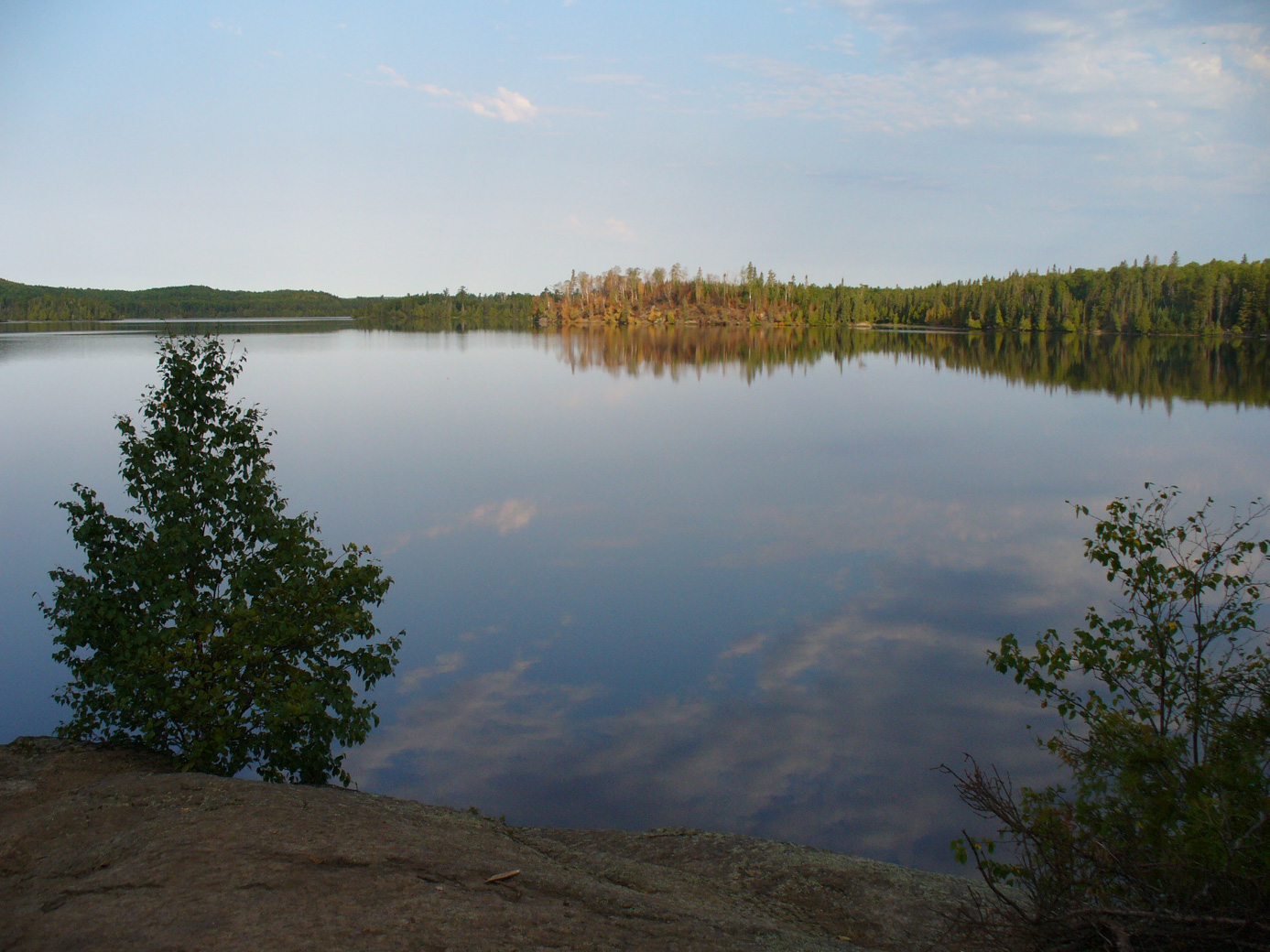 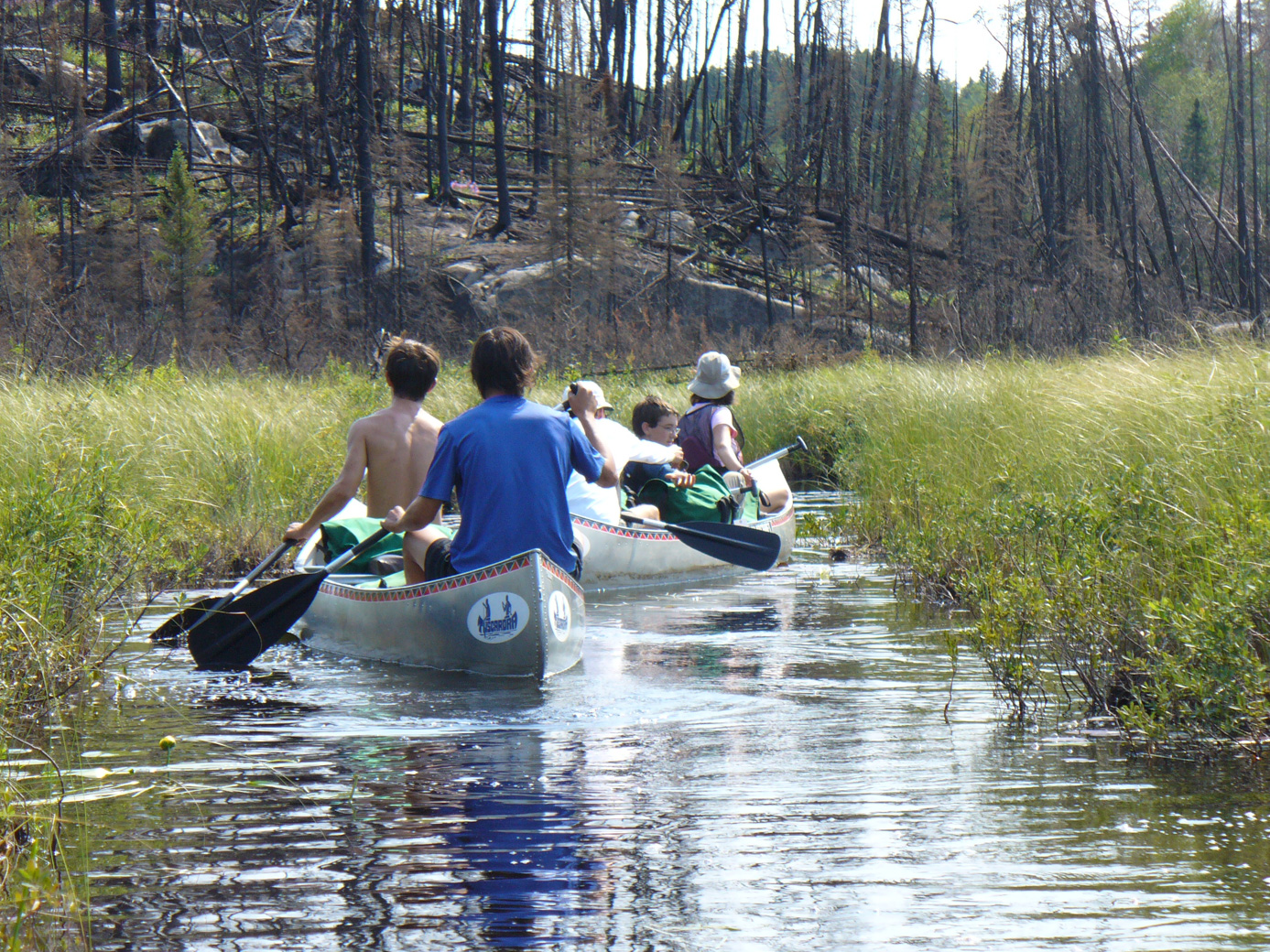 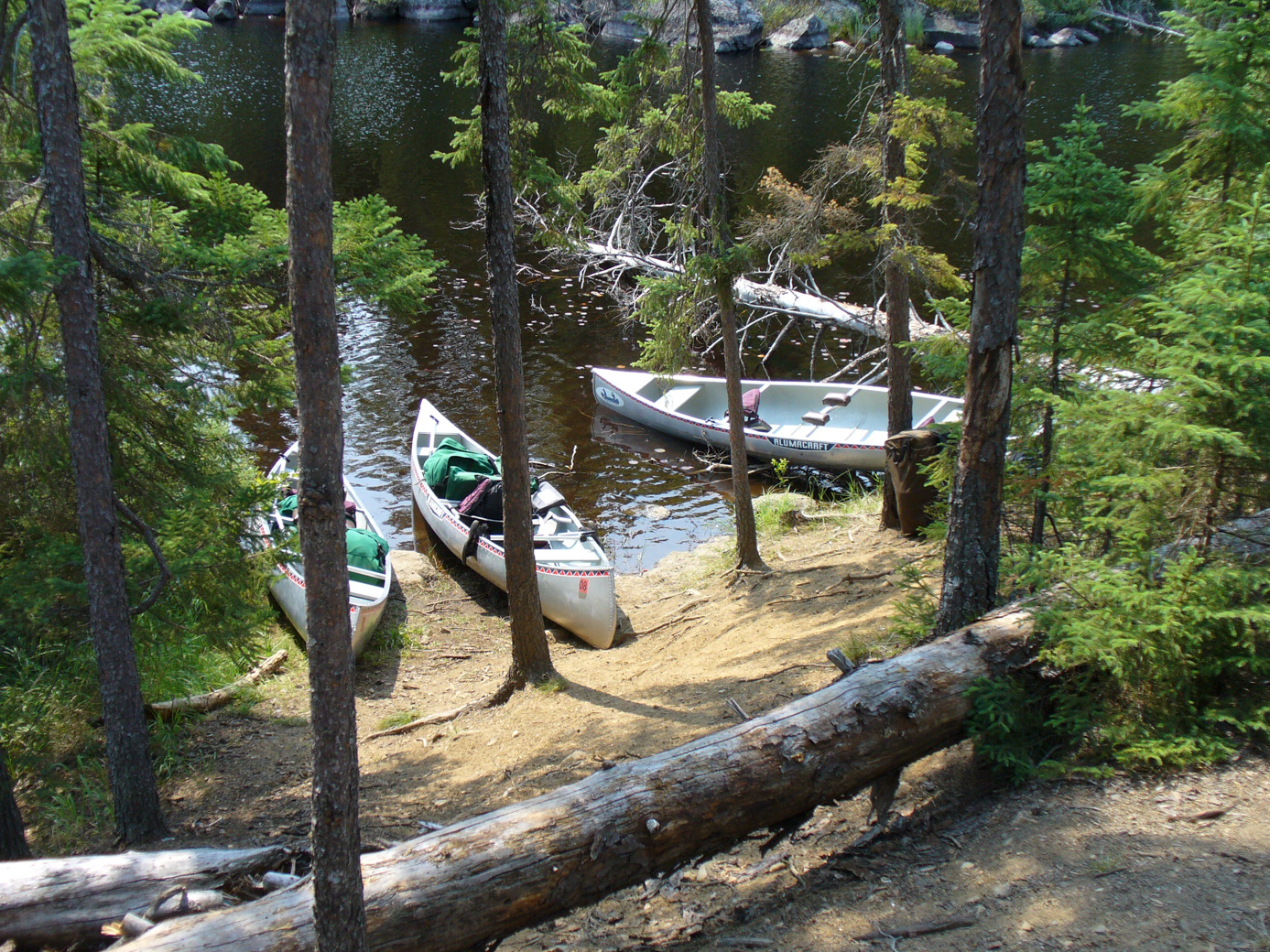 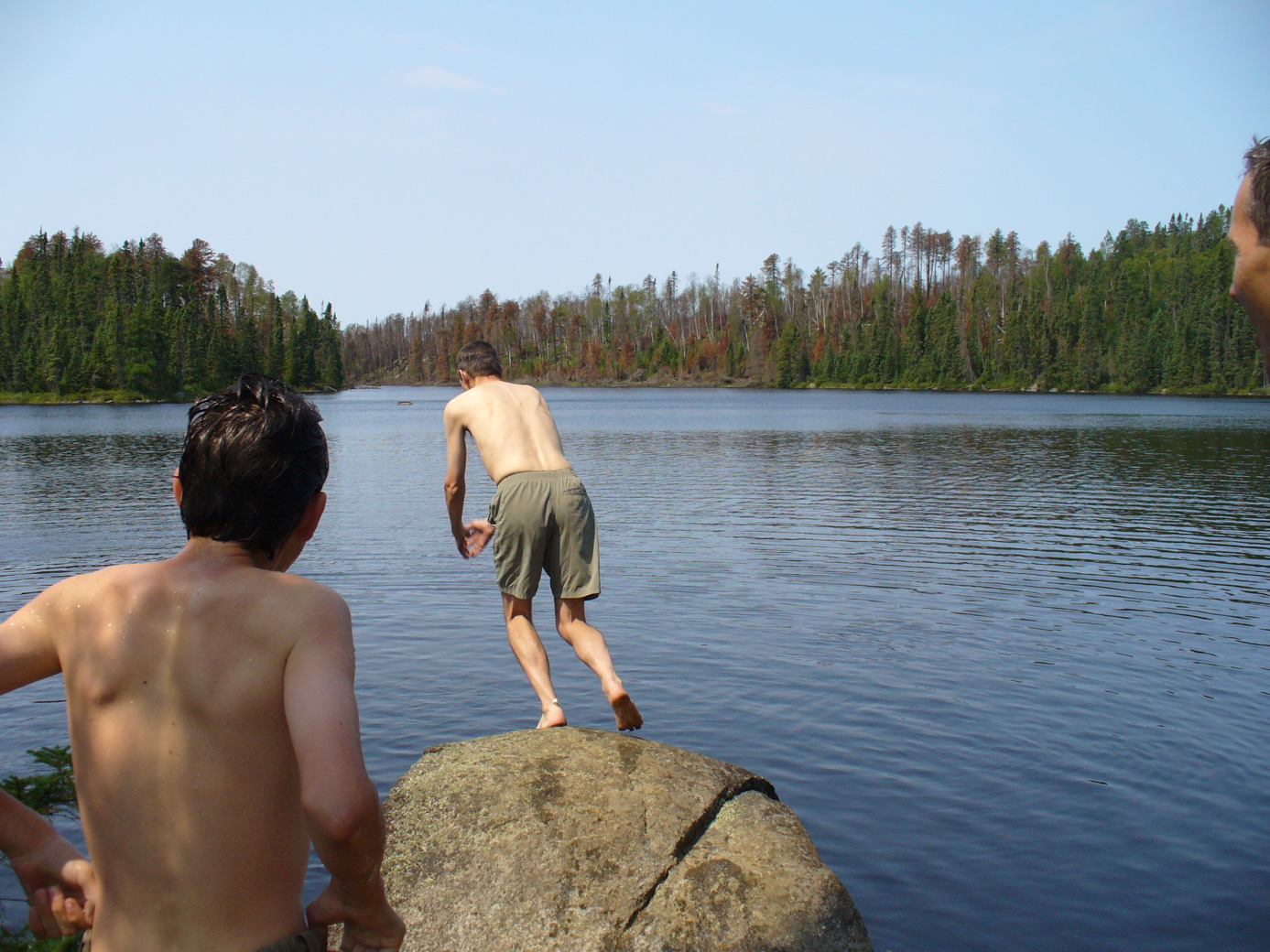 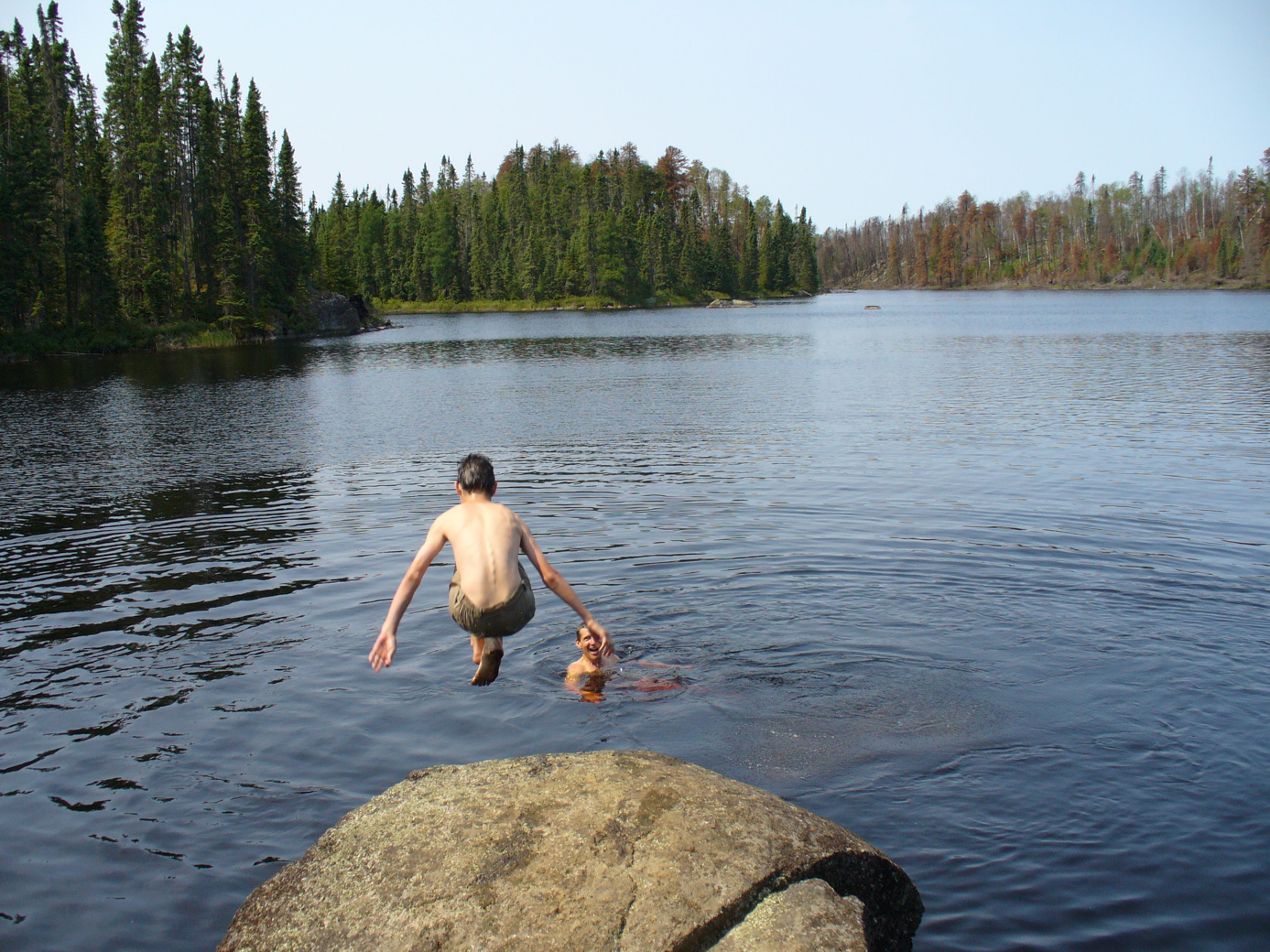 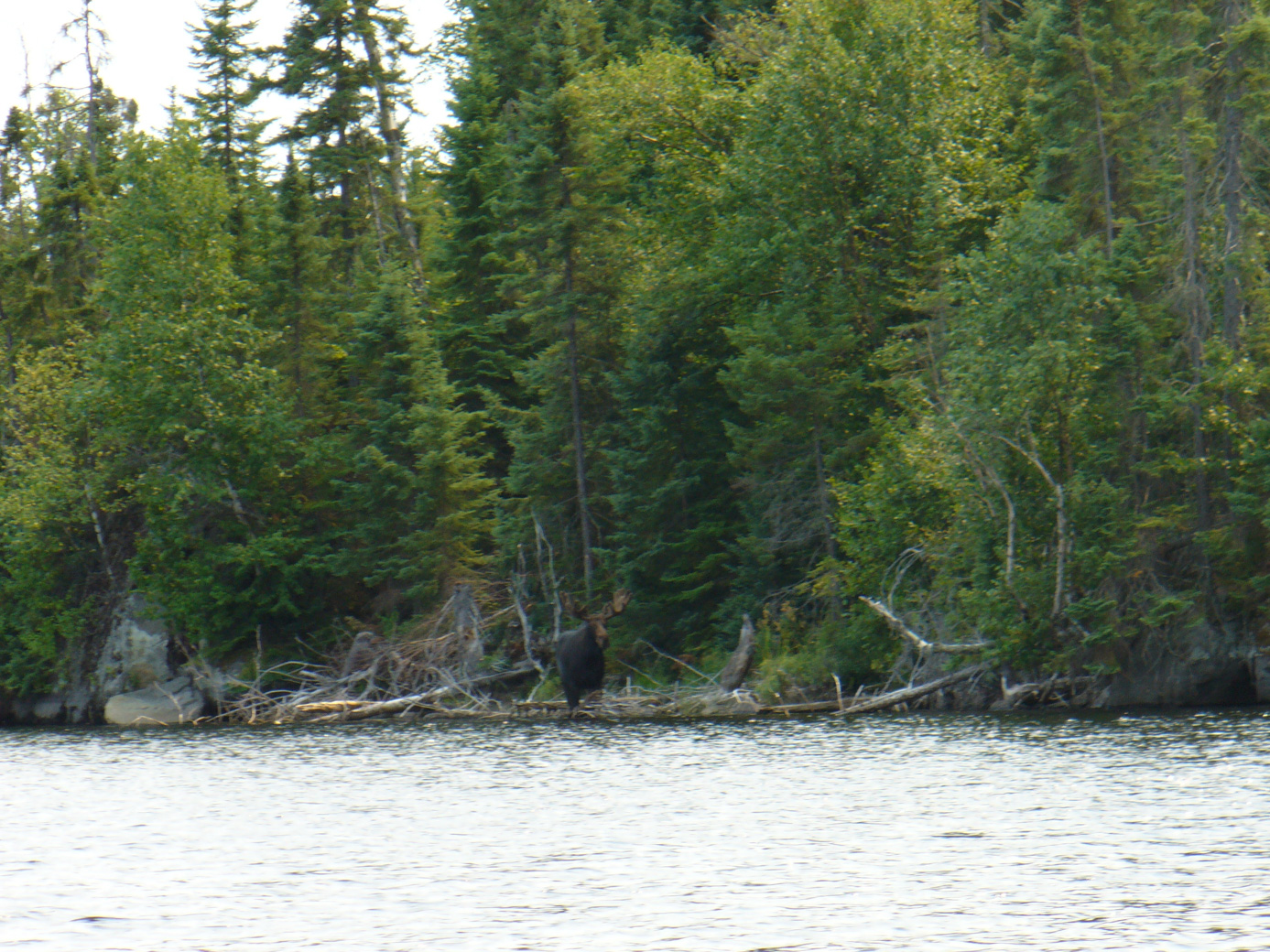 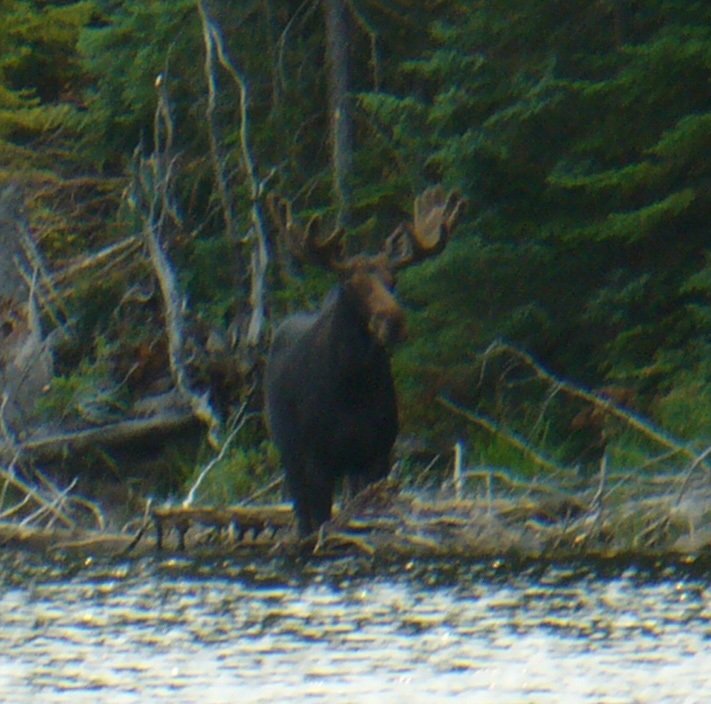