The Manahan Family Reunion (version 2006) was held in early August, in Maine.

On our way up, on Saturday, we were able to stop in Lewiston to spend some time with Mom and Gerry. We met Cori, Jeremy, Nicky, and Keagan for supper Saturday night. Then Sunday we went to Uncle Moe's for the famous blueberry crepes. This was Paul's 1st opportunity to eat there. Some pics from our Lewiston trip: 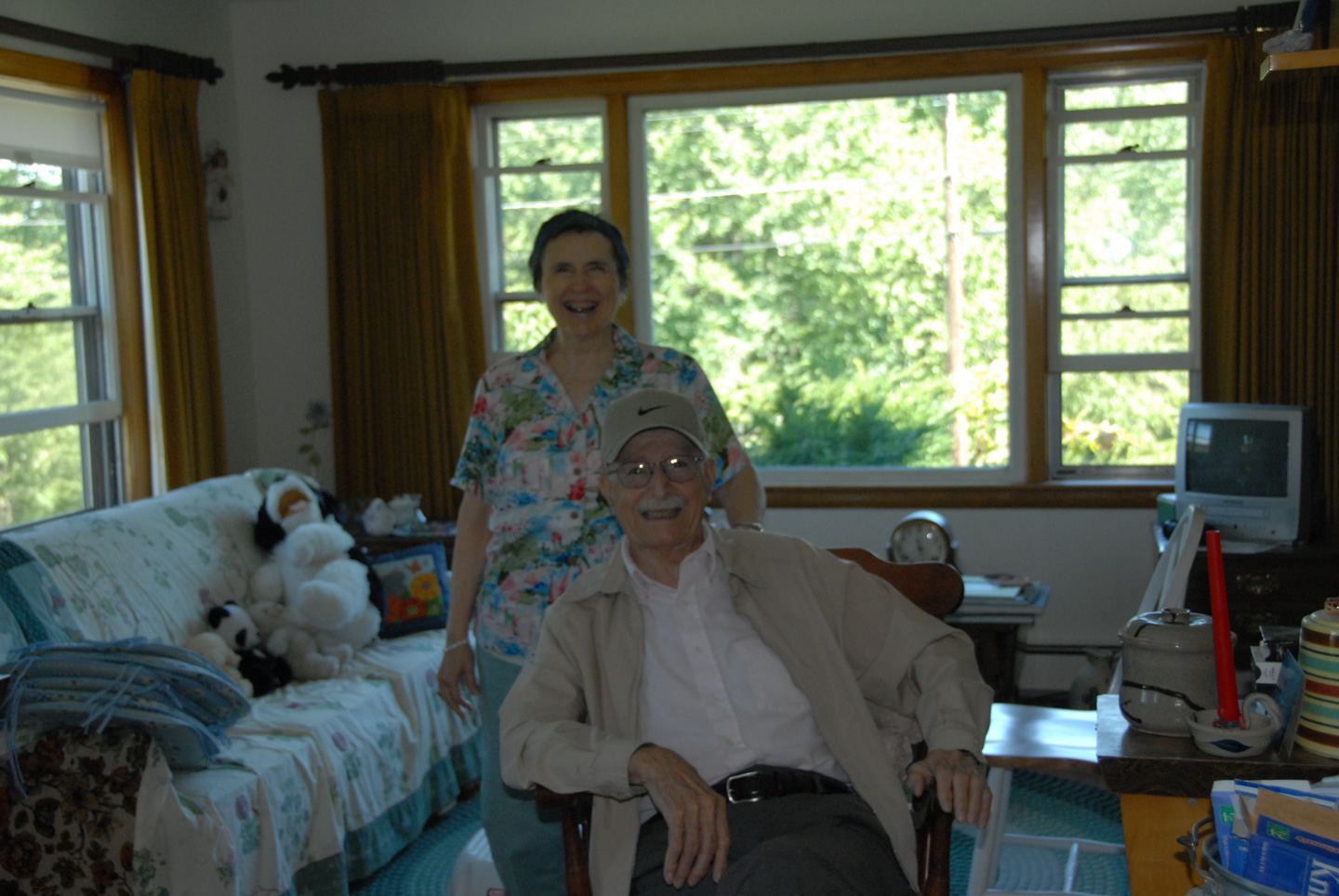 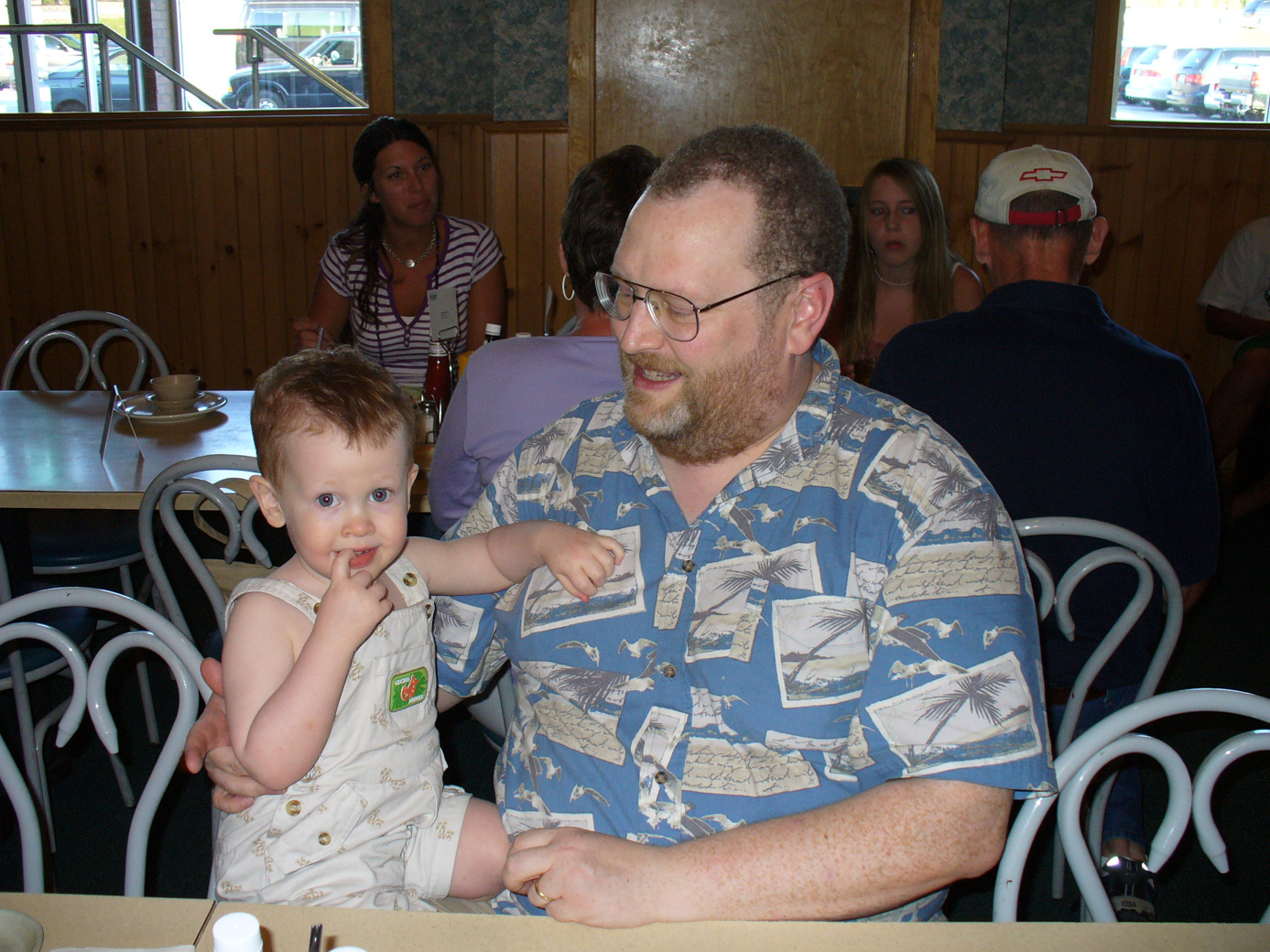 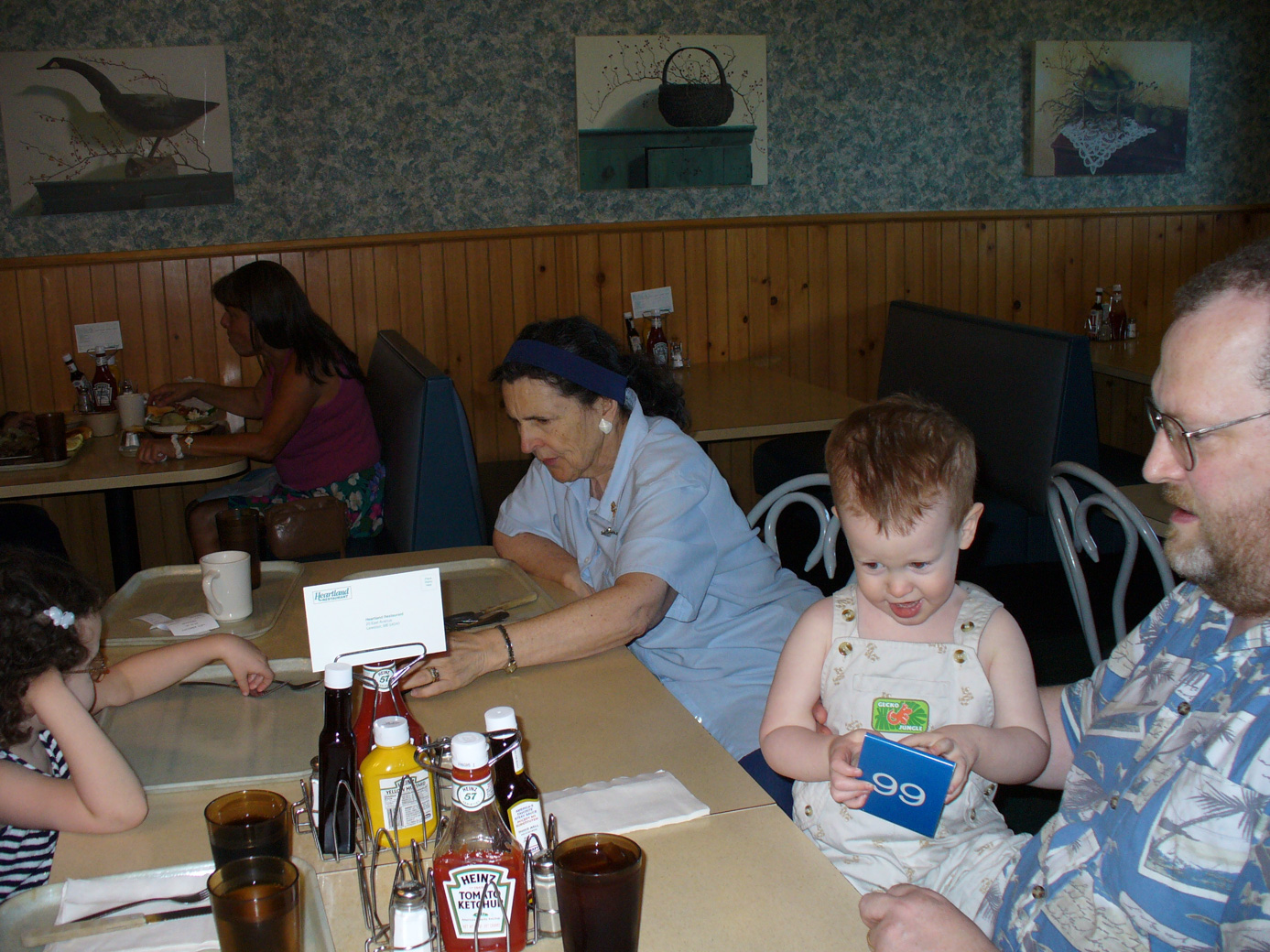 The location of this year's reunion was Bar Harbor, Maine. We stayed on campus at The College of the Atlantic (also known as COA). Yes, we stayed in dorm rooms. The beginning of the week was a little tiring, but it was easier to sleep as the week went on and everyone settled into a bit of a routine.

We ate in the school cafeteria. The food was decent. Not gourmet, but a great variety and they did well at accommodating various dietary restrictions (such as our vegetarian request). We enjoyed the meals. And they even provided bag lunches on request. Here are pictures back up to the cafeteria / library from near the water, of the administrative building called Turrets, and the other side of the cafeteria building: 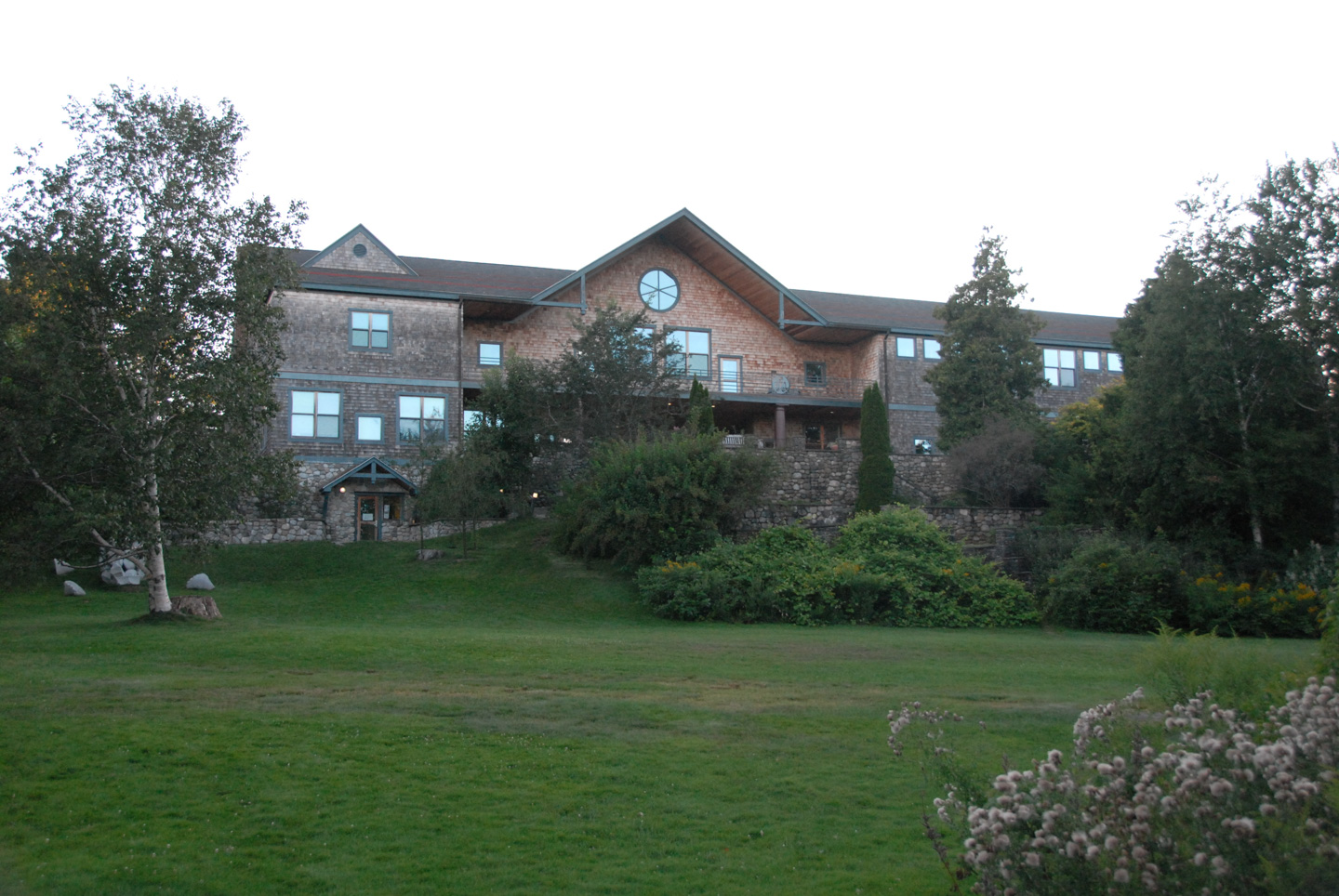 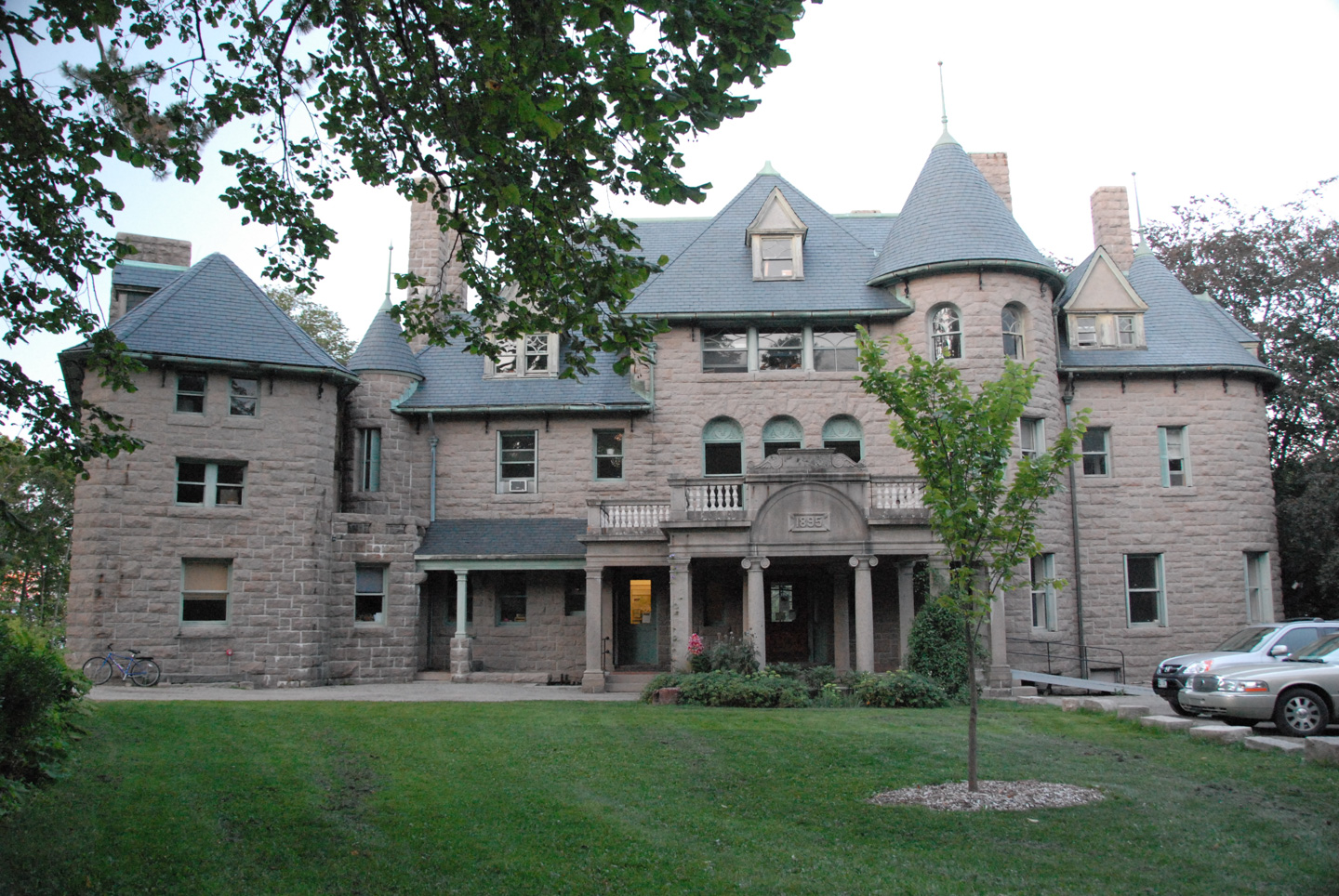 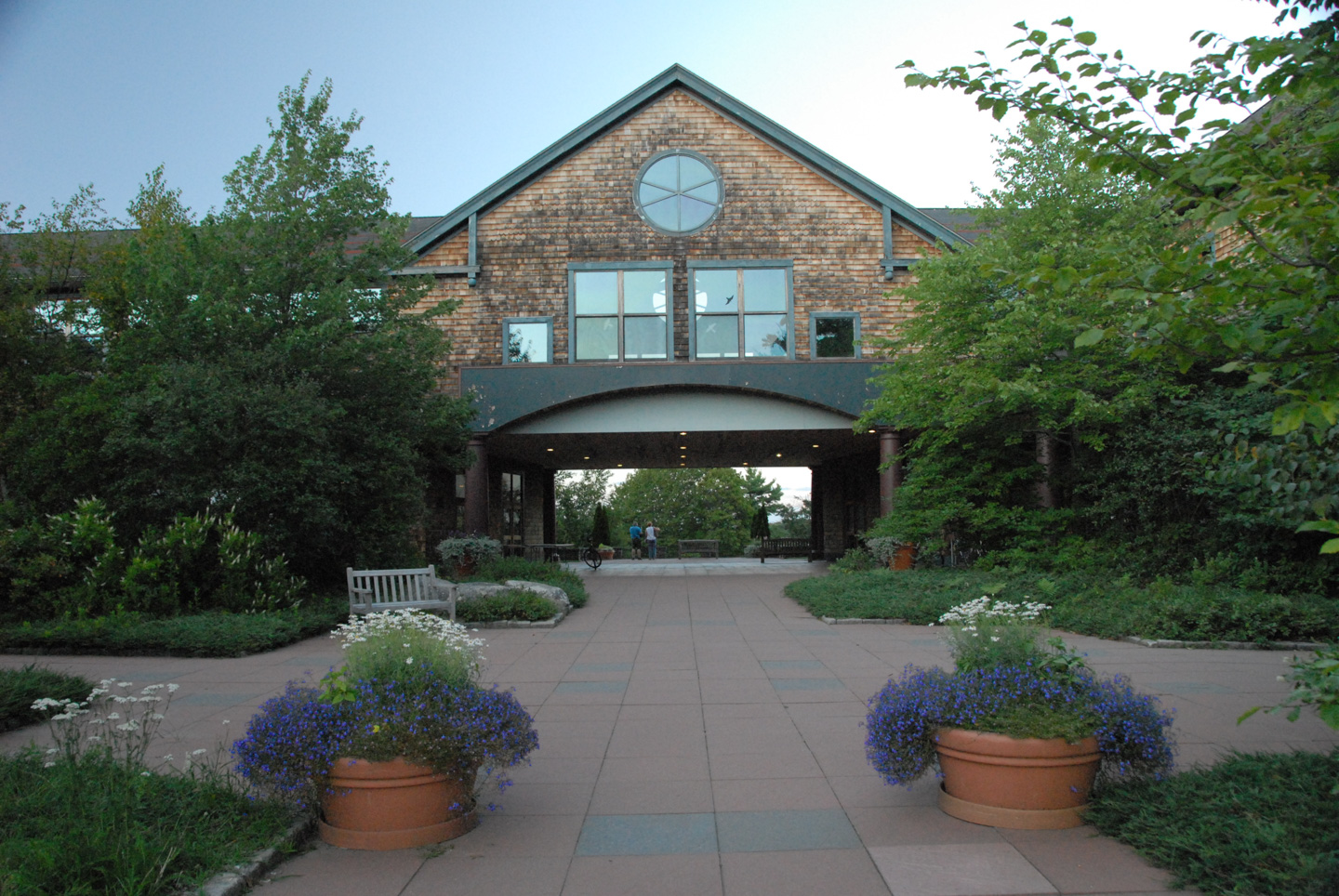 On of the highlights of the week was the Irish Murder Mystery / Birthday Celebration. Matt, Kelly, Emily, and Jimmy put this together (was well as being the overall organizers for this reunion). The murder mystery was an excuse to celebrate the milestone birthdays that happened this year. Everyone sent in "gold nuggets" about the birthday people, which were given to them at the end of the mystery. Parts were pre-assigned, and everyone was expected to come in costume - which they did! You've never seen that much green in one spot. 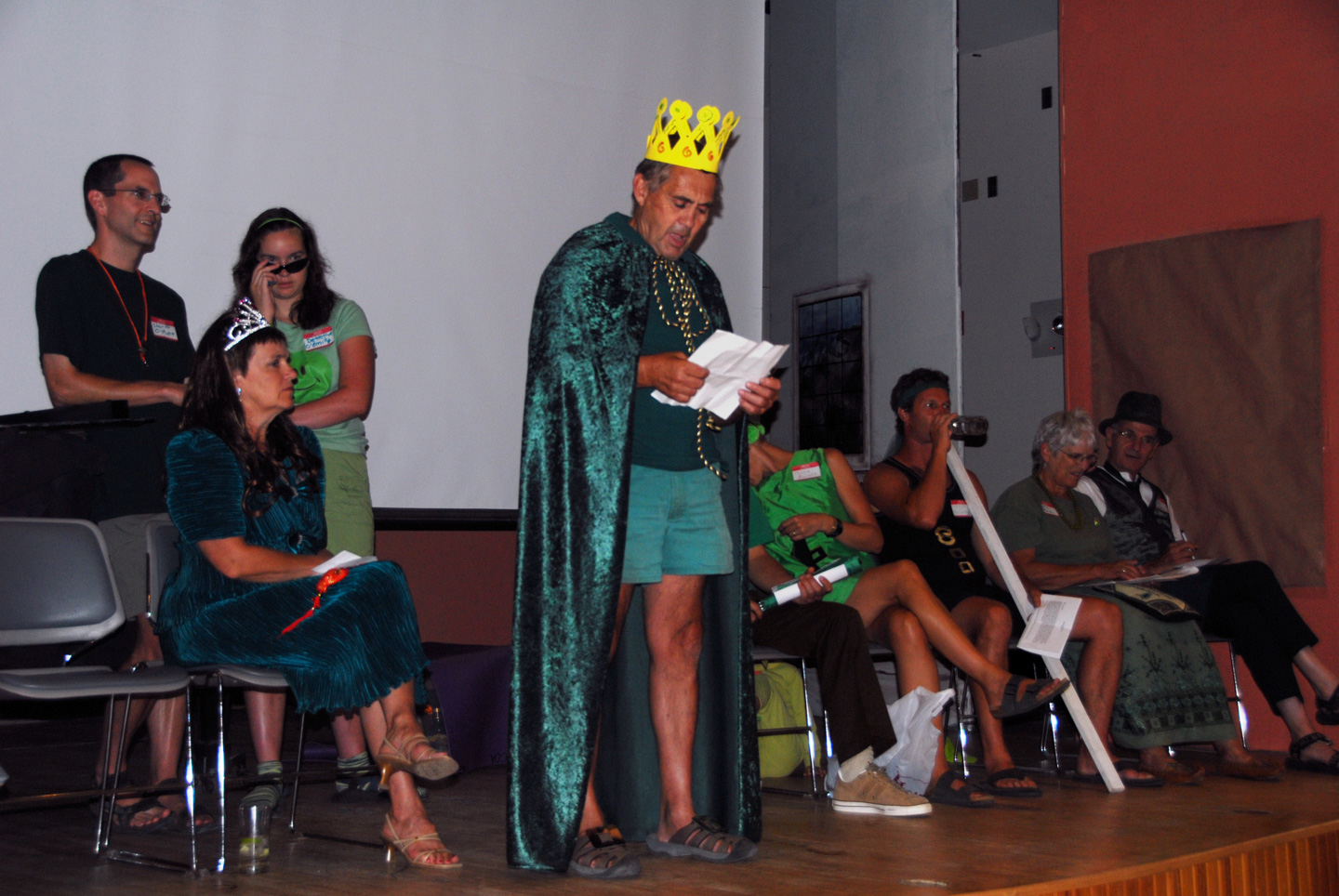 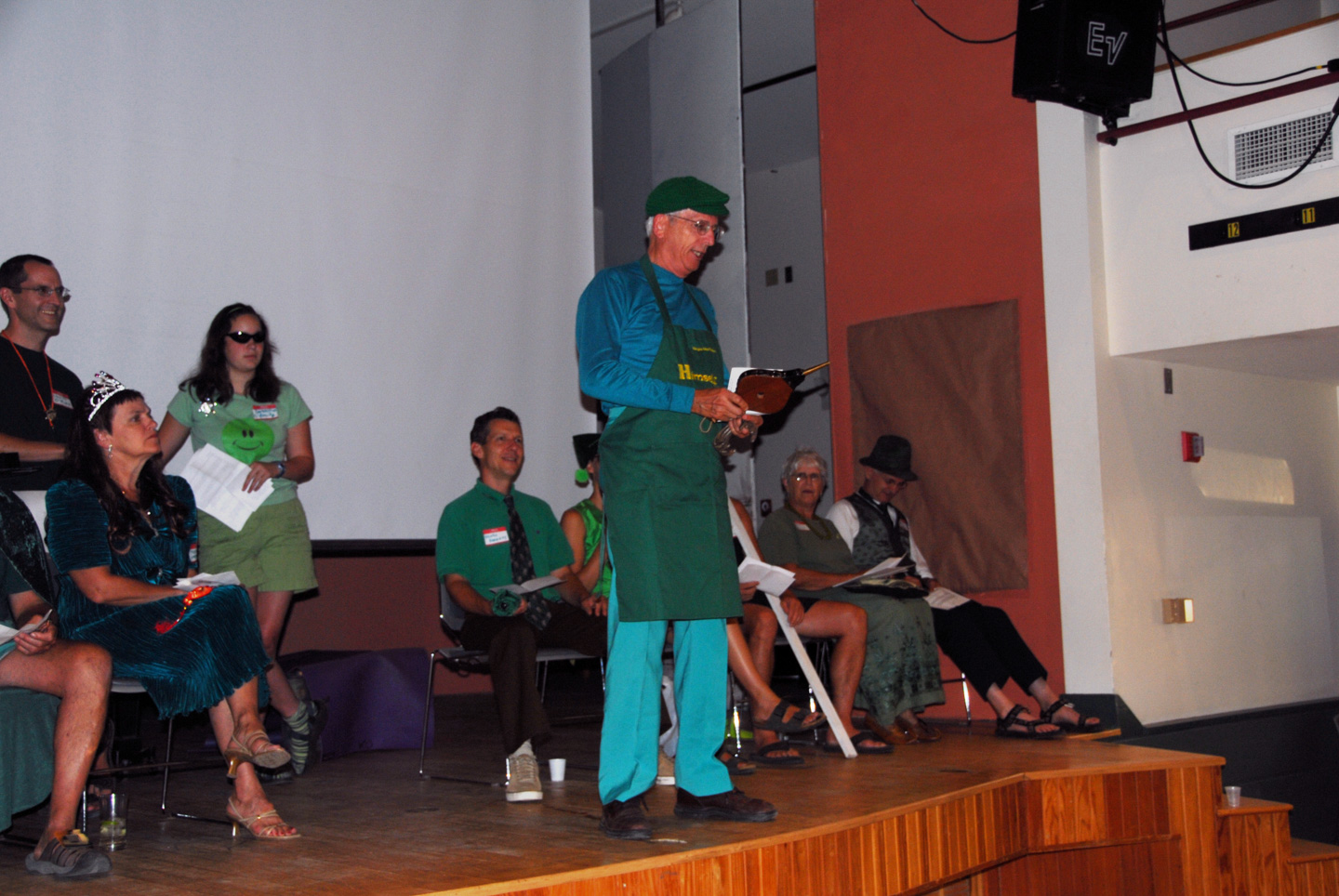 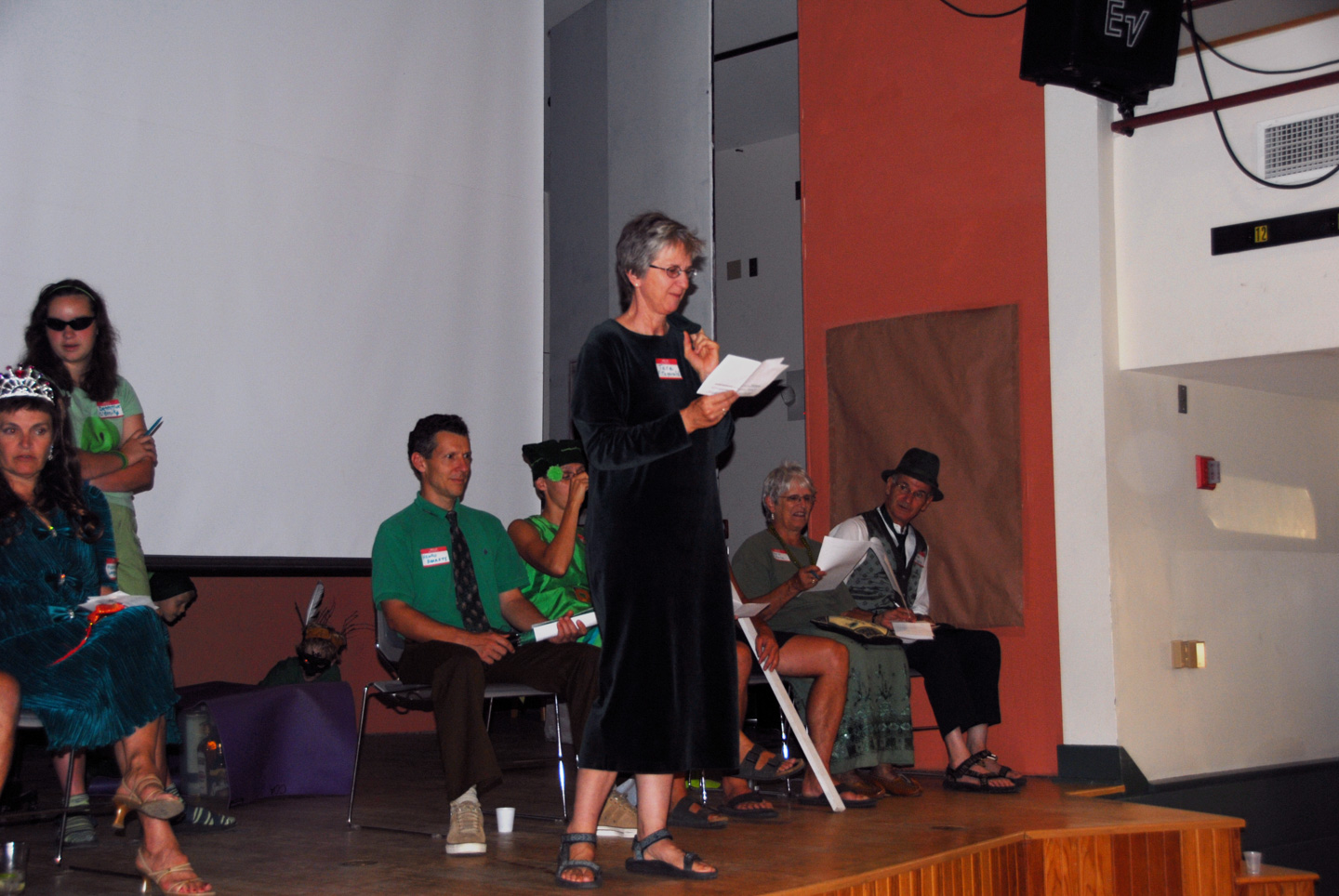 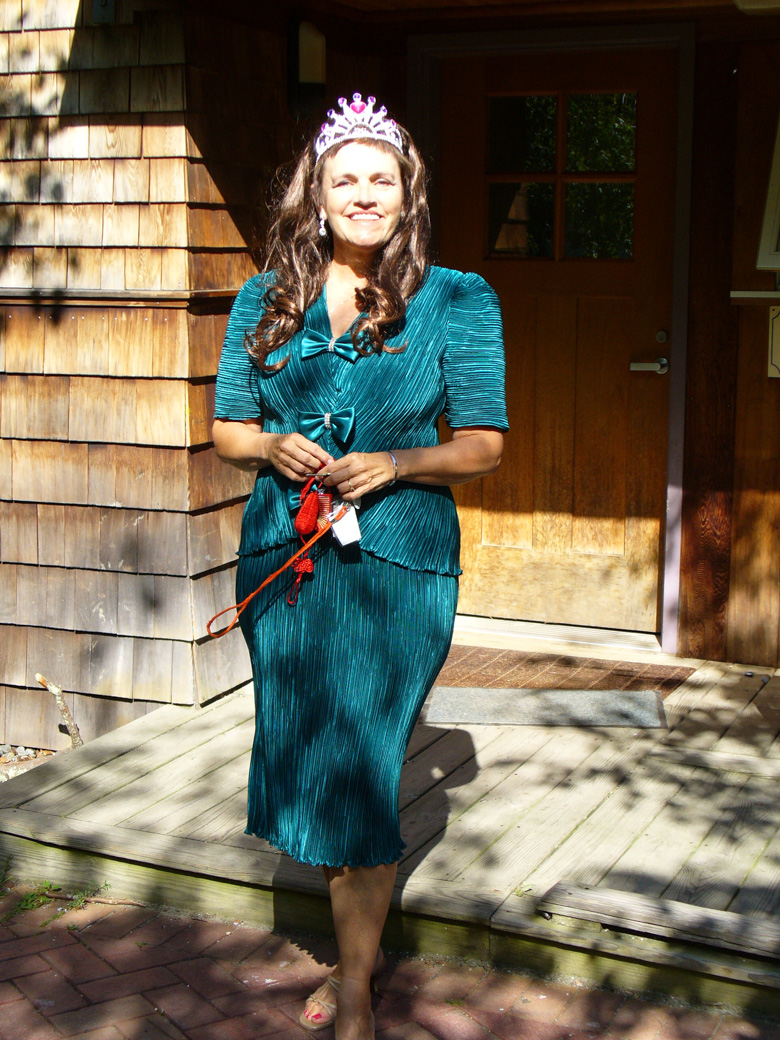 Steve and Vanda were the King and Queen of the big people. Jim was the blacksmith (note the bellows and ultra-cool custom apron). Nancy was a custom sweater knitter. A quick summary of the plot line was that the Leprechaun king's pot of gold was stolen and the goldsmith of the big people's king was killed.

Our costumes are shown in this picture. Paul was the leprechaun king who's pot of gold was stolen. I was the daughter of the cobbler. Note the fabric of Steve's cloak and the fabric of Paul's cloak: the exact same fabric, bought at stores 1400 miles apart. Also - notice that I have green shoes on. 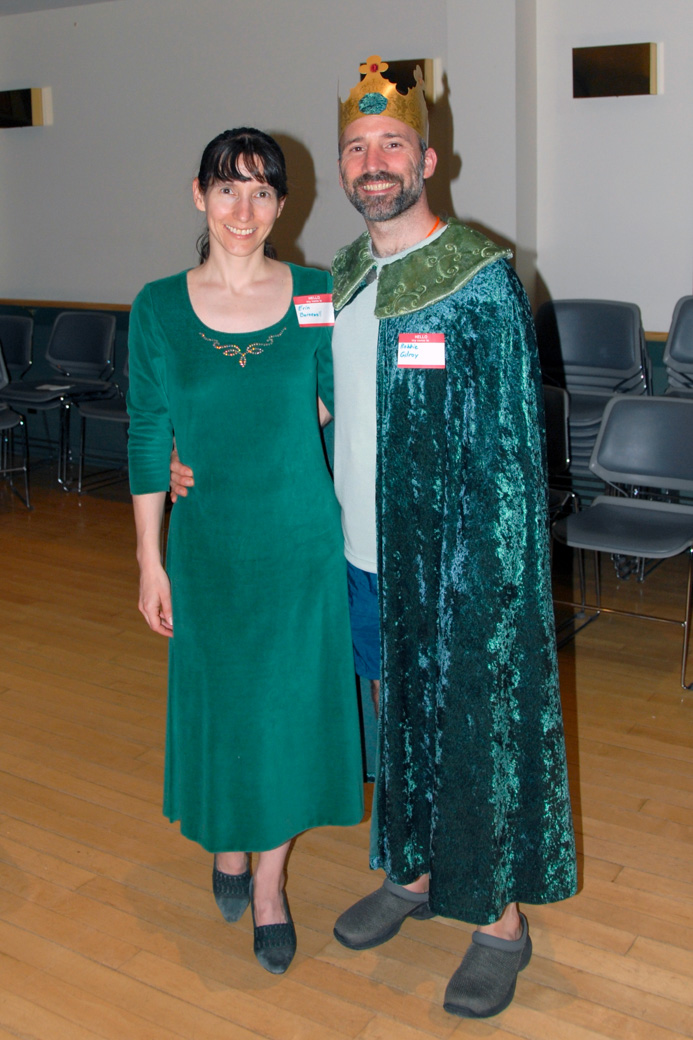 Some of the other outfits will be shown on the next page ...