Back in 1620, Pilgrims came over on a ship called The Mayflower.  A recreation of the ship was created, Mayflower II, which is now part of the living museum Plimouth Plantation.  On Monday June 6th, it was brought back from the winter dock (where it goes for a few months for repairs) to Plymouth.  The ship is towed back with a tug boat.  We found a link to a marine site that tracked the tug, Jaguar, and allowed us to follow the progress of the boat.  Paul took advantage of the Mayflower II being out on the water, and took pictures of the ship on its way into the Cape Cod Canal, at the other end of the canal, and later when it came into Plymouth Harbor.

Here are some pictures, starting with the Canal entrance and going underneath the modern railroad bridge (obviously in its lifted, or up, position to let the tall Mayflower through): 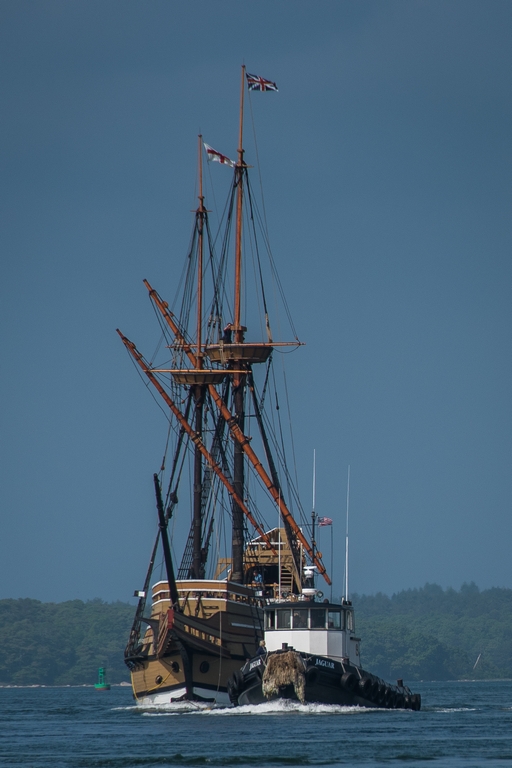 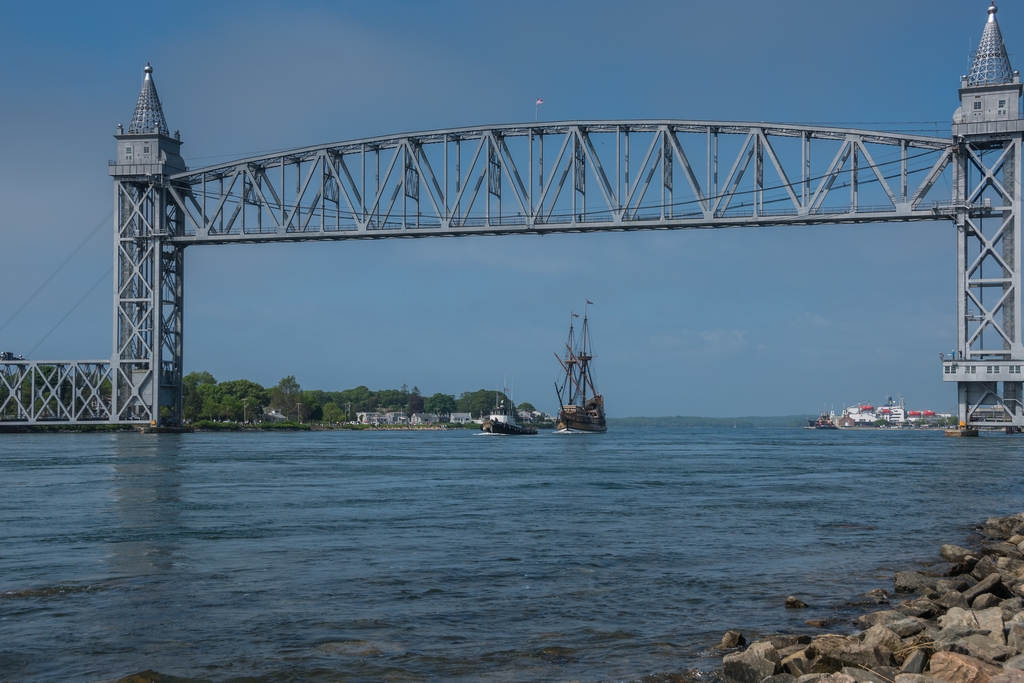 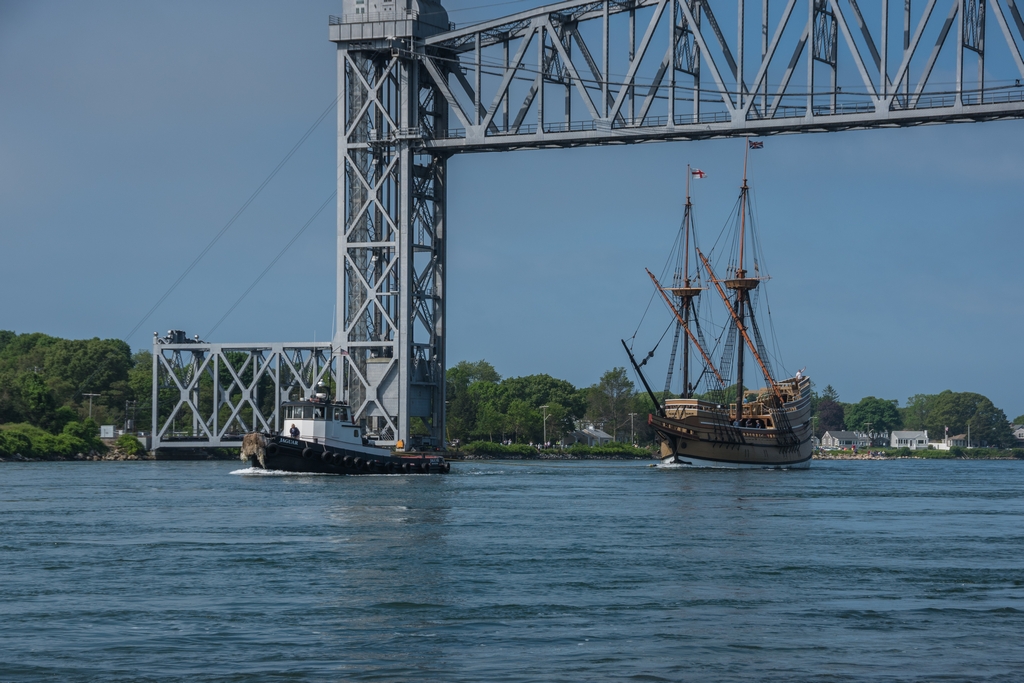 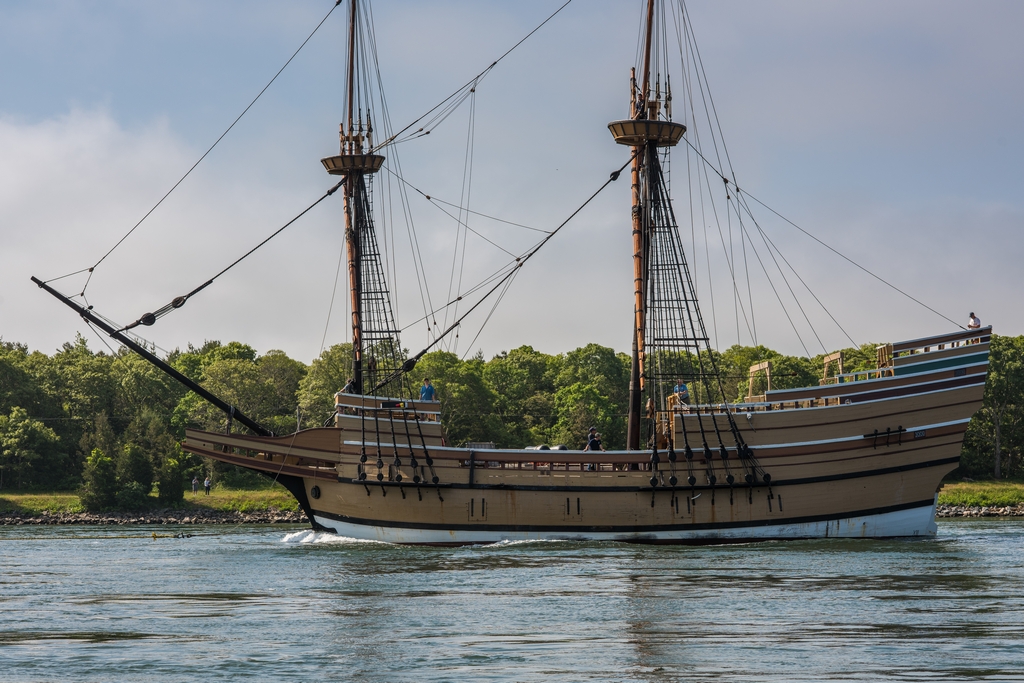 This is now at the other end of the Cape Cod Canal, with the Sagamore Bridge in the background: 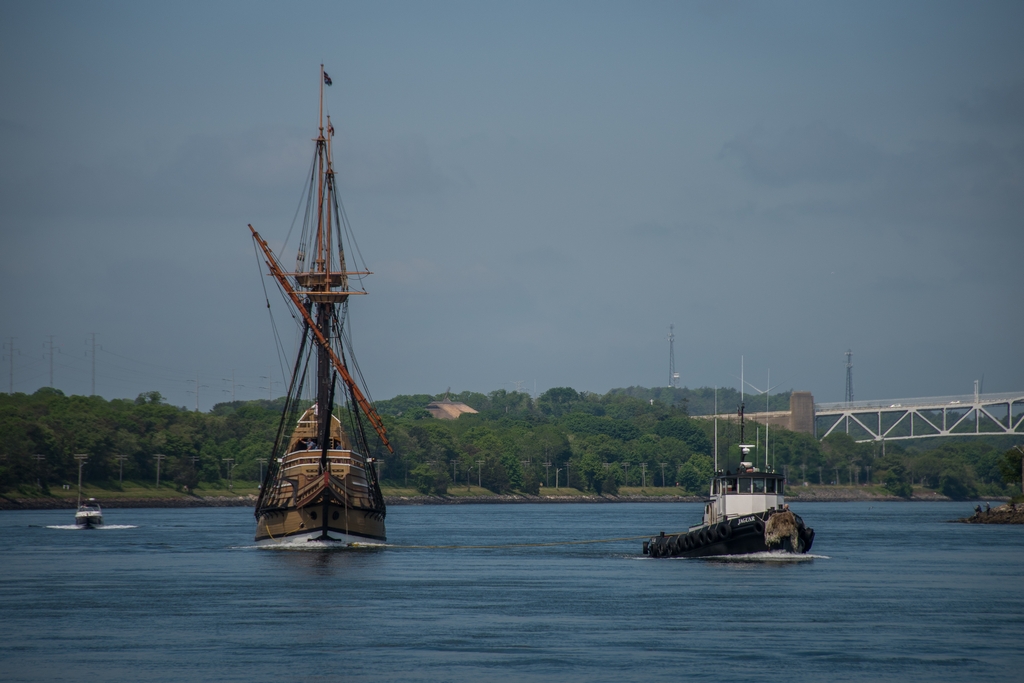 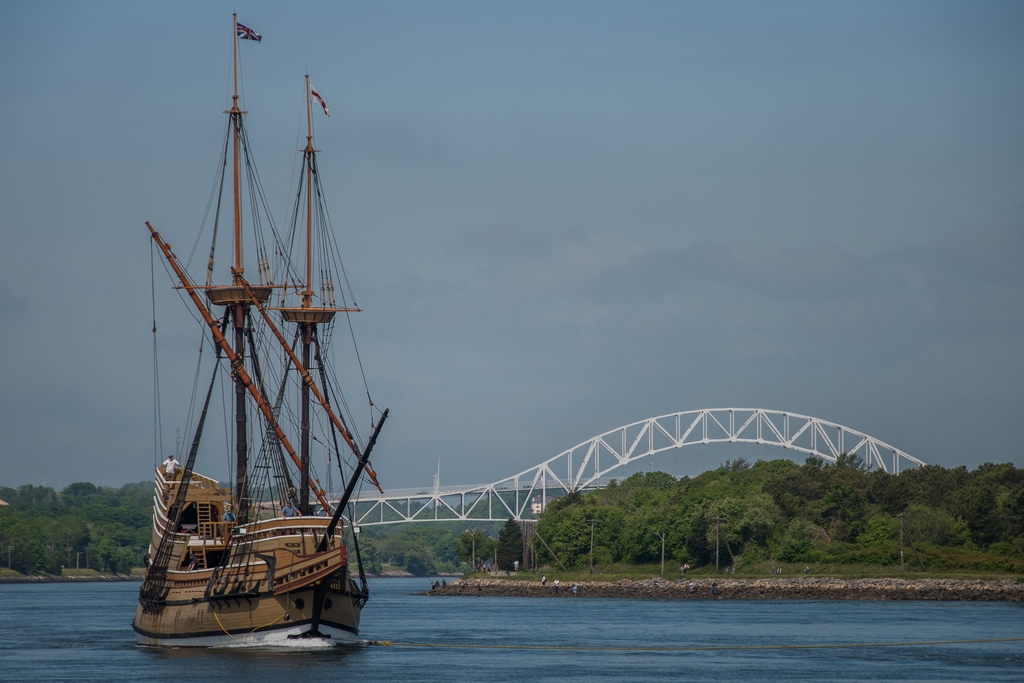 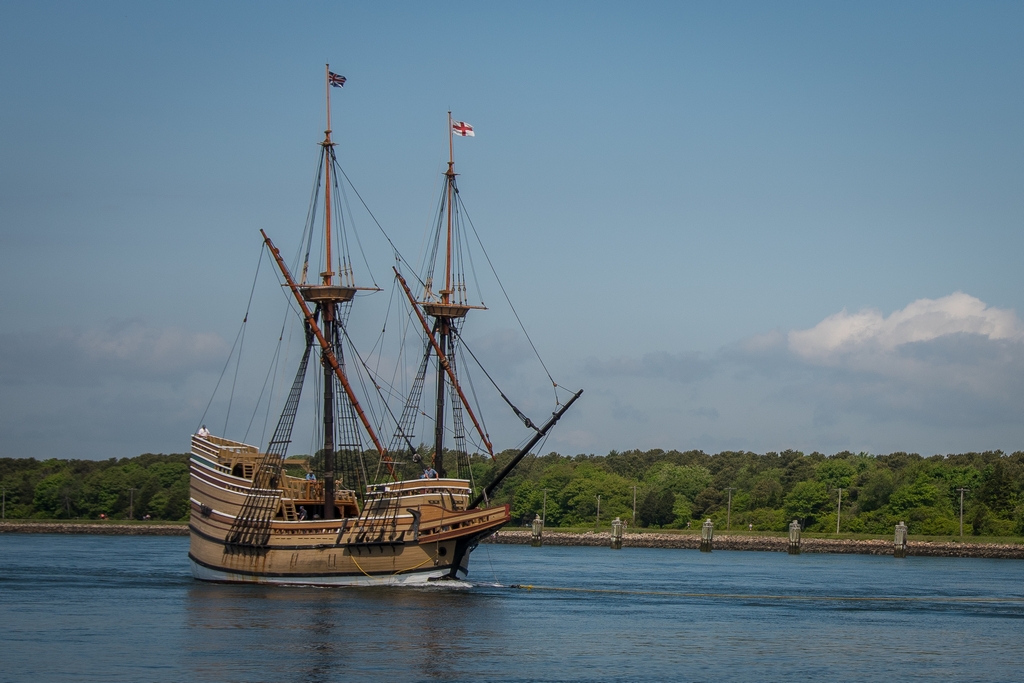 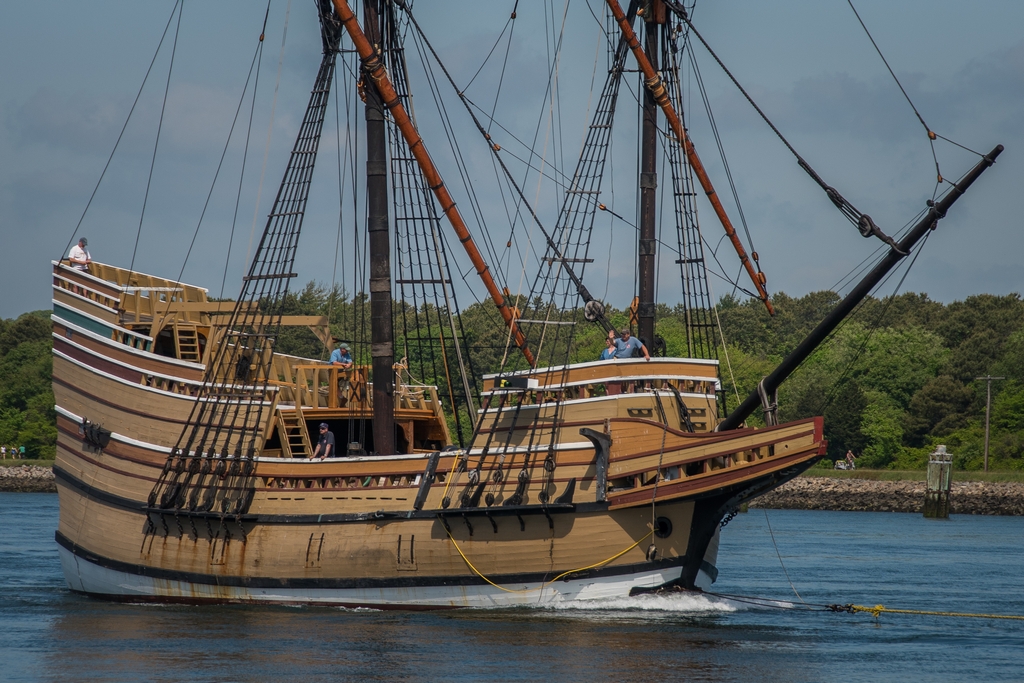 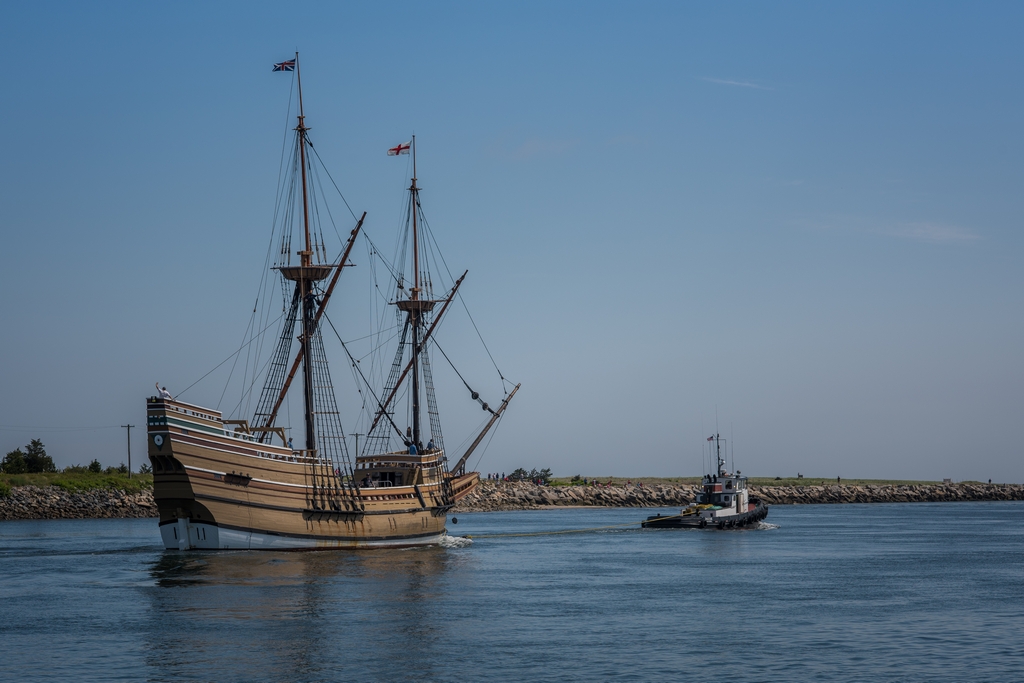 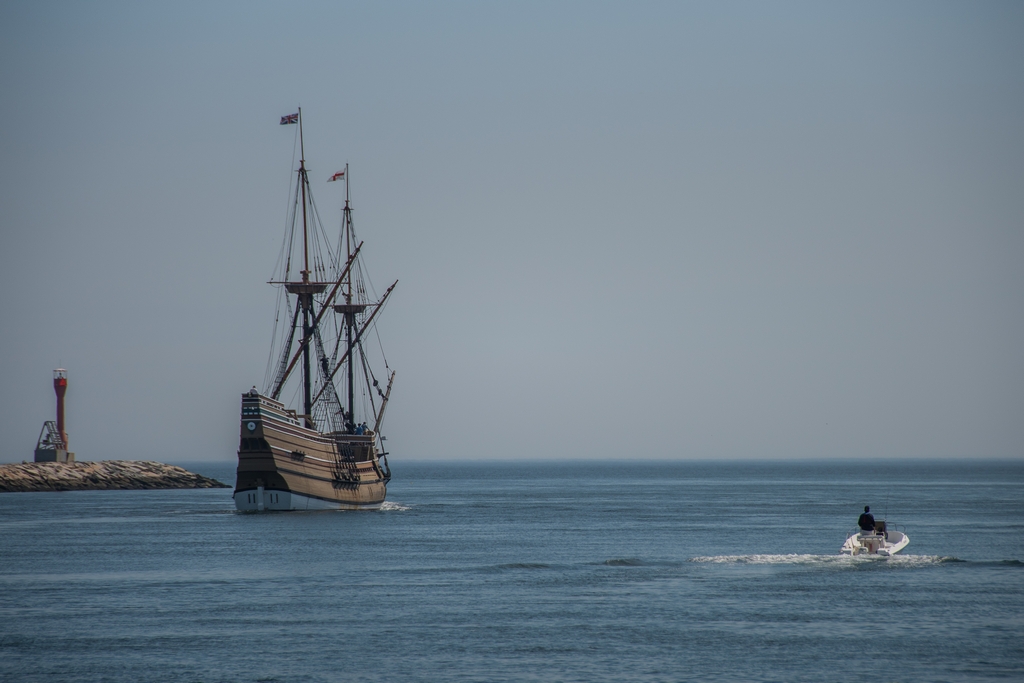 In this next picture, the tugboat Jaguar has already rounded the corner (you can just see it over the rock breakwater).  The churned water between them is caused by the rope hitting the water as it moves sideways. 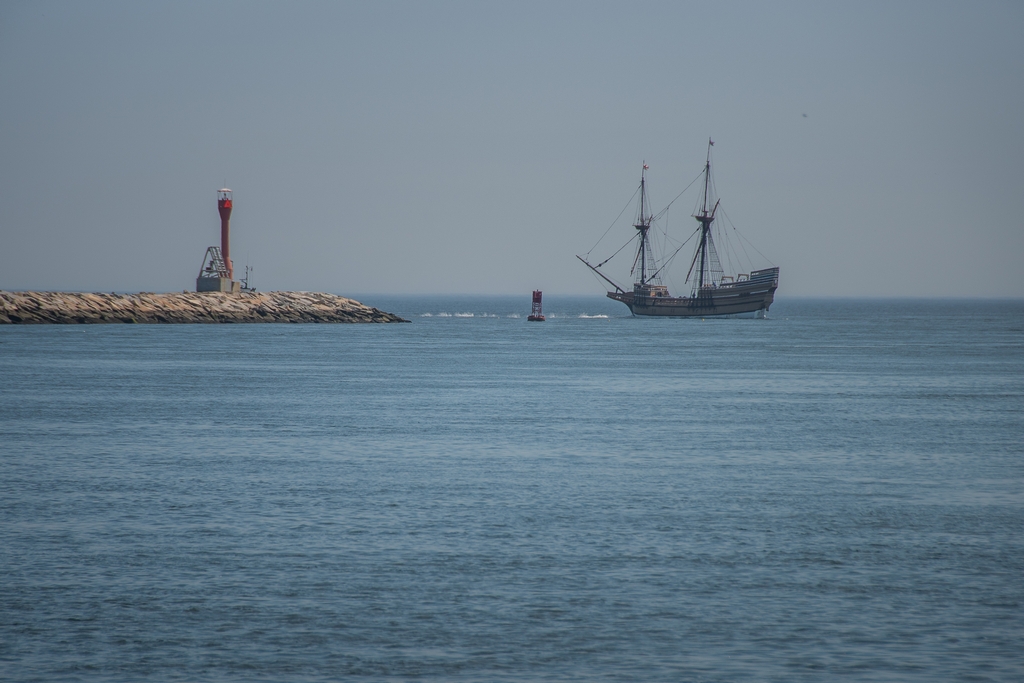 A quick break with this expansive scene of the Plymouth Harbor. 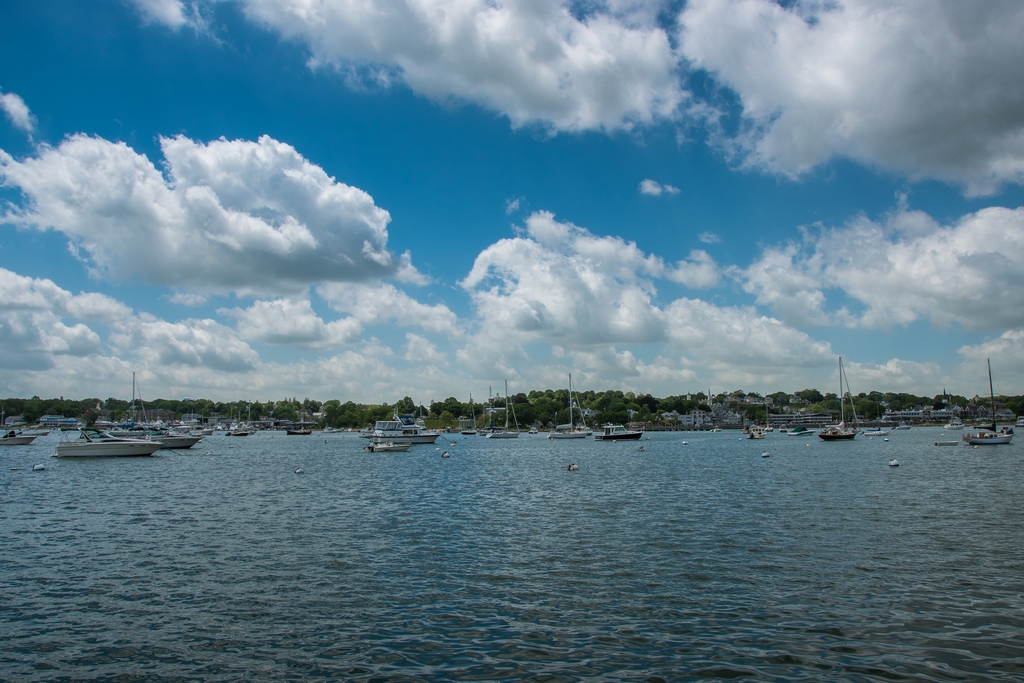 And now back to the Mayflower, including people out to see it coming in.  Notice that the Mayflower II is now facing the other direction.  It is being brought into the harbor backwards.  The tug boat is strapped to the ship on the far side. 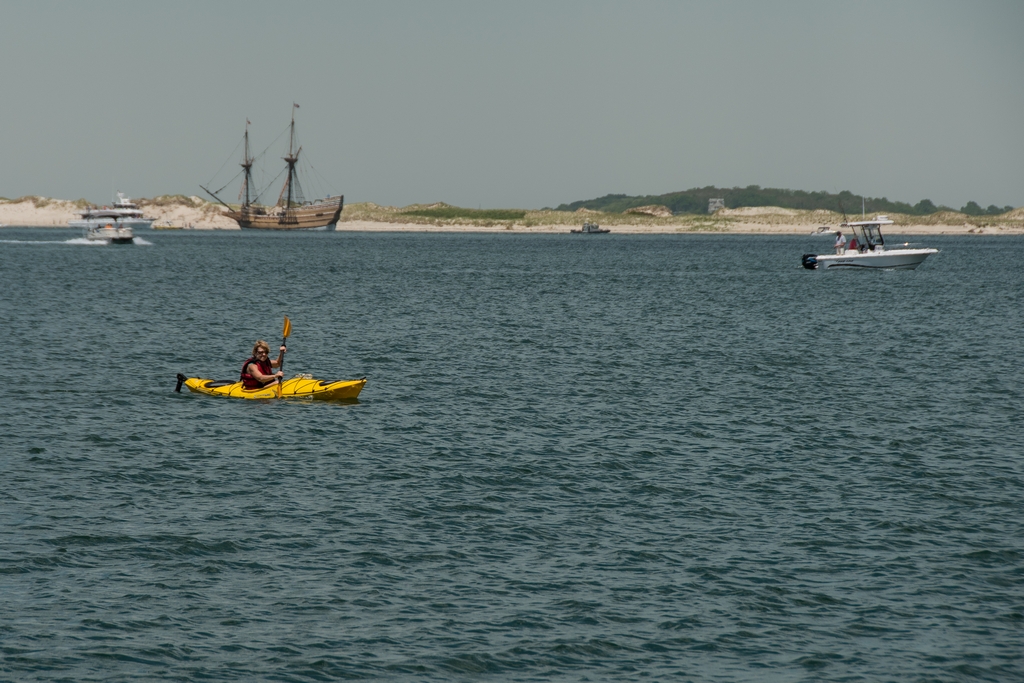 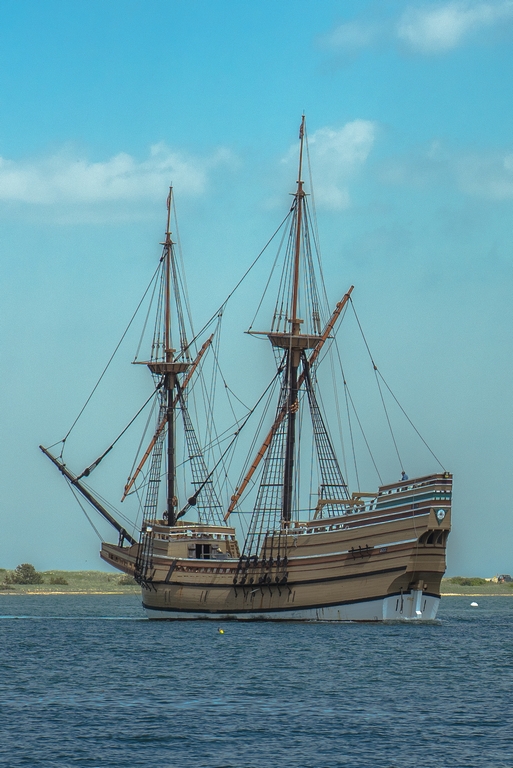 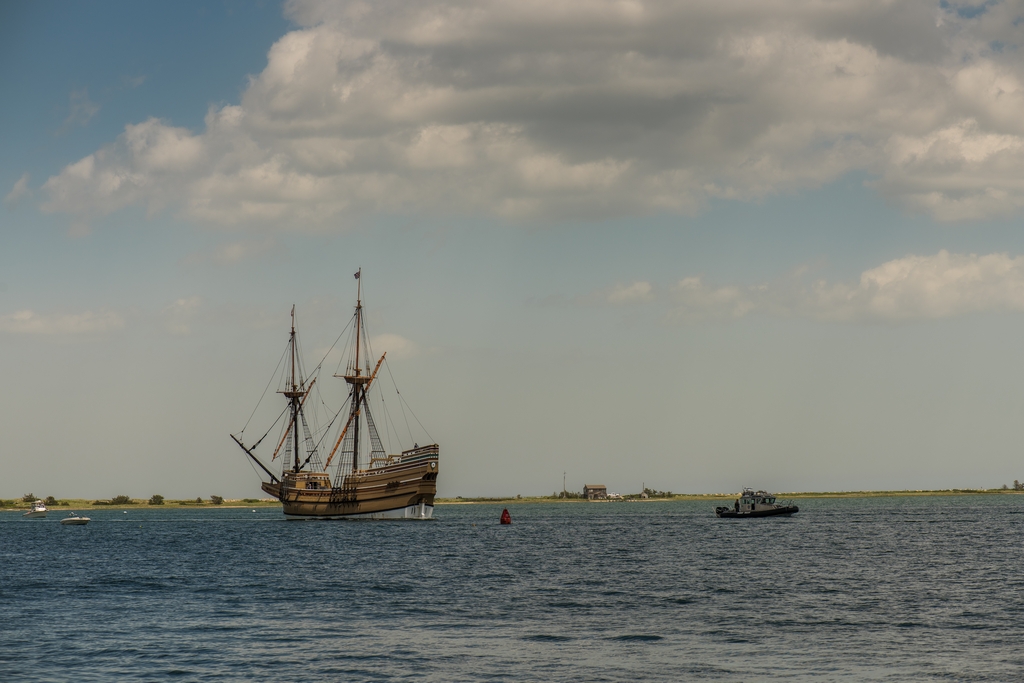 In these next two pictures you can see the tug on the other side of the Mayflower: 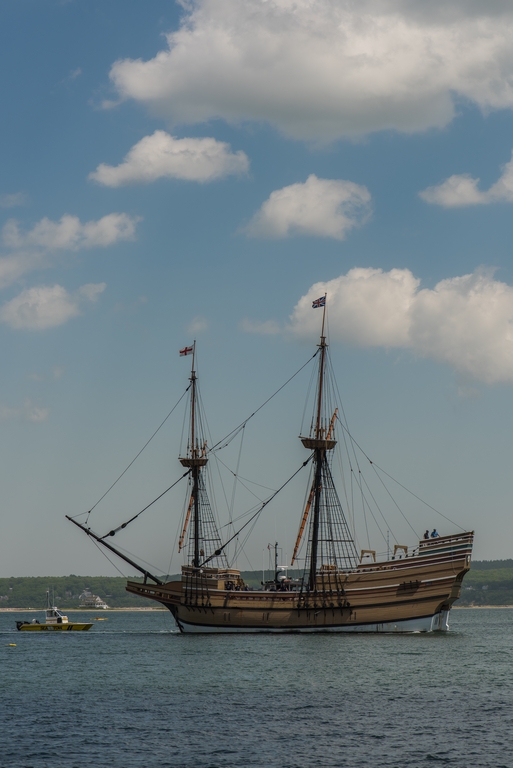 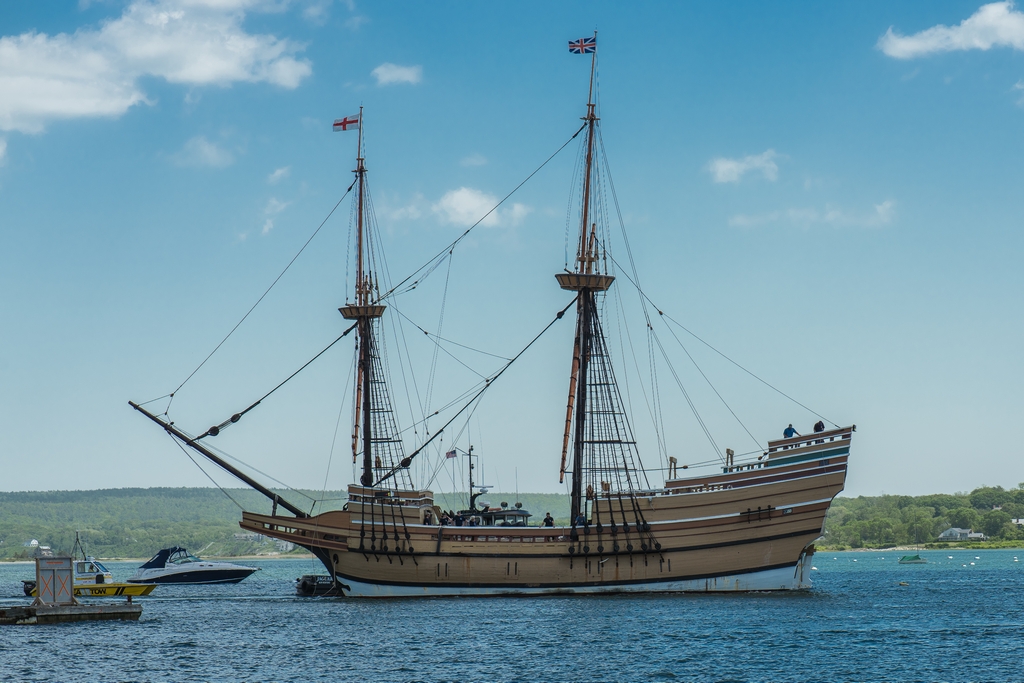 This picture is a bit busy, but just to the right of the Mayflower is portico that is surrounds Plymouth Rock .  (Plymouth Rock is a national park monument that you really need to see during the season so you can talk to a park interpreter there.  By itself it is abit uninformative, but with the added information it can be fascinating.)  Although you won't be able to tell in this reduced-size picture, the little speck that shows in the picture above the church's cross is a drone. 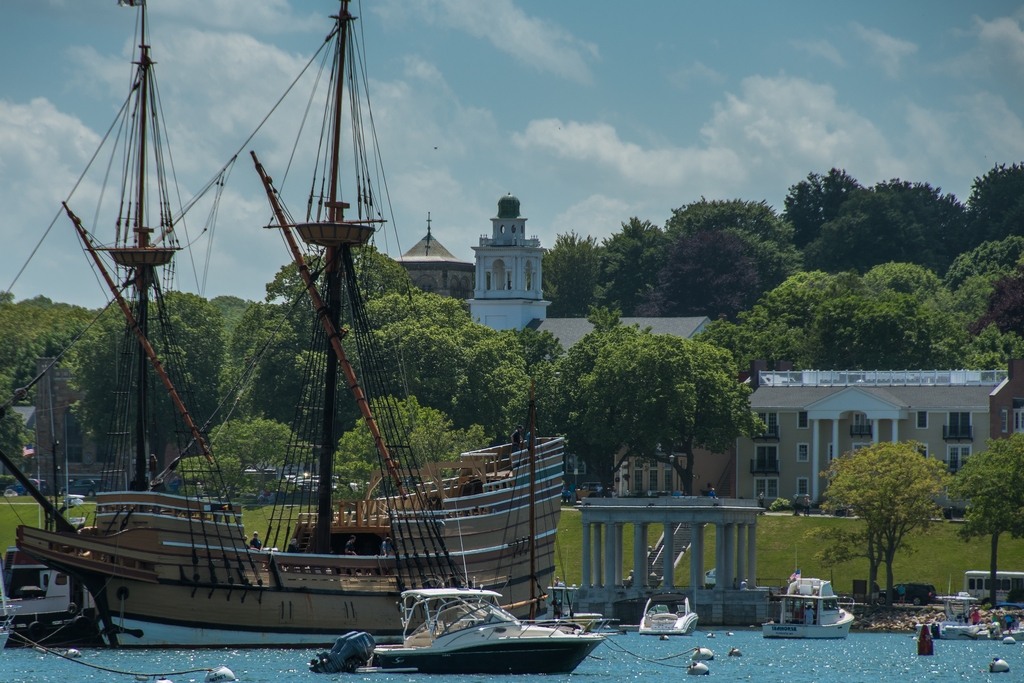 Since that last picture was a bit cluttered, here is a final clearer view of the ship from back in the Cape Cod Canal: 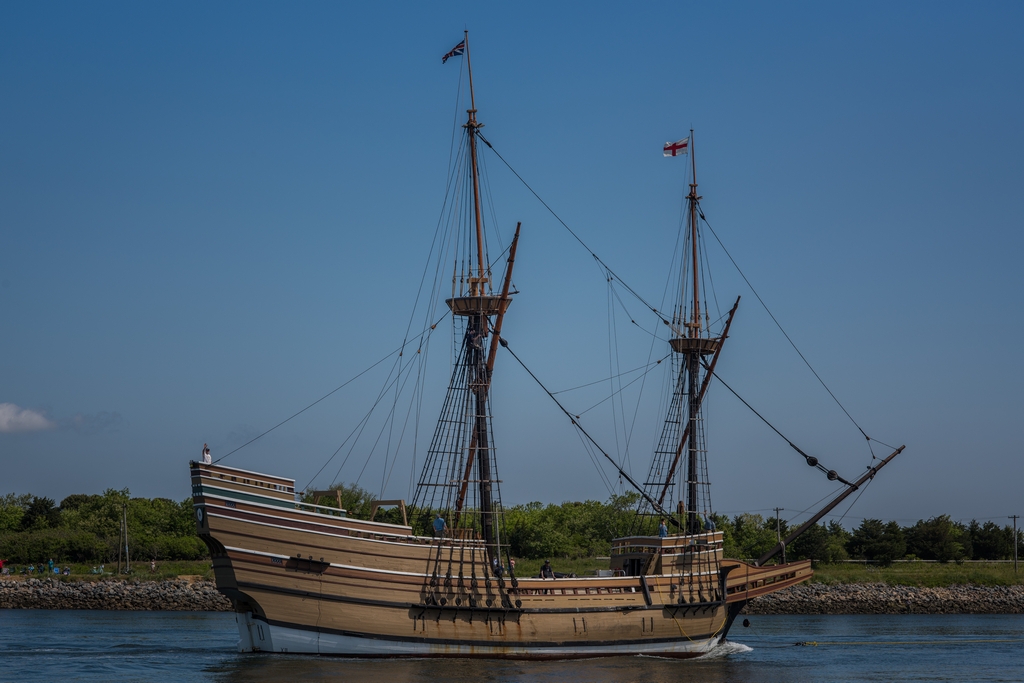