Weather forecasting is so much better now than it was in 1978.  Not that they always get it right, but the forecasters gave us warning of this blizzard and we - plus everyone else in the impacted area - had a chance to take precautions and get ready for it.  Here is a chronology of how the blizzard impacted us, mostly written by Paul, along with some pictures we took after the storm.

The blizzard of 2013 starts to slowly approach.  All schools were canceled and many business' adjusted their plans.

After lunch snow starts to be more significant and slowly starts to accumulate.  For us it is very wet heavy snow and is sticking to everything it comes in contact with.  The Governor announced a ban on motor vehicle traffic after 4pm.  The "T" stopped as of 3:30pm.

Anne and I go out and shovel all that snow - hard work with the snow whipping into our faces.  We wanted to get rid of this heavy stuff before colder temperatures arrive (which will thankfully make the snow lighter).  At 7:30 I go back down to care for Scout.  We almost have another 4 inches of snow already; it is hard to see our work.  The trees are very noticeably drooping.  I could hear branches snapping from all directions.

As a precaution we removed some items we would want from the refrigerator and put them in a cooler in the basement with ice packs.  This way we can keep the temperature in the refrigerator colder, longer.  At 8:30 PM our power starts to flicker, and by 9 it goes out completely.  I had all our camping gear and lanterns ready for use.  We go to bed at 10 PM, and try to sleep.  The wind is howling, literally whistling at our windows, and branches are rubbing against the house.  It is hard to sleep. 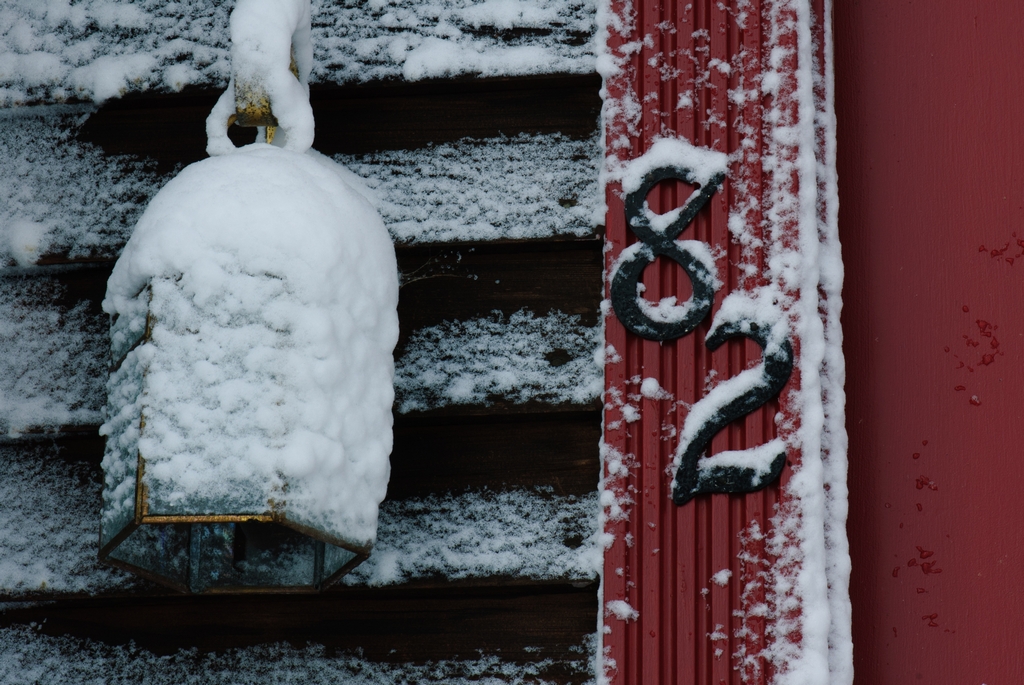 By 2 am winds have shifted to the northeast/north.  Branches no longer rubbing against the house, however occasional whistles of the wind continue.  We get up about 6:30 AM.

I trudge down to the barn through a foot and a half of snow to care for Scout.  He is fine.  The house and barn are undamaged.  I see many snapped branches all around.  Anne calls local power company and they tell us to plan on 2 days.  She is told 3/4 of Middleboro and 3/4 of Lakeville are without power.  (This is their entire serving area.)  They have 7 down transmission points, and 1 high tension line to NGRID is down.

Using camping stove we have hot coffee/tea and oatmeal for breakfast.  It is still snowing outside, but lightly.  The winds have died down.  At 9am we setup and light up the wood stove.  We start cautiously because it hasn't been used in a few years and we want to be sure the flues are not damaged.  All appears fine and load up some more wood.  Little by little the temperature in the house start to creep up.  Feeling confident that the wood stove is fine we head out shortly after noon to clear the snow.  First I shovel out the basement door to enable getting out the snowblower, then shovel out in front of Scout's stall door so that can be closed.  Anne starts on the front porch and steps.  I get out the snowblower and we start as a team clearing the snow.  It was wonderful that we got rid of the wettest snow last night as what we were now dealing with wasmuch easier to handle.  Remarkably after only 2.5 hours we are all done, except to the manure pile (behind the barn).  Too many trees are down there to get through.

We leave our camping pots full of water on top of the wood stove.  This gives us on-demand hot water always available for tea or hot chocolate.  (It was better than having the microwave!)  Of course, the only reason water is available is that we are on the town water supply, and not a well.  (Wells require a pump, which require power.)  Given the extended power outage, we fill up large Tupperware containers of snow and put those in the refrigerator, converting it to an old-fashioned "ice box".  The basement temp is at 45 degrees so we are not concerned about the standalone freezer. 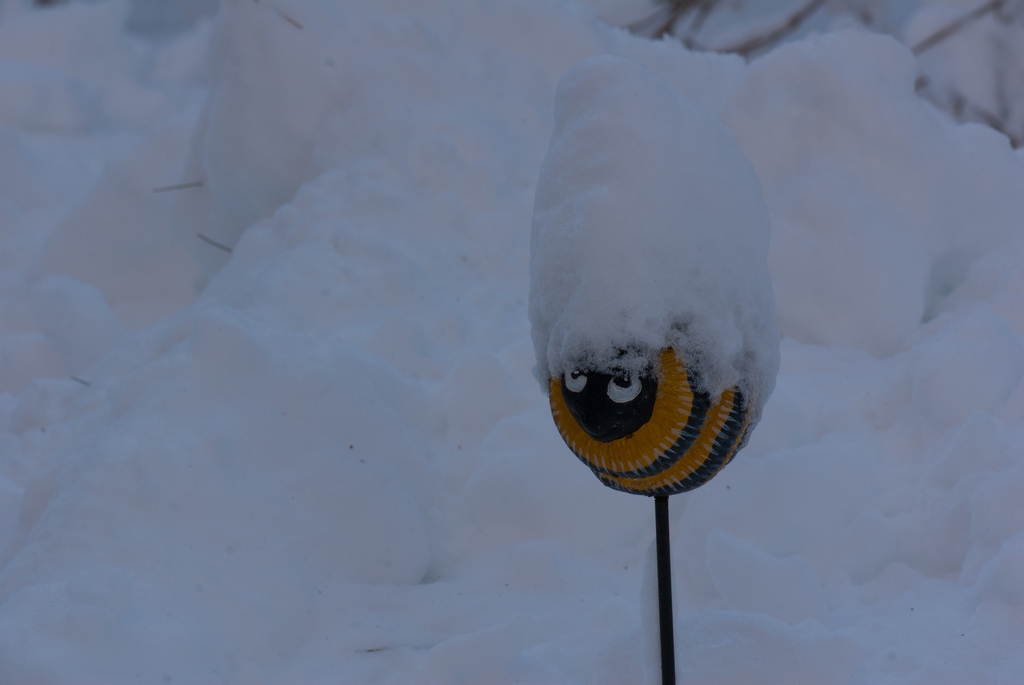 We get up at 7am.  I added wood twice during the night and the little stove that could was keeping us very comfortable.

I cut back on the amount of wood in the stove; no reason to overdue the temperature.  We are very comfortable and relaxed.  Anne is engaged in an endless supply of puzzles.  I am relaxed and comfortable, but feeling a bit sleep deprived so I am not interested in puzzles.  Seems I worry through these events so that Anne can relax and have fun.  (Anne's side comment: Paul gets very antsy when the power goes out.  He sometimes paces like a caged tiger.)

Shortly before midnight our power comes back on.  I walk through the house and check that everything is working properly, and went back to bed feeling happy that all seems good. 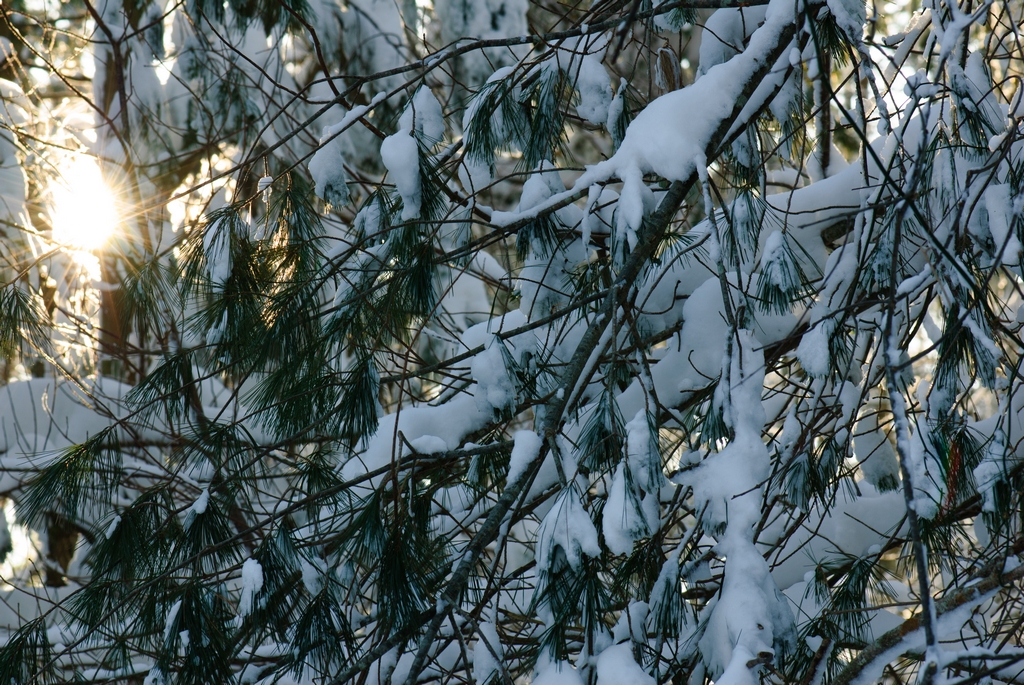 All and all we did very well through this ordeal.  The biggest challenge was keeping water for Scout from freezing.  The morning and night visits I would fill his water bucket with fresh drawn water.  I was also filling up a thermos of boiling water from the stove that I would add to those 5 gallons.  Additionally during the day, I brought down multiple thermos full of boiling water which I added to his bucket.  That worked out fine and Scout enjoyed some extra treats when each time I delivered some boiling water.  He grew accustomed to me walking around the barn with a headlamp. 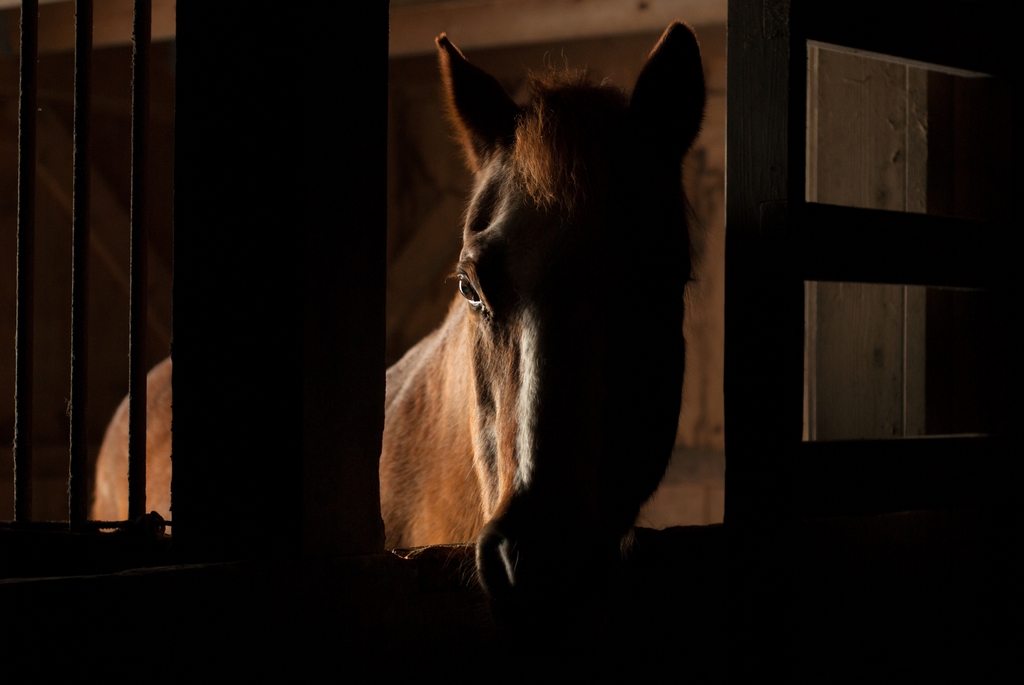 Here are some pictures we took following the storm.  You can see the snow plastered against the house.  (This is actually the West side of our house; most of the wind came from the other direction and yet still stuck snow to the house.)  Some other nearby communities were even worse. 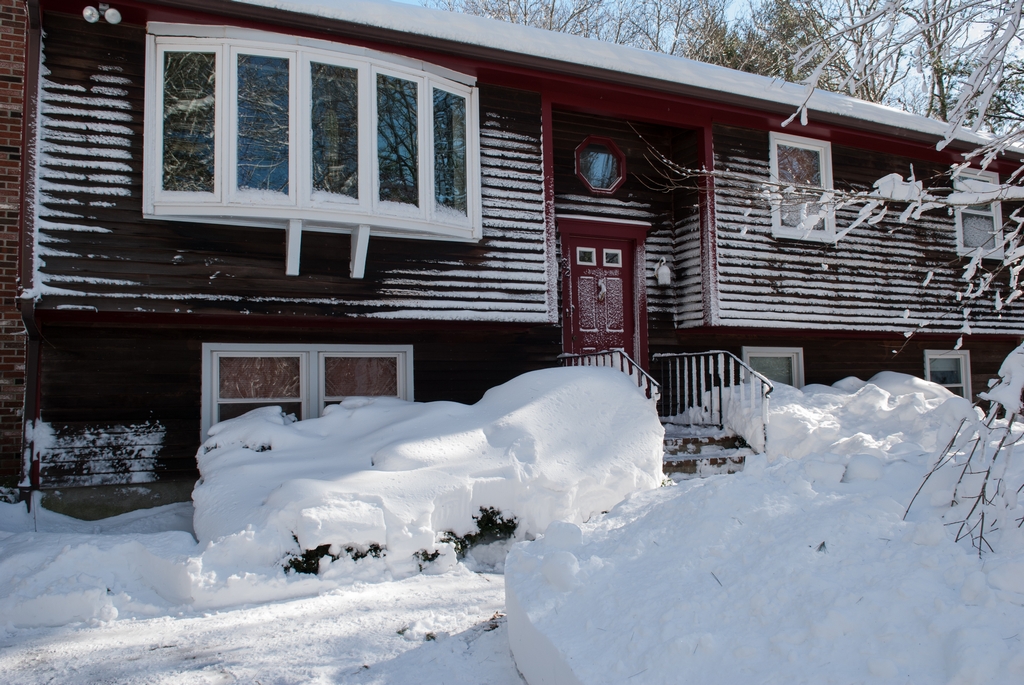 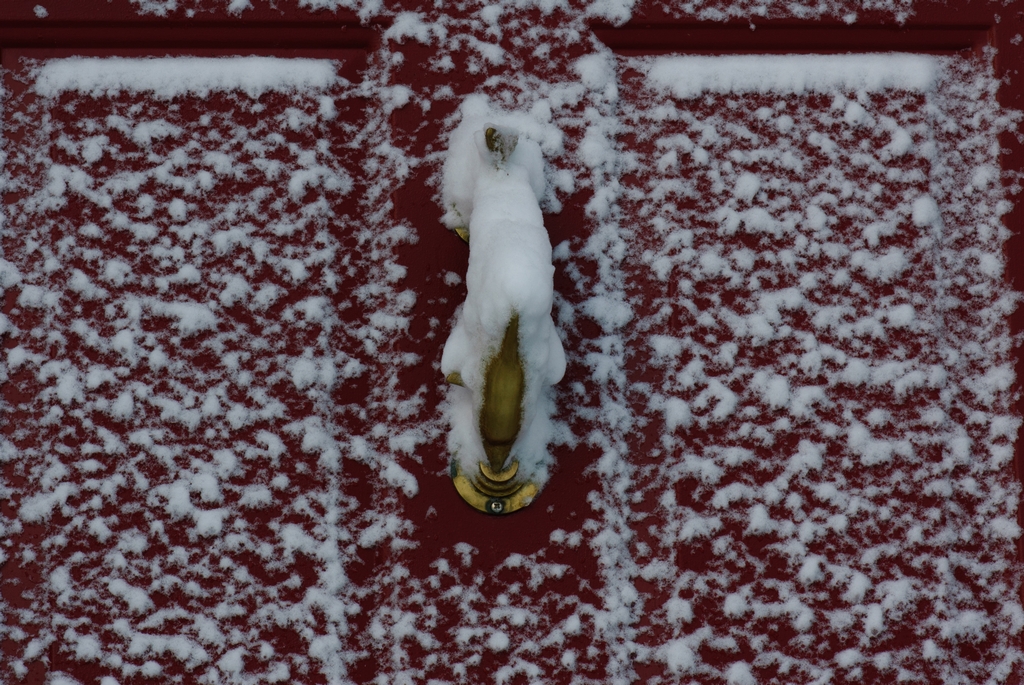 The driveway after it was cleared (but before the vehicles were completely done): 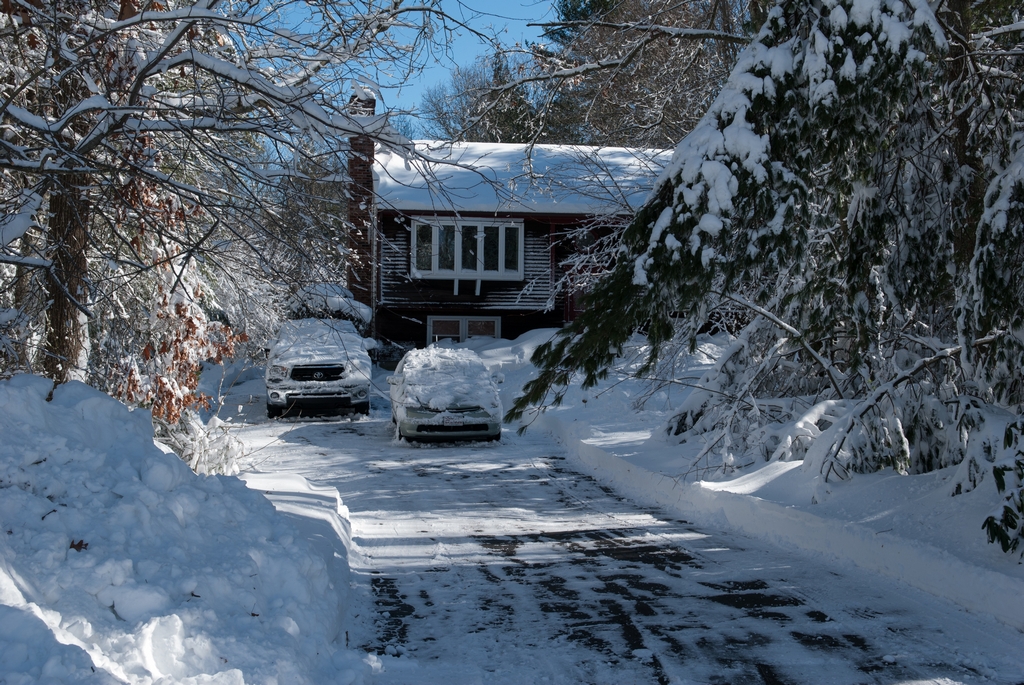 The path that Paul cleared so that we can get down to the barn: 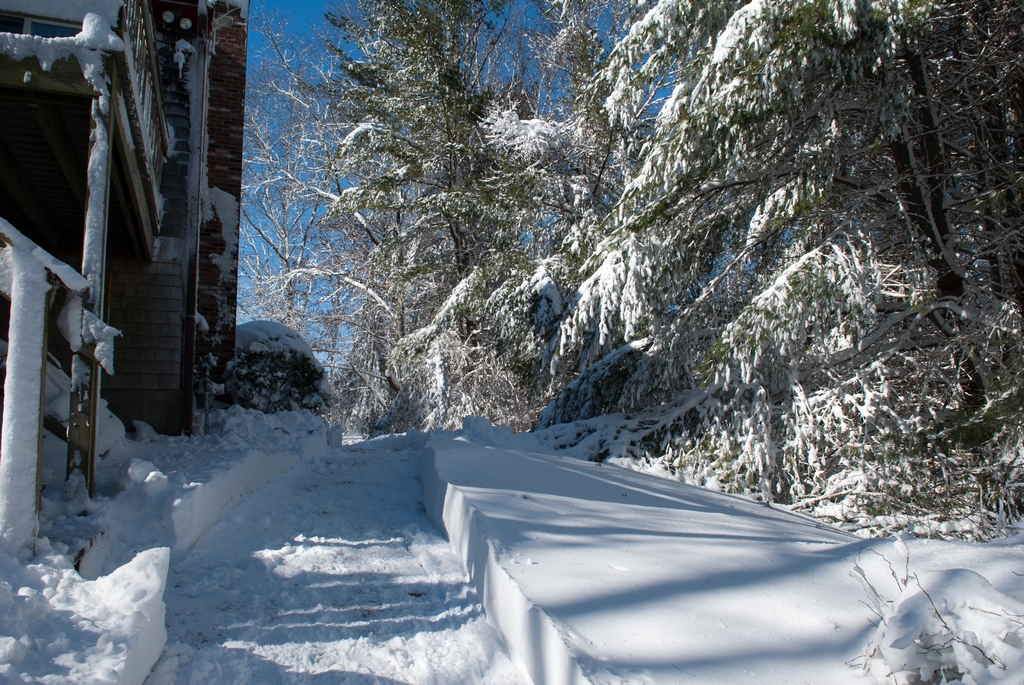 The back (facing due East) of the house and the deck. 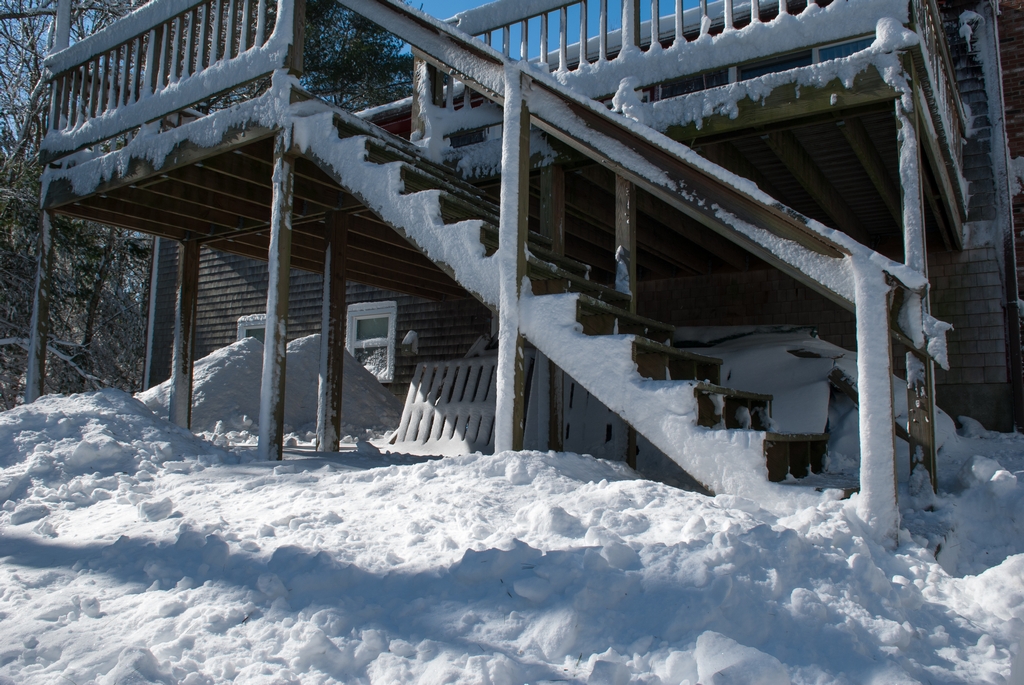 The garden, not exactly planting ready, with the barn behind it.  The front of the barn also faced due West. 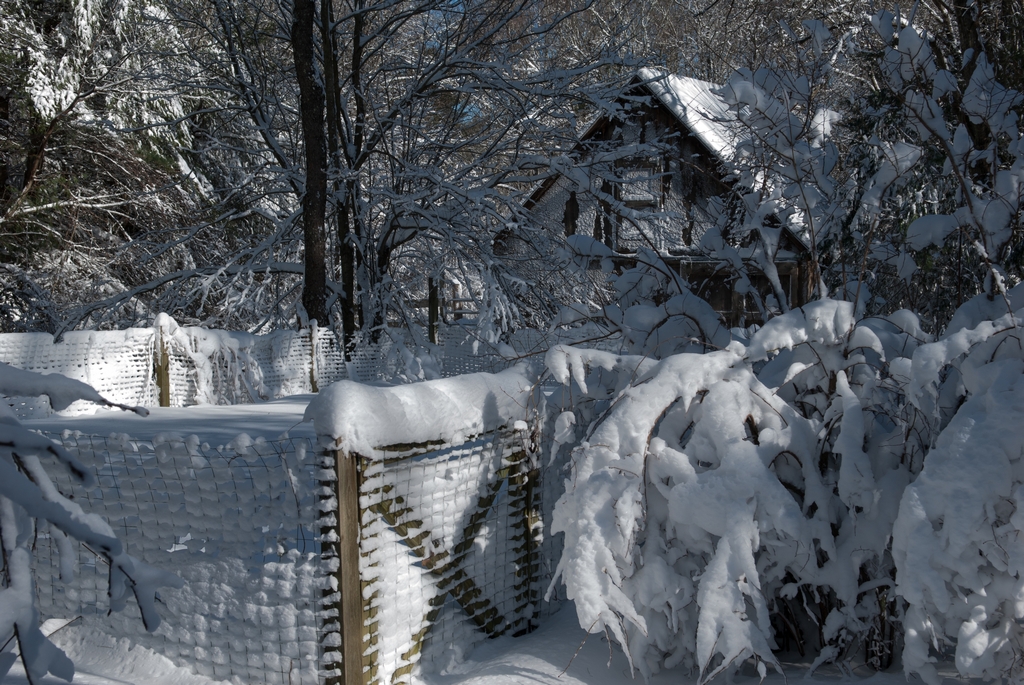 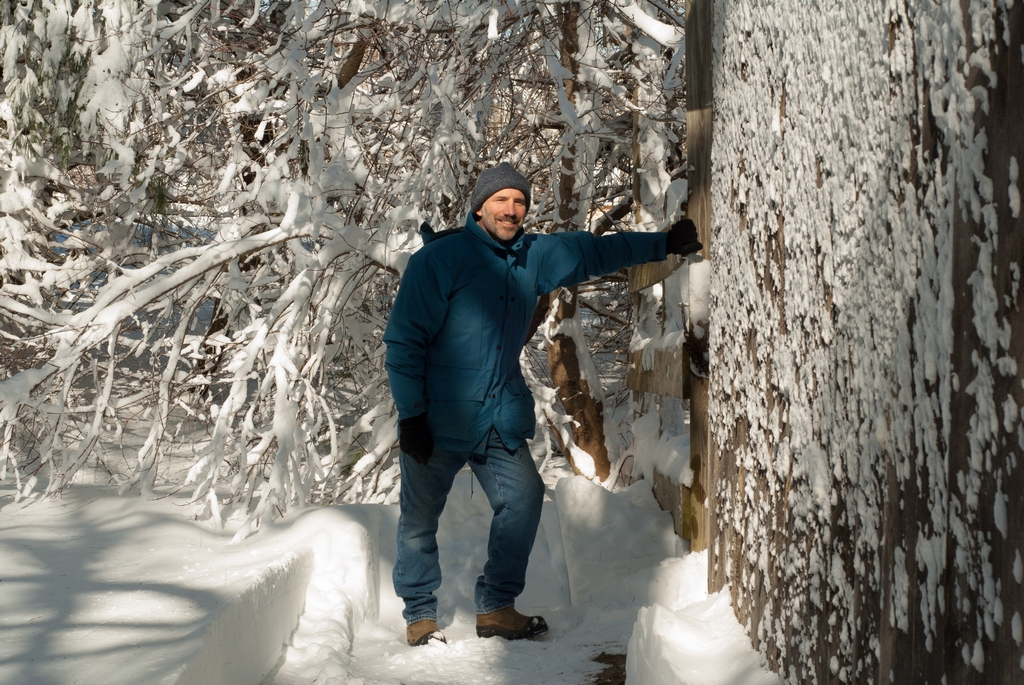 And finally picture of the garden fence: 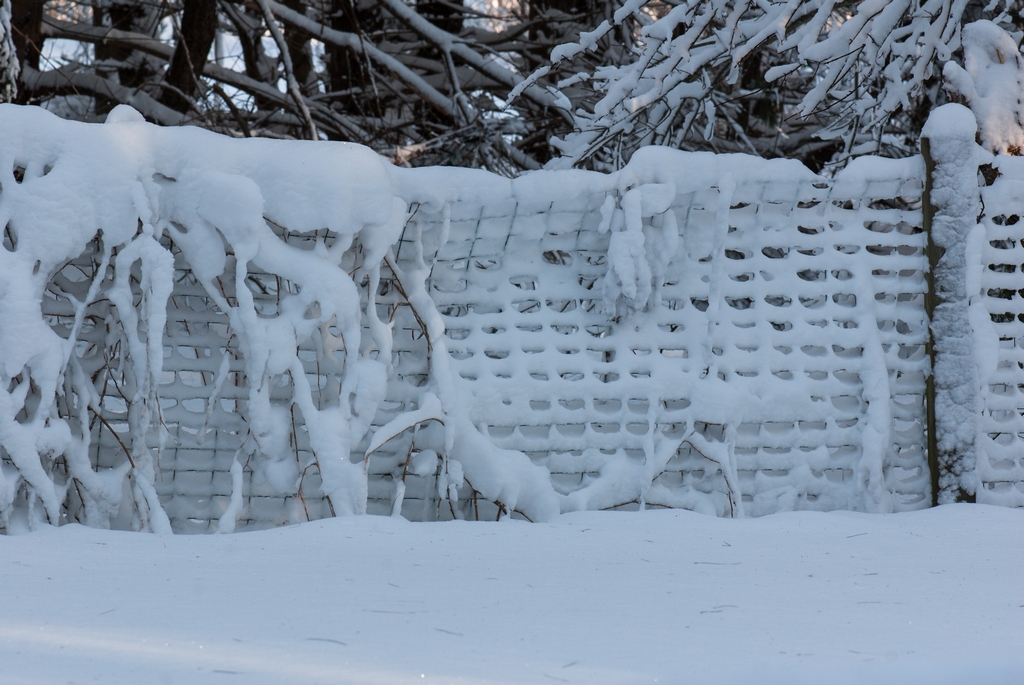