Old Sturbridge Village is a 'working museum'. Most of the buildings are historic buildings that were moved to the village from other locations within New England. The employees dress in period clothing and participate in the activities to run a village from the 1830s. They act as historic interpreters, telling us about events and developments both before and after the period of the village. (We found that more helpful than when they stay in character as if it were 1830.)

Paul and I had a great visit to OSV. We went during the week, although one of the employees told us that weekends at this time are fairly quiet, because there are no school trips. We were not there with any really large groups, though. I forgot my camera, but Paul was able to take some with his Droid phone.

I thought this 'traditional epitaph' on the graveyard sign was very accurate, although I've never heard it before: 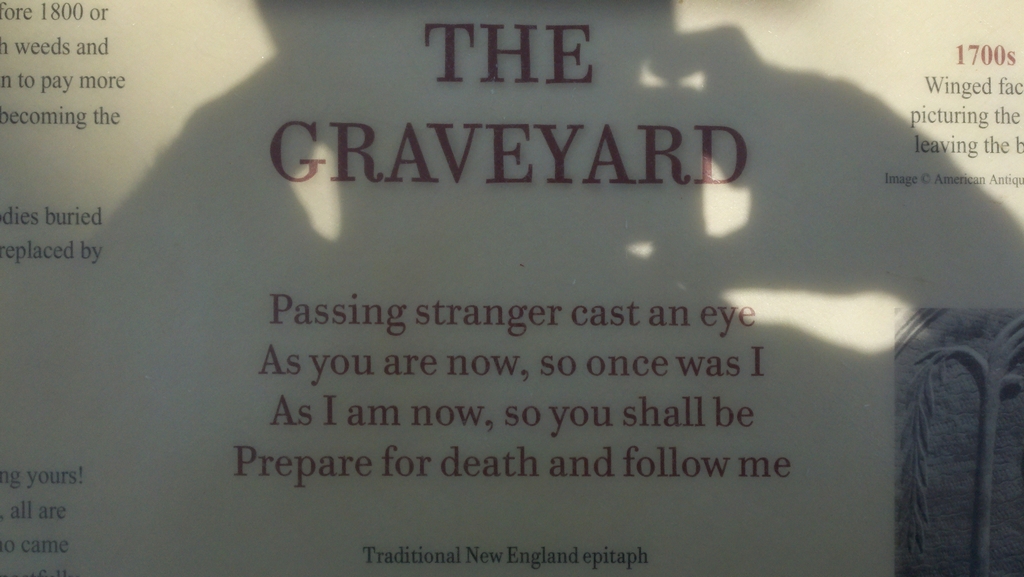 The graveyard was right next to the meetinghouse. (See map on-line if you want.) They had an organ in the meetinghouse, which some had and some didn't. Luckily, their employee who can play the organ was working when we were there, and played a piece for us. It had a very nice sound. He was very knowledgeable, and we would have been happy to spend a little more time but a group came in after us.

A horse-drawn carriage was available for rides around the commons. 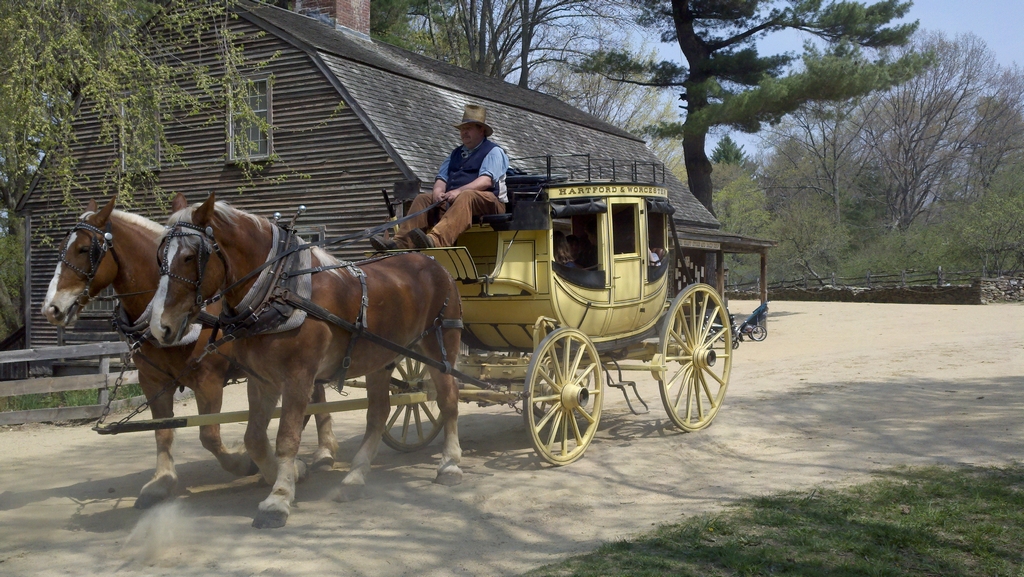 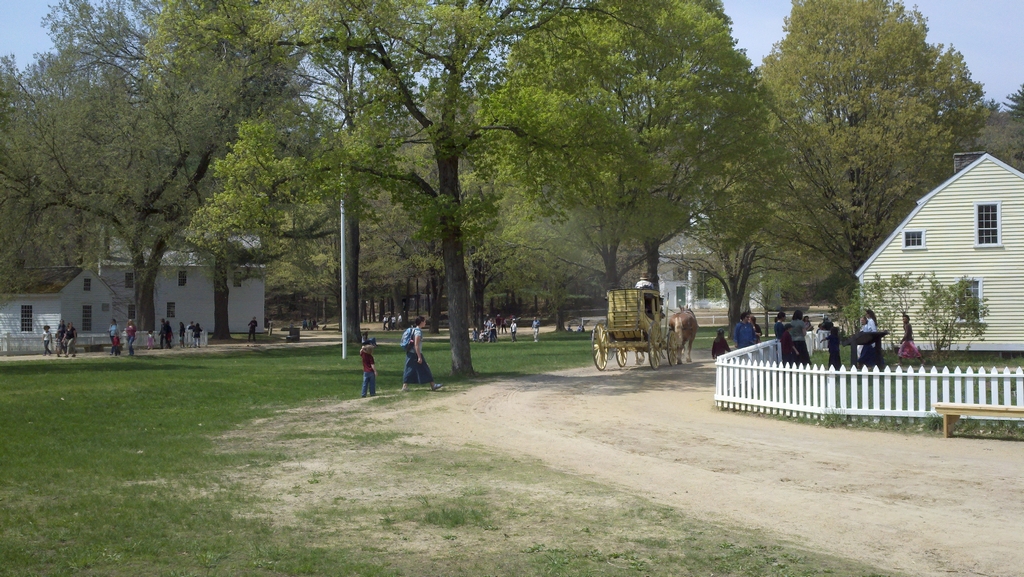 We spent some time in the town bank as well. The country bank was not a savings institution at this point, but a vehicle for loans to small businesses such as the print shop. Even at this time, coins were valued based primarily on their weight. 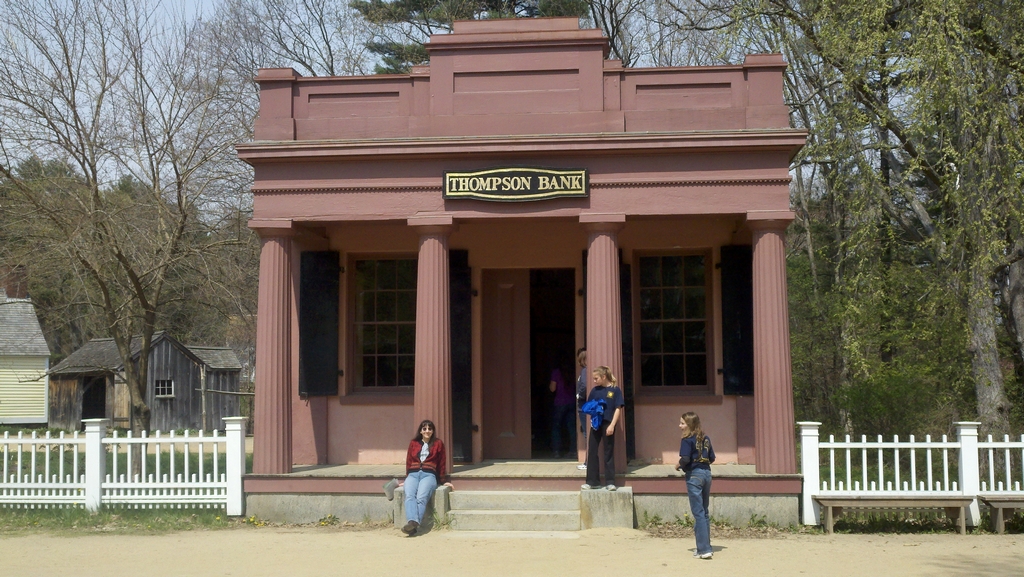 There were a few different exhibits that included textiles, which of course I found very interesting. In one, we discovered something (you need to read the notation in the 1st picture): 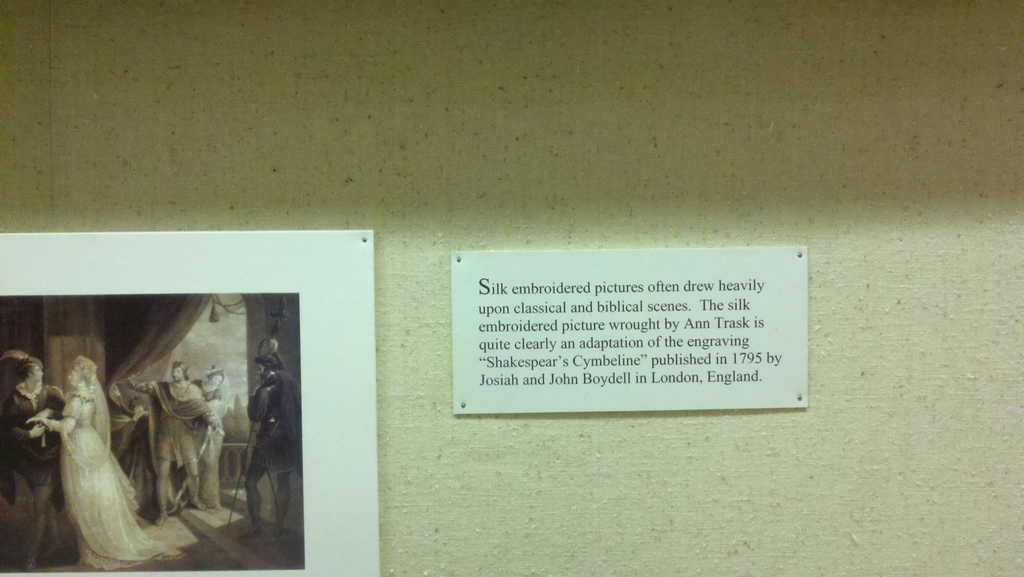 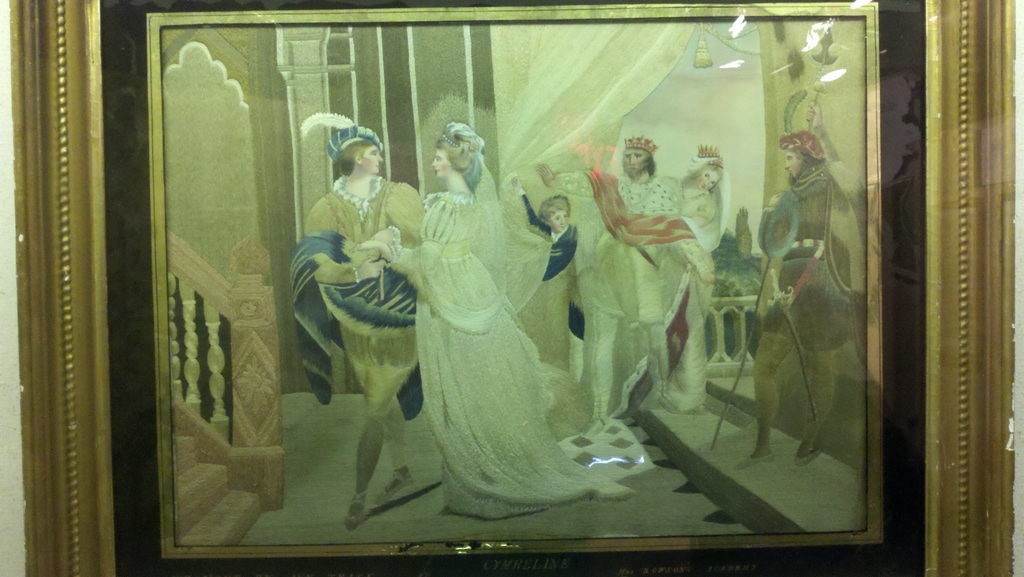 Yes, indeed, our sister-in-law is talented and much older than we thought. (The 'painting' in that second picture is actually all done in thread.)

This is a working village, and livestock were definitely present. The oxen in harness were only 1 year old, and can't really start working until they are 4. For exercise, they were being brought around the common dragging a heavy sled. As they get older, the weight would increase some. The oxen were very well behaved. 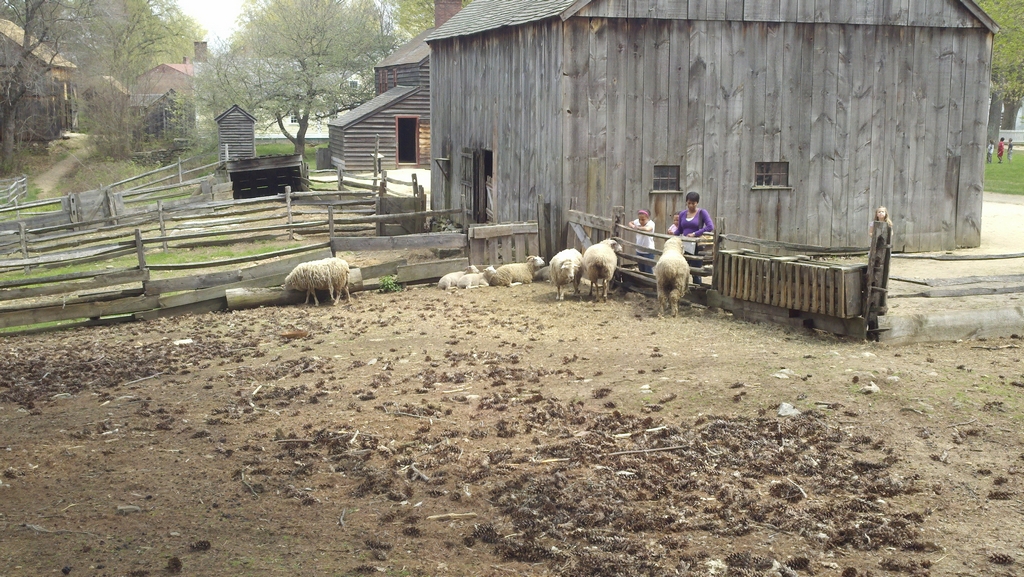 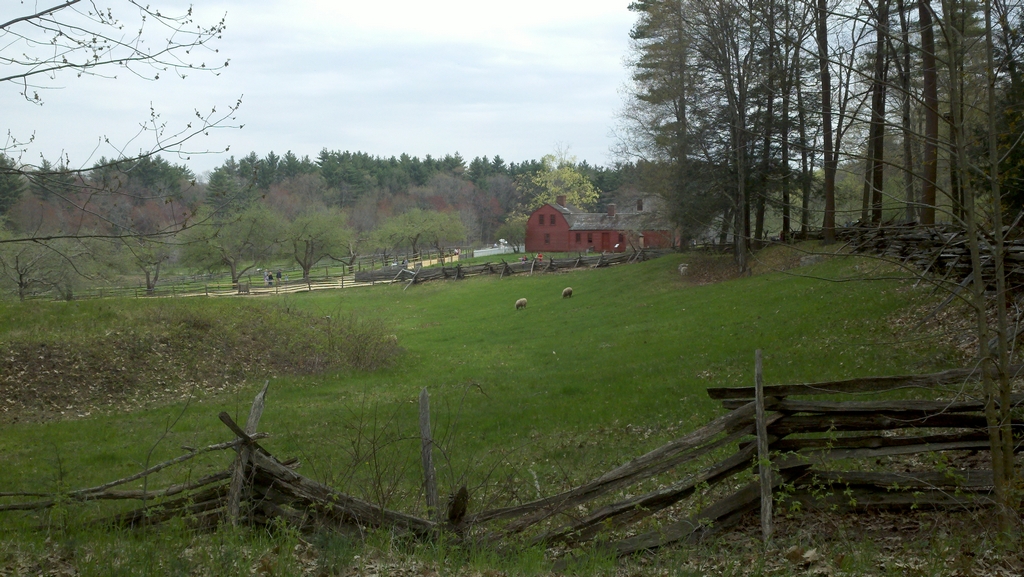 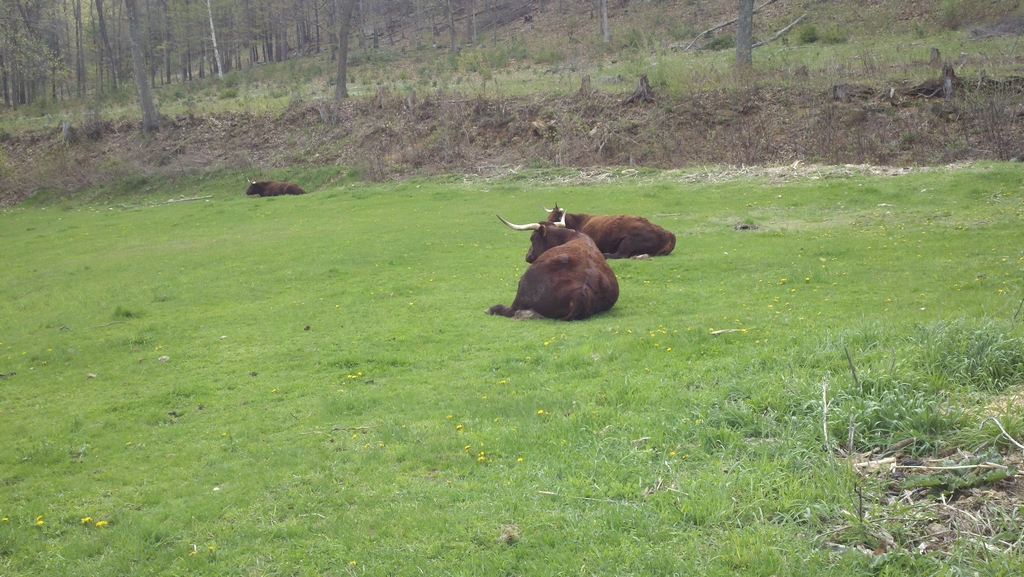 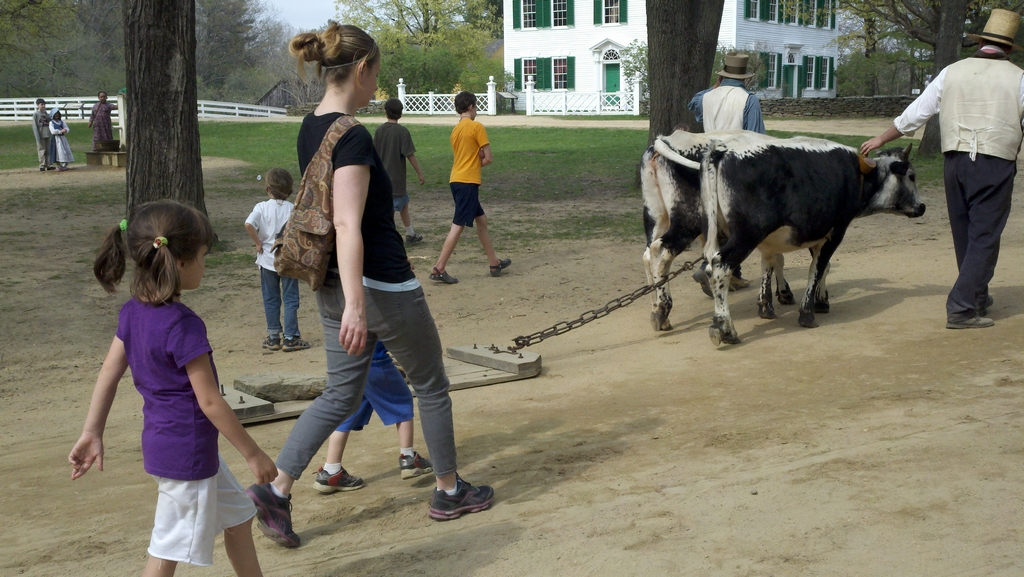 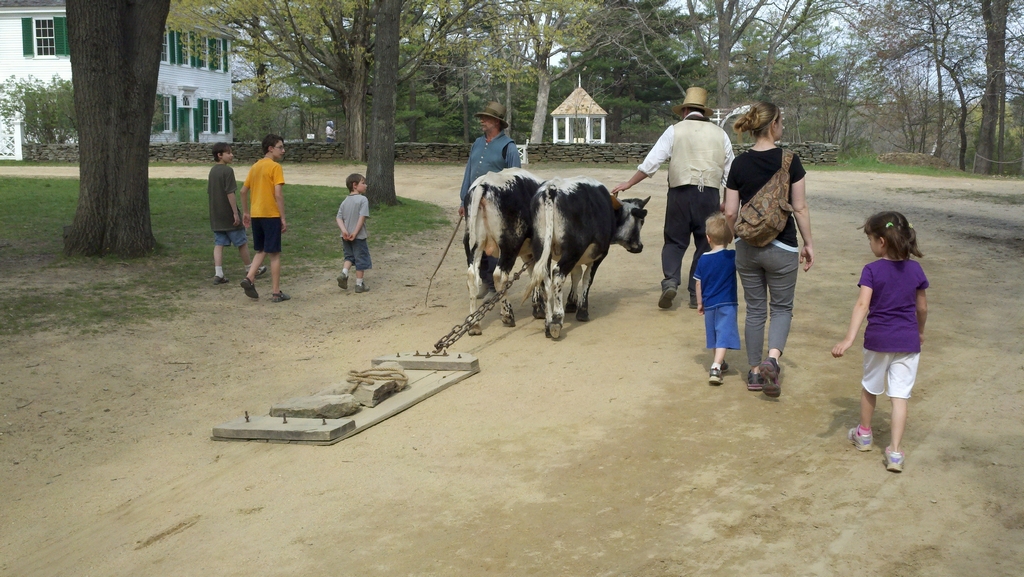 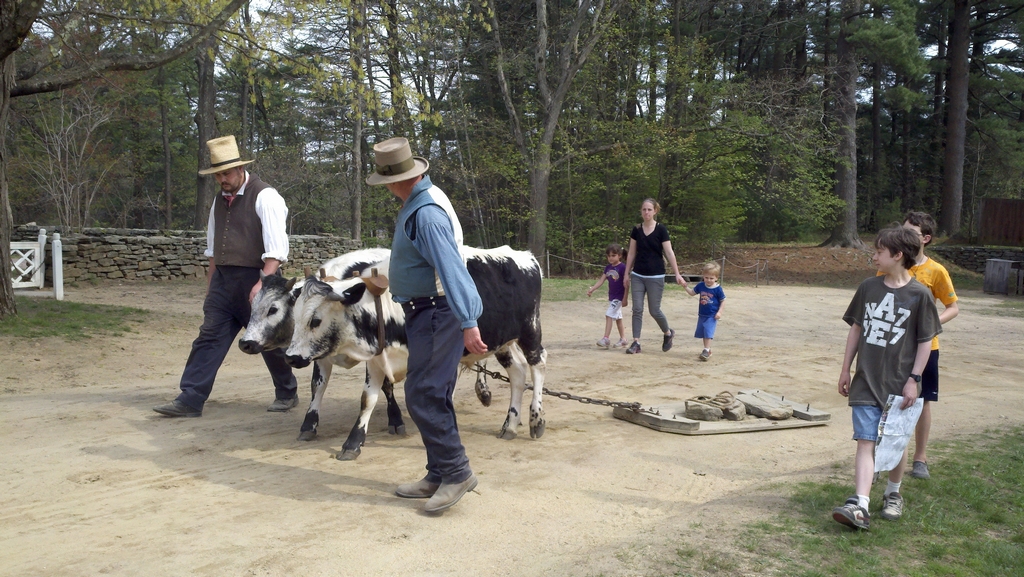 The also grow crops; these men were weeding the berry bushes. In the nearby building, a woman was cooking. To say the 'recipe book' gave minimal directions would be an understatement; it was more like general descriptions of the end product! 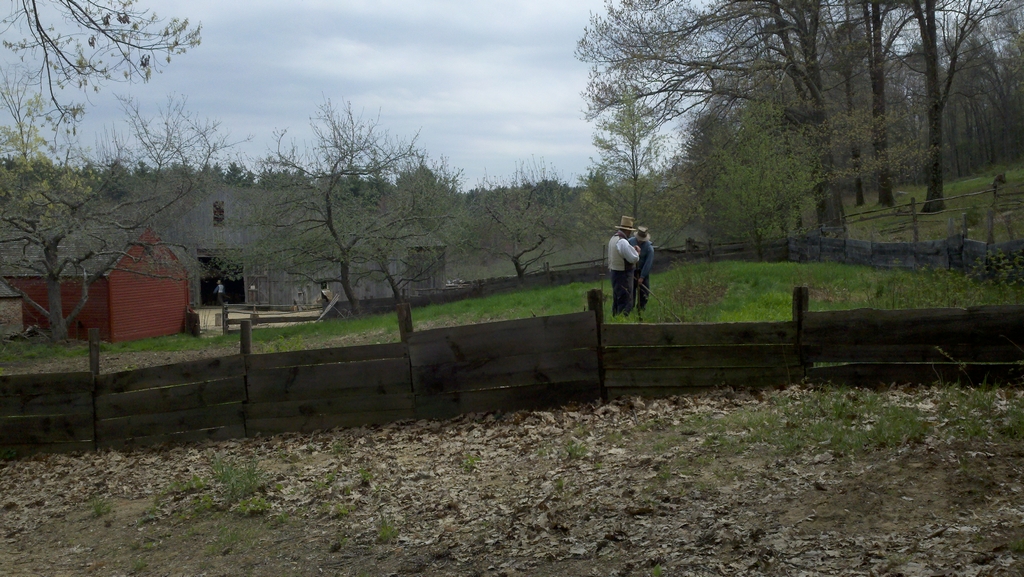 Here are a number of pictures of the town common, and you can see the buildings around it. 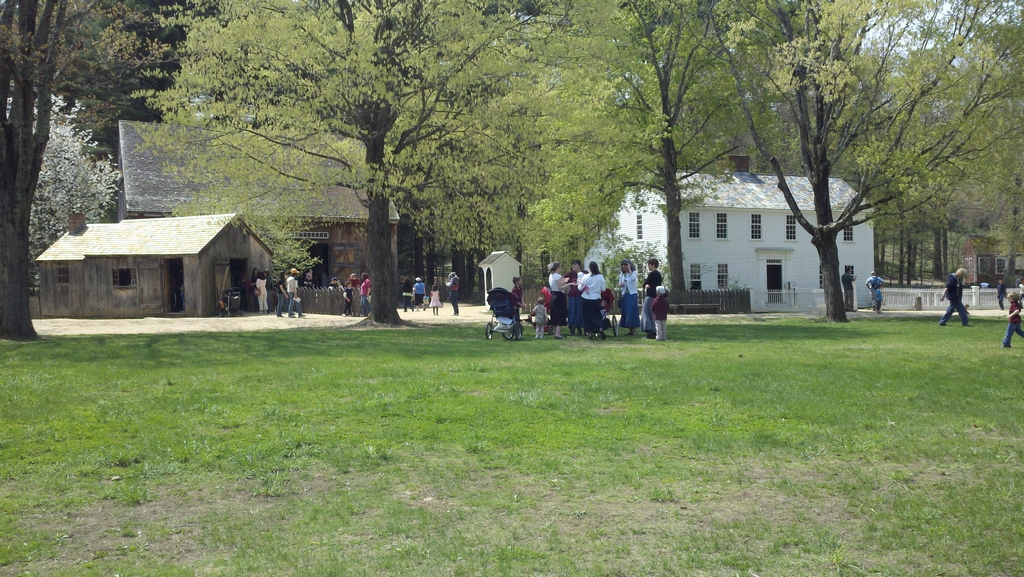 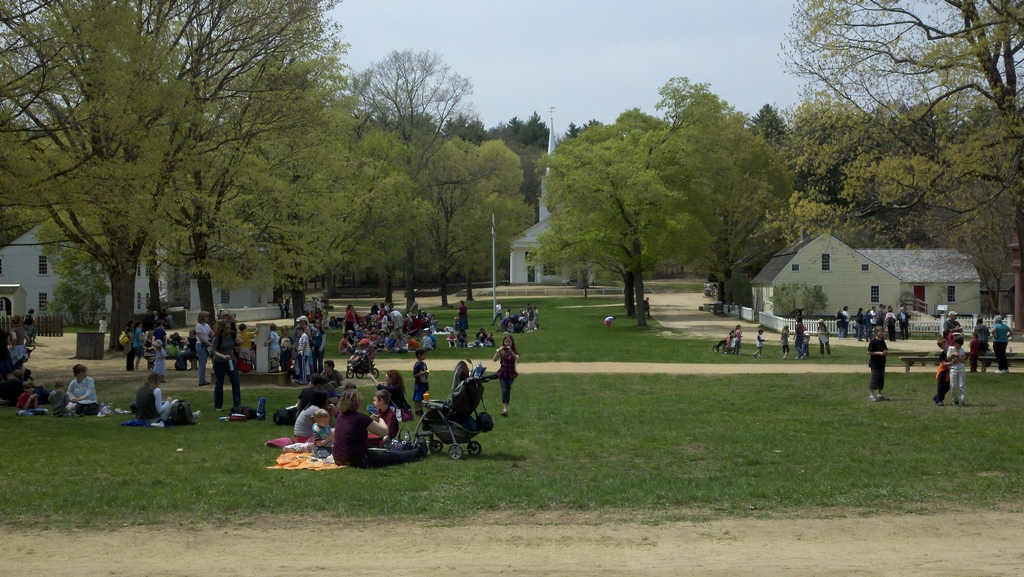 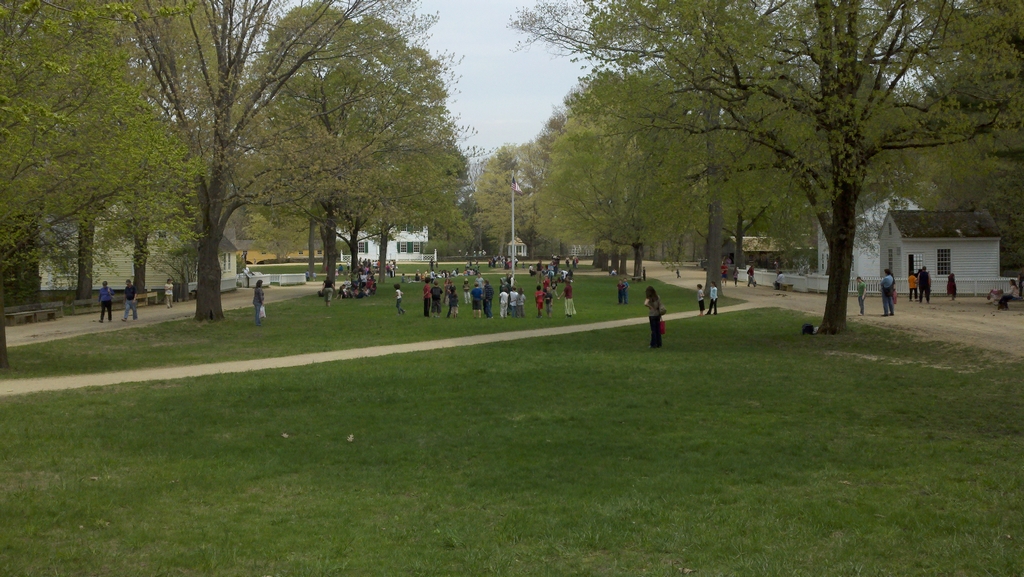 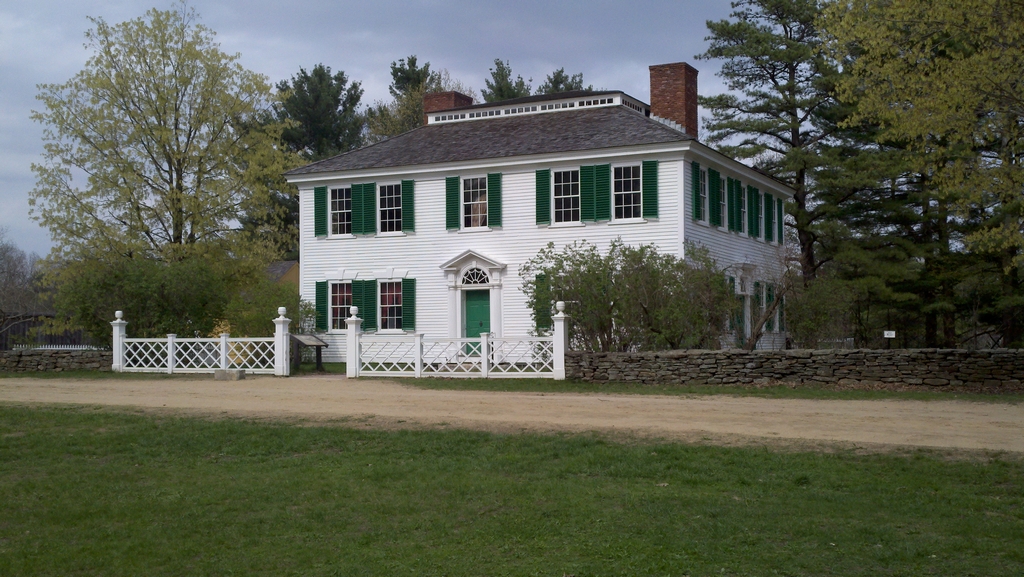 At one end was the general store. 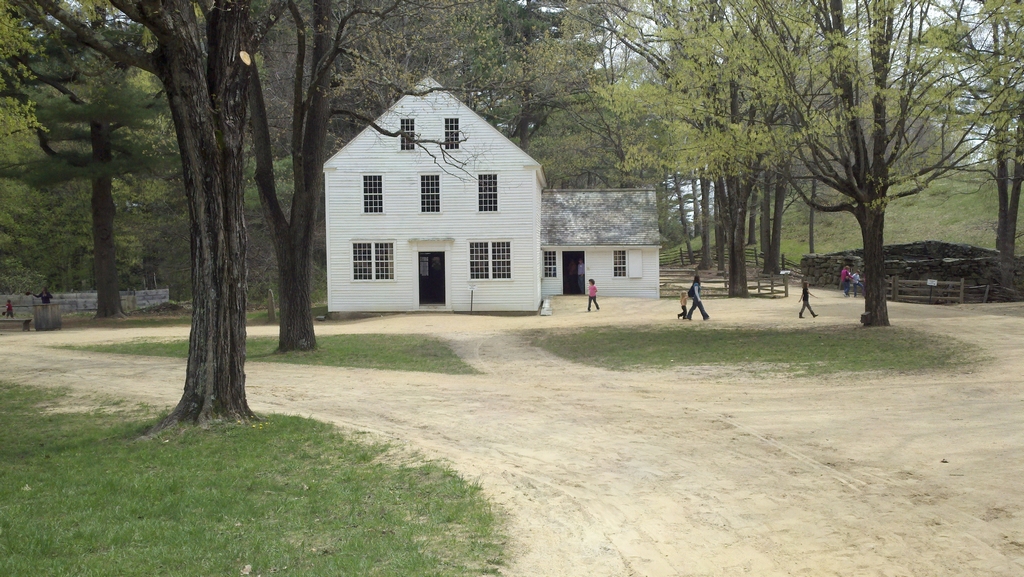 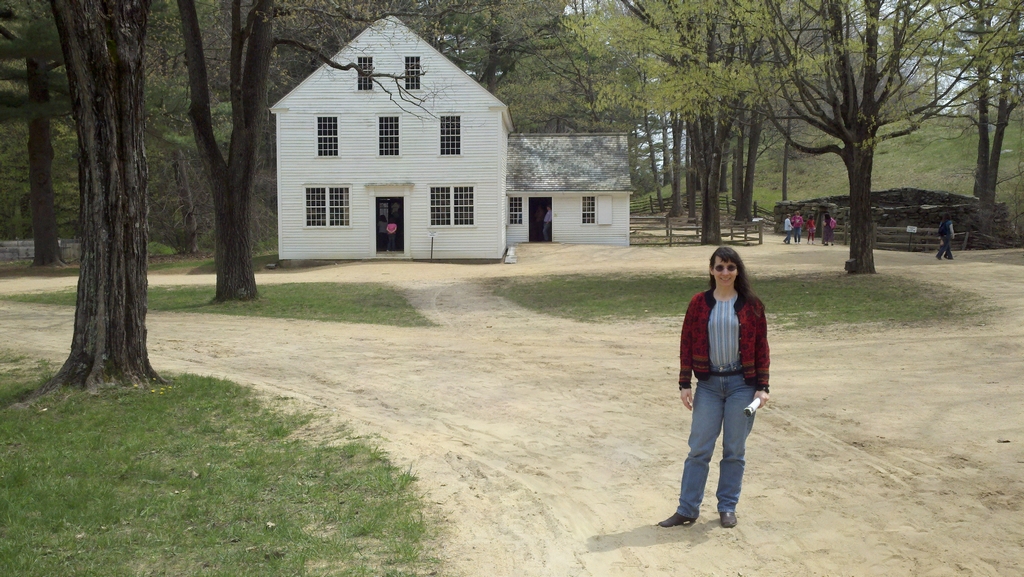 Last shot, of the smith's shop. The smith was a young man who has an active forge outside the museum as well. 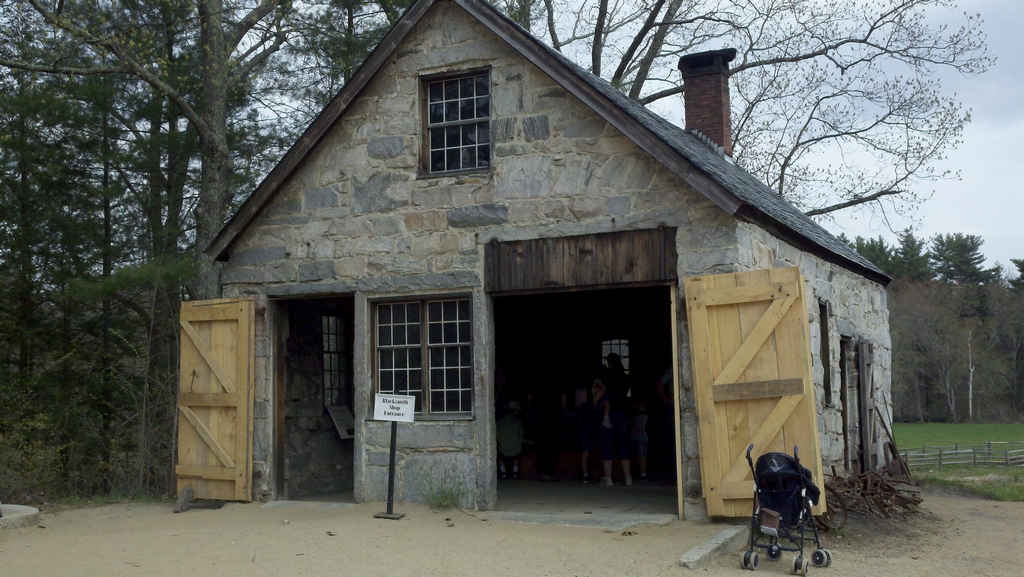 There is a lot more we could say about the visit. Well worth going!