Ah, Bonaire! It doesn't mean much to most people, but for Paul and Anne it is a familiar place. Shore diving is it's claim to fame, and what brings us there. (Neither of us, but particularly Anne, is keen on boats.) Plus it is where Paul (finally) proposed marriage to Anne. I'll break the suspense now: we put down our deposit for next year's trip

We left Boston on Friday October 26th for our flight through San Juan and then to Bonaire. The San Juan airport isn't a bad place, although spending hours there is never particularly attractive. They do, however, have a Subway with the Veggie Patties (not all have those), and a place with pretty good stuffed baked potatoes, so we eat pretty well there

We stayed at Carib Inn, which we have done for the past number of years. Great little place. The owner, Bruce Bowker, is one of the folks active since scuba diving became popular on the island, and was involved in the strategic decision to make the reef a protected area 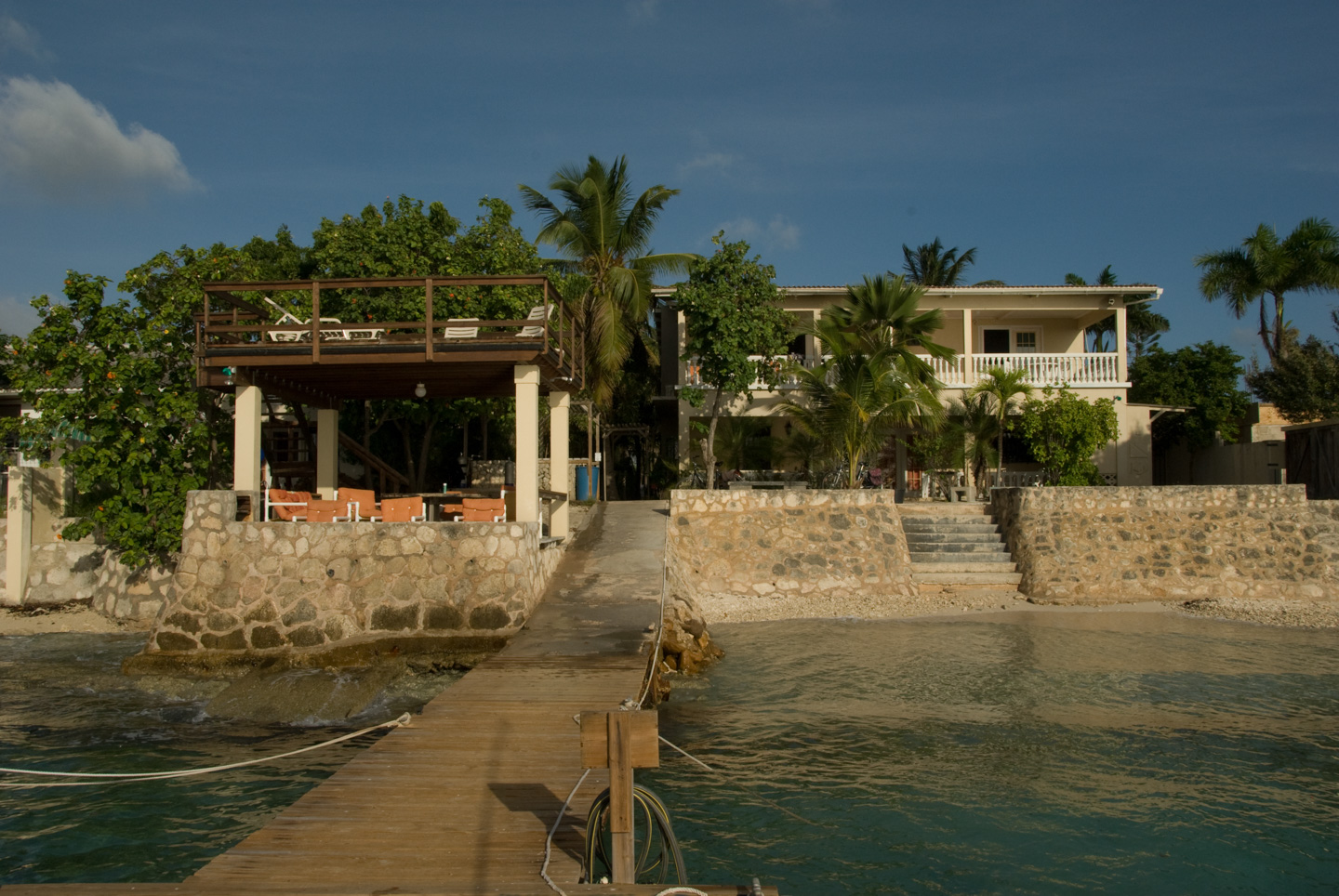 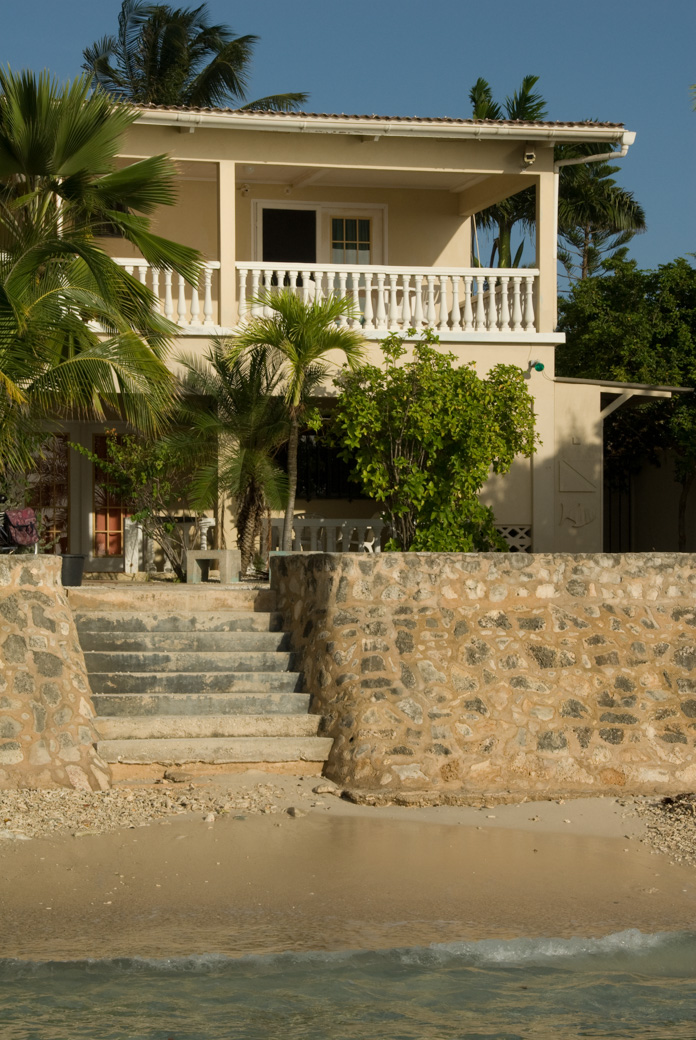 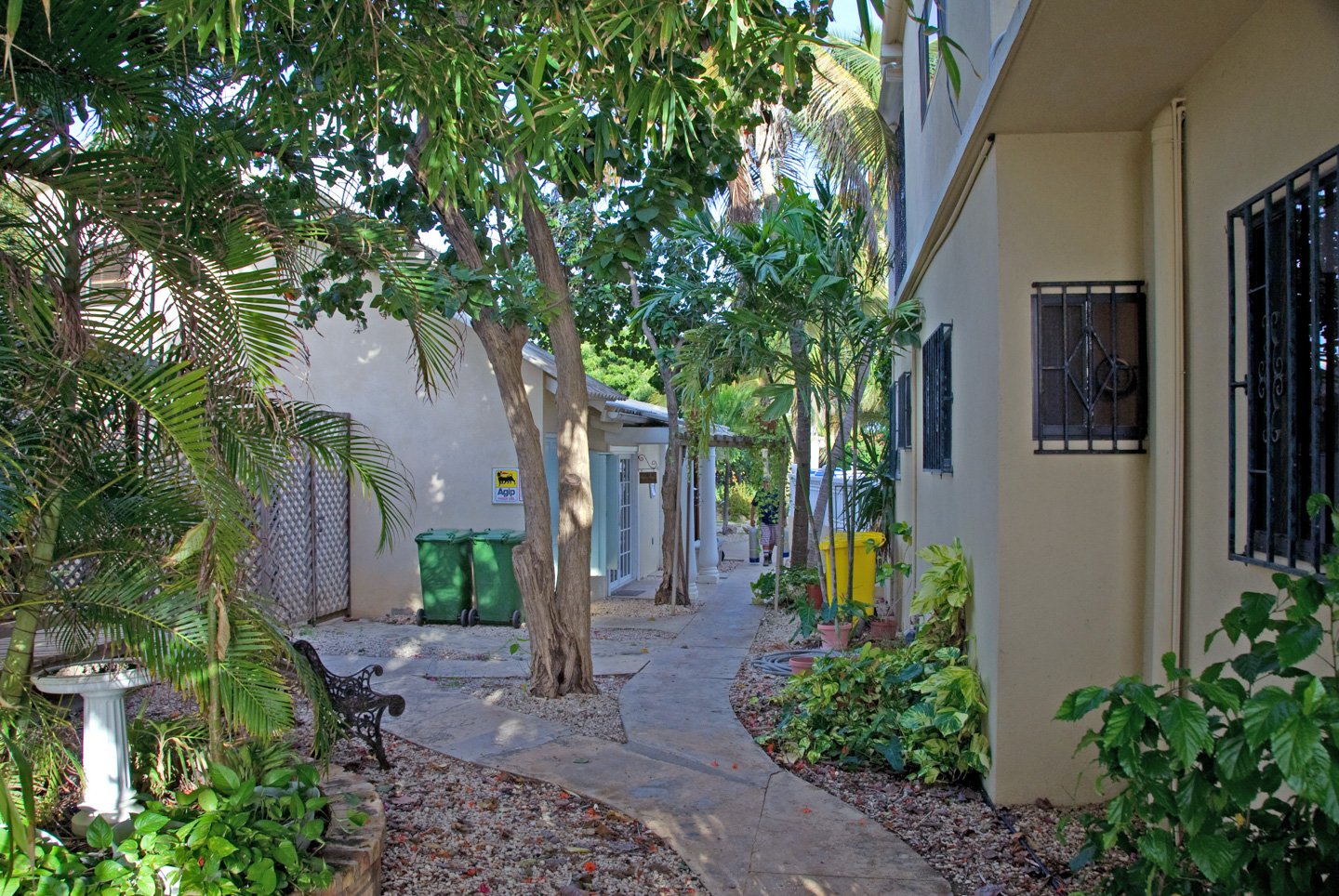 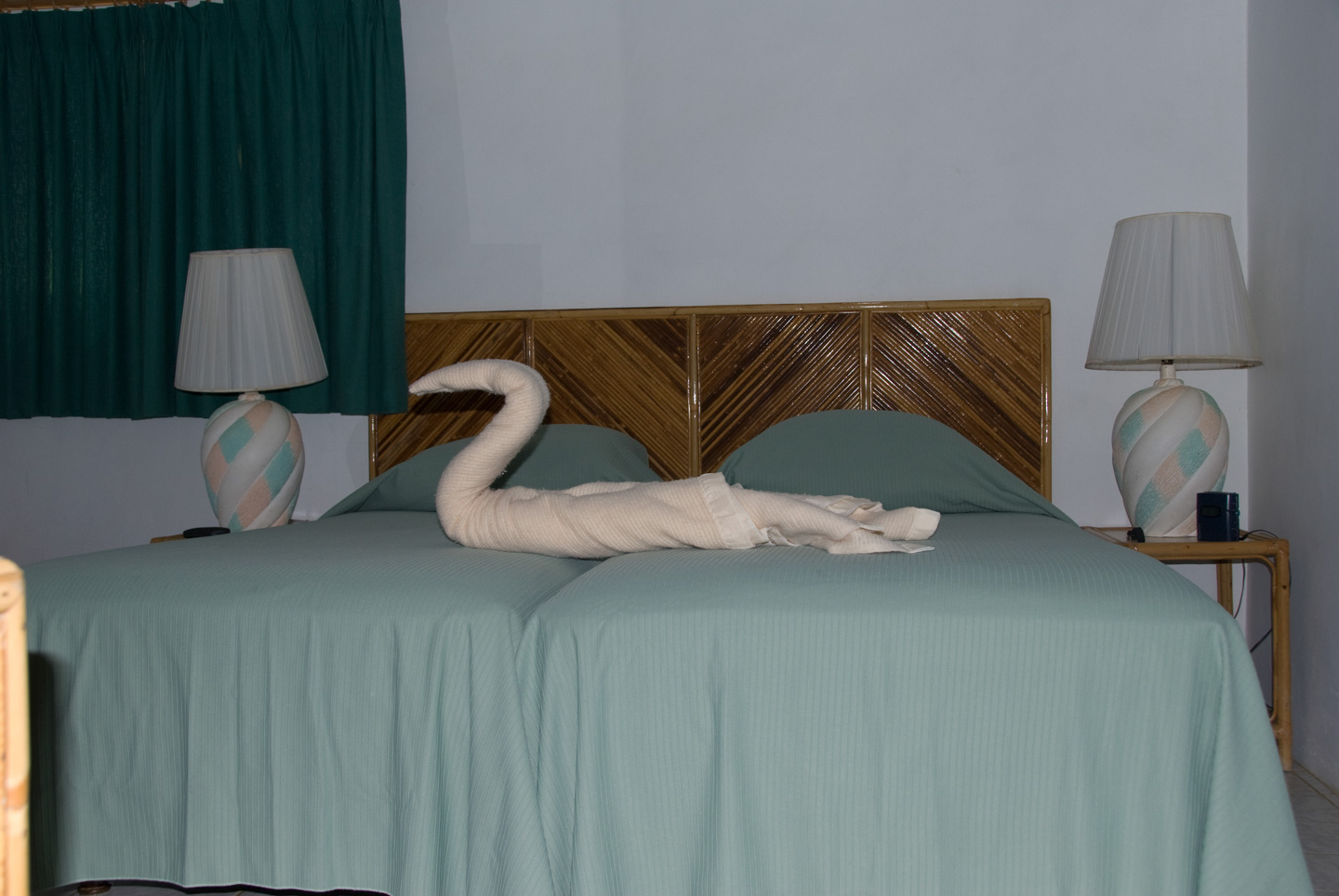 Edward is one of the friendliest folks you will meet. Since he is deaf, it is a little difficult to have a conversation with him, but he does pretty well. (And he knows English well, which makes it little easier.) He has started diving recently 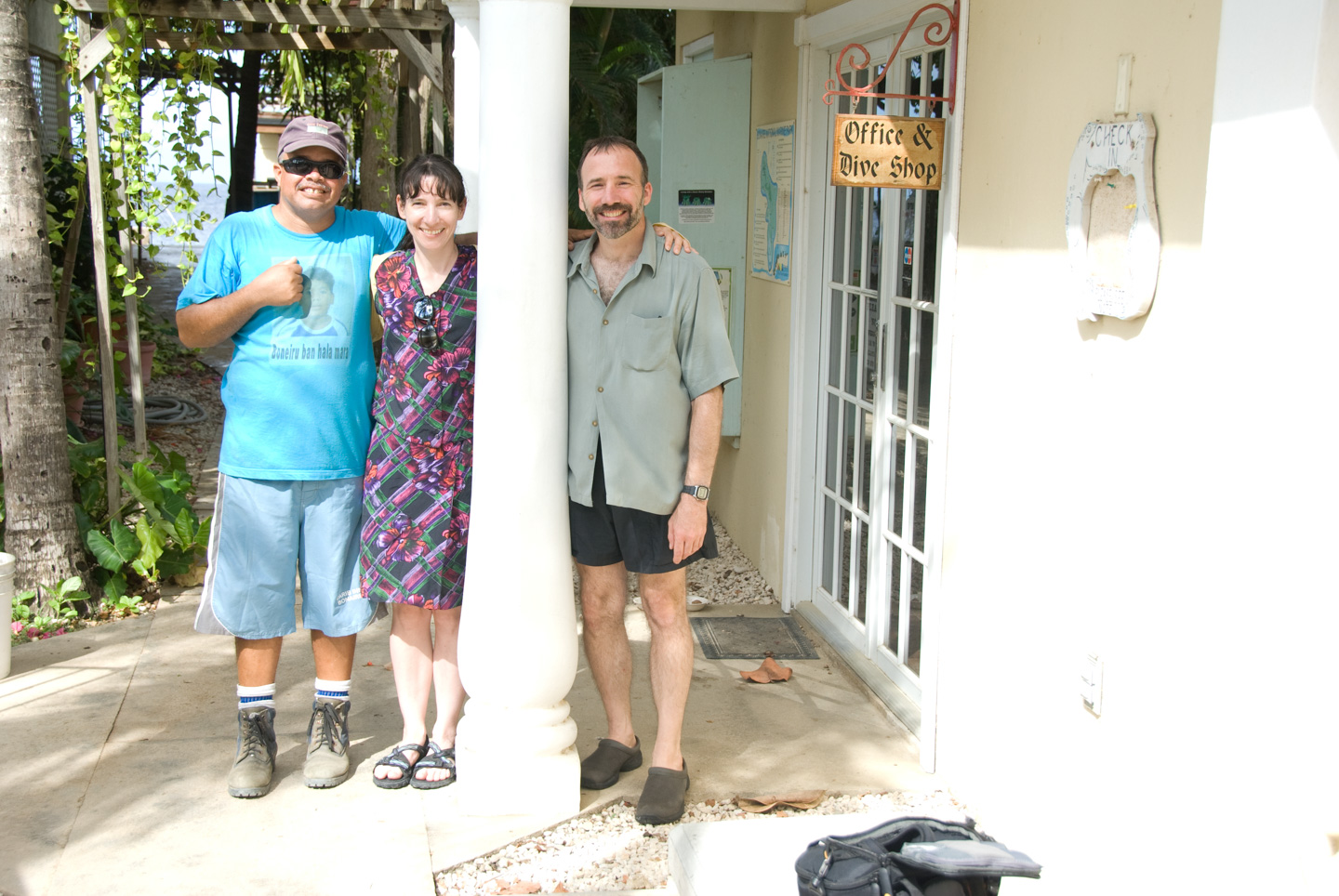 On the street outside the inn they are doing upgrades. The utilities will all be put below ground level, and a sidewalk will be added to the street. I expect it will look great when they are done. However, the safety standards used during the process are rather interesting 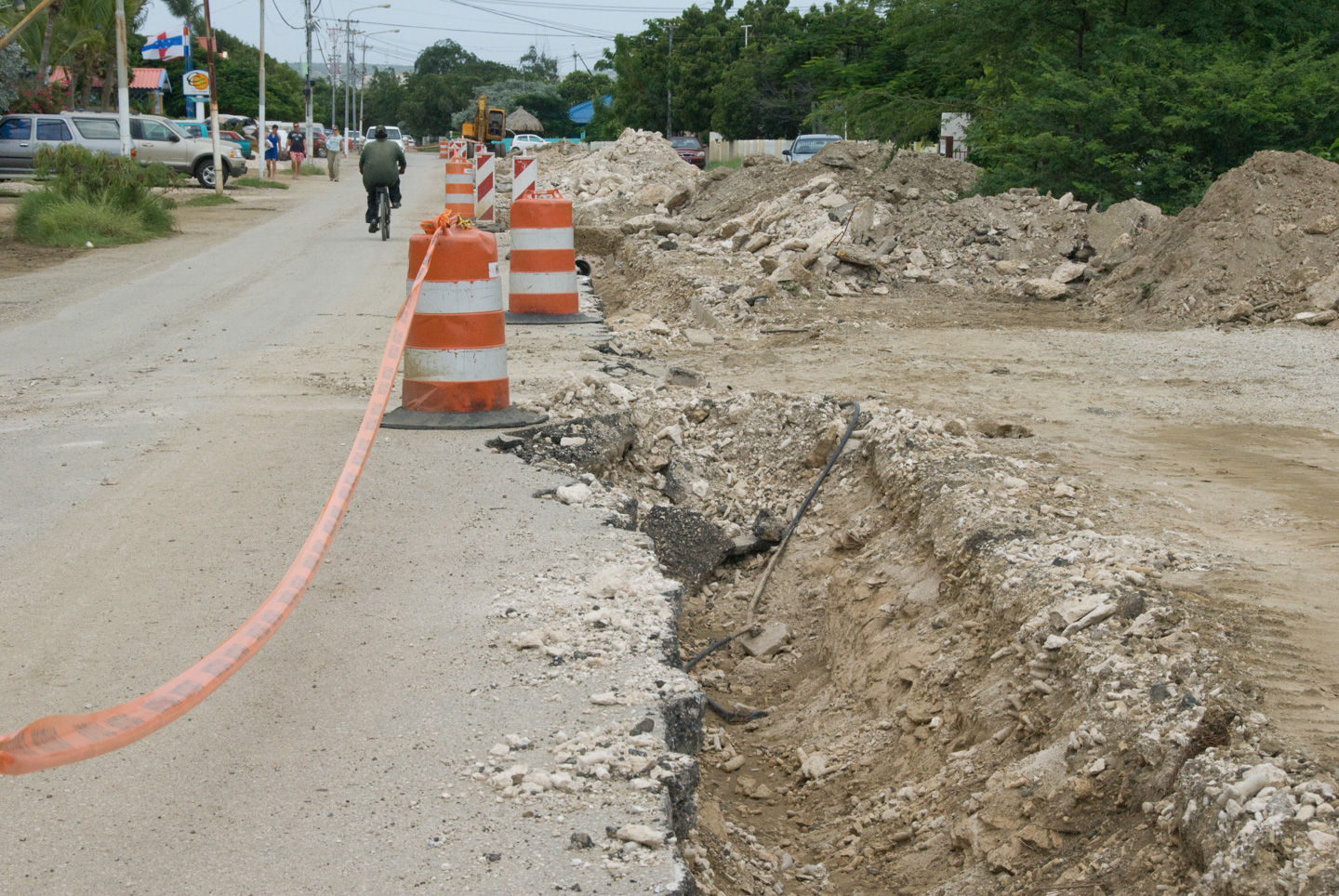 Our diving days in Bonaire go something like this (specifics vary): tea and coffee on the deck (see next pictures). Then breakfast (in the room) of yogurt with muesli, toast with peanut butter, and a sliced apple with peanut butter. Then we get the dive gear together, grab our tanks, and go off to a dive site. Our dives this year were longer than previous years, being primarily 60 to 75 minutes (with a few even longer). That's a long time to stay underwater. After the dive, we returned to the inn, dropped off the tanks to be filled, and rinsed the gear. Made lunch (peanut butter and jelly sandwiches, with potato chips, pretzels, mixed nuts, corn chips, water) and had it on Windsock Beach, which is fairly near the inn and across from the airport. Filled out our dive logs during lunch. Back to the inn to pick up our gear and tanks, then off to a different dive site. Back to the inn to drop off the tanks and rinse the gear. Fill out our logs, perhaps read a little, perhaps take a short walk, perhaps go take pictures. Do an evening dive, then have supper. Or visa versa - have supper, then do a night dive 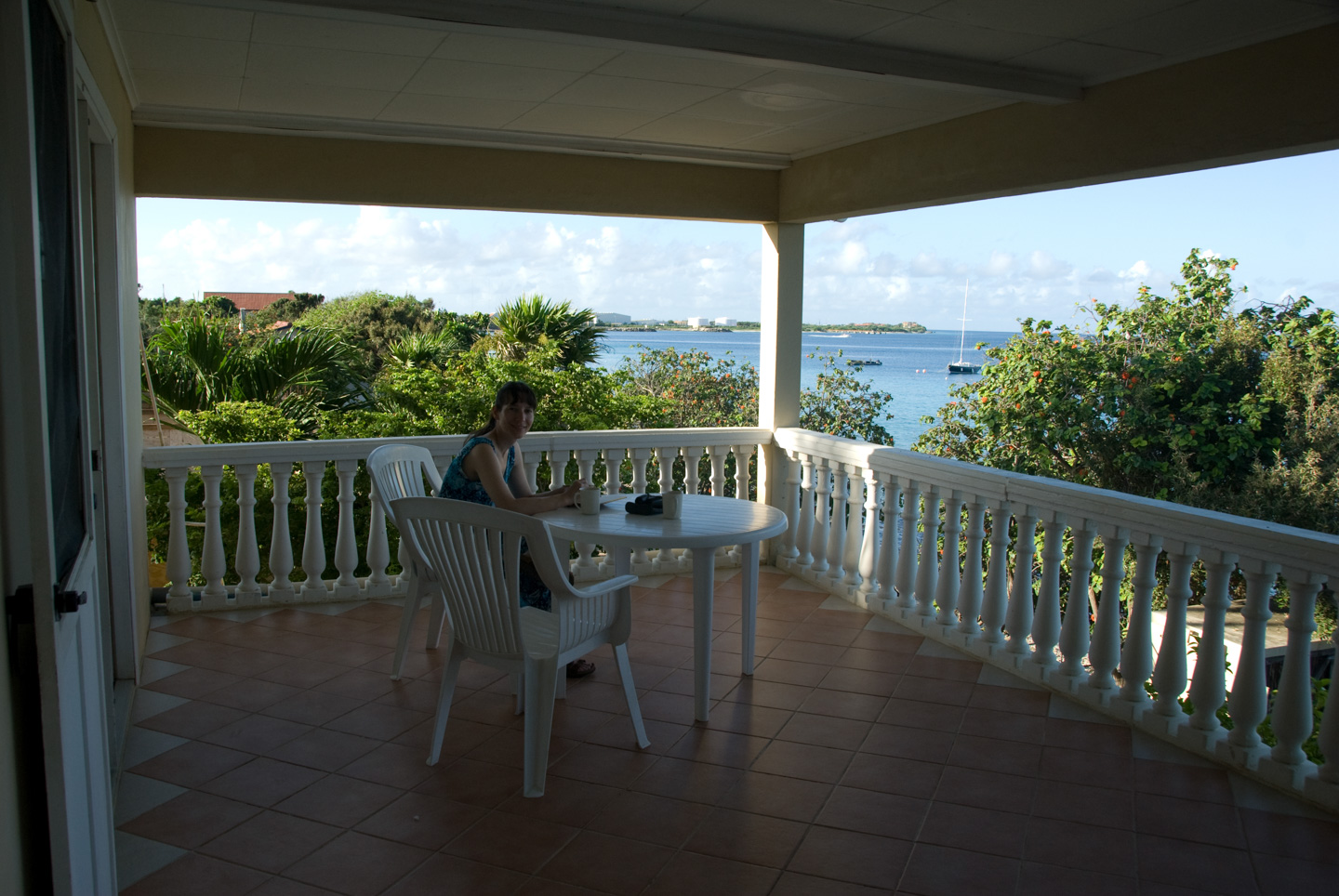 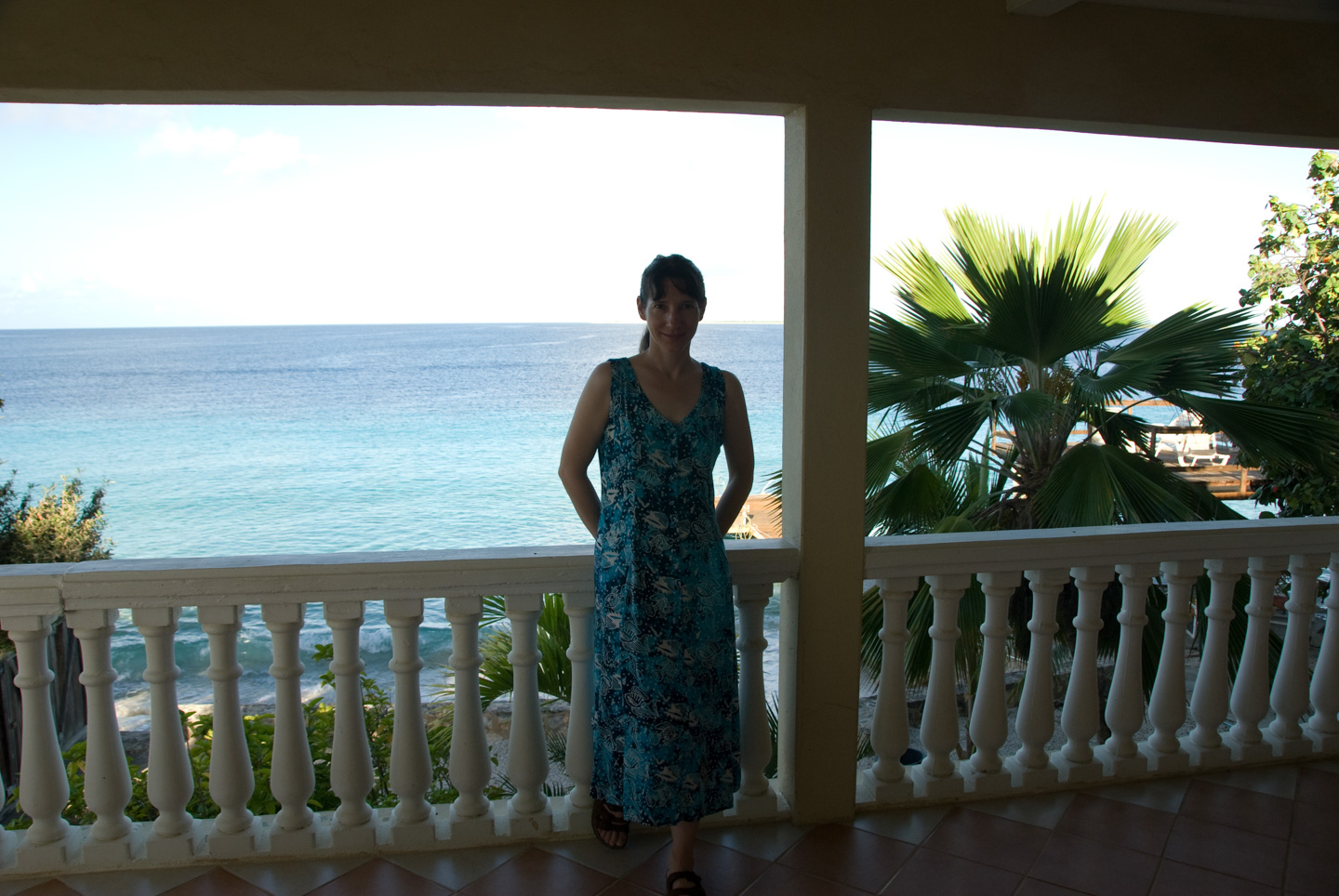 A couple dive sites that we used this year: 'Oil Slick Leap', which is a nice dive despite the name, and Jeff Davis, where the entry looks harder than it is 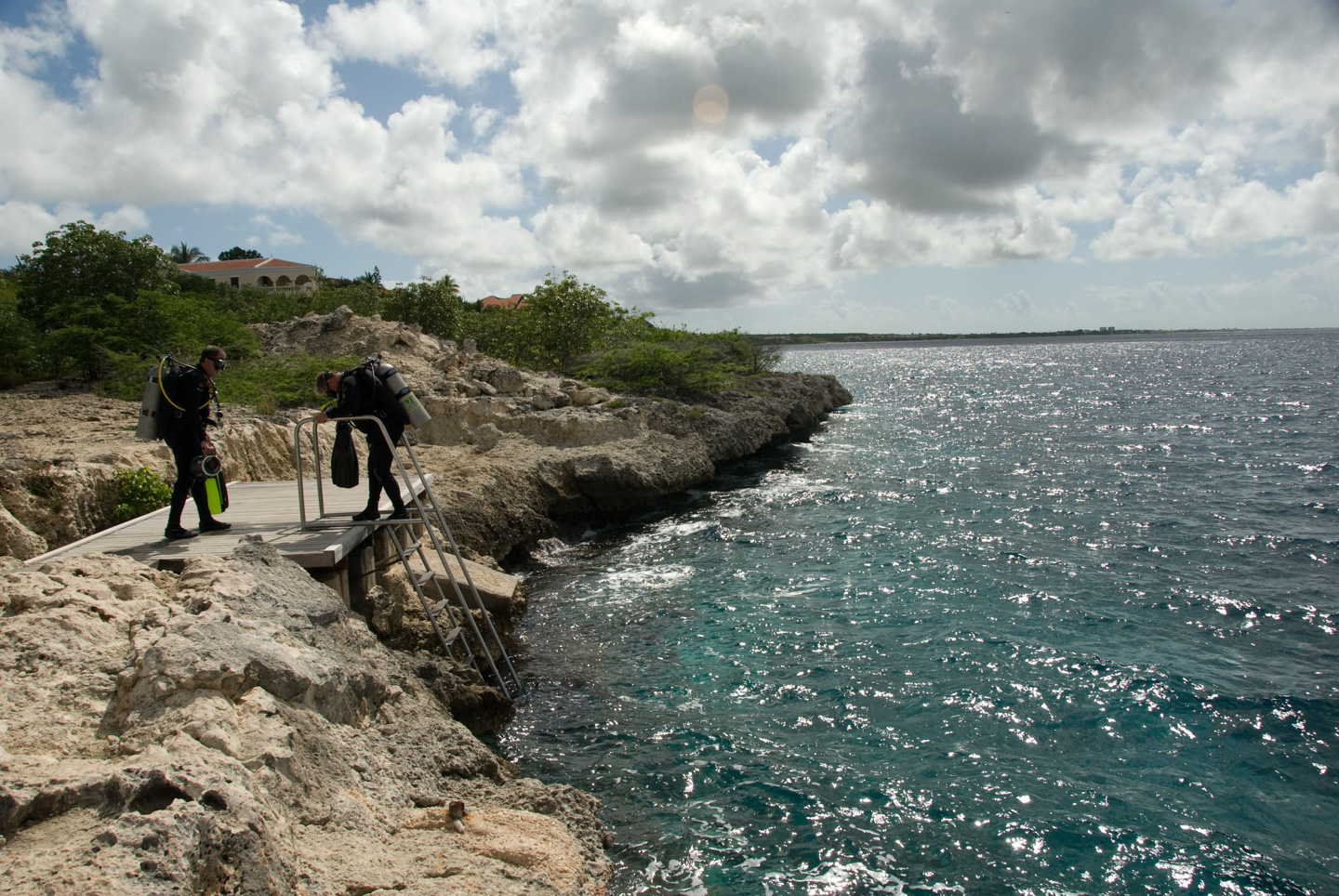 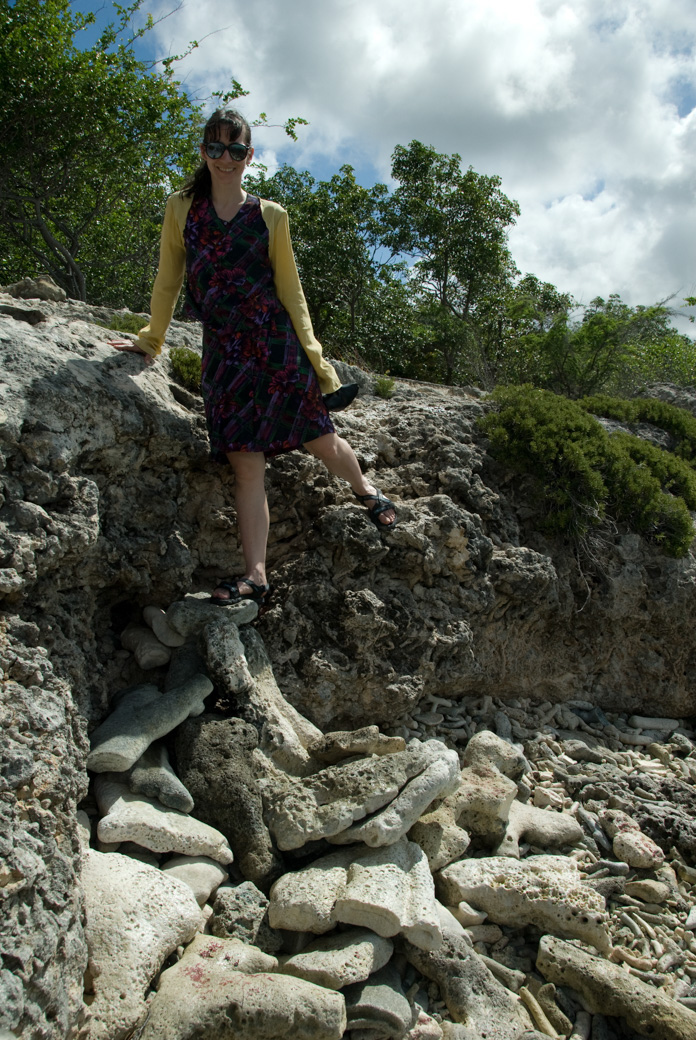 Every year, Anne gets itchy bumps on the back of her hand (& neck) by the end of the week. We think it is from too much sun, despite the excellent sunscreens (Aloe Gator and Blue Lizard sensitive) that we use. So Anne made herself a 'shrug' with extra long sleeves, to see if it would help. It might have been the fact that the 1st couple of days were cloudy, or it might have been the shrug, but by the end of the week there was only a hint of the rash 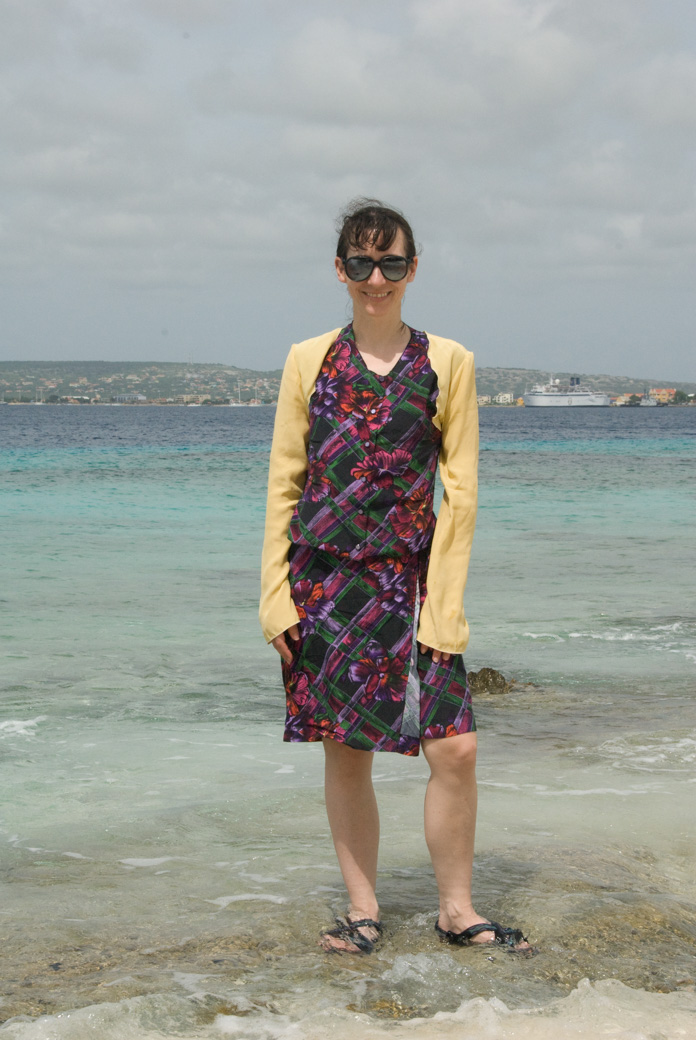 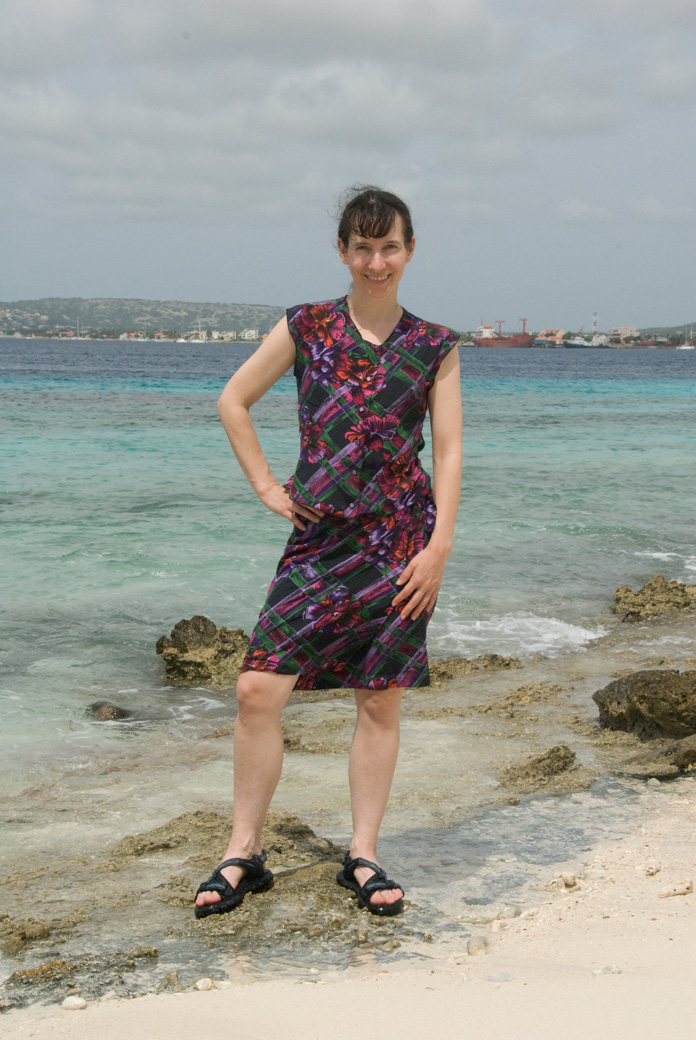 Bonaire is probably a great place to eat, if you eat fish. For vegetarians, however, the food situation is not nearly as attractive. One real delight, though, is Garden Cafe, which is a Lebanese restaurant. They have a great falafel plate. There is also a restaurant called Richards that is run by a Boston-area ex-patriot. They make a nice vegetarian plate up for us. We also have Chinese food one night, and pasts in the room on a couple nights

Luckily, the world series was being broadcast there (although the sound quality was awful), so we were able to watch some of all the games. Actually, we probably watched more than if we had been at home - and not on vacation

On change over the past few years is that cruise ships visit Bonaire. For many years, a ship called Freewinds has stopped there. Now, there, there are more stopping on the little island. While we were there, both the Crown Princess and the Emerald Princess stopped. They each stay for about 8 hours. These things are HUGE. They are floating 15-story, block-long high rises. The ships could be seen from all over the island. We have mixed feelings about the big ships stopping there. On the ones hand, they do provide some tourist money and give people a chance to see the island. But they are very seasonal. And these ships carry about 3000 passengers and 2000 crew. The population of Bonaire is less than 15000 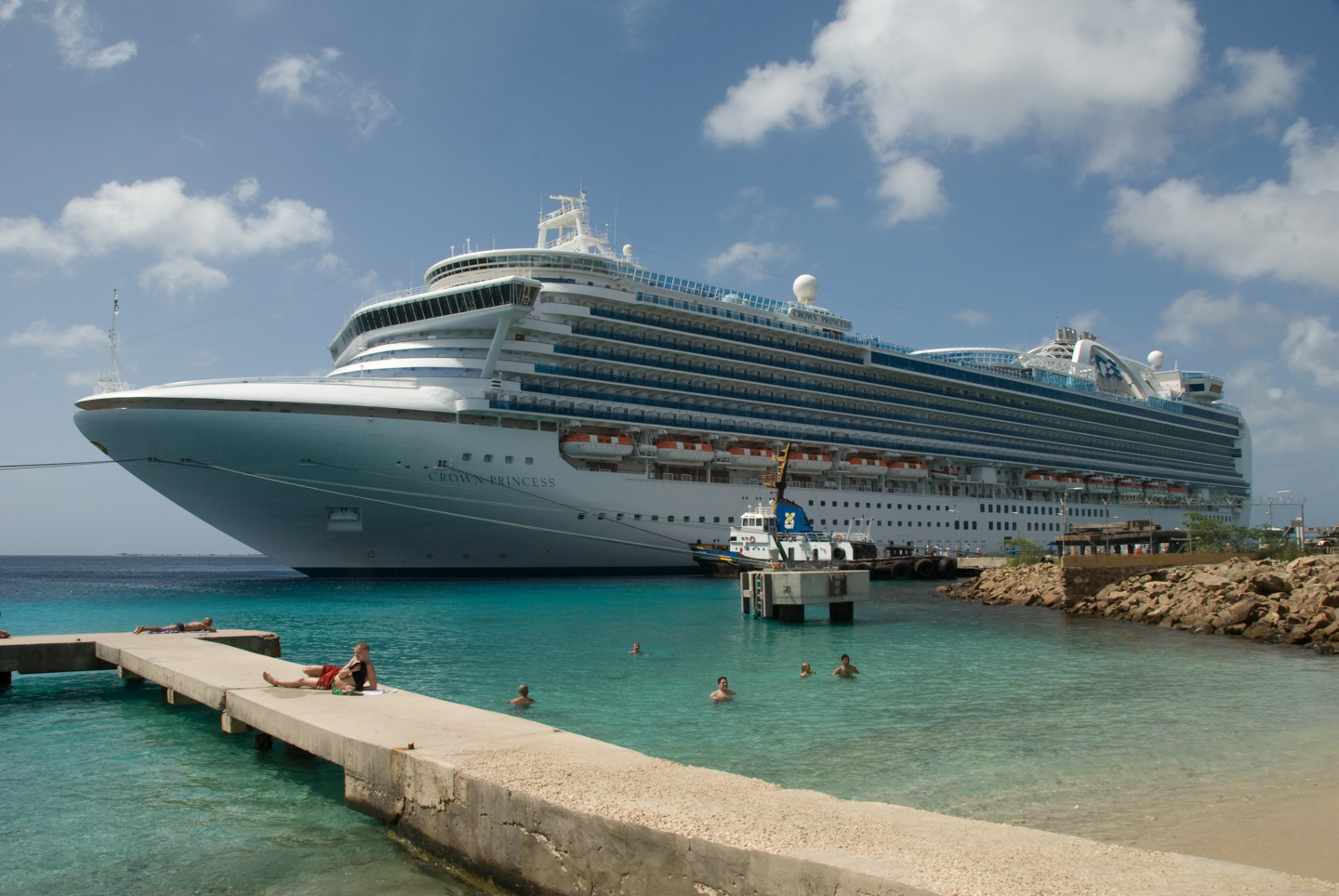 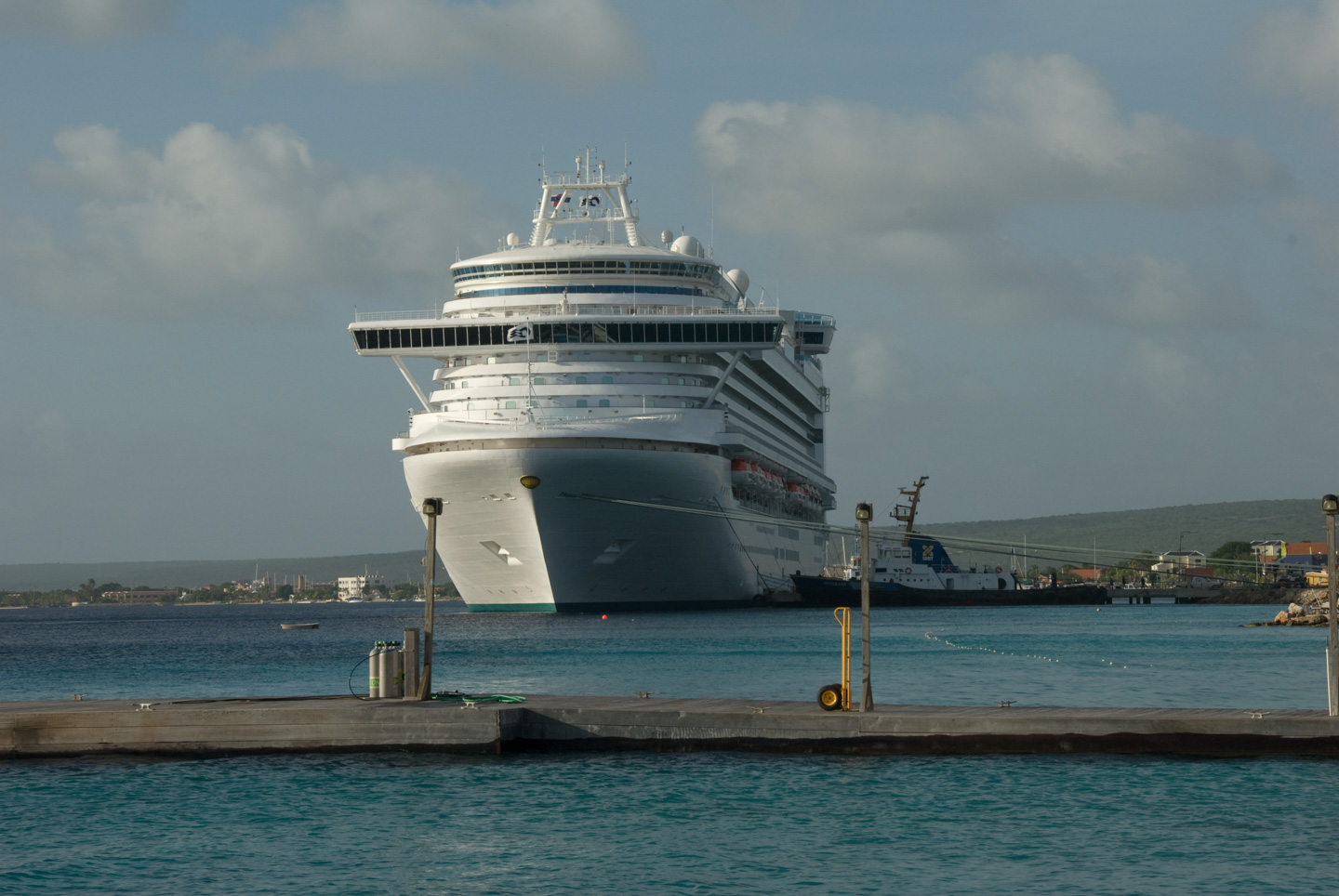 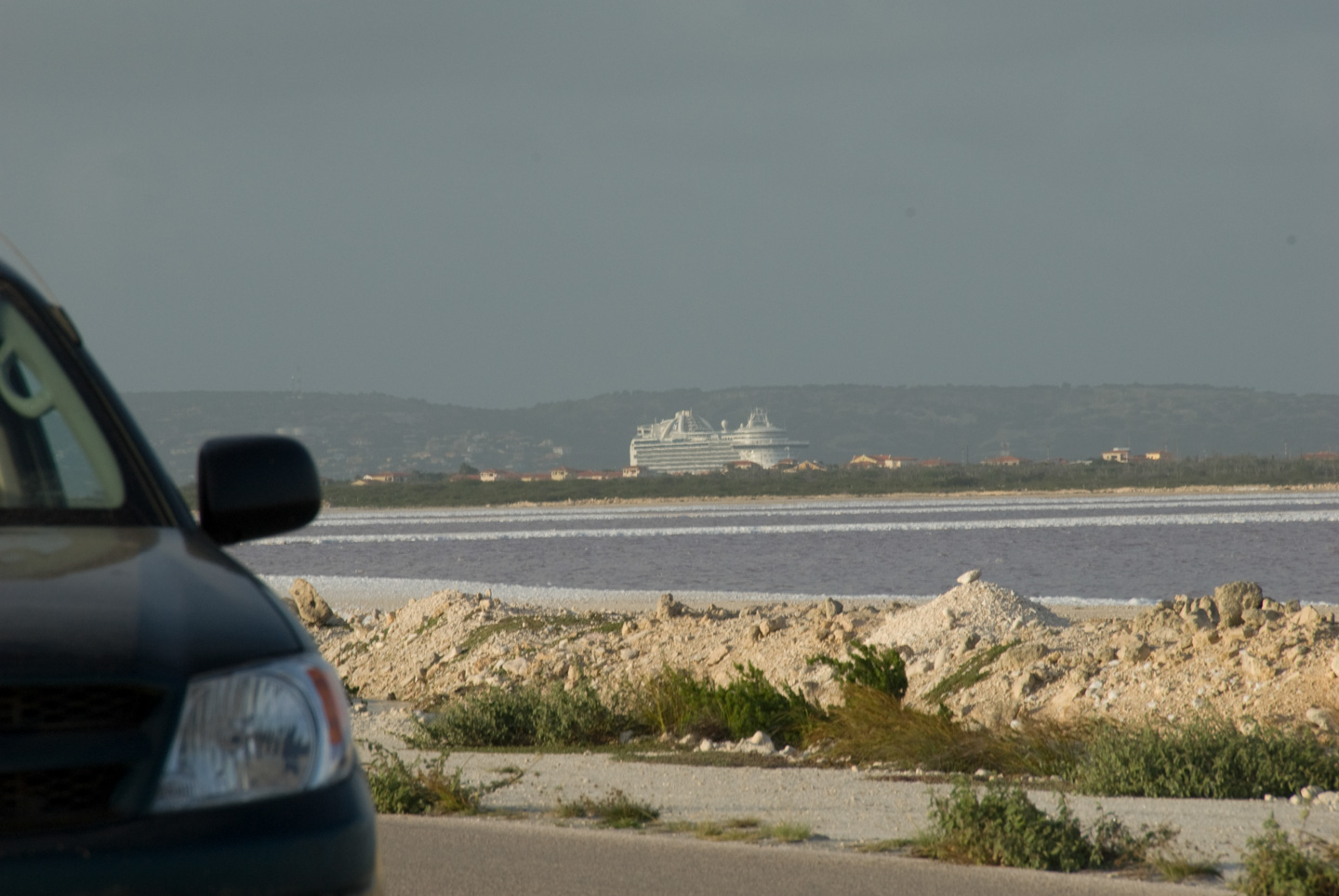 We had some great dives, although not too much that non-divers would ooh and aah about. We did see many octopus. We don't have an underwater camera, but some friends of ours went earlier in the year and took some pictures. So here are some underwater pictures of things we would typically see, courtesy of Scott Johnson. He has a number of others pictures (click on one of the Bonaire albums on his page). In order, the pictures below show a Fairy Baselet, Pederson Cleaner Shrimp, Lettuce Sea Slug with a cleaner shrimp, and Squat Anemone Shrimp (a favorite of Anne's) 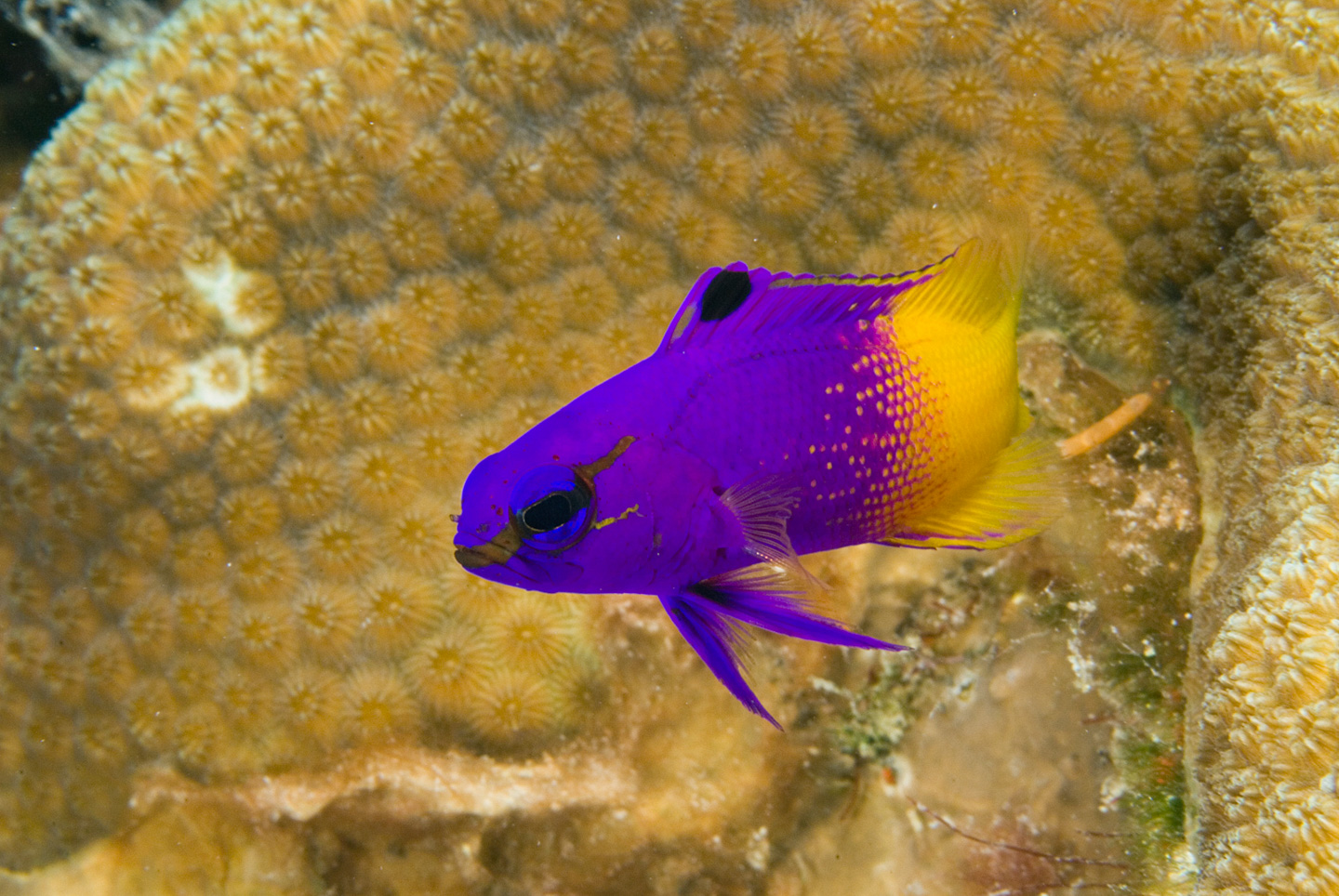 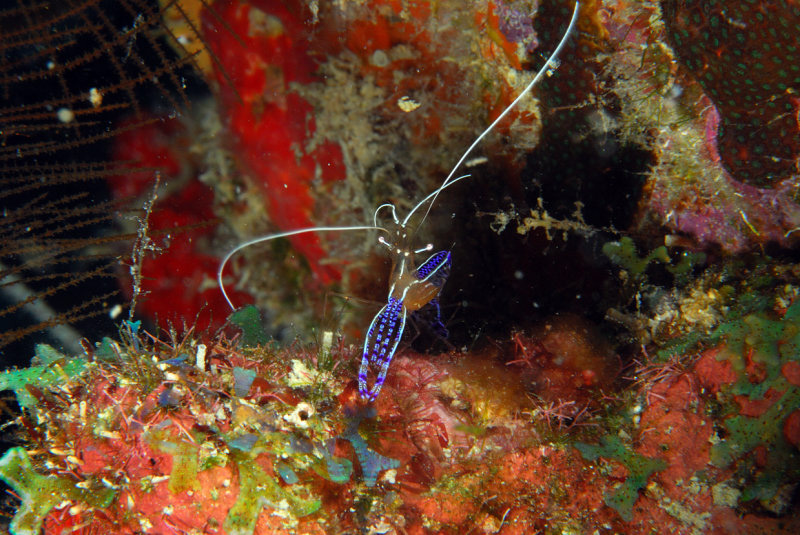 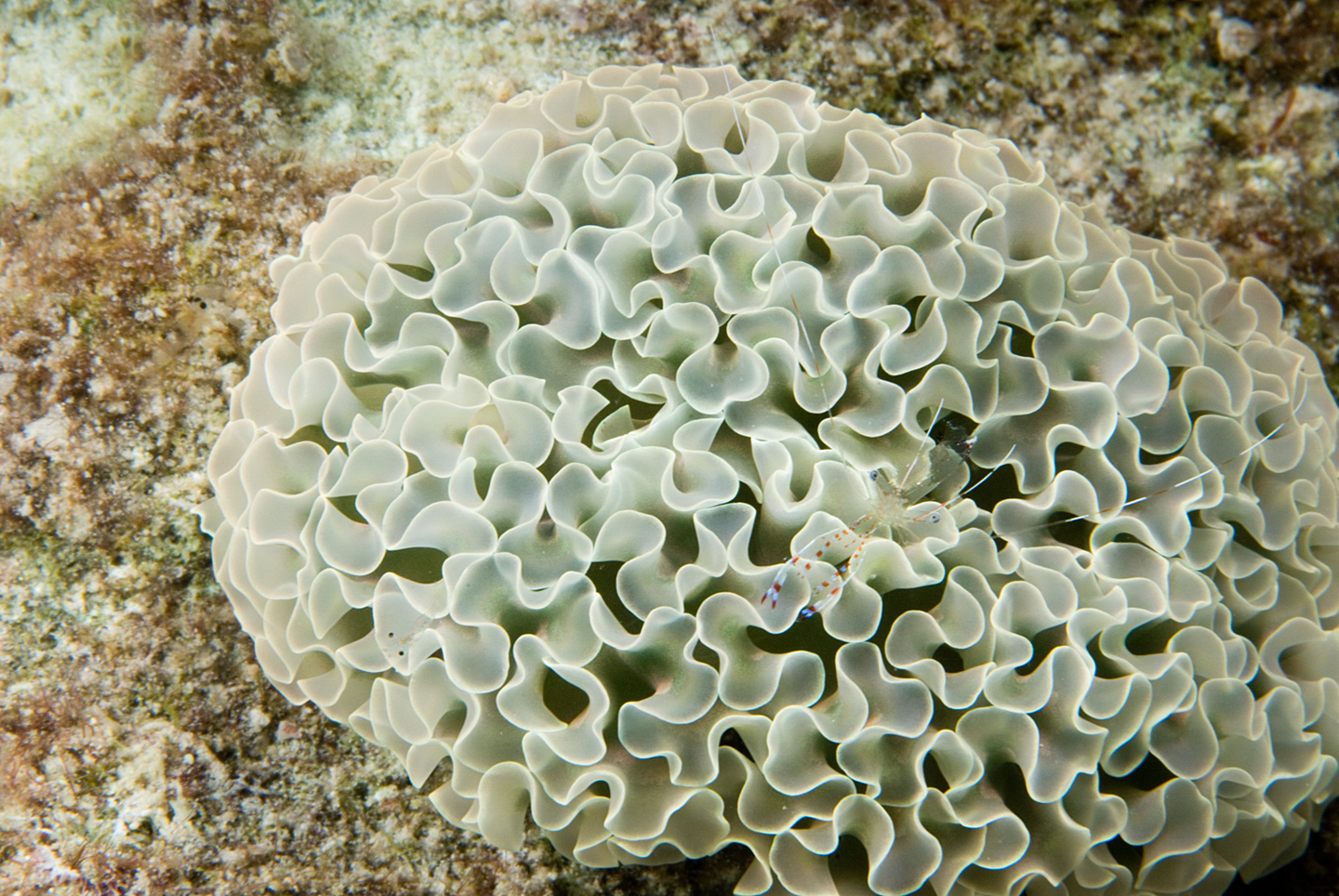 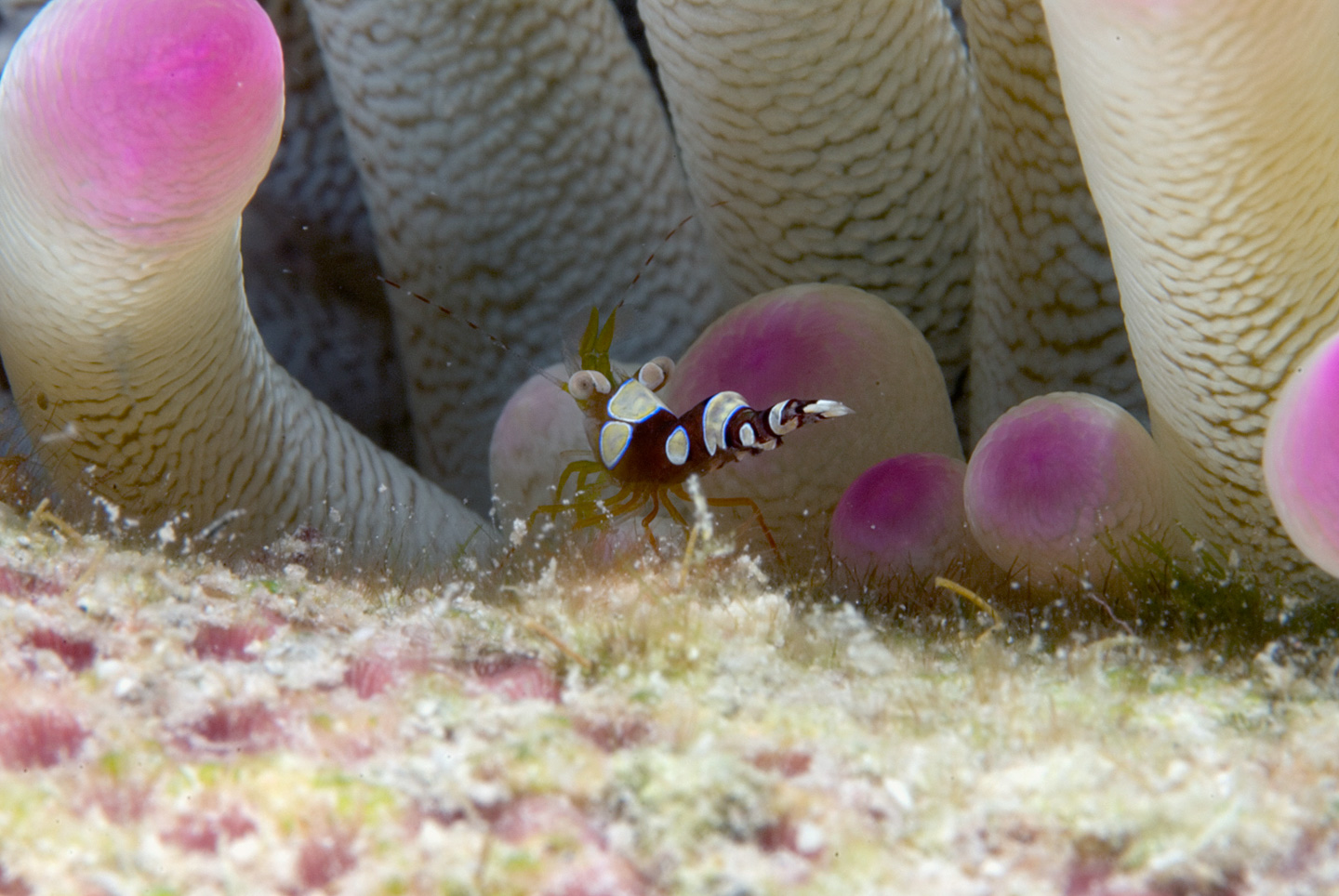