Camping in the White Mountains 2007

We had a great camping trip in September. We headed up on Monday (September 17th, 2007), and back on Friday. This is slightly later than our usual dates, but not by much.

We decided to go up to the White Mountains area again. There are soooo many trails to hike in this area, it could take years of coming here. We went along the Kancamagus Highway, but the apple vendor we saw last fall was not there. So after taking a clever short-cut that Anne found (Ok, it was a lucky wrong turn) we stopped at a different market and picked up some apples to have during the week. We bought some fresh apple cider from them also.

We arrived at Dolly Copp Campground, where we stayed last year. New site, though - the one we had before was occupied. This is a nice site also, with the brook nearby (although not as easy to get to as at last year's site). This campground has bathrooms with running water; always a pleasure. Some pictures from our campsite: 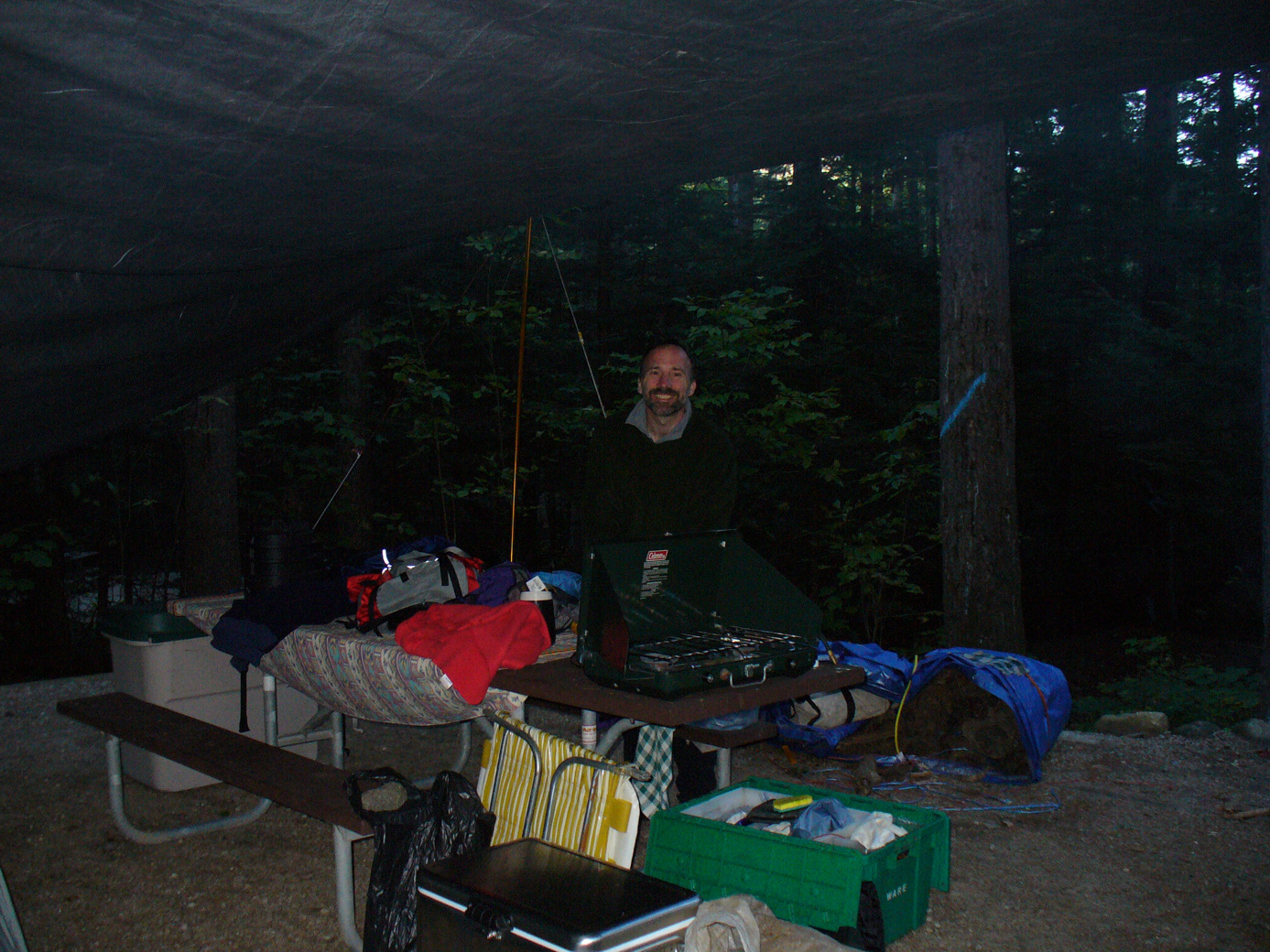 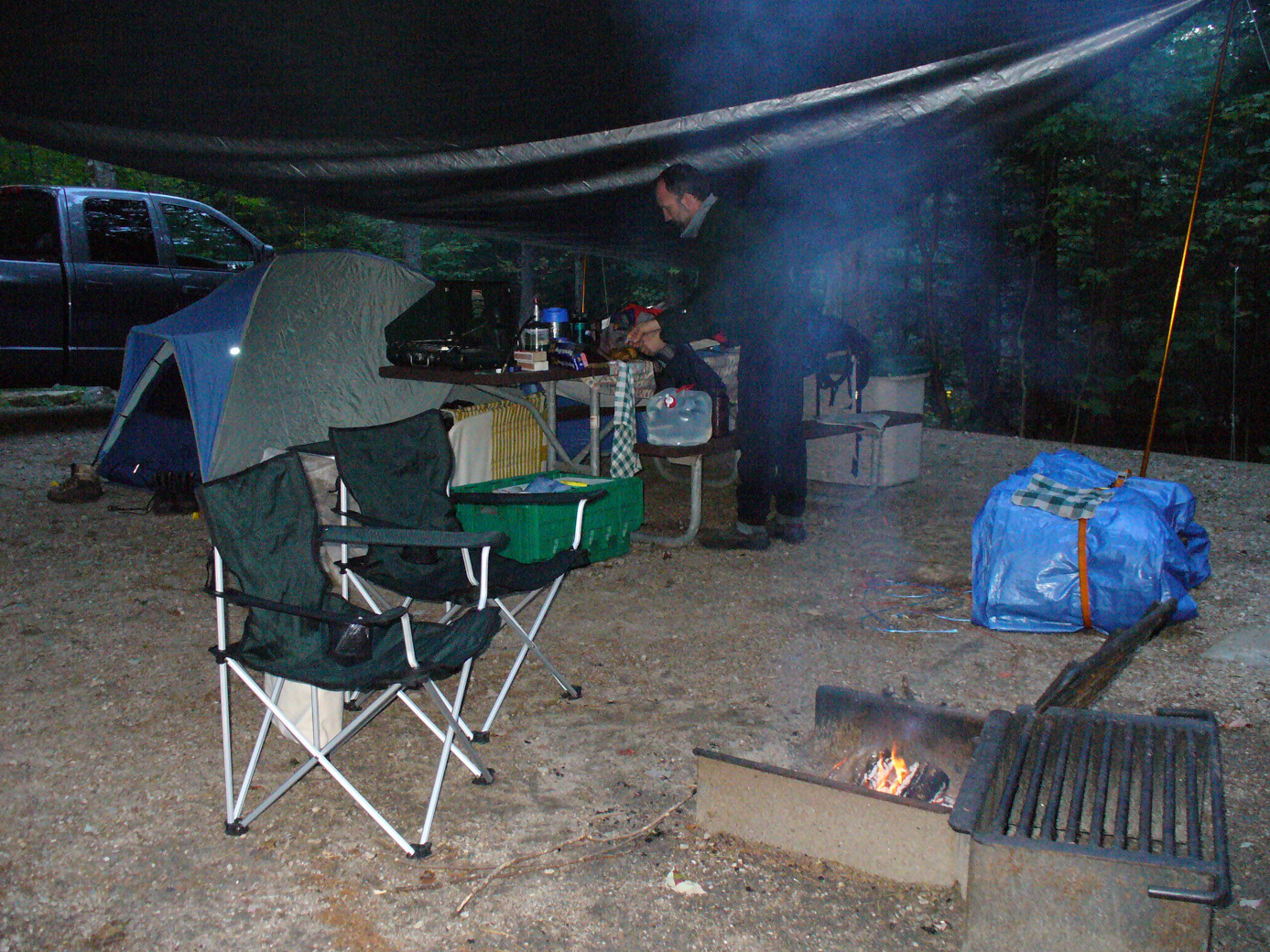 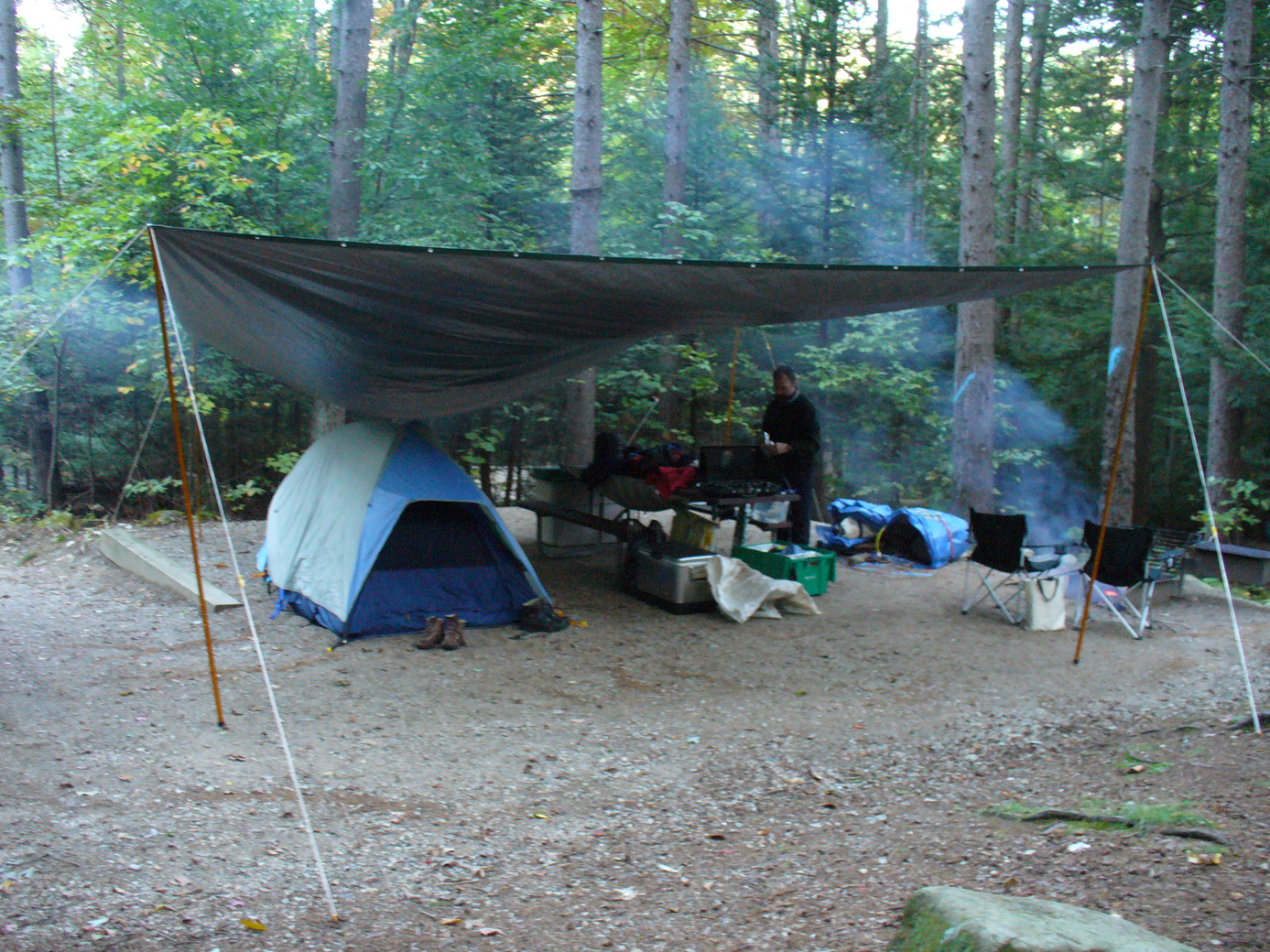 The 1st morning was particularly chilly, at 38' according to the thermometer in the truck. This was our big hike day. We went up the Daniel-Webster trail to the top of Mount Madison (4.1 miles each way, plus another .3 from the campsite to the trailhead, which is right in the campground). At the beginning of the trail we saw this encouraging sign: 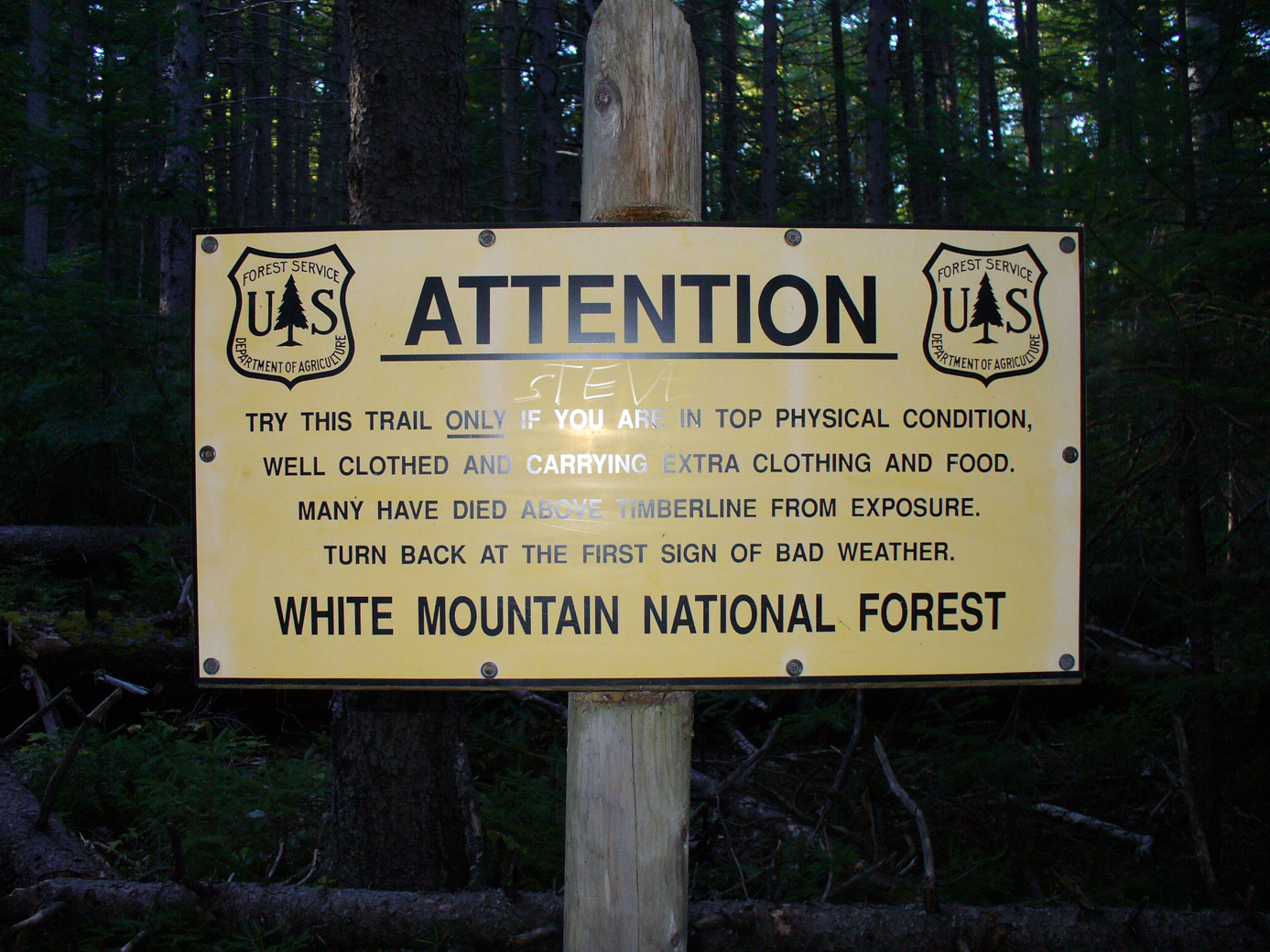 Despite not considering ourselves in 'top physical condition', we decided that it really wasn't necessary to turn back, so on we went. The 1st part of the trail is through woods with areas of view. Parts of the trial go through areas of the forest where logging has been / is allowed. You could easily tell the preserve sections apart from the more recently disturbed sections. Here are some of the vistas that could be seen in those spots with a view: 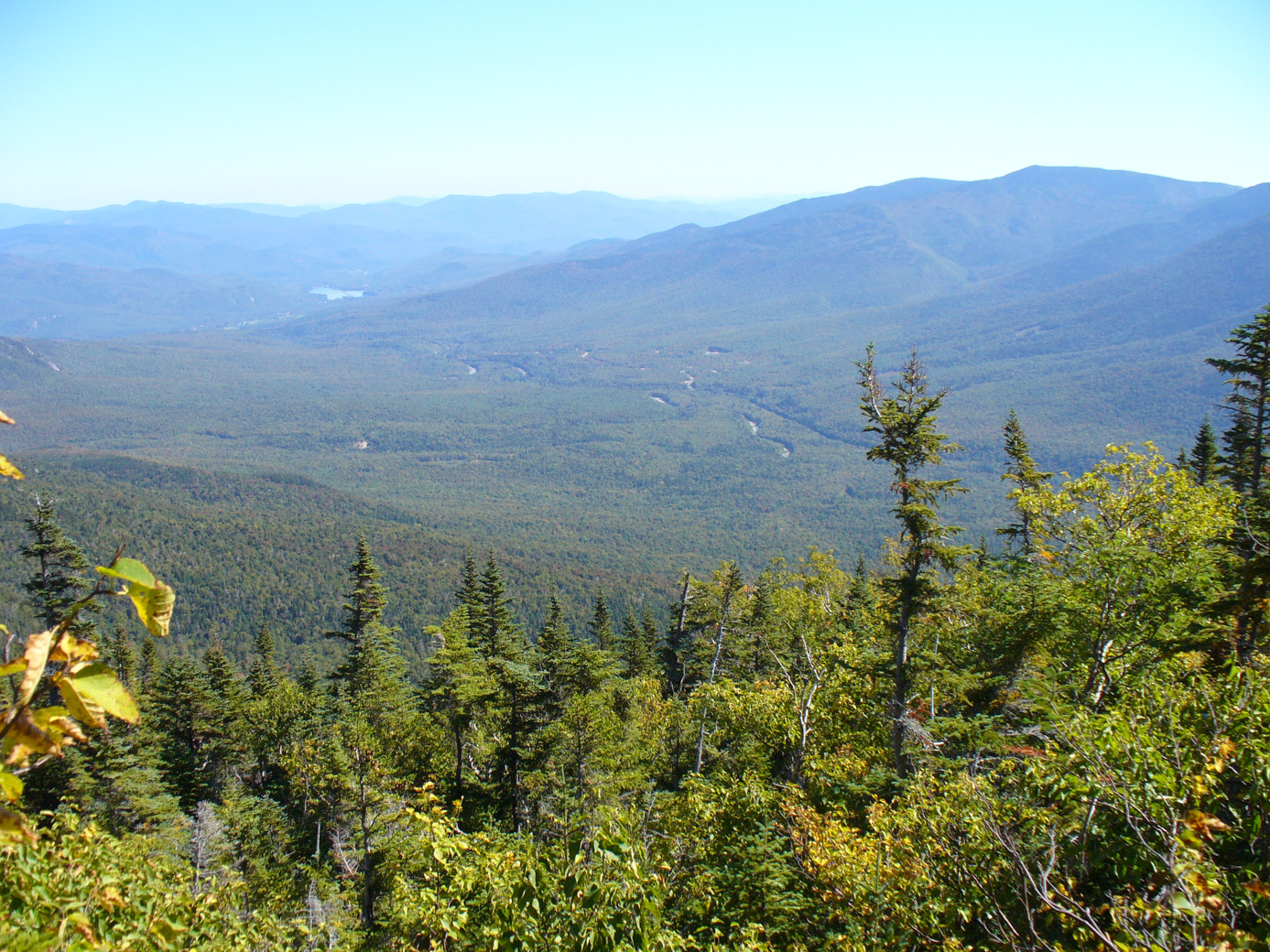 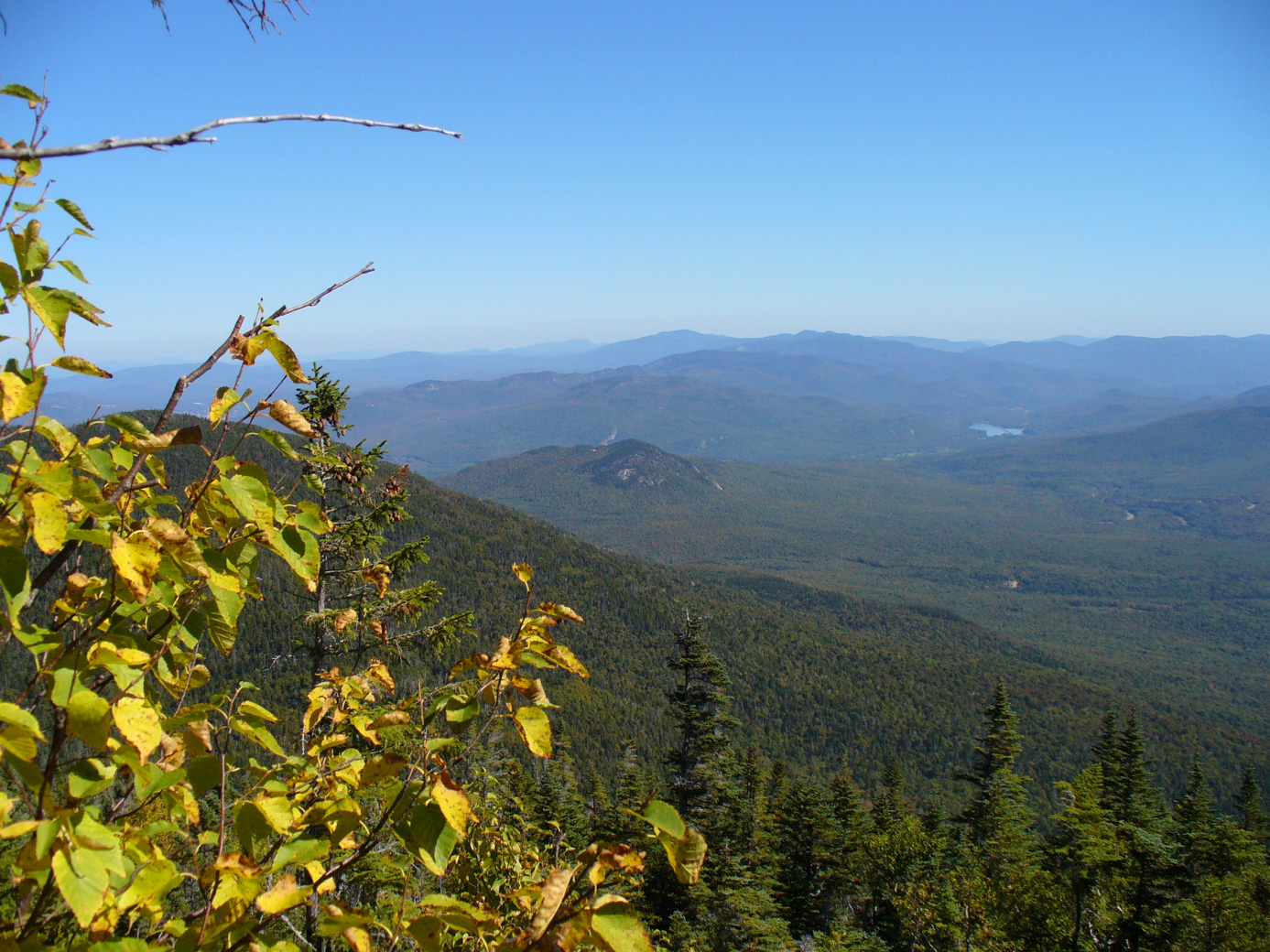 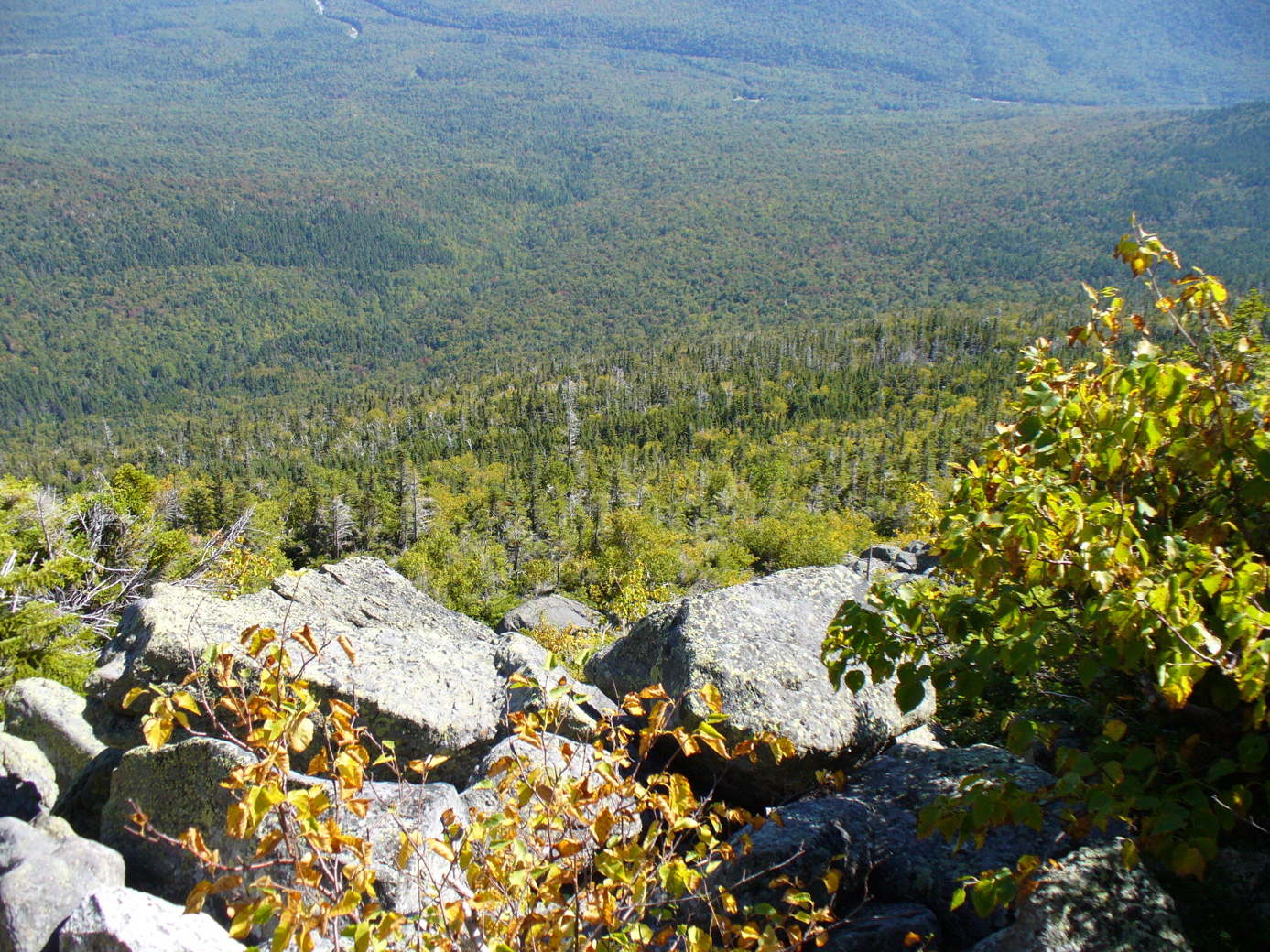 Above the tree line is all boulders and rocks (a scrape area). Before coming out was another one of those encouraging signs: 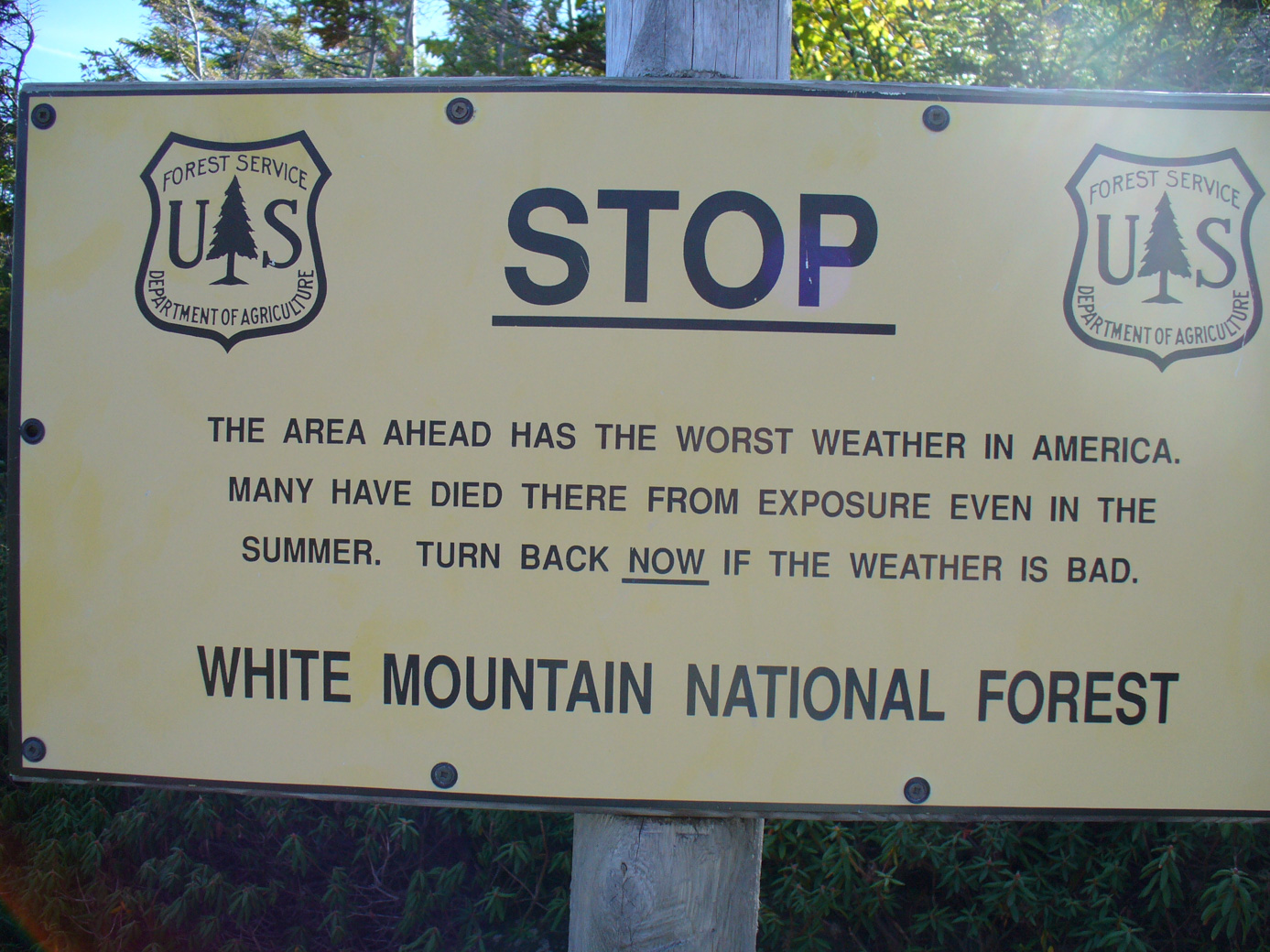 We had a lovely day, so one we went. (Seriously, this sign is a good thing because there is no shelter to speak of once you go above the treeline. So if the weather is bad, the best choice is to NOT go above the treeline.) Here are some pictures from the ridgeline and top of Mount Madison. The 1st is looking over to Mount Washington. You can see the Auto Road, and what looks like clouds over on the right is actually steam from the Cog Railway. 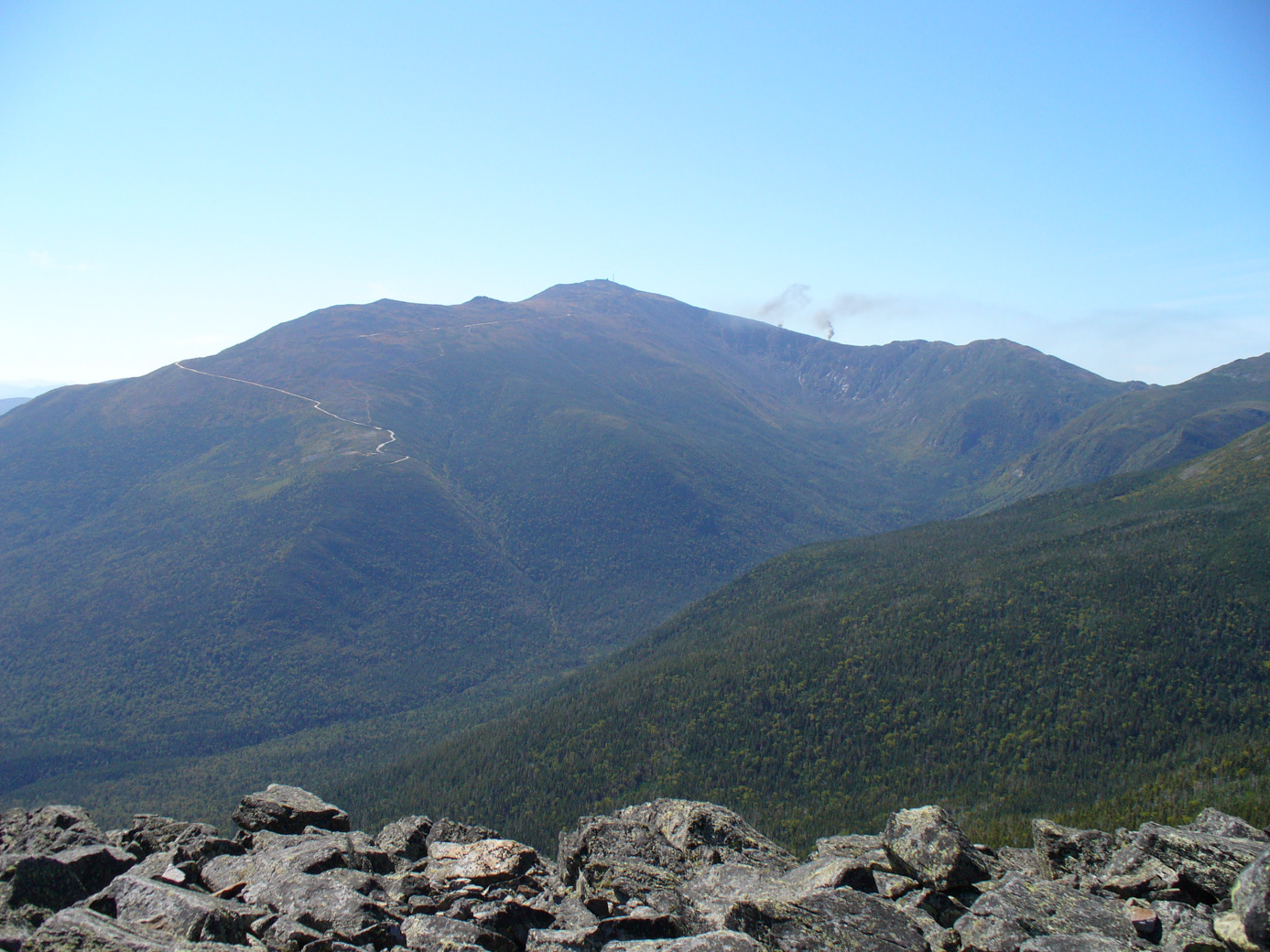 The 2nd is looking at Mount Adams (Mount Madison's peak is to the right, just off the picture). 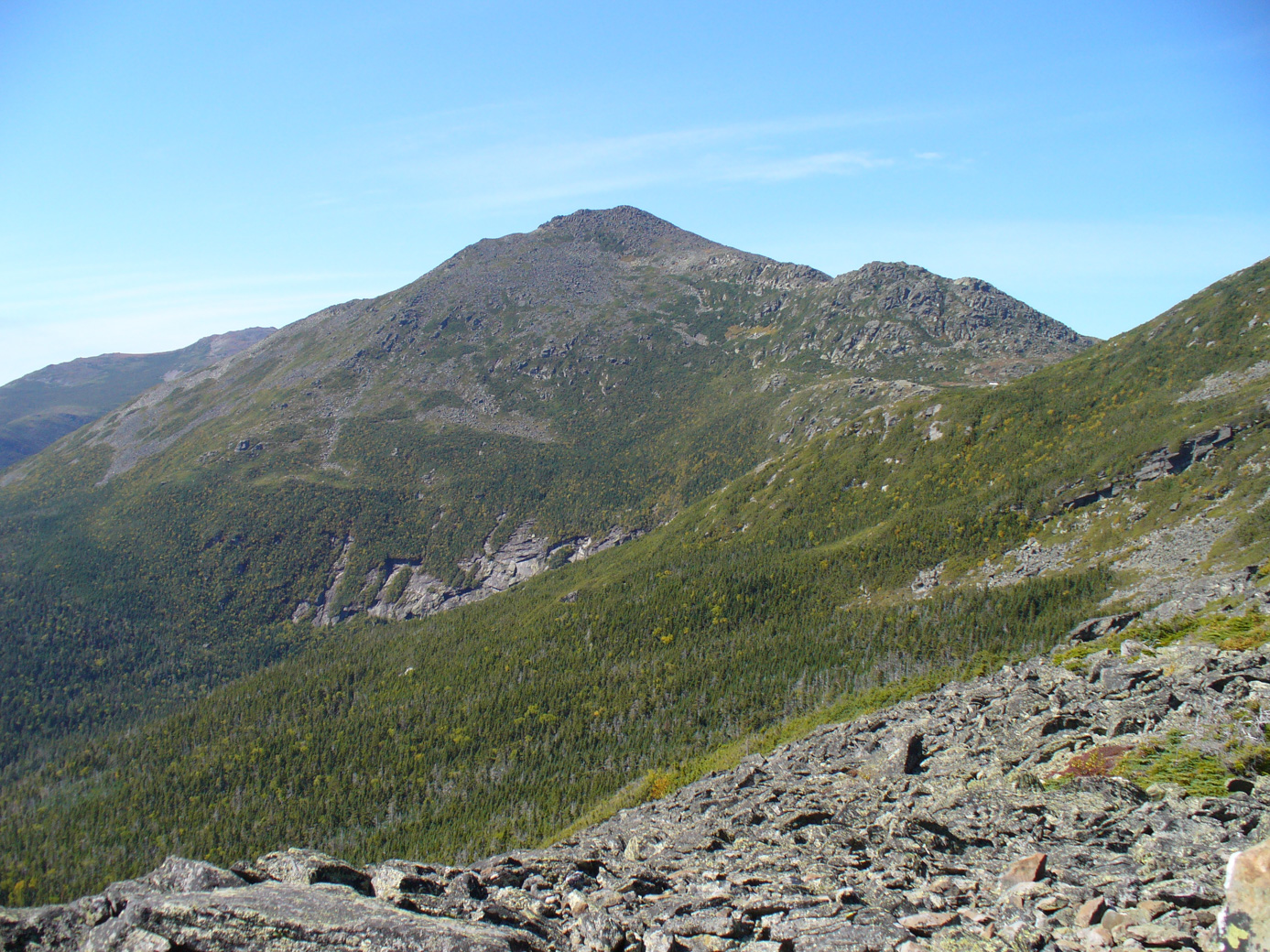 And here is Anne and Paul on their way up the ridge to Mt Madison's peak. 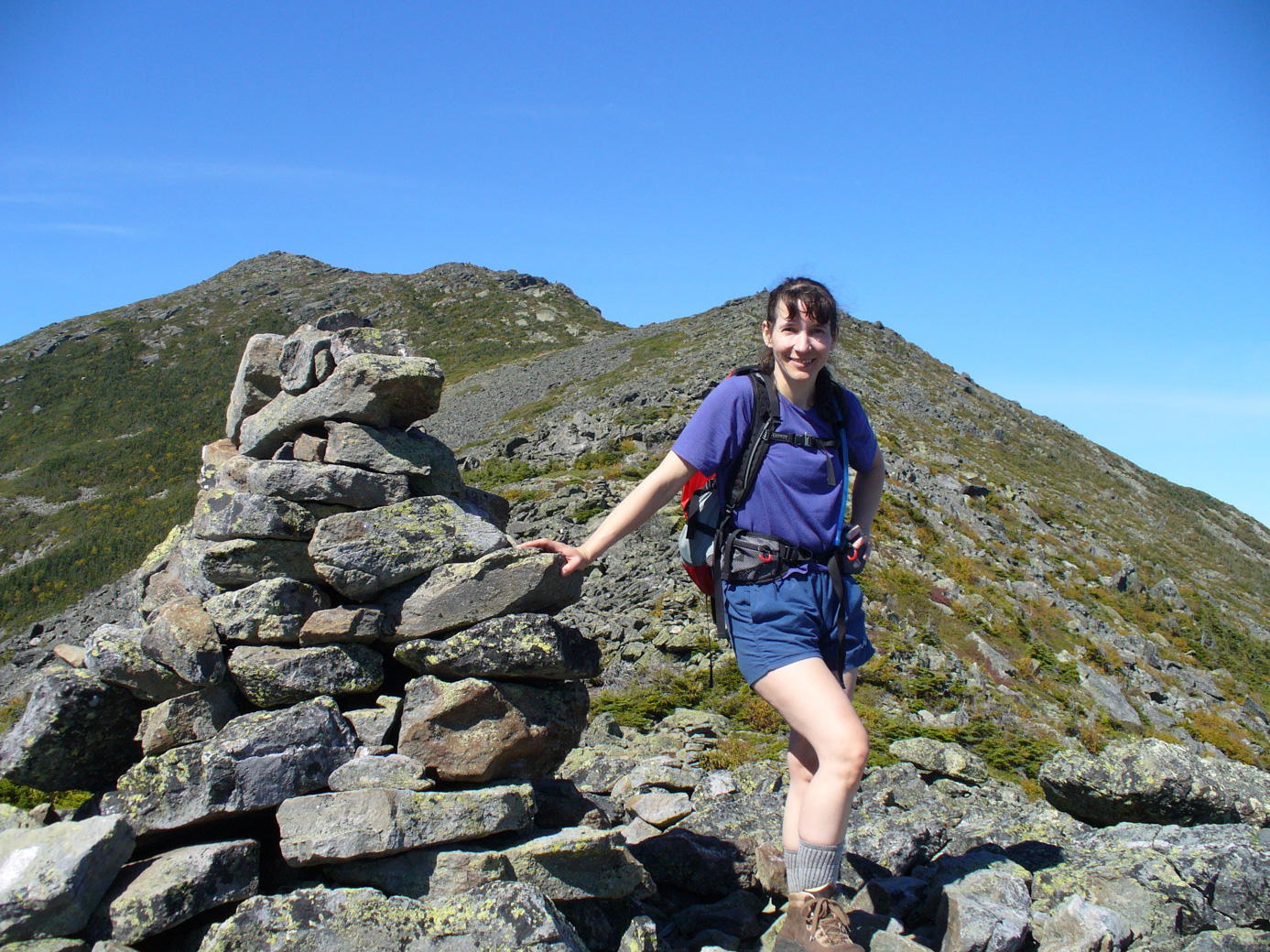 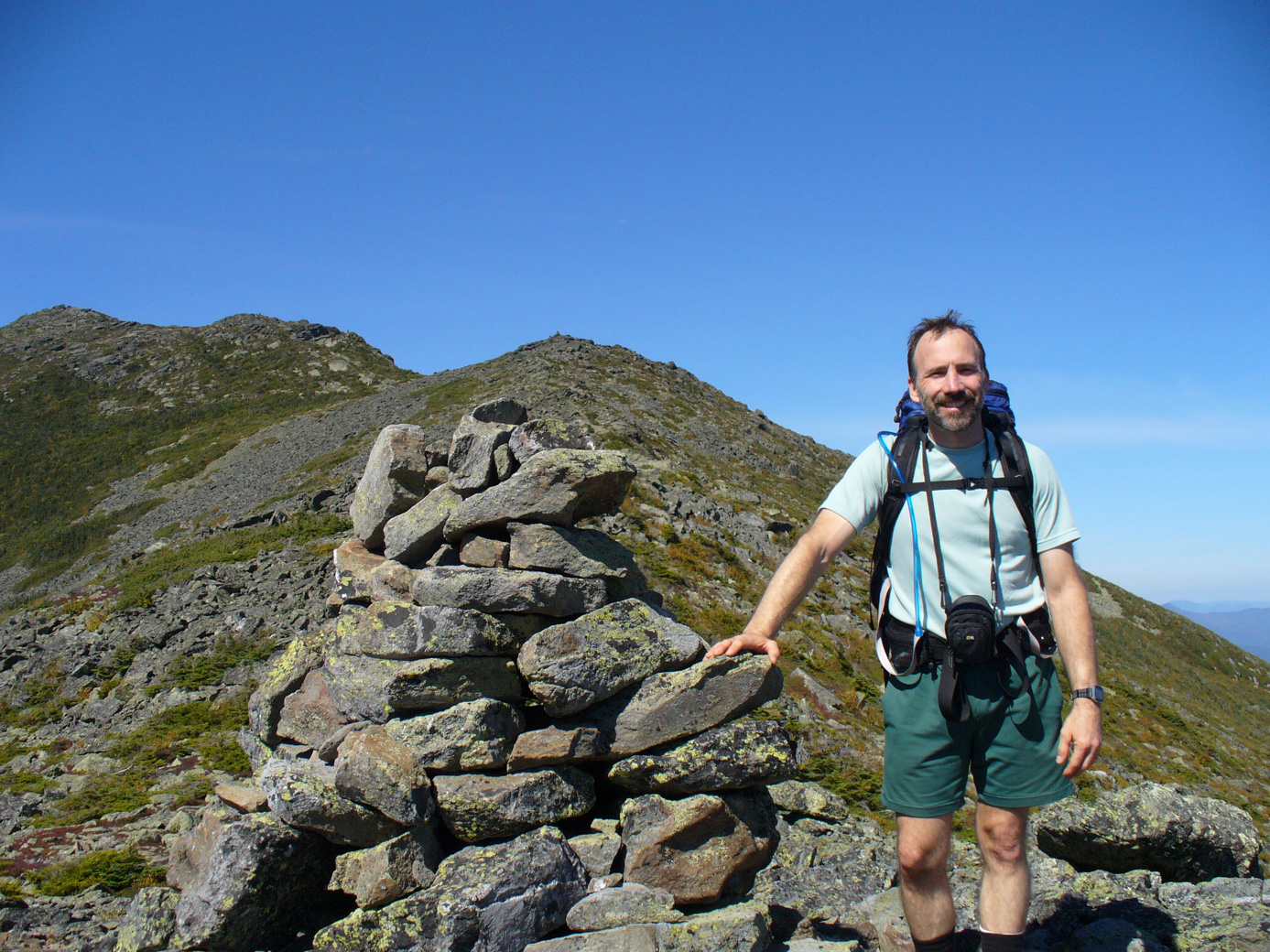 This one is is actually on our descent: 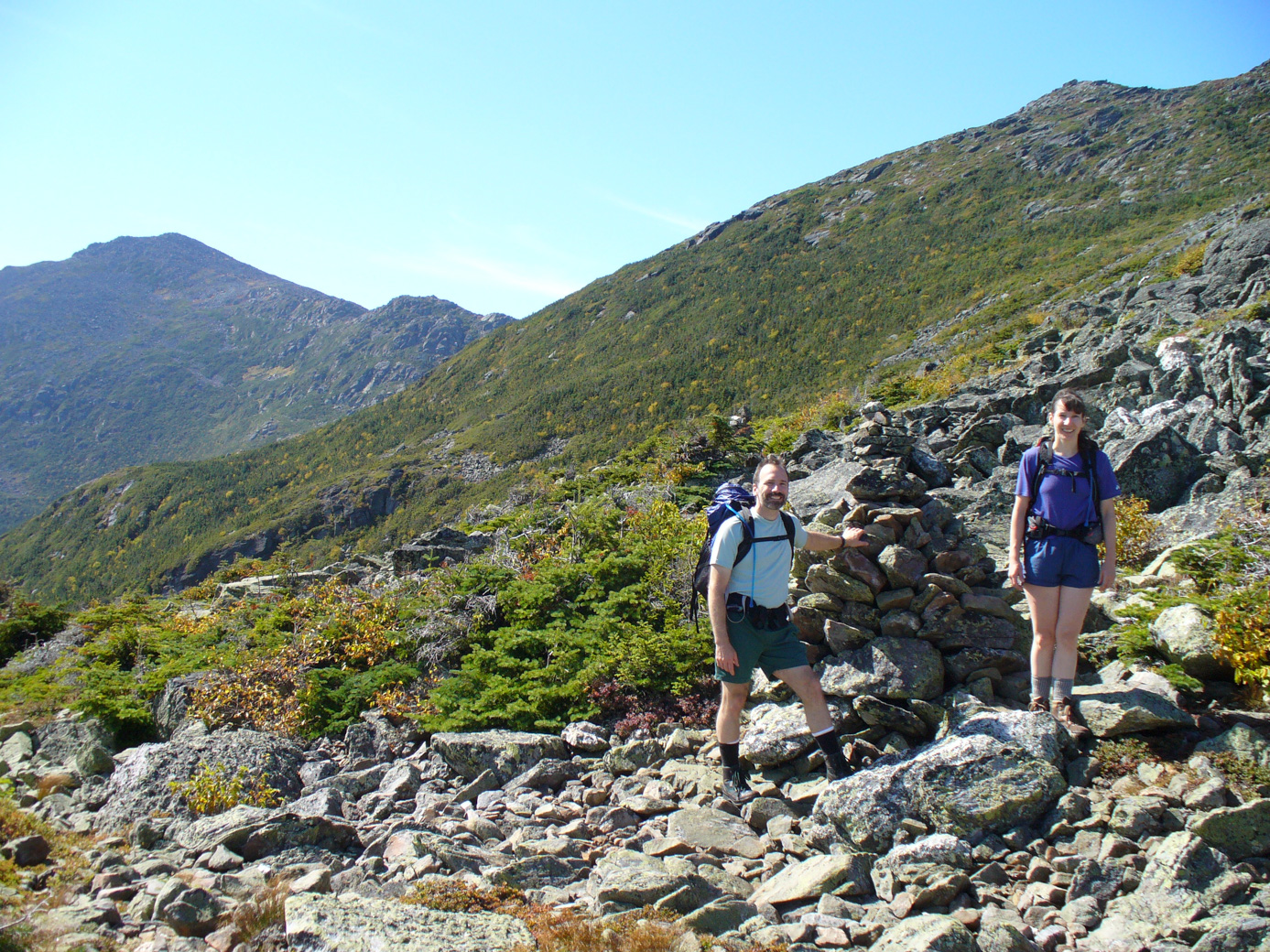 One of the highlights of the hike was a little weasel that was visiting the top of the mountain (they live lower down, we were told by an AMC member later). We saw it catch a mouse. He was pretty fast, so the picture isn't particularly good, but here it is: 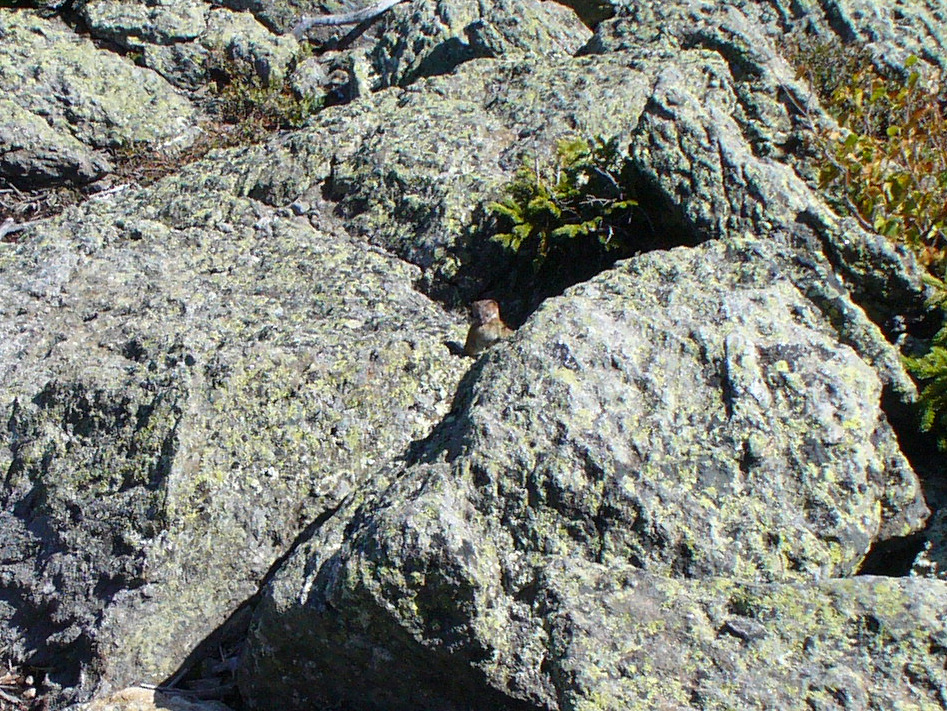 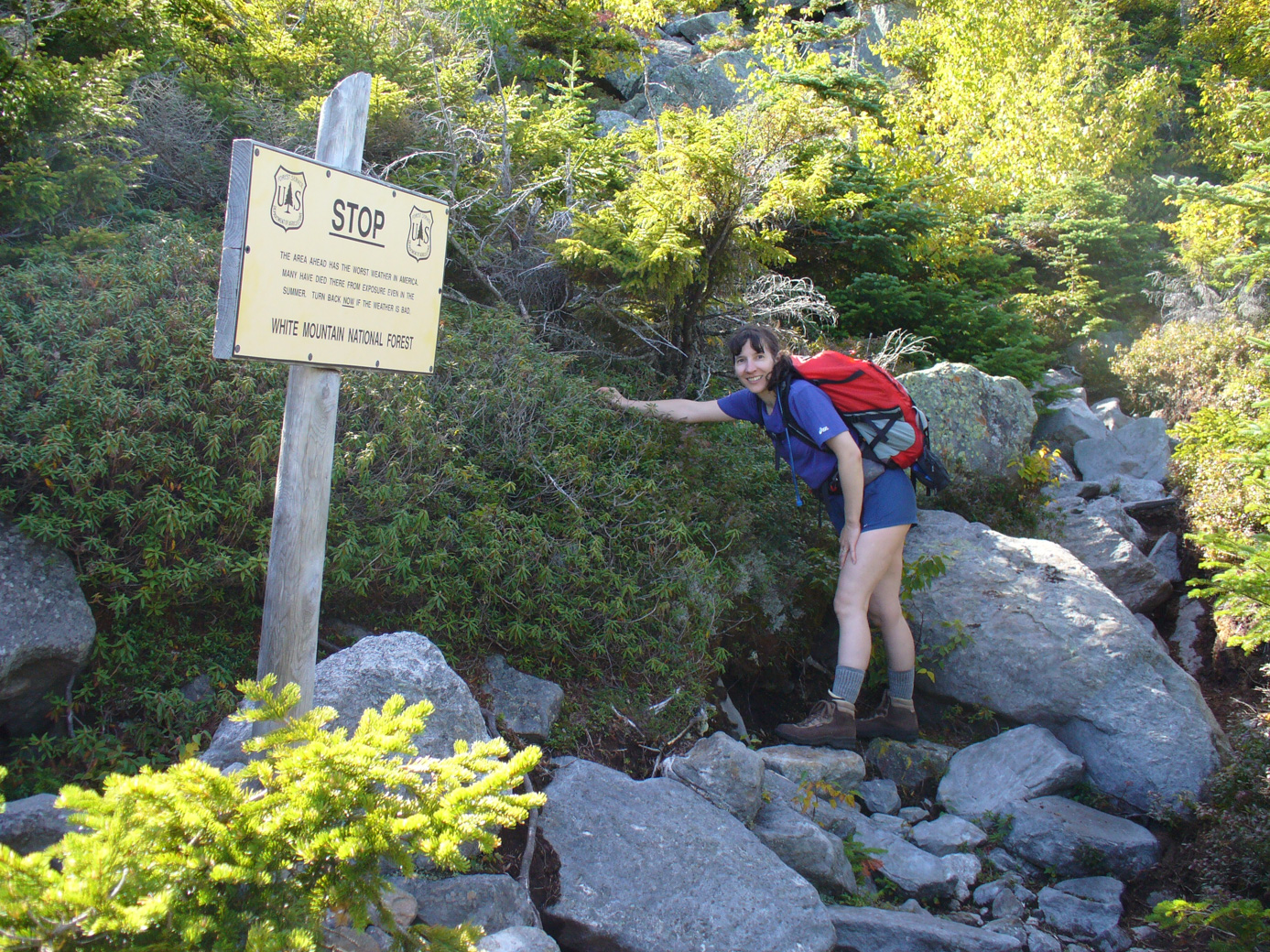 This next picture shows off our wonderful name-brand containers to carry water while hiking: the Nalgene water bottles that Kelly and Matt (name dropper that he is) gave us for the canoe trip, and the Camelbak containers that fit within our backpacks. We definitely used both types on the hike. 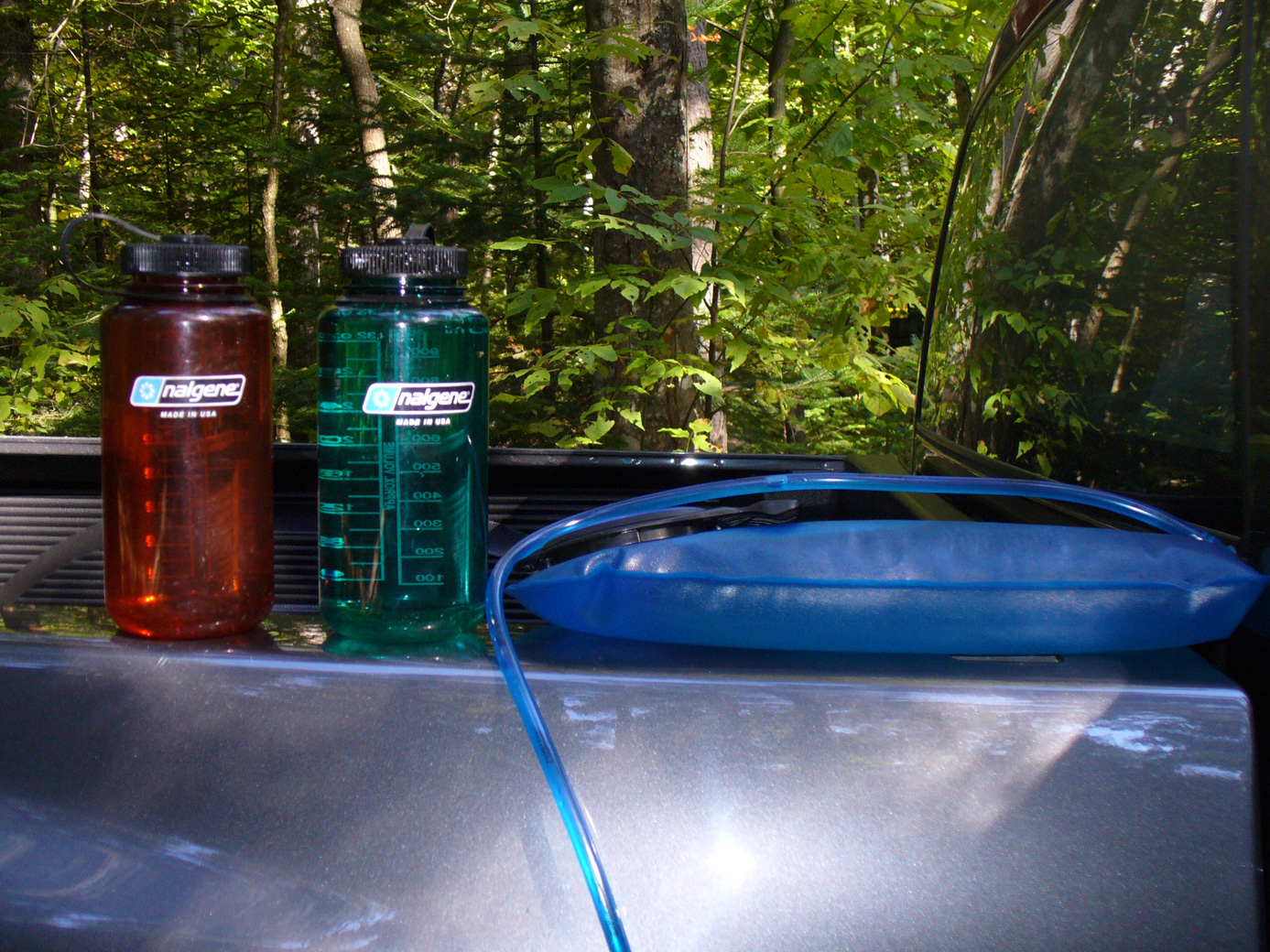 And yes, we had our s'mores around the campfire in the evening.

It warmed up each morning during the trip. It was 40' on Wednesday, September 19th. My knees weren't too bad from the hike the day before, but then again they weren't too good. So we decided to go down to the AMC lodge at Pinkham Notch, where they have a store, and bought me Leki hiking poles. (Turns out they had a great price on them, also! ) We then went to Attatash Ski Resort because we saw a bulletin board that they had an alpine slide, but it was closed for the season. Very sad. So we moved on to hike 'The Imp'. View from our campground; note the resemblance of the rock face to, well, a face! 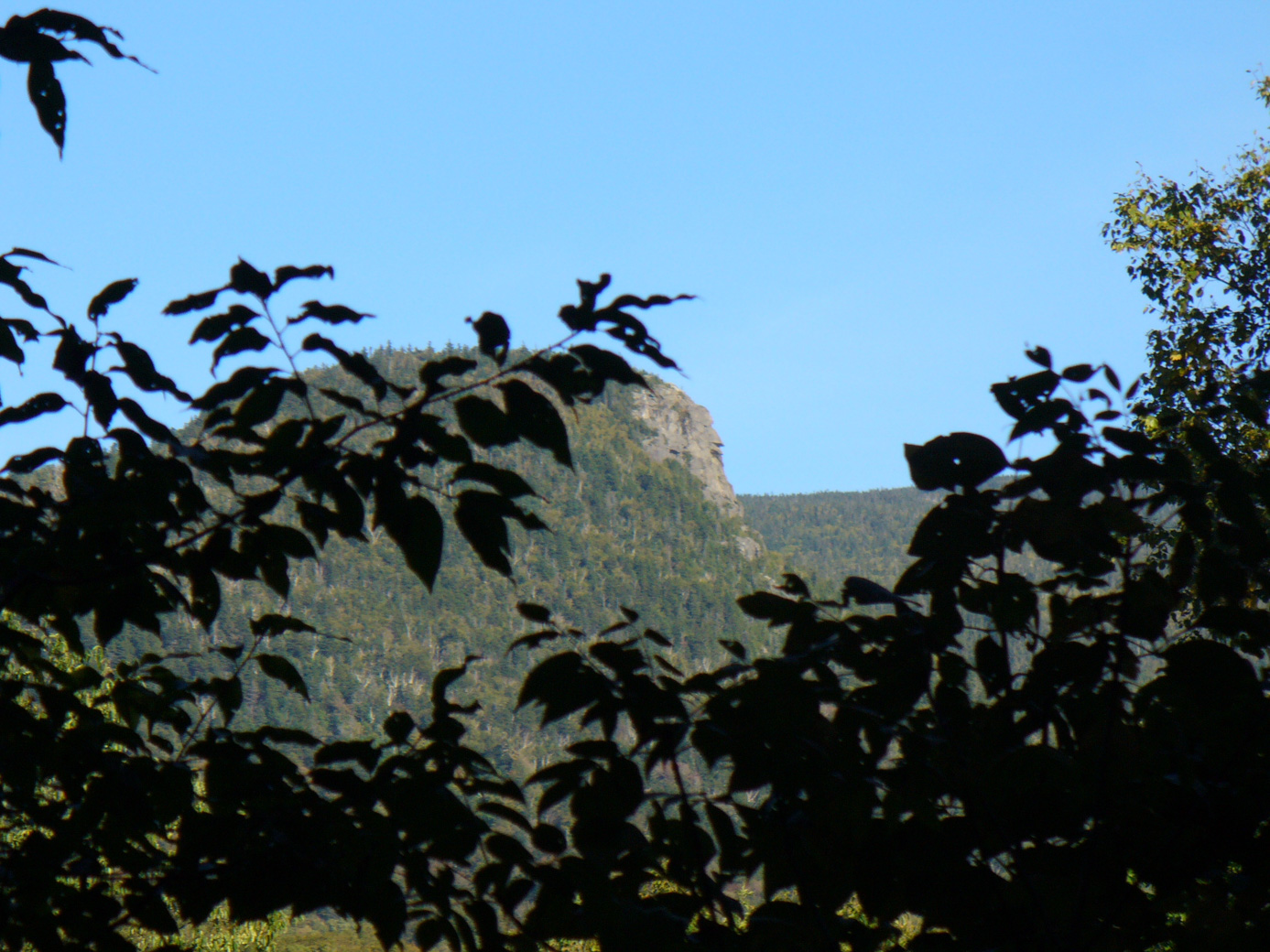 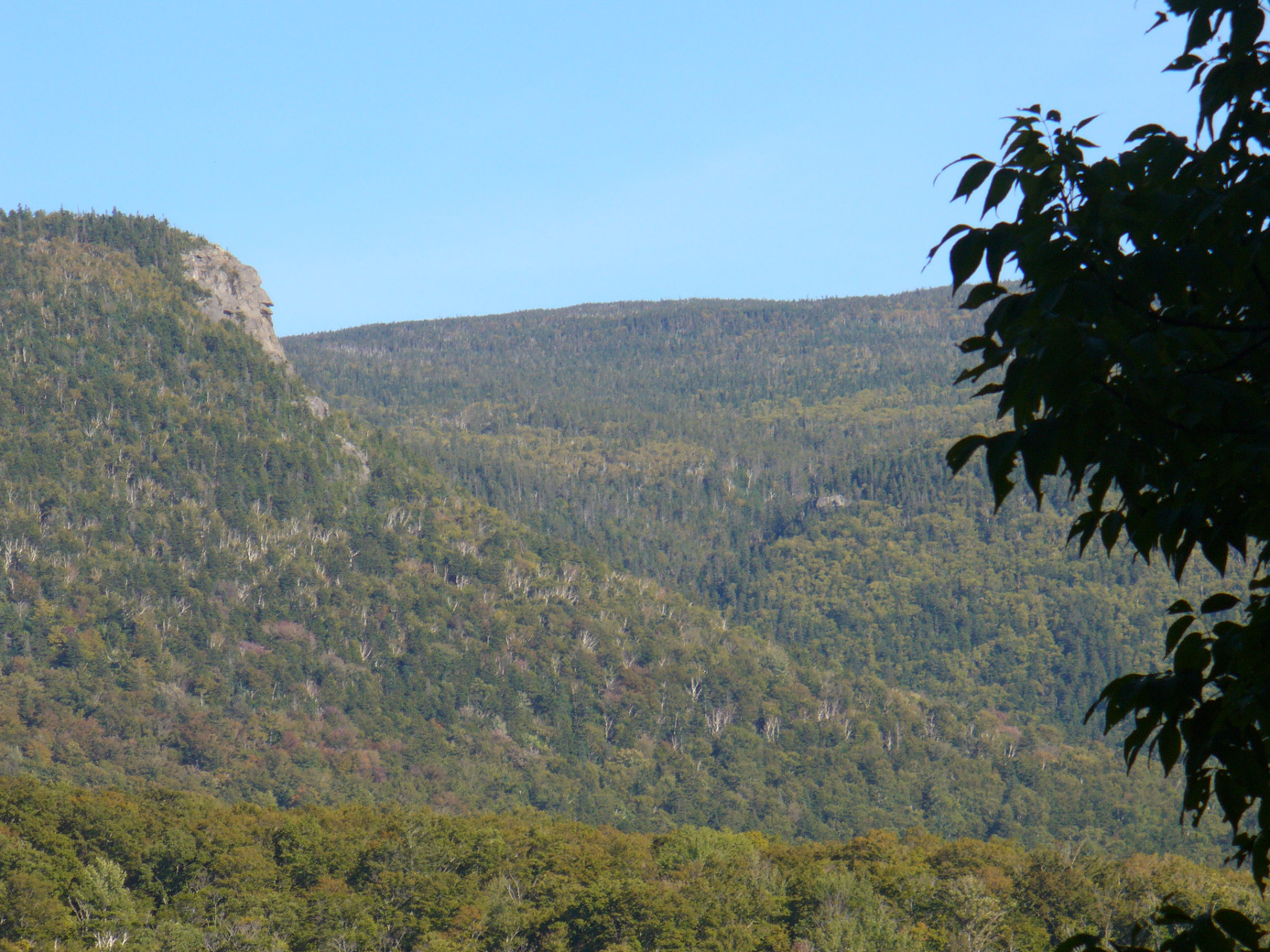 This is a great hike. It starts through a pretty woods with a stream near it. The face outcrop is reached after about 1.5 hours. Of course, you can't tell it's the imp face from on top of it. But it gives a great view of the ravine and the mountains, and the woods are very pretty there. Here we are on the face top, with Anne showing off her new poles. 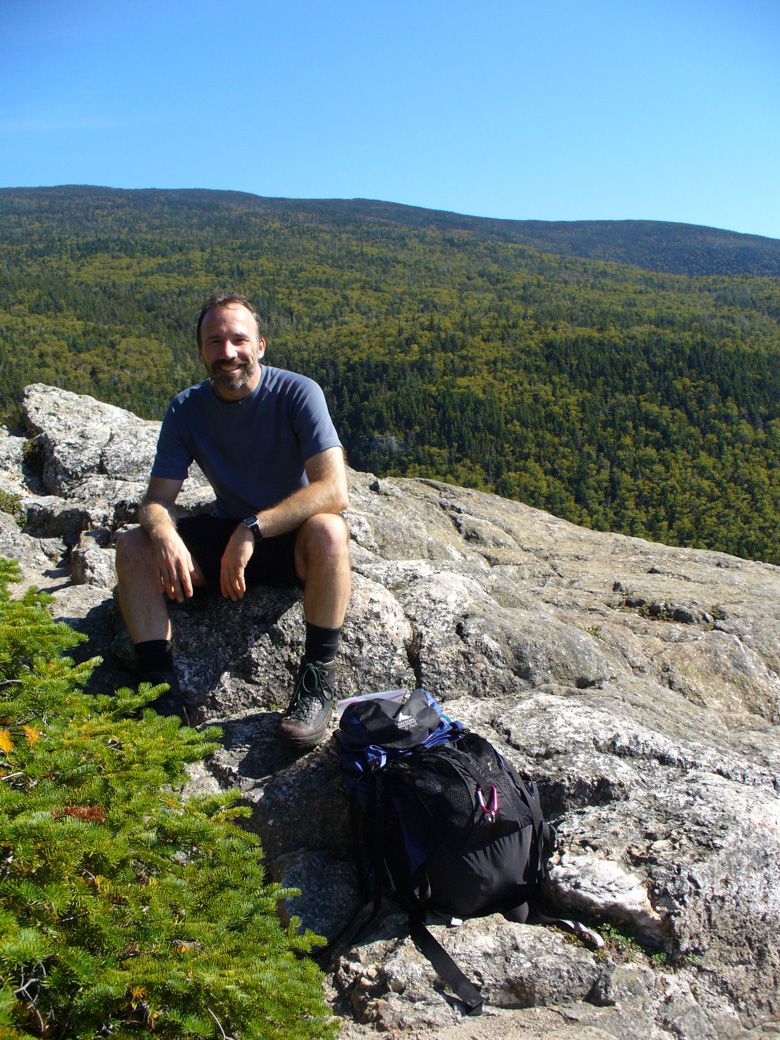 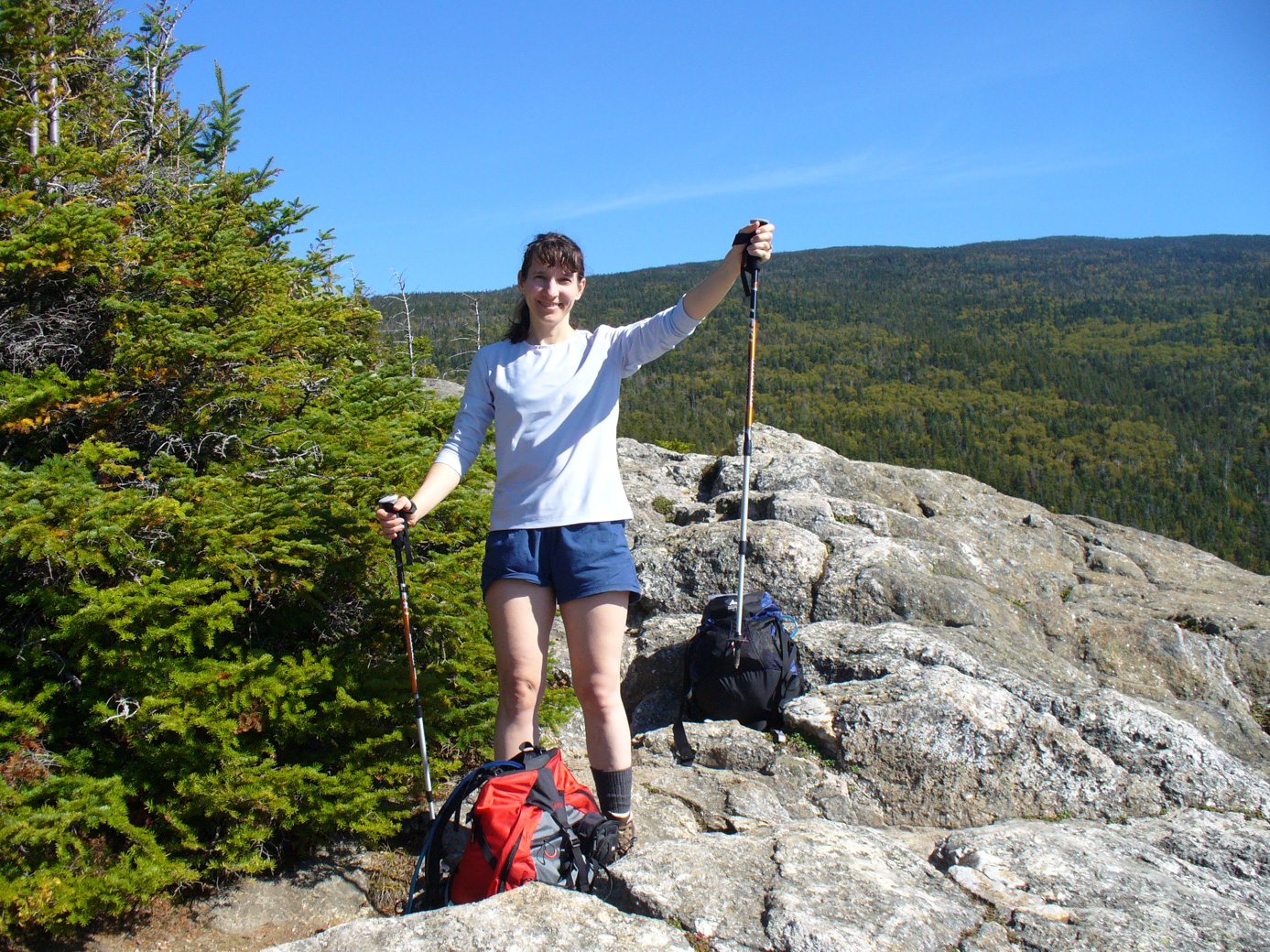 The trail then goes down an unlikely looking rock path then into a section with a lot of tributary brooks (to the Imp River). This would be a difficult hike in cold weather. There really weren't any viewpoints after the Imp face, but it was still a beautiful hike. Hopefully these couple of pictures will give an idea of how pretty this hike was. 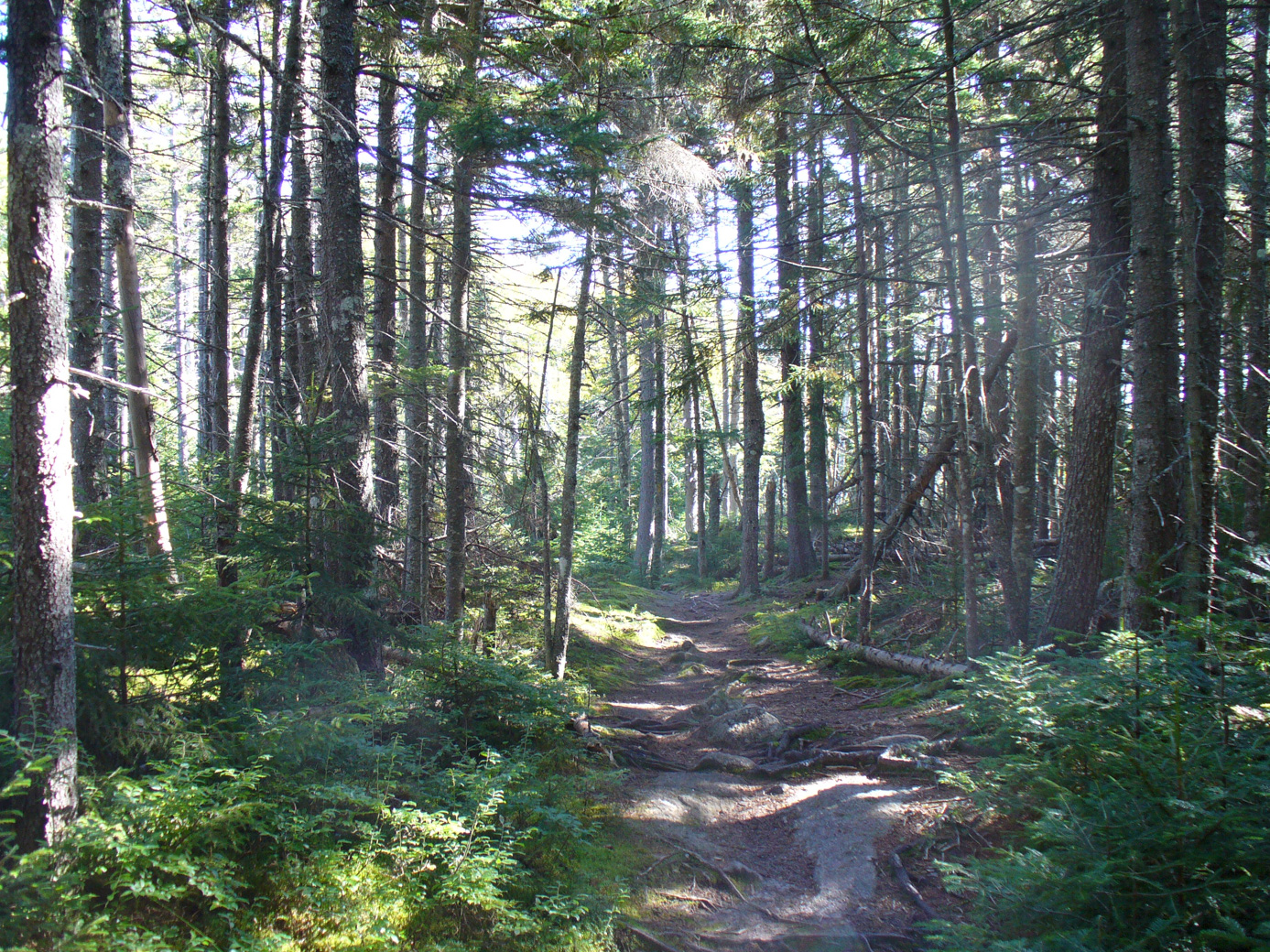 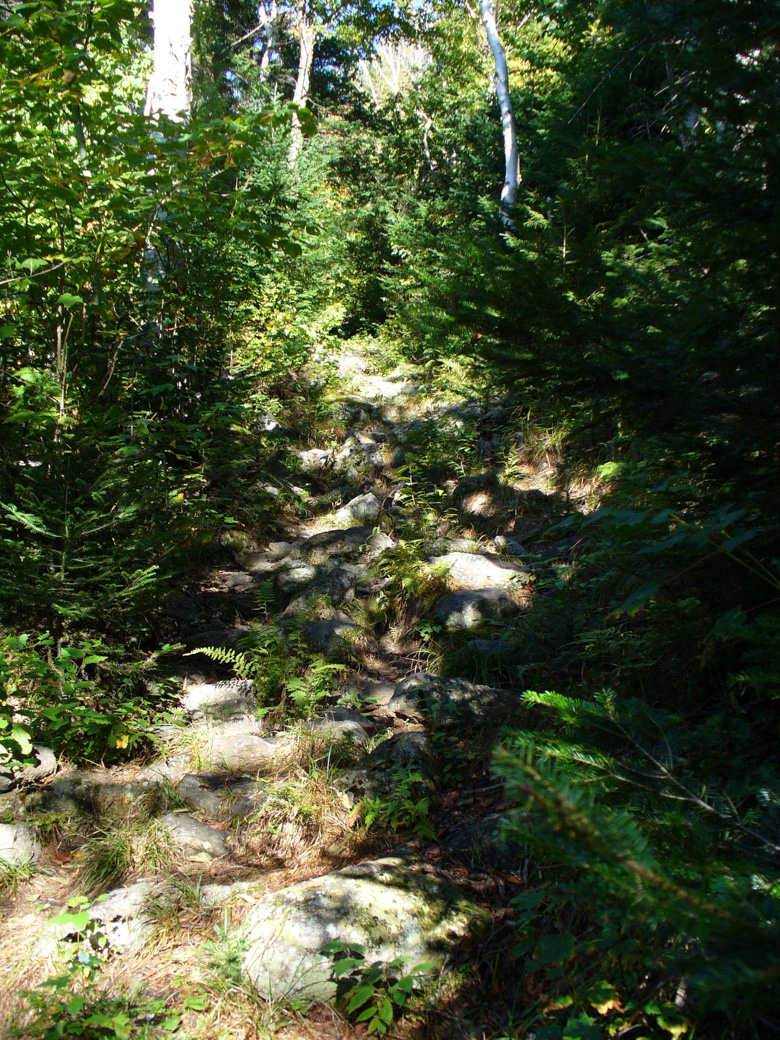 At the campsite, Red the camp red squirrel, and Chippy the local chipmunk tried to entertain us. They actually weren't very pesty, despite obviously being used to people.