continued from page 1 of our November 2012 trip to Bar Harbor & Acadia National Park:

We spent a lot of time in Acadia National Park.  This is the 'sweet spot' where the park stops charging admission but is still open.  At least, as our B&B hosts warned us, open until any inclement weather.  They close down at the first sign of snow.  Since there was some forecasted for later in the week, we made certain to spend some quality time in the park early in the week.

The last time we were here was in the summer, and in Otter Cove were a number of lobster pot buoys.  That was not the case now, at the end of November.  The water was uninterrupted blue, from Otter Point to the bridge at the end of Otter Cove. 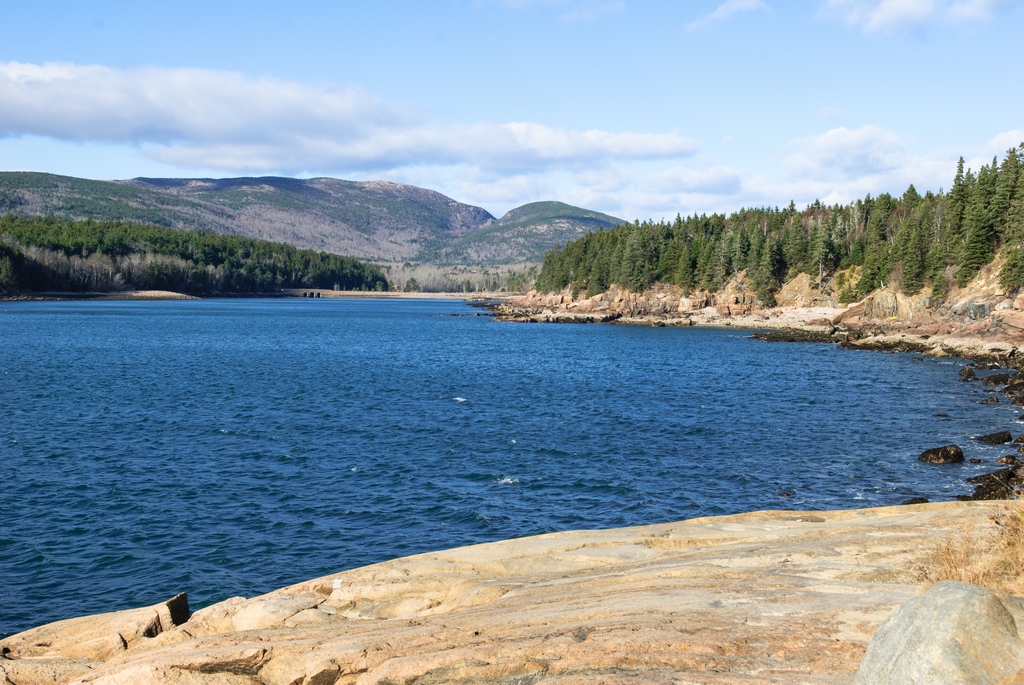 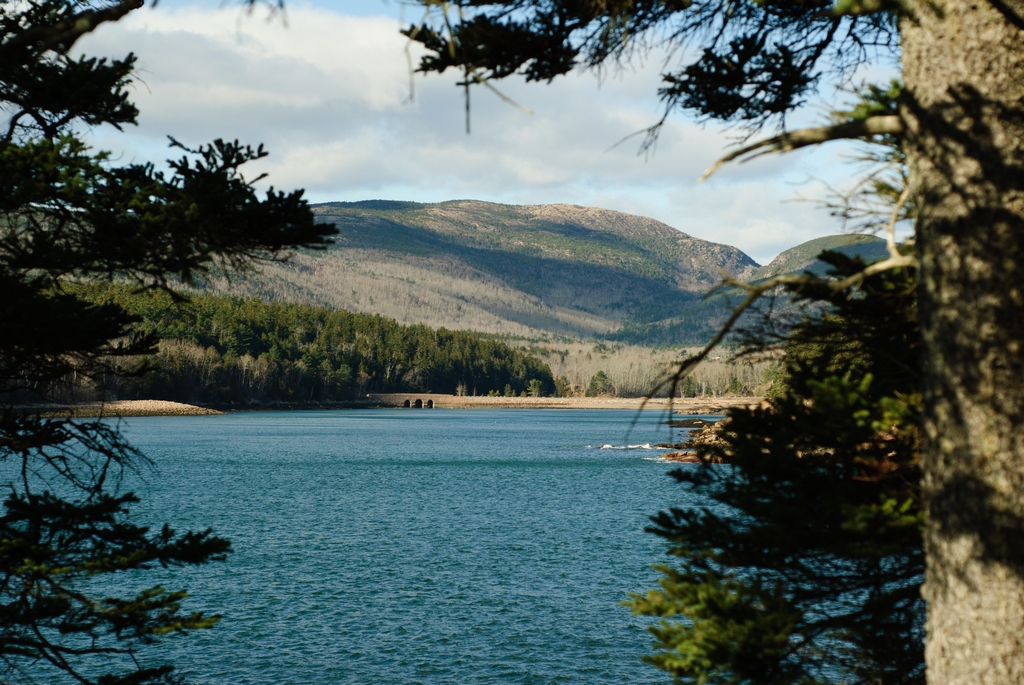 Otter Point has the typical rocky shoreline of this area. 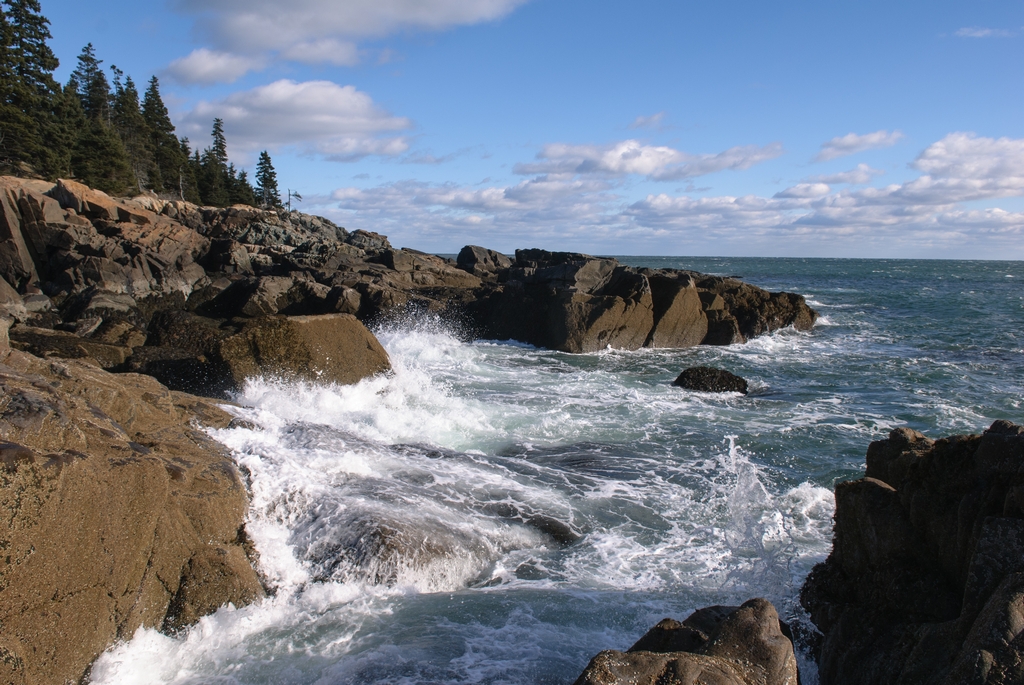 The cove actually ends with just a little strip of land (where the road goes), and there is another feeder area on the other side of that strip. 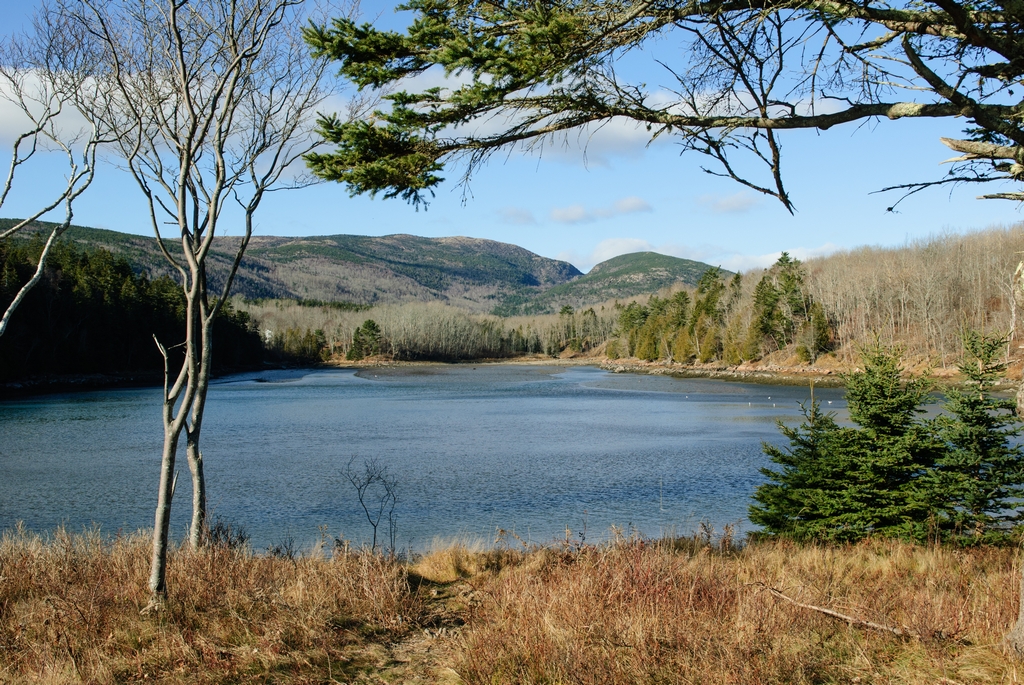 The park road primarily has one-way travel.  Down the road from Otter Cove is Little Hunters Beach.  Paul is fond of this rocky little cove, since he went SCUBA diving there once many years ago. There is a staircase down from the road to the beach; under the road is an open culvert to allow water to flow out to the ocean. 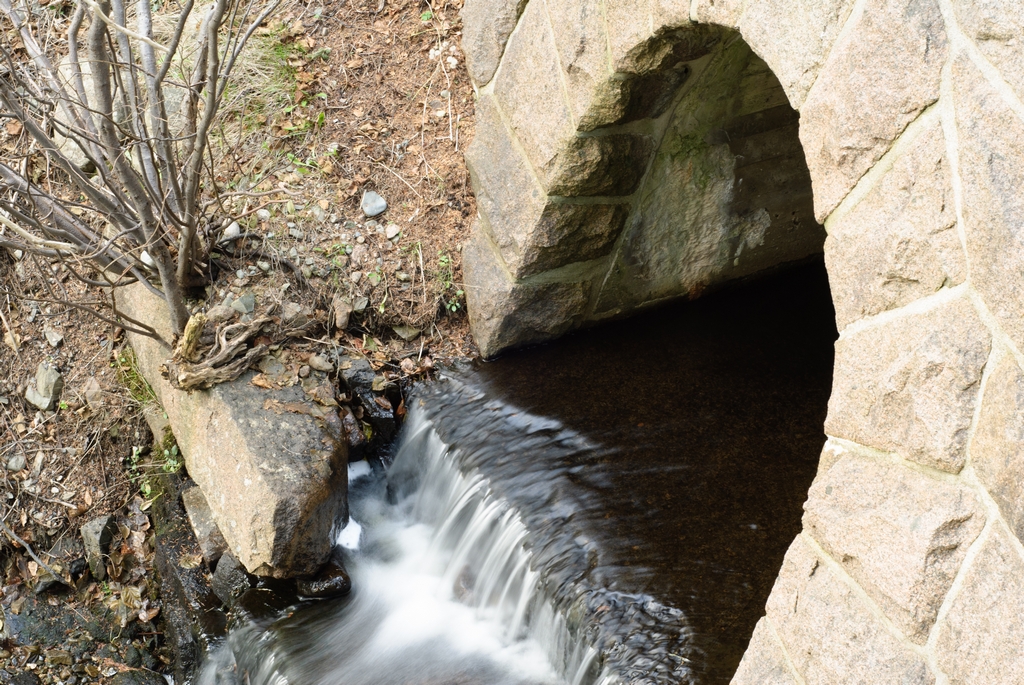 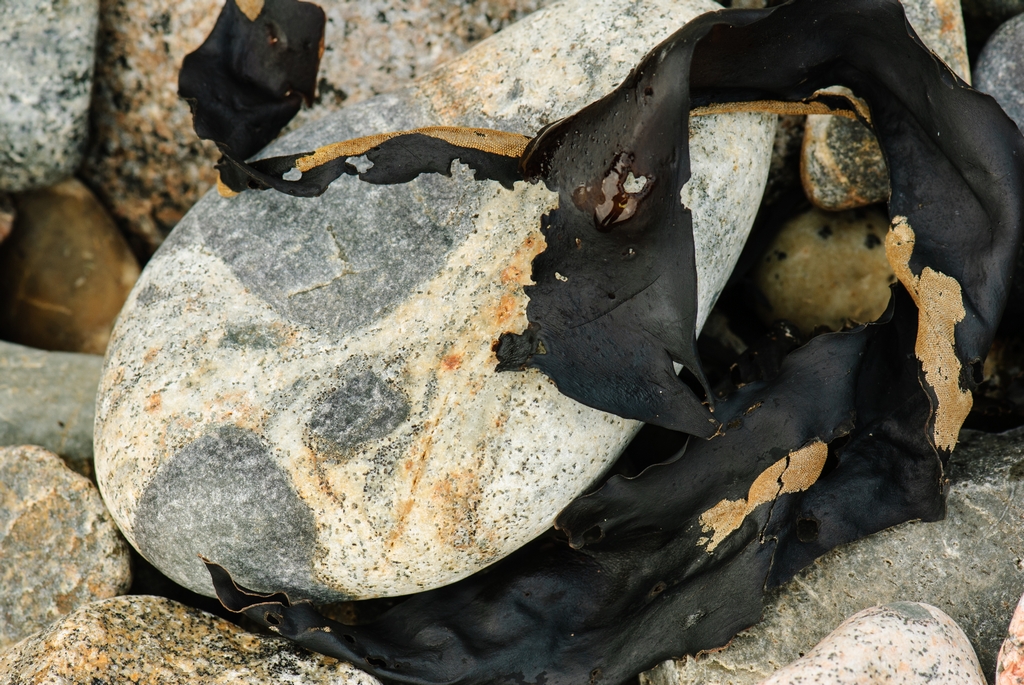 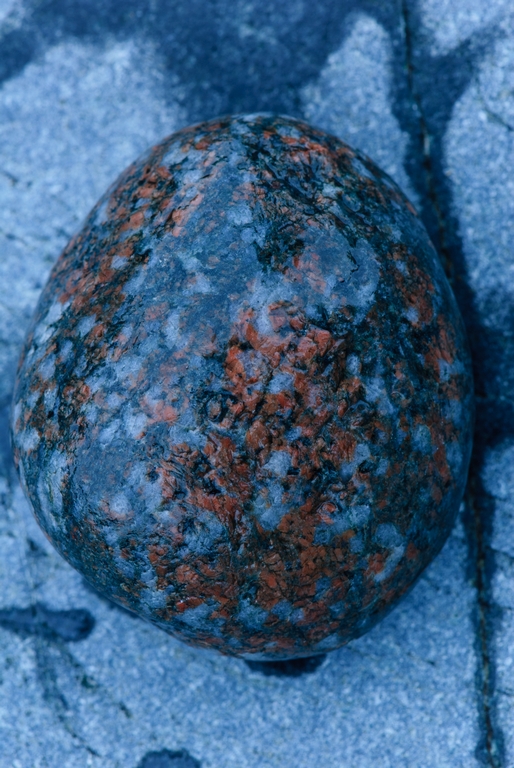 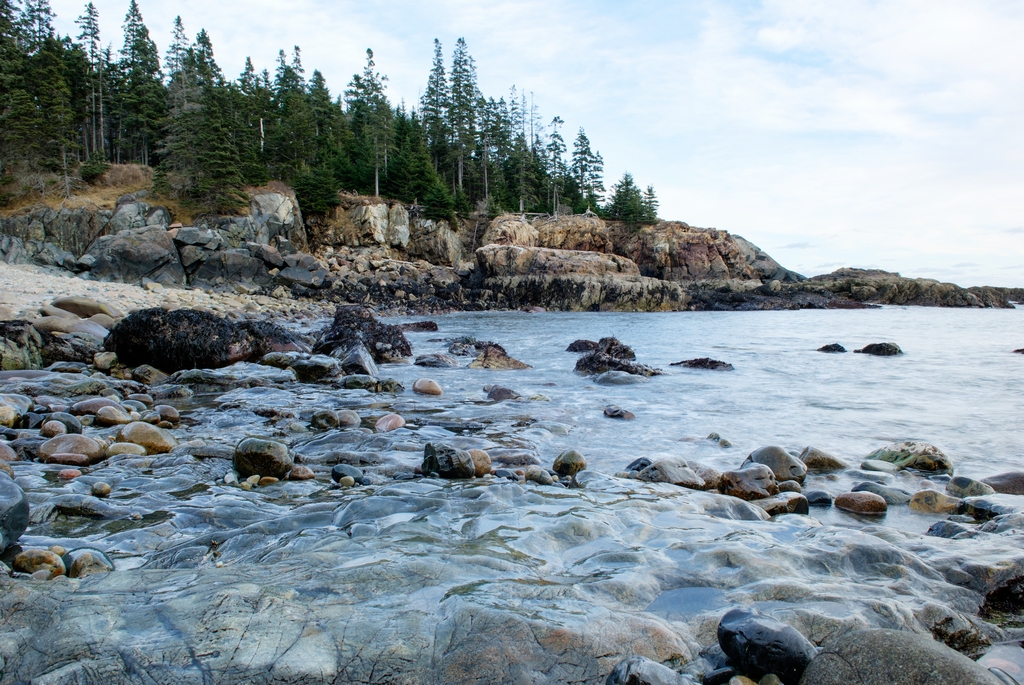 The tide flowing over the rocks provided a great opportunity for Paul to work with long exposure photography.  This can give the water a beautiful, transparent look. 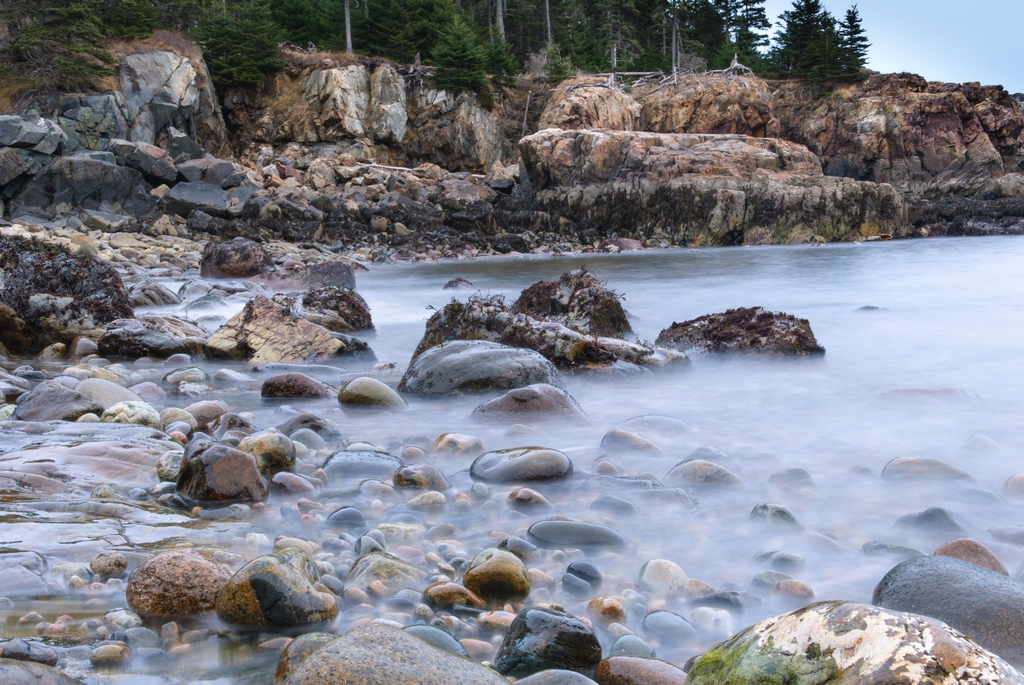 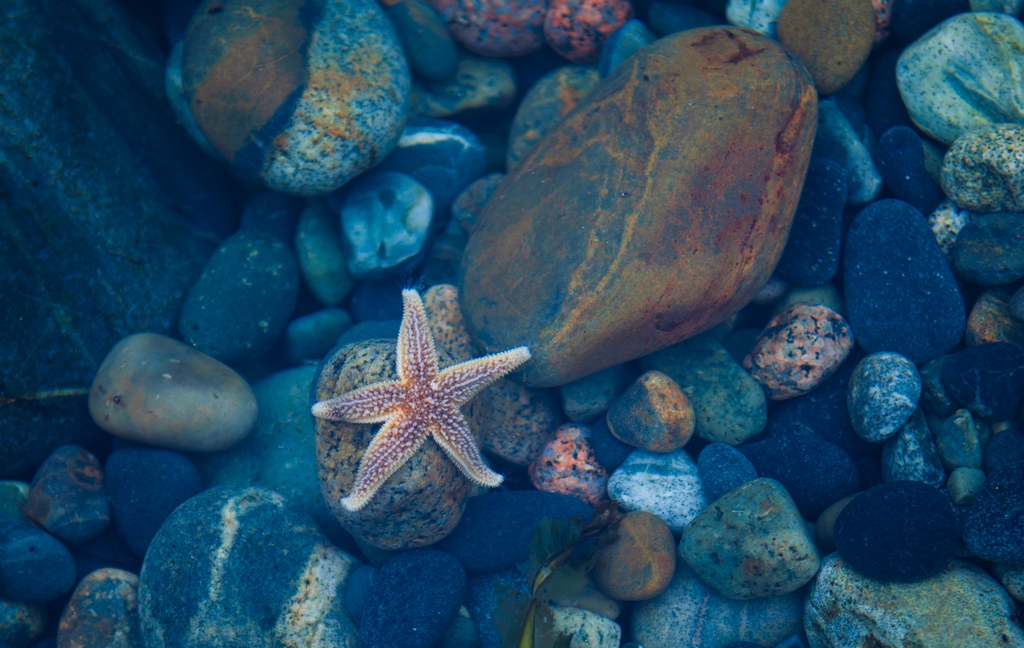 There are some beautifully colored rocks in the park.  The cliffs on both sides of Hunter Cove is one of the spots with a lot of color.  We of course took some pictures of these. 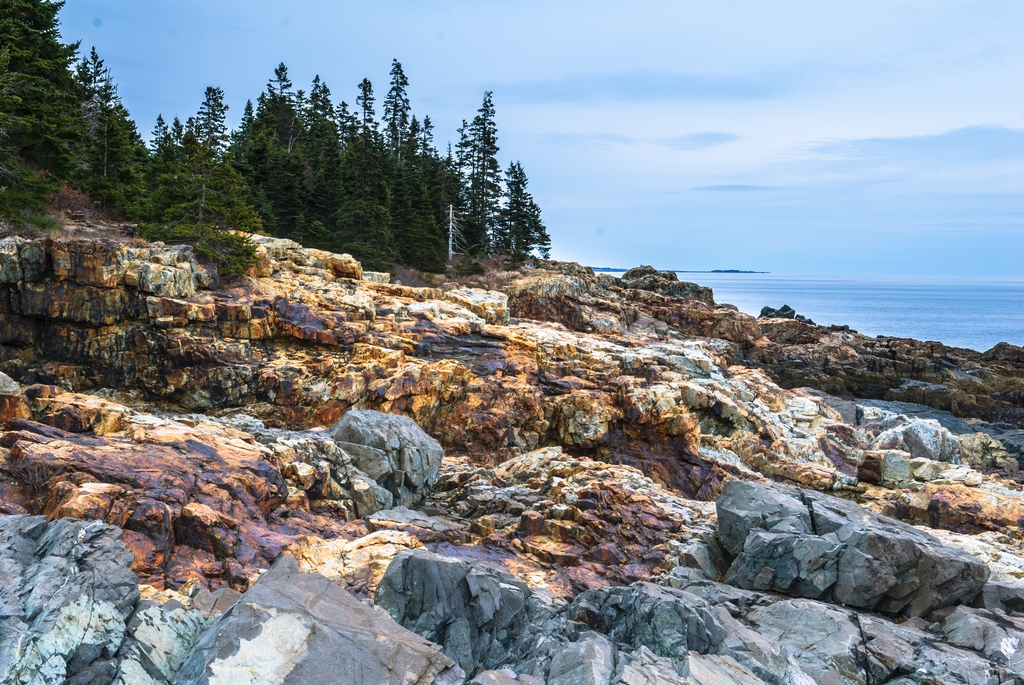 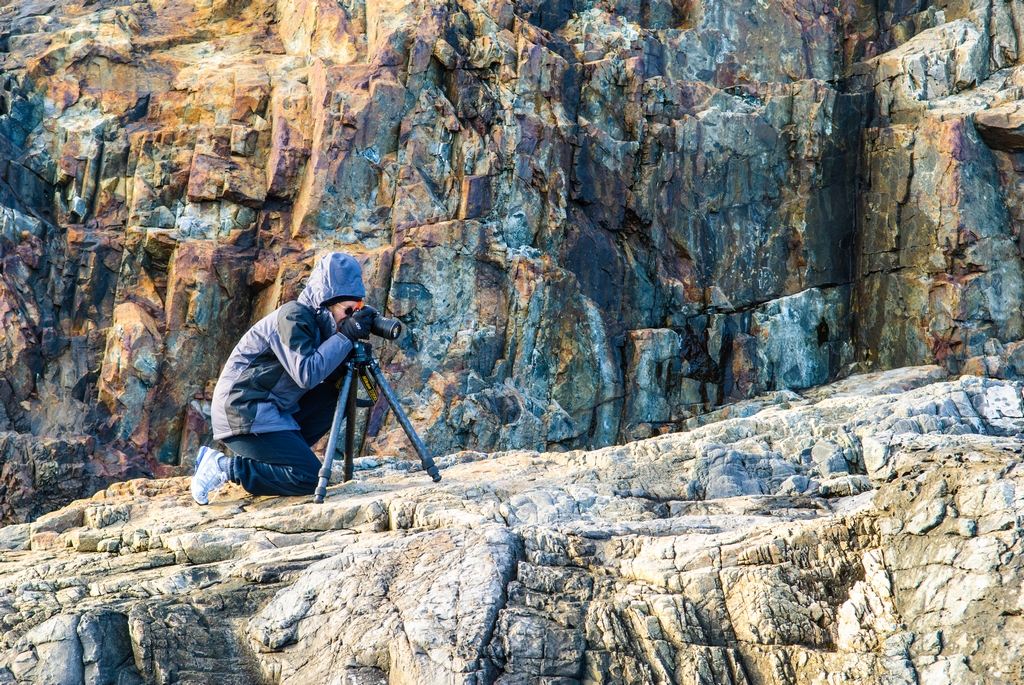 We really enjoyed Hunter Beach, and stayed there one day to see the sunset.  (The houses you see are outside the park, on what is called Ingraham Point.) 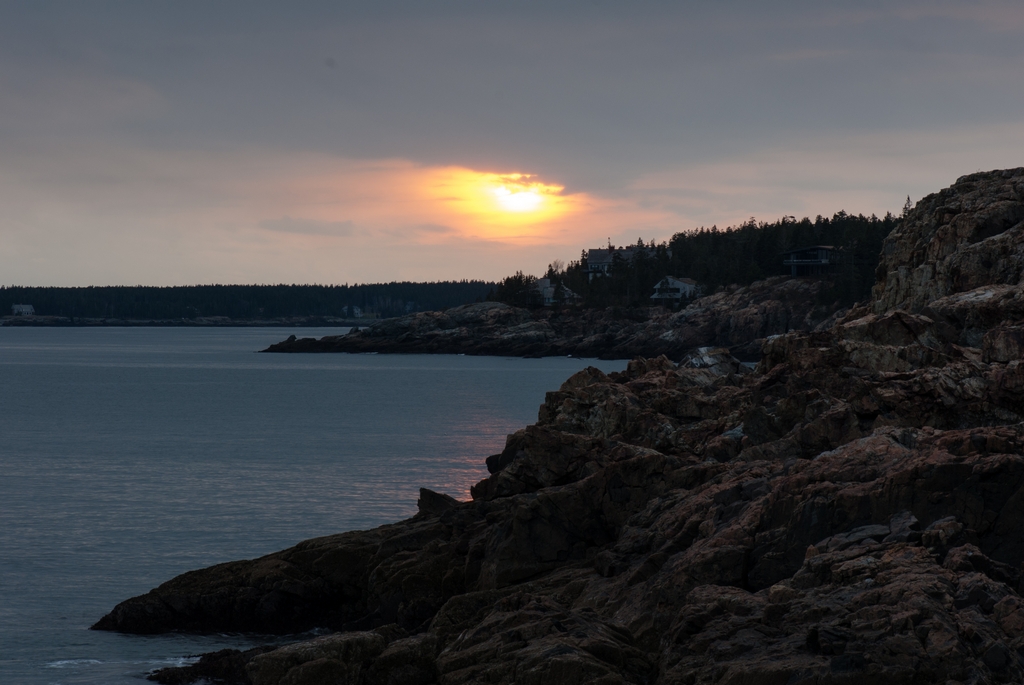 The following day had snow forecasted, and we were expecting that the park would be closed from that point on.  So it was nice to take full advantage of this section of the park being open.  There was another couple (from Chicago) who stayed at Hunter Beach until sunset with us.  We drove up to the exit ... and the gate was closed.  The other couple were in their car in the entrance of a road that said 'not a thru way'.  We both decided that we must have to continue up the road, which would bring us to Jordan Pond House. Well, the gate was closed there as well.  So we drove back (this section is one of the few two-way sections of road) and stared at the closed gate.  Unfortunately, cell phone reception is very intermittent in the hills on the island, and there was no service here, so we could not call from here.  So we & the other car drove the WRONG WAY down the Acadia National Park road, past Hunter Beach, past Seal Cove, around Otter Point...

(These pictures were, of course, taken at a different time since it was dark out by this point.  But we walked some of the way later in the week.) 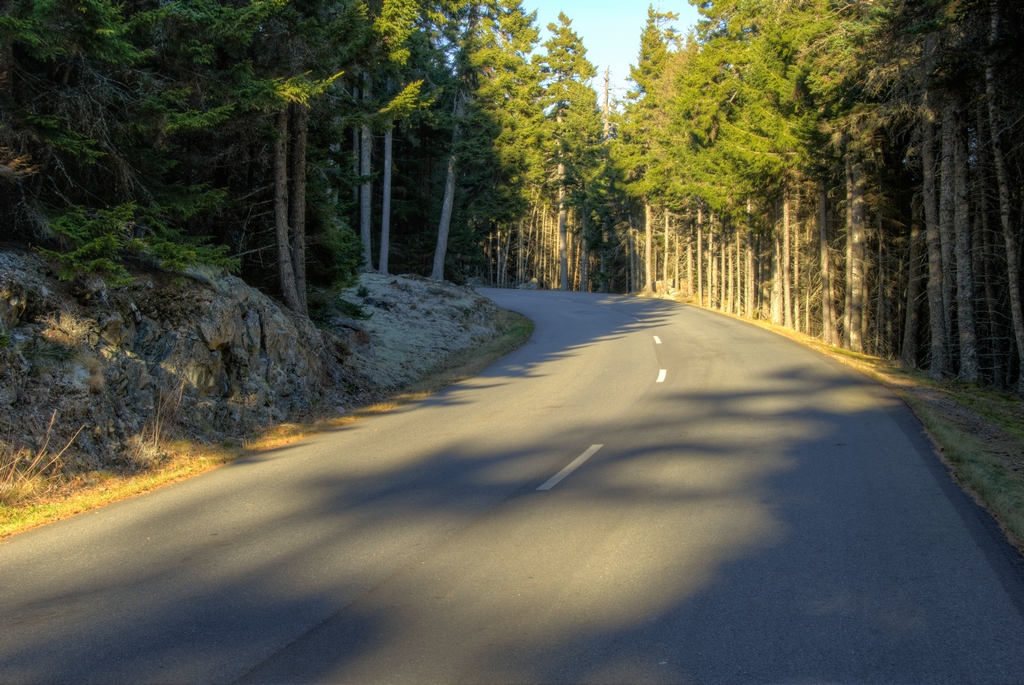 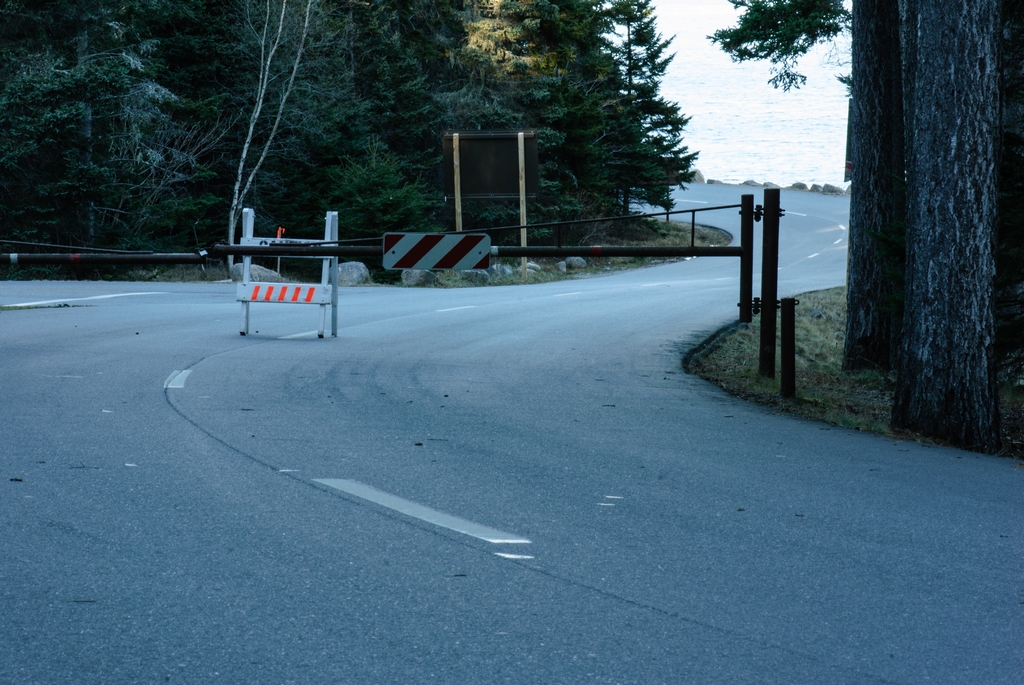 to a closed gate just before we could reach another exit.

But at least we had cell phone service here.  I called our inn keeper, who told us that the road that said 'not a thru way' was lying to us.  It was actually a thru way.  I told the other couple (who were calling 911, but I got an answer before they did).  Paul actually had to drive the truck in reverse, in the dark, about a half a mile in order to get to a spot where he could turn around.  The park was closed the rest of the week, but now we knew the 'secret' entrances to the park for off season.  So we continued to go in to those sections of the park the rest of the week.  We asked Roger (our inn keeper) how often this happened to their guests.  He told us that this was the 1st time in 17 years that it had happened!

The back entrance to the park had a nice scene with a pond reflecting one of the park mountains.  And one time at the exit, a couple of deer were calmly eating.  There is no hunting in the park, so they didn't mind us being there. 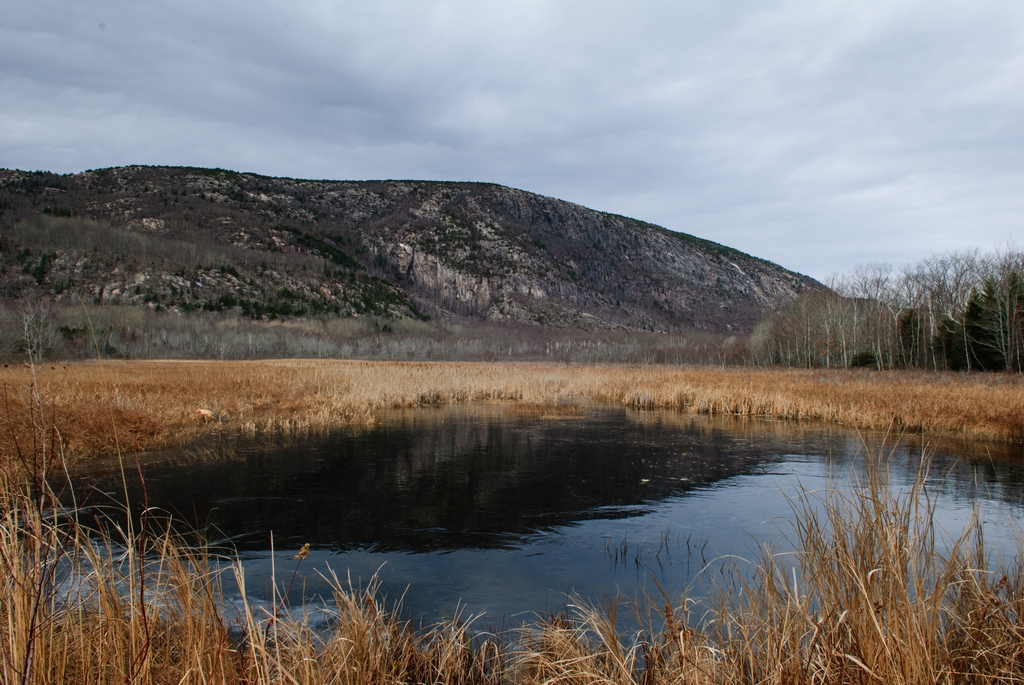 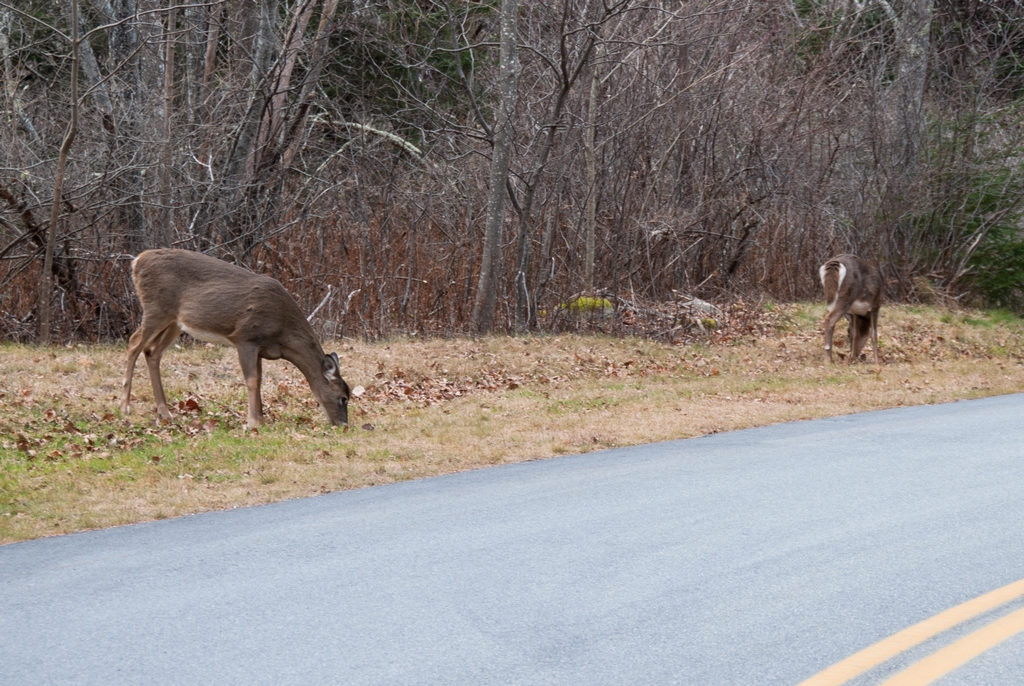 Outside of the fake non-thru way is Seal Harbor.  You might think that Bar Harbor is expensive, but it is obvious that the really expensive houses are in Seal Harbor, if you take a short drive off the main road.  The harbor itself has a very nice dock, and we were able to catch a pretty sunset there one evening. 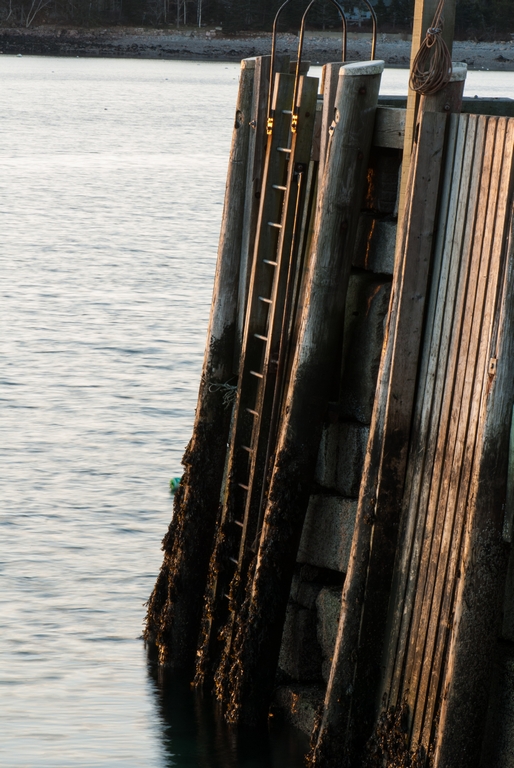 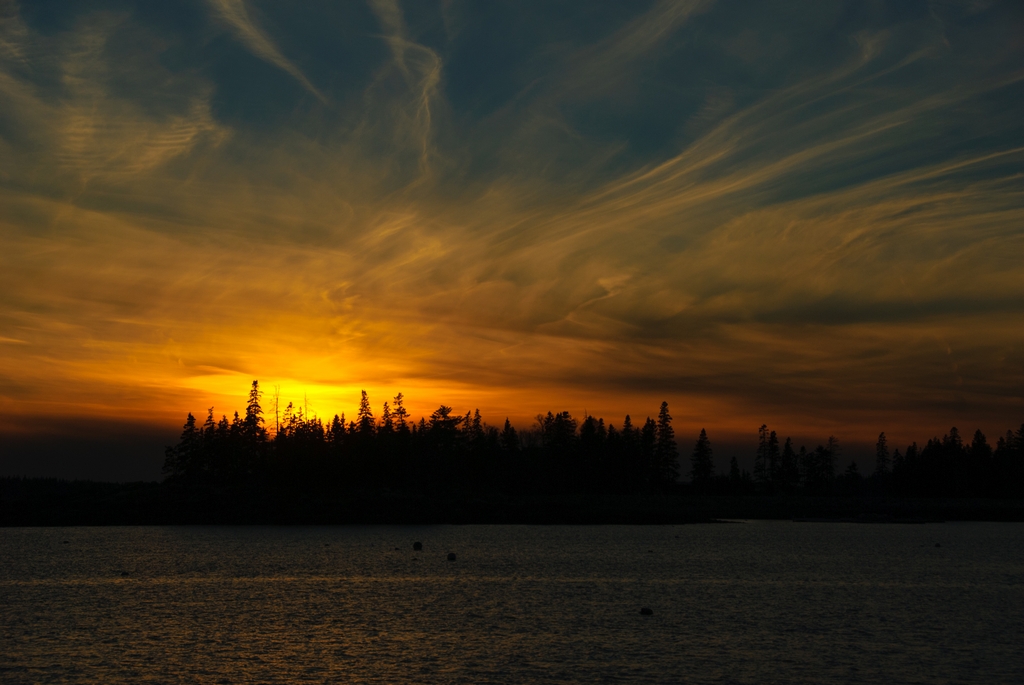 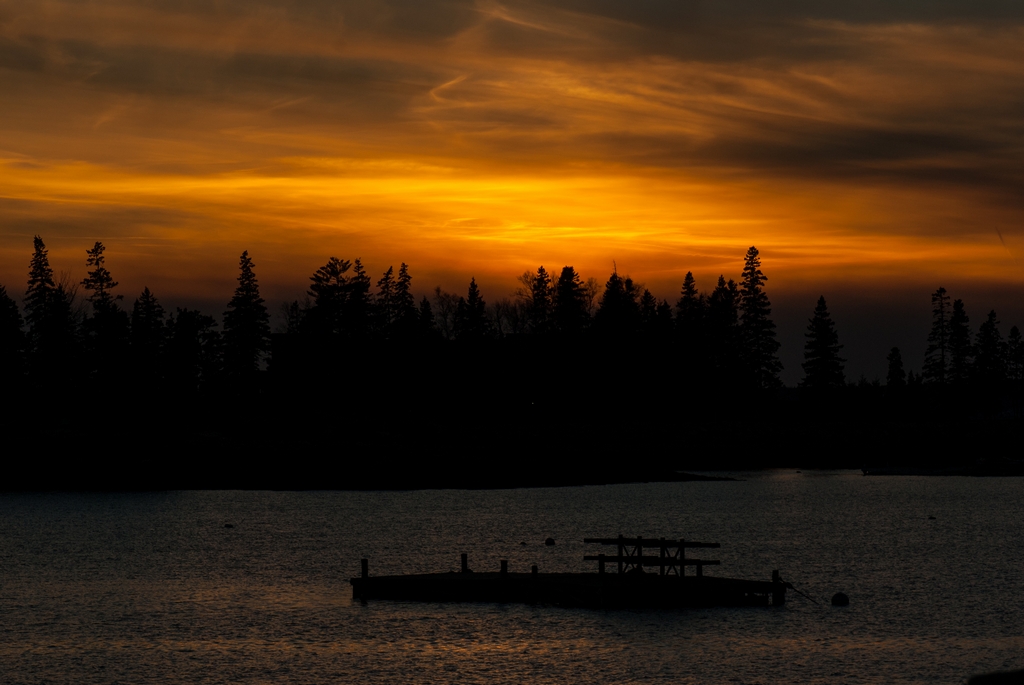 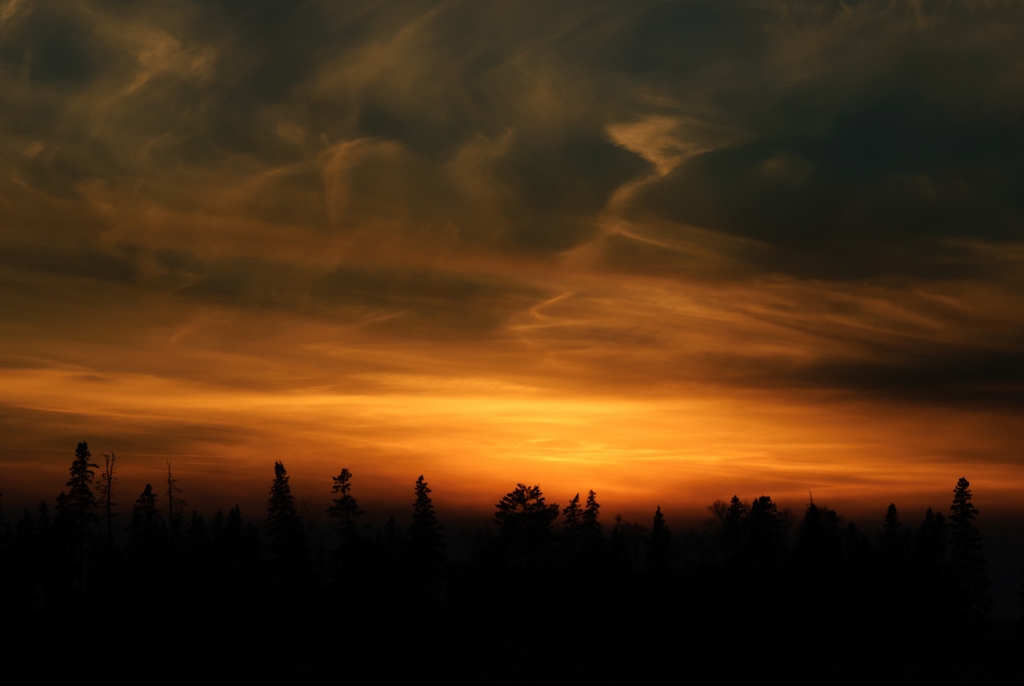