In Newport RI, there is a polo club. Newport Polo Club at Glenn Farms

We went to a match a couple of years ago with our friends Wendy and Brian, and decided it was past time to go again. They have been going most every weekend. (The matches are on Saturday evenings, starting at 5 PM.) So I made some hummus and tabouli for our meal, and off we went.

Many people gather around the edges of the field to watch the game; you can see them in some of these pictures. We sat in the small bleachers, which affords a good view of the game.

Here is a link to the rules: US Polo Rules Page

A brief summary, basically as provided by Brian: Two teams of 4 riders each. Two refs. The players have mallets, and try to hit the ball between the goal posts. After each score, the teams change sides. Cutting into the riding line of the last player to hit the ball is not allowed. Much else is allowed, though, such as riding next to and pushing another horse, or using your mallet to hook the other players mallet. Talking back to the ref is not tolerated, though, as we saw during this game. There are 6 periods, or chukkas, of 7 minutes each. Horses are changed each chukka. (So you need a minimum of 2 horses to be able to play the game; more is better - it is exhausting for the horses.)

They practice a bit before the game starts. 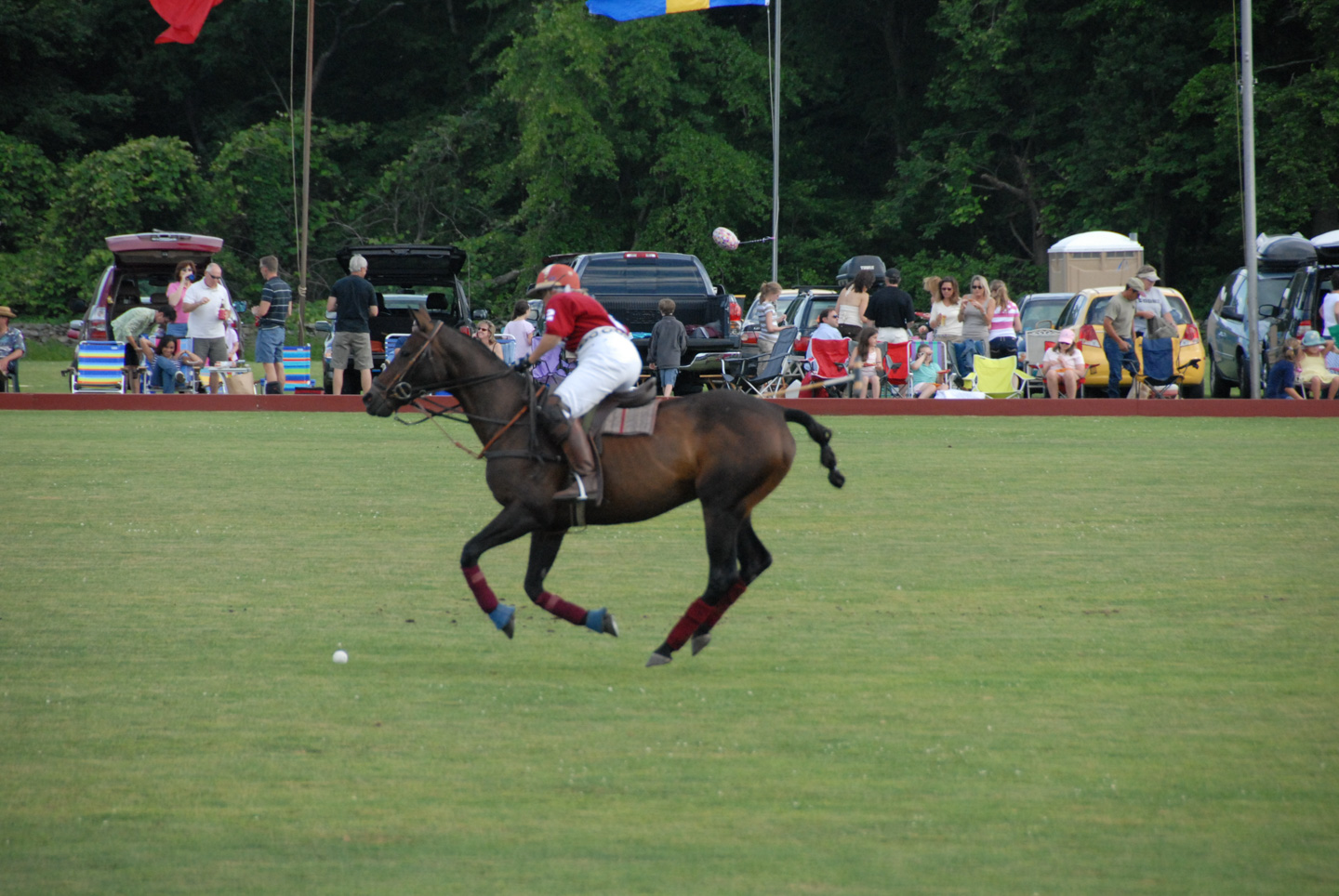 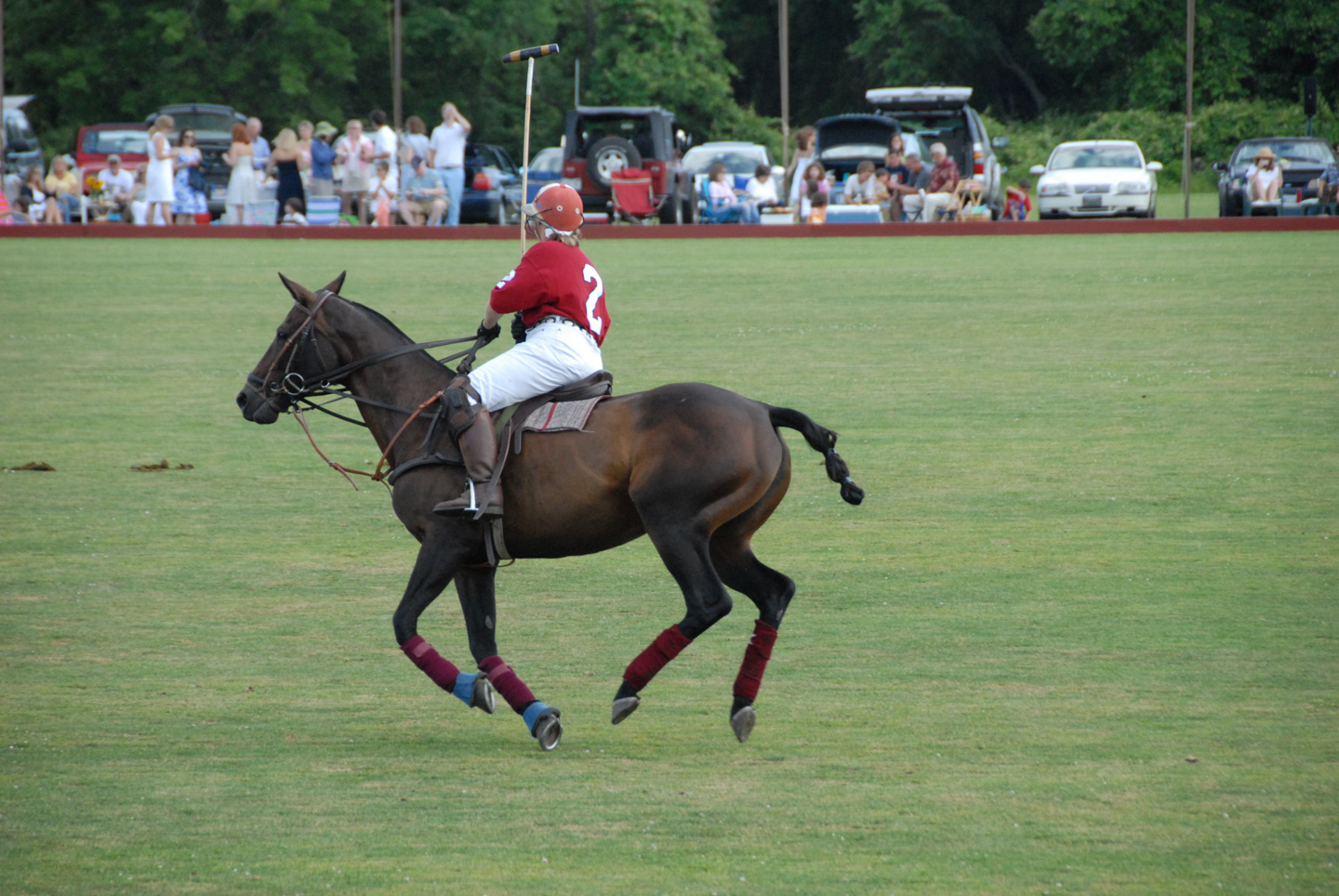 We saw a local match, with the Black team and the Red team. 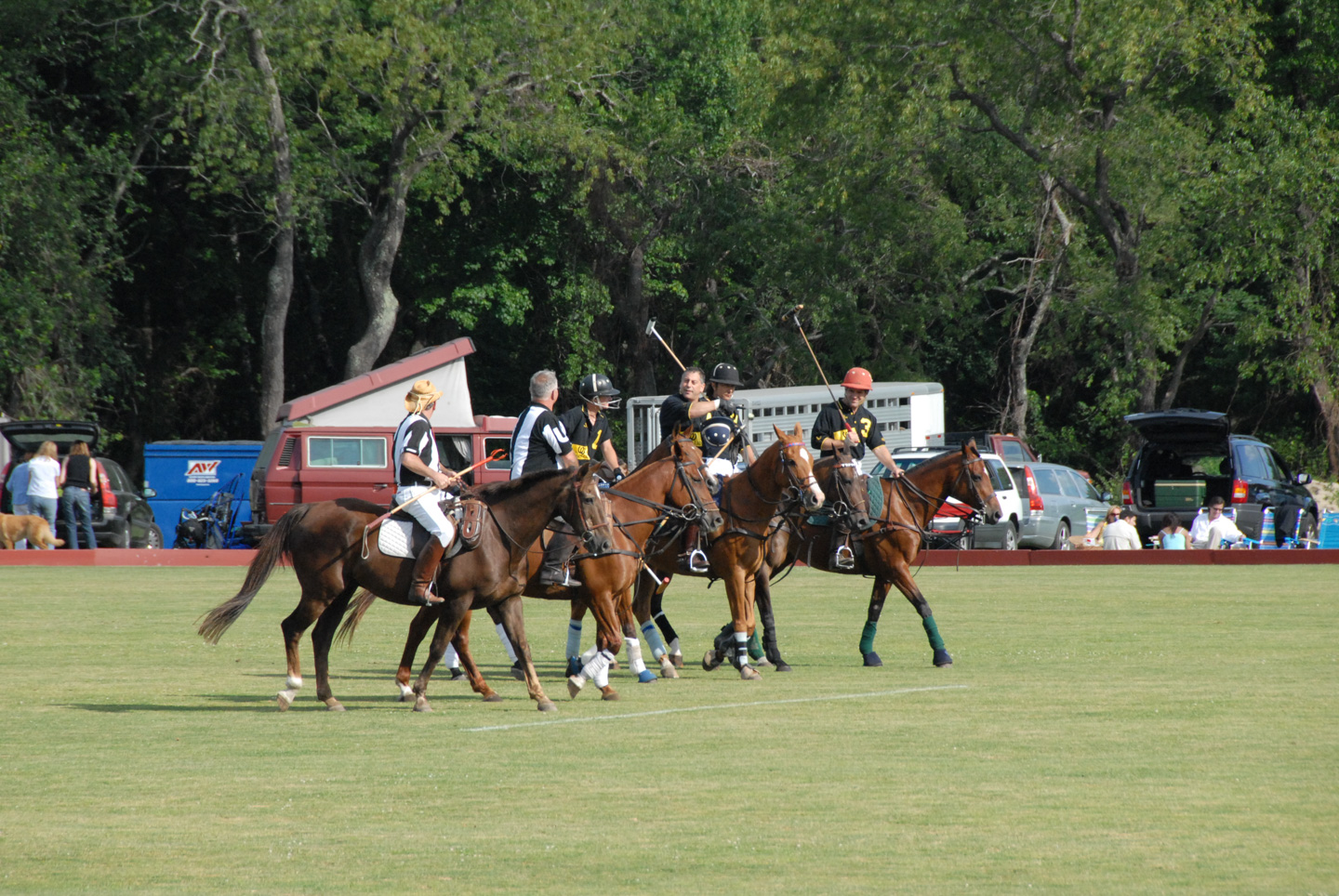 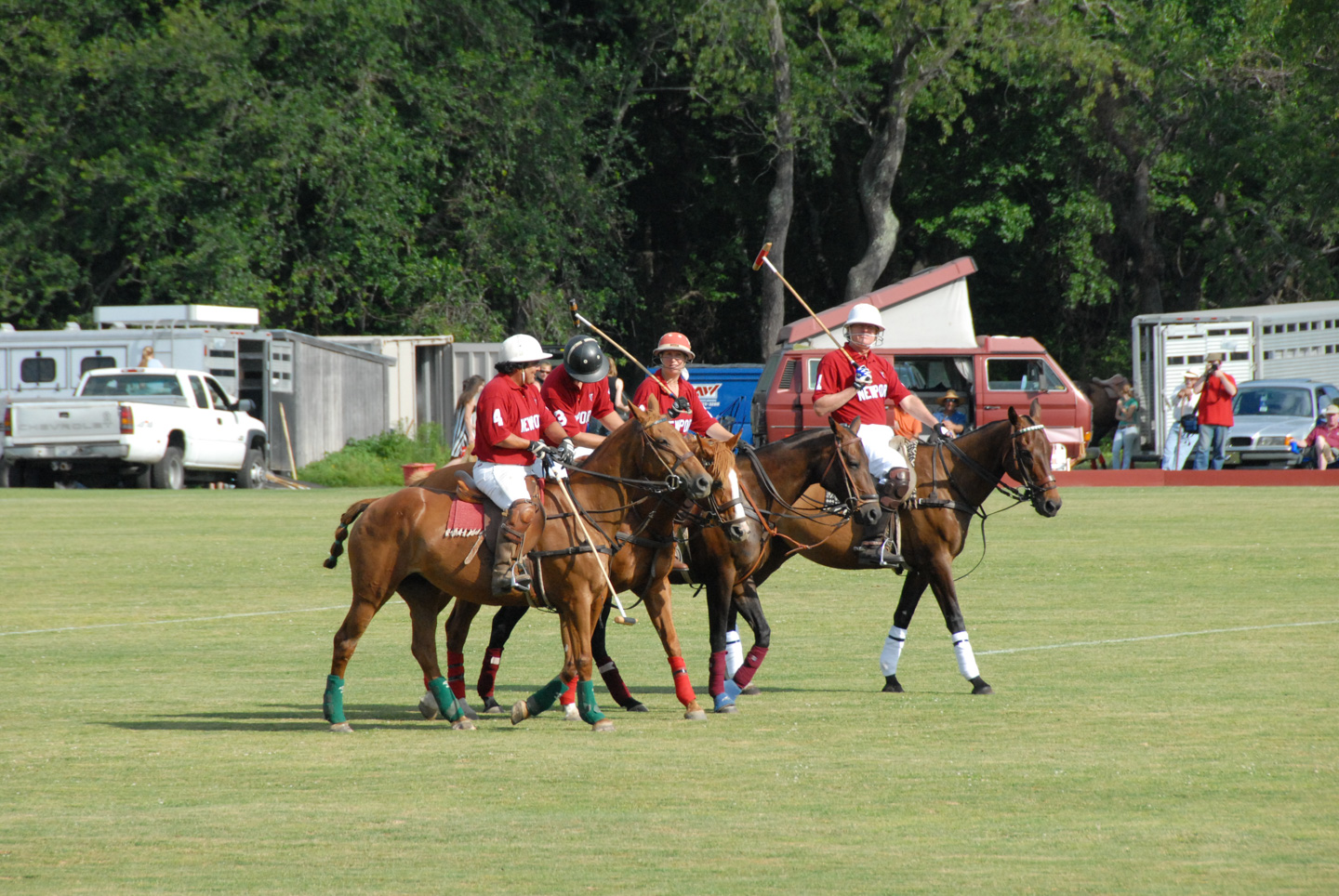 During the national anthem, many of the players stood in their stirrups. 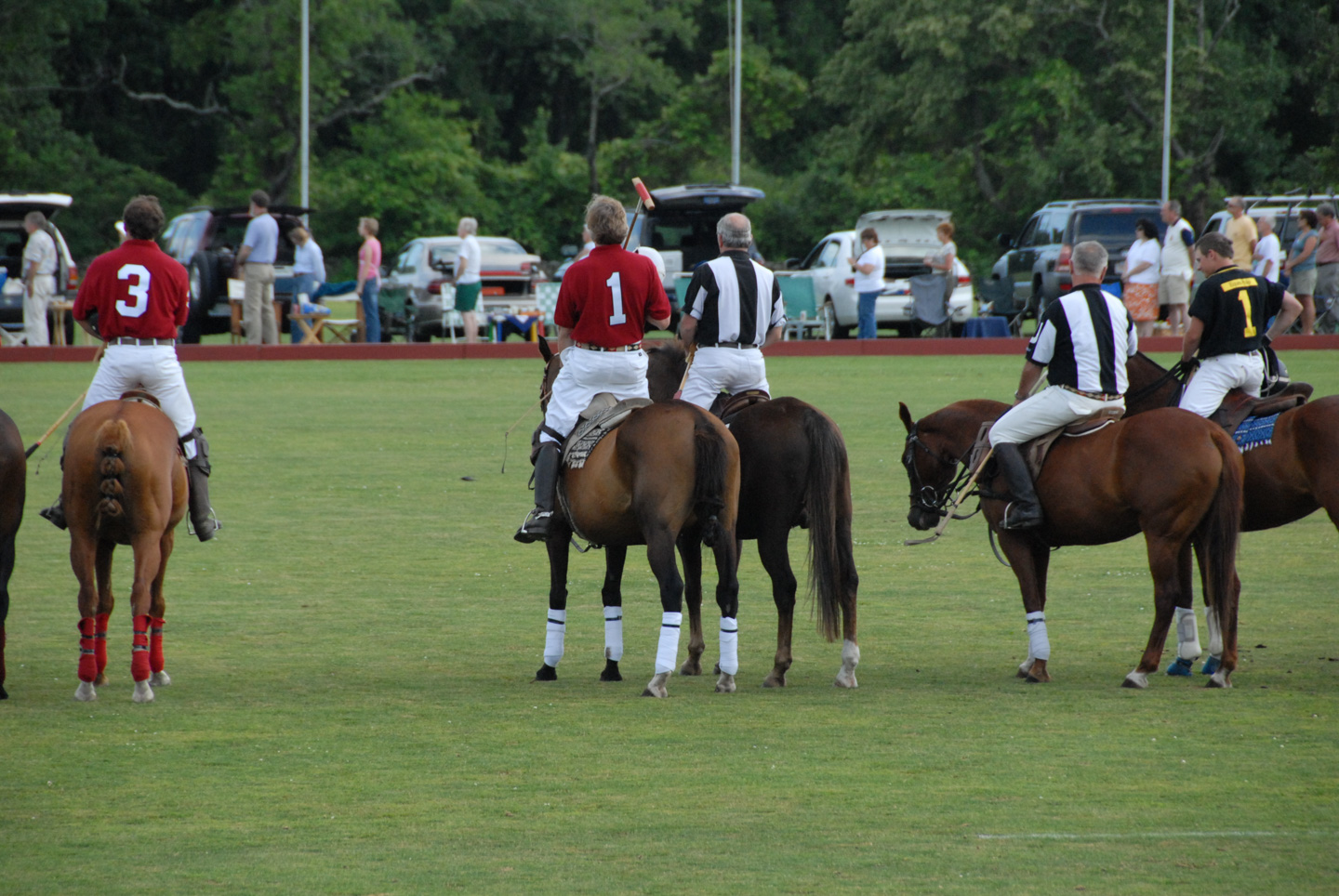 Then the game begins! Looking over his shoulder to watch where the ball moved - see how straight out the horse is: 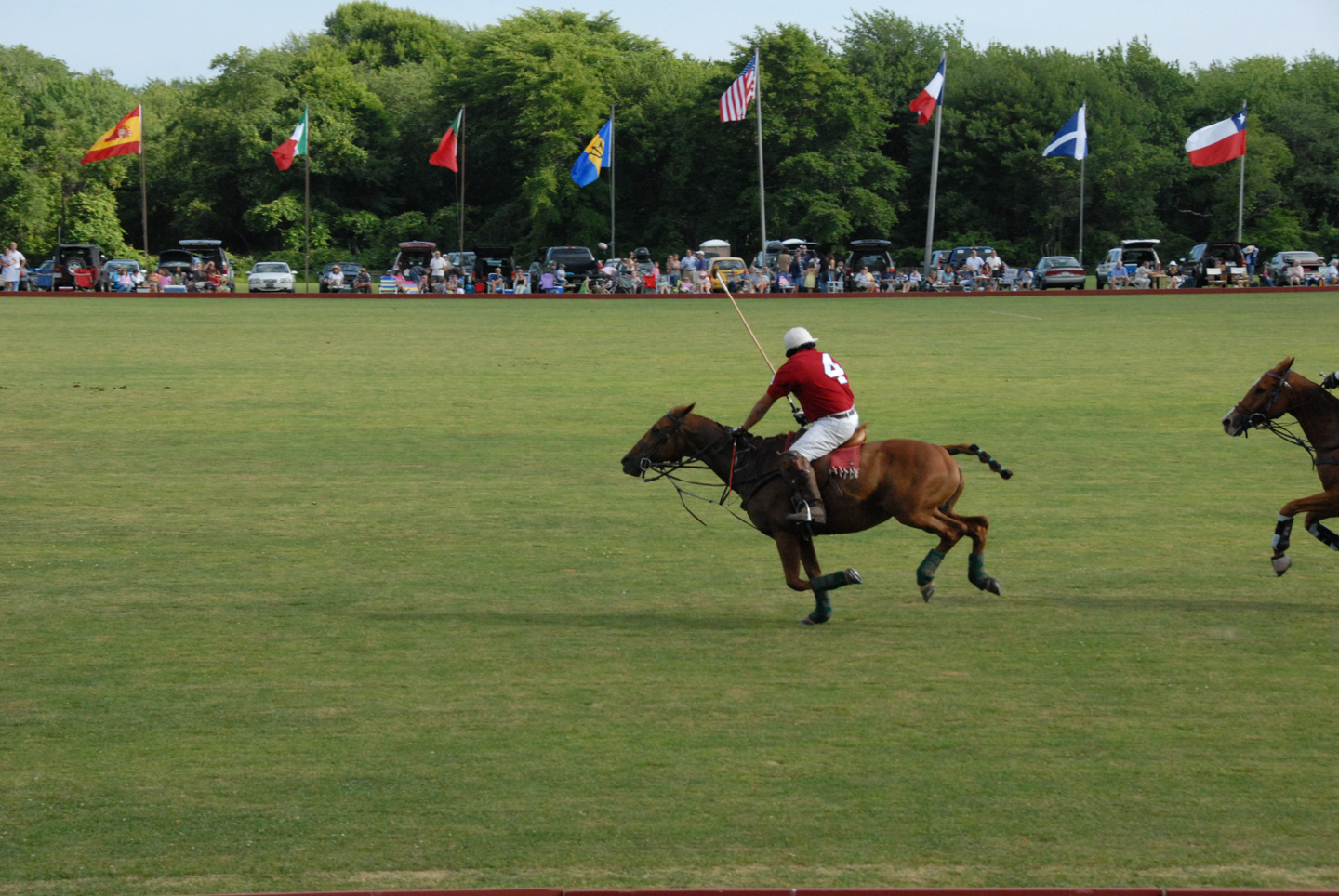 Following the ball down field: (#3 is Dan Keating, the founder of the Newport Polo Club; his horse is completely off the ground in this picture) 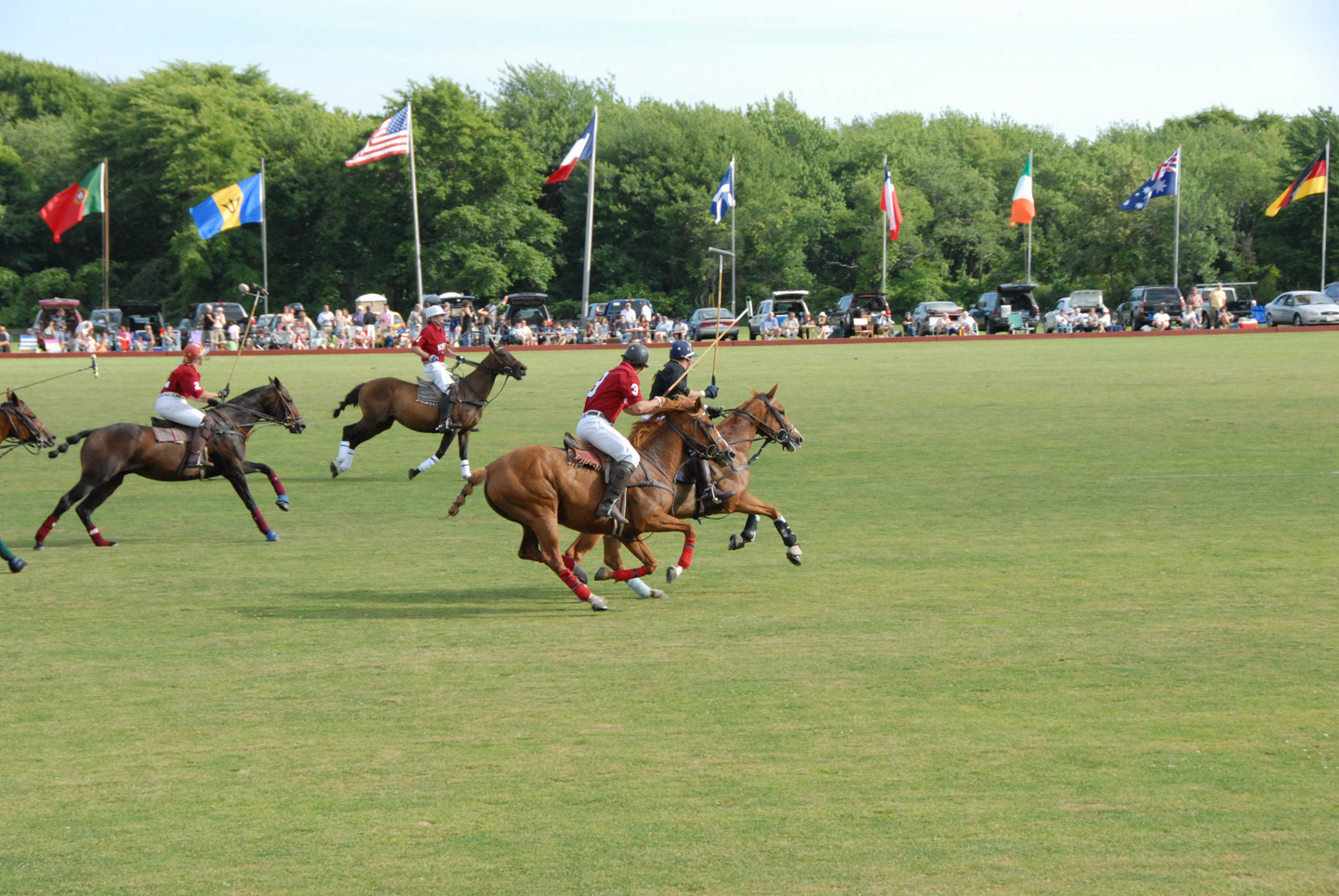 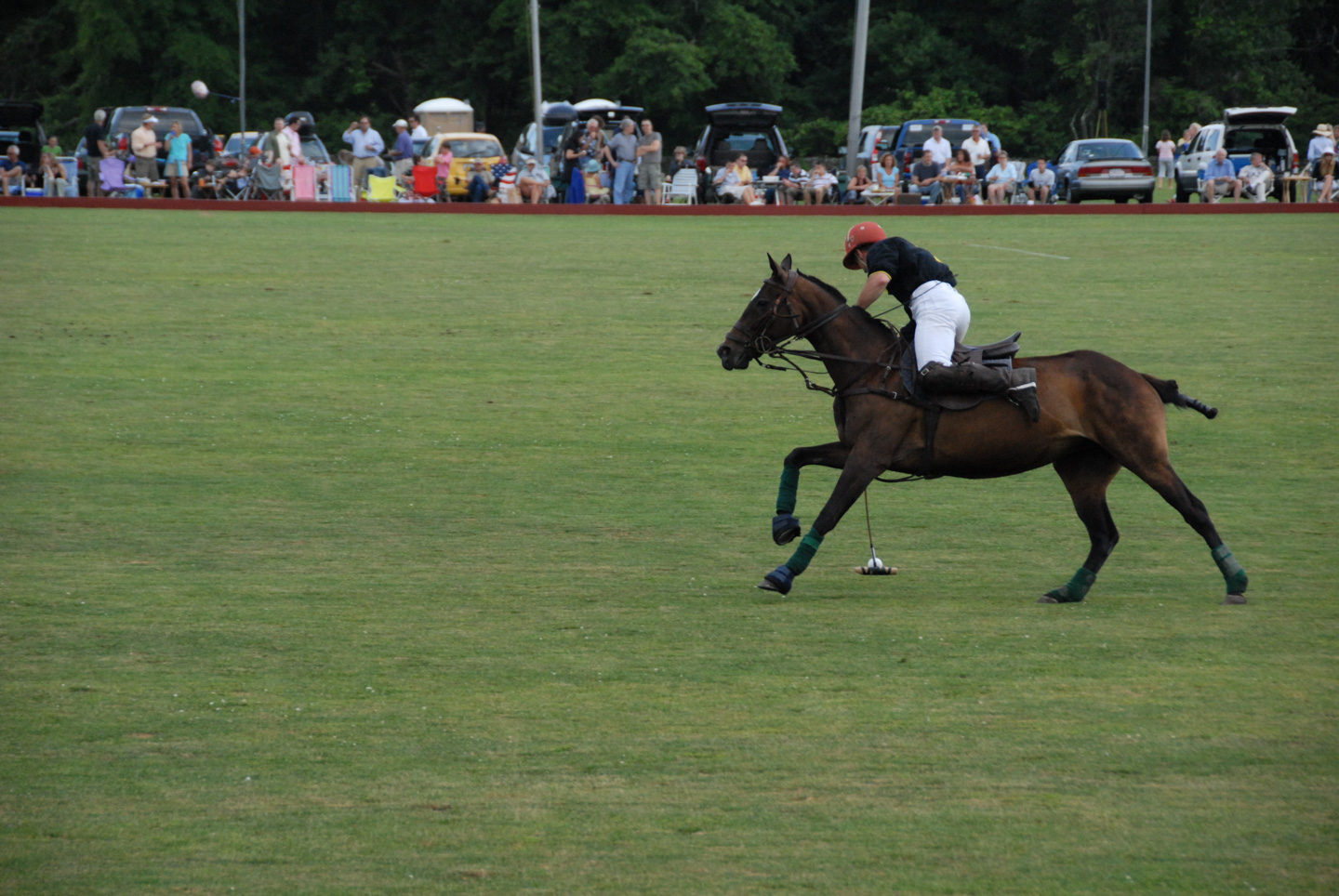 And another player 'flying' after the ball he hit (another example of a horse completely in the air): 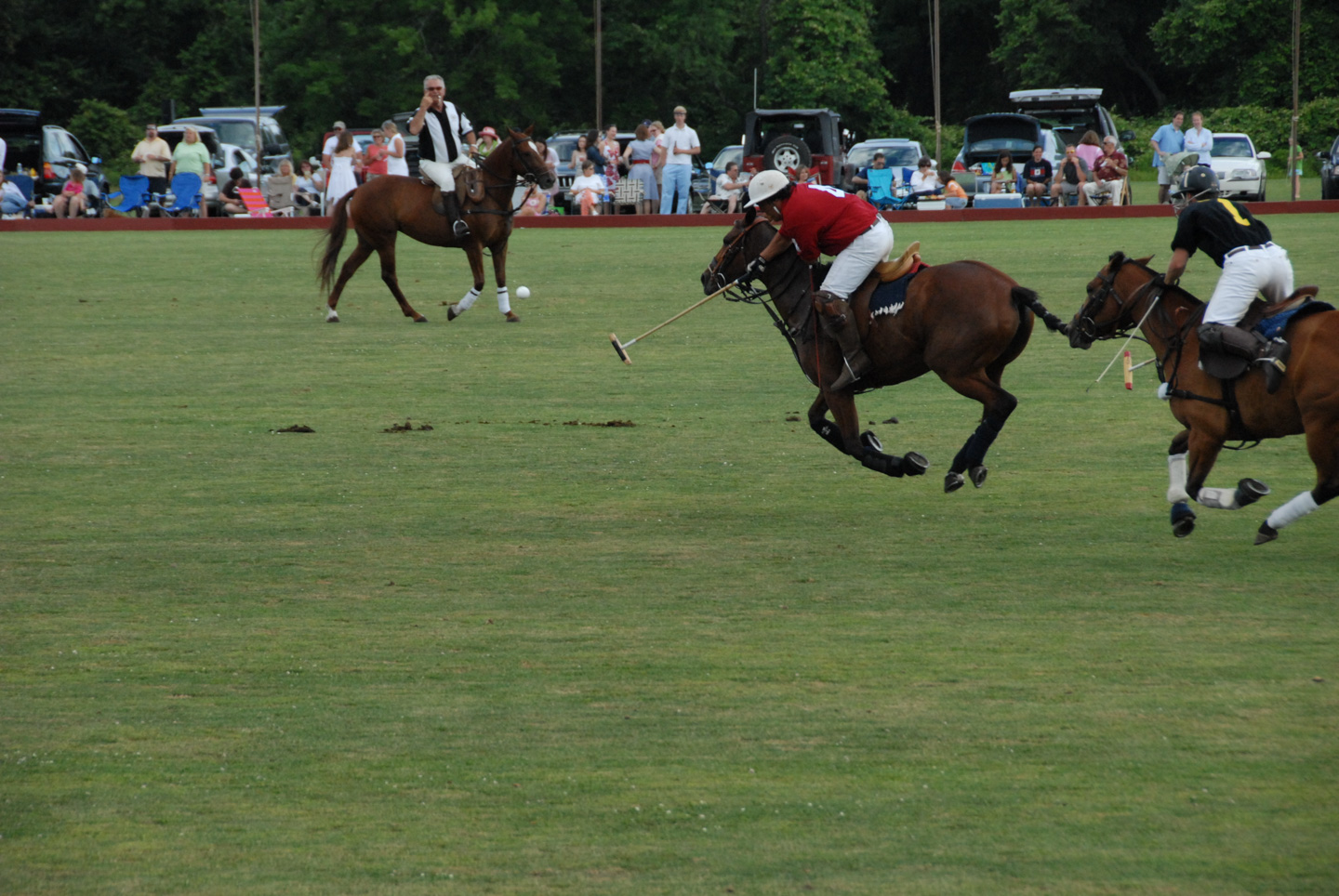 The ref watching the action: 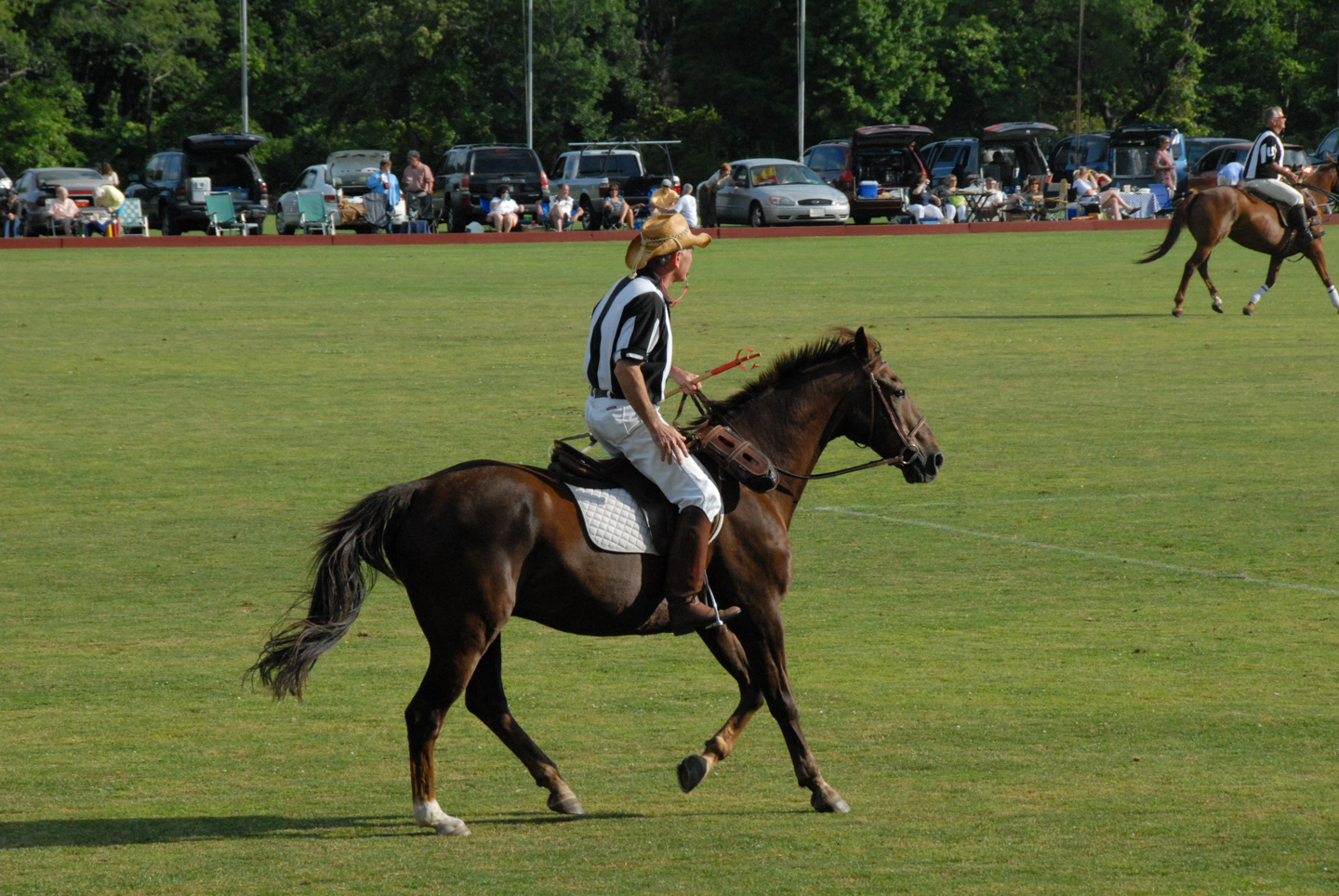 These next pictures show the action a bit: hitting the ball & then following it to send it further towards the goal. 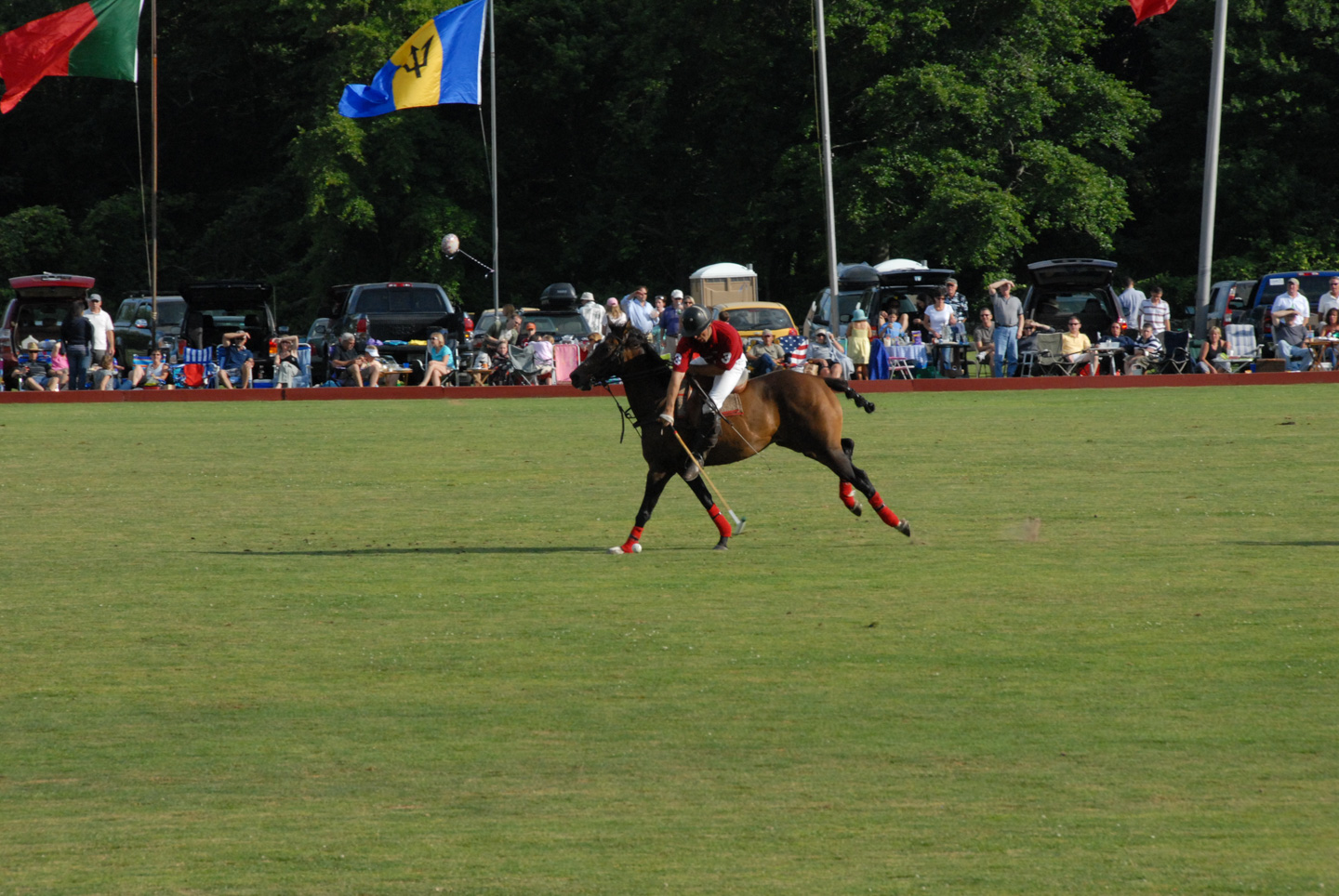 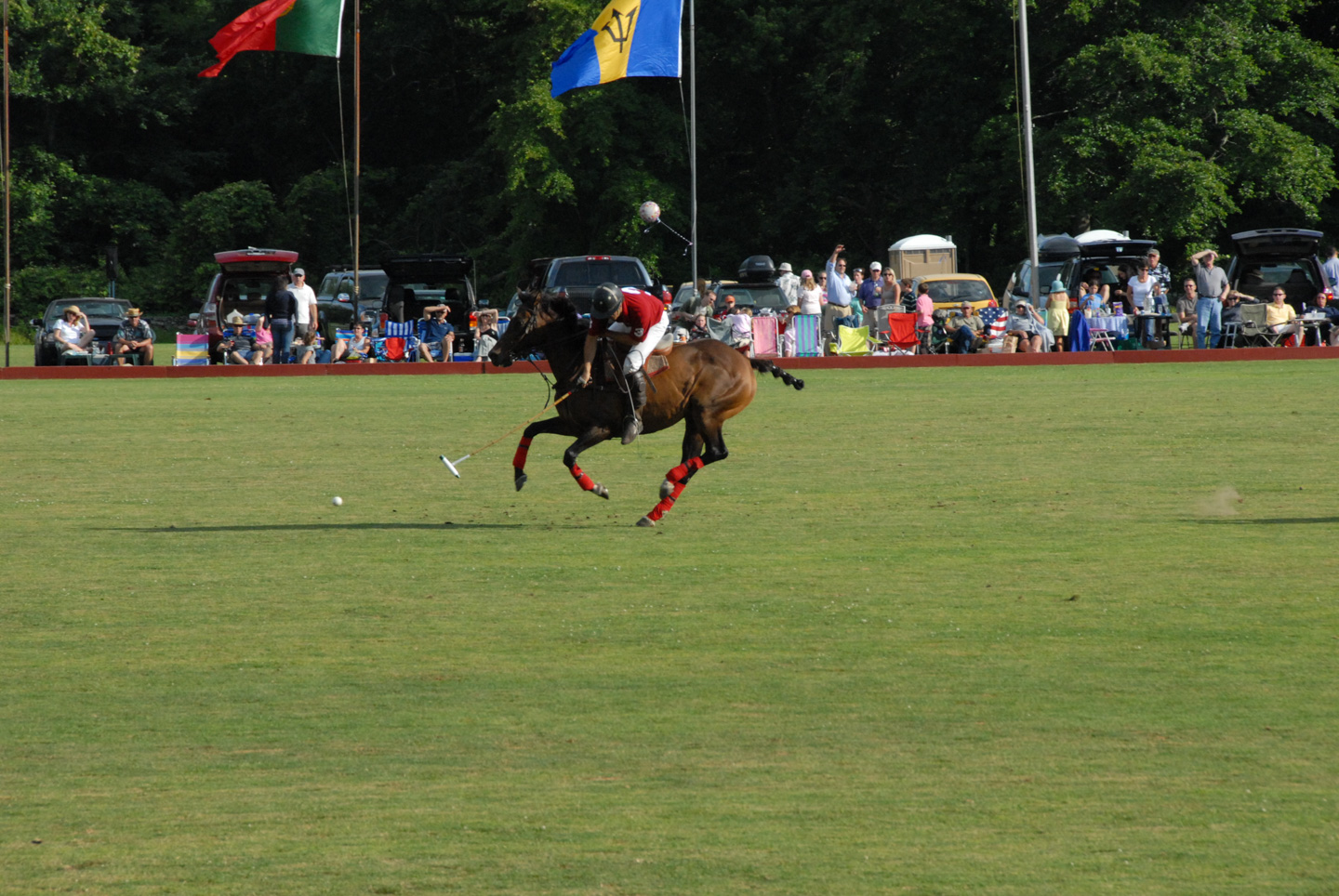 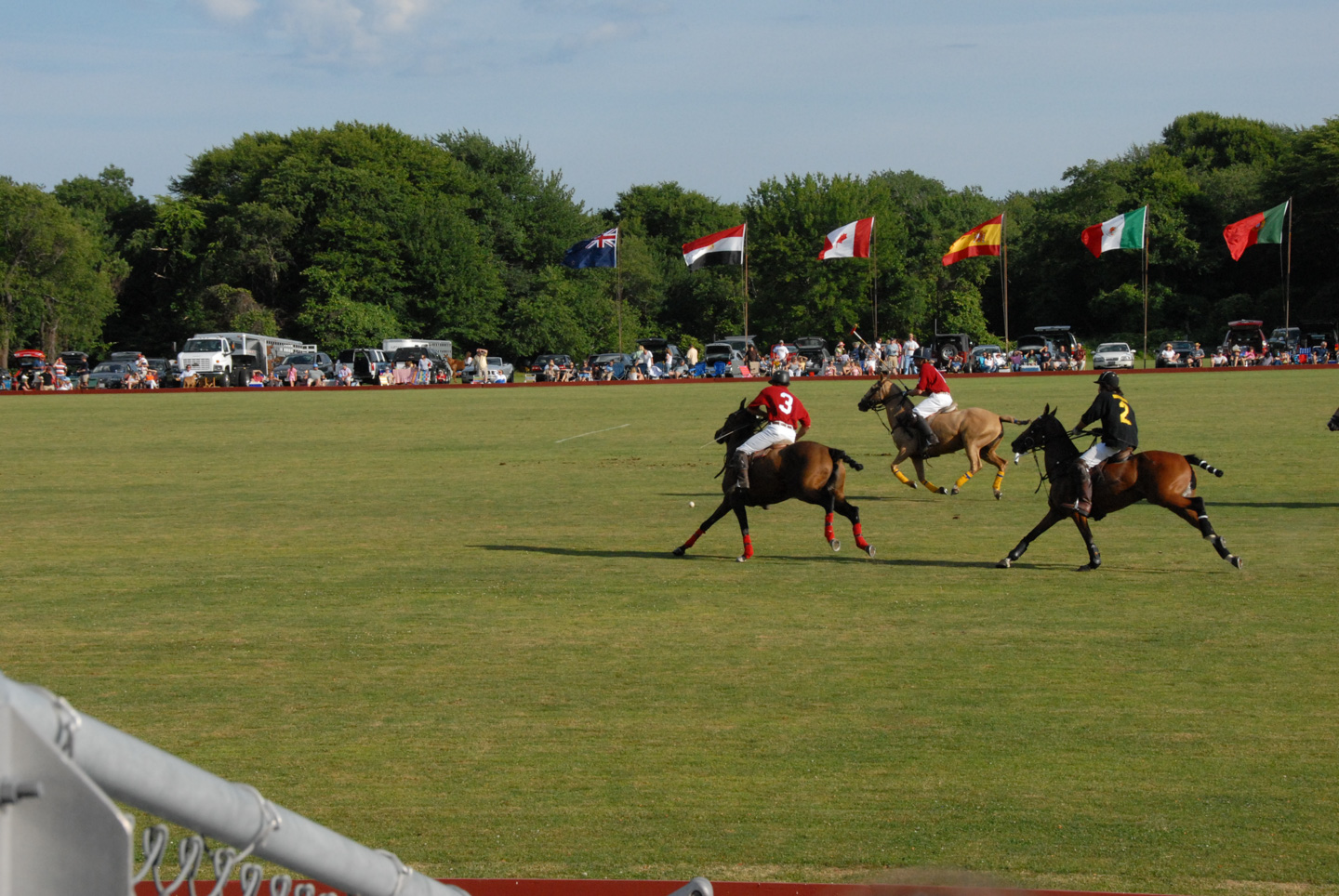 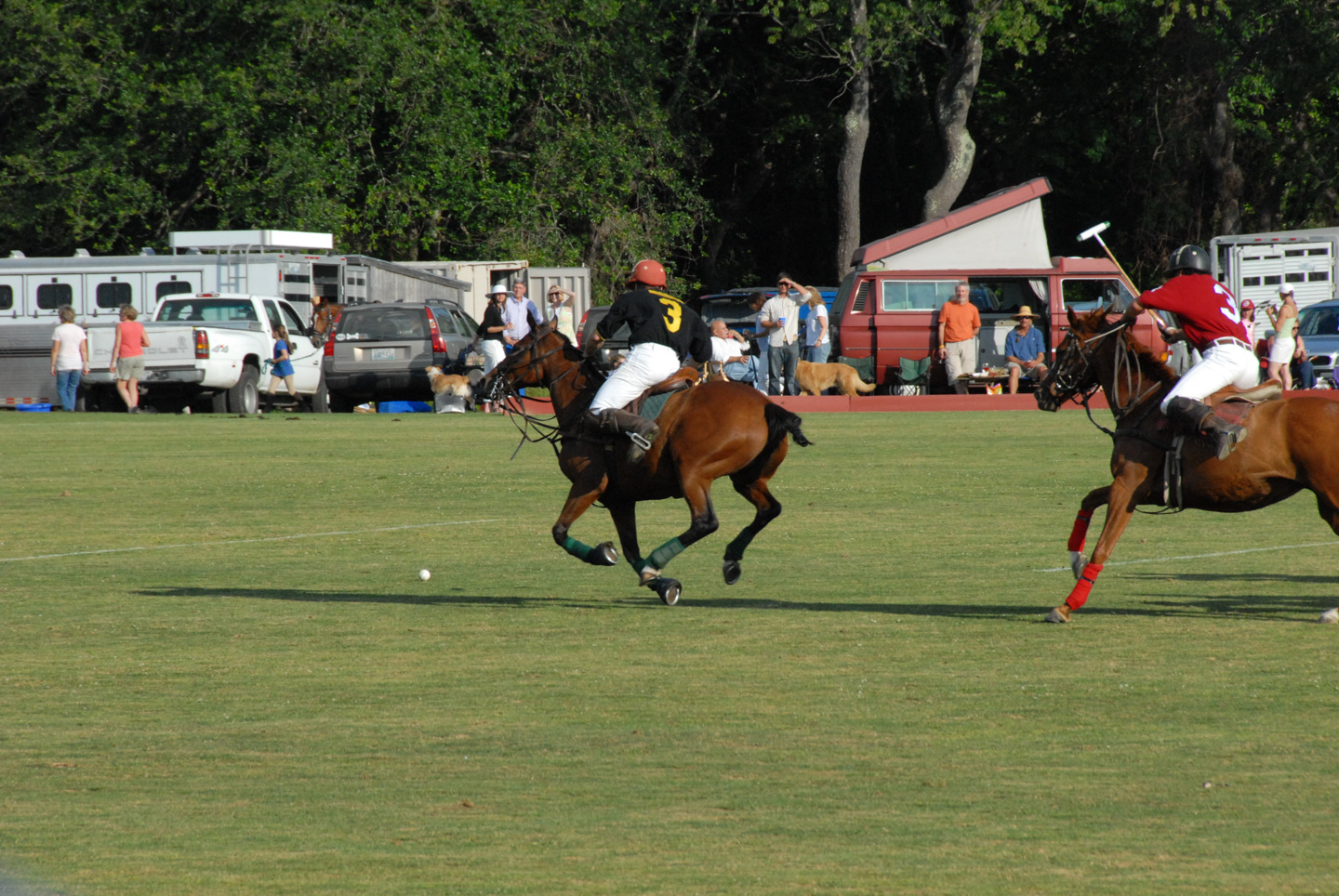 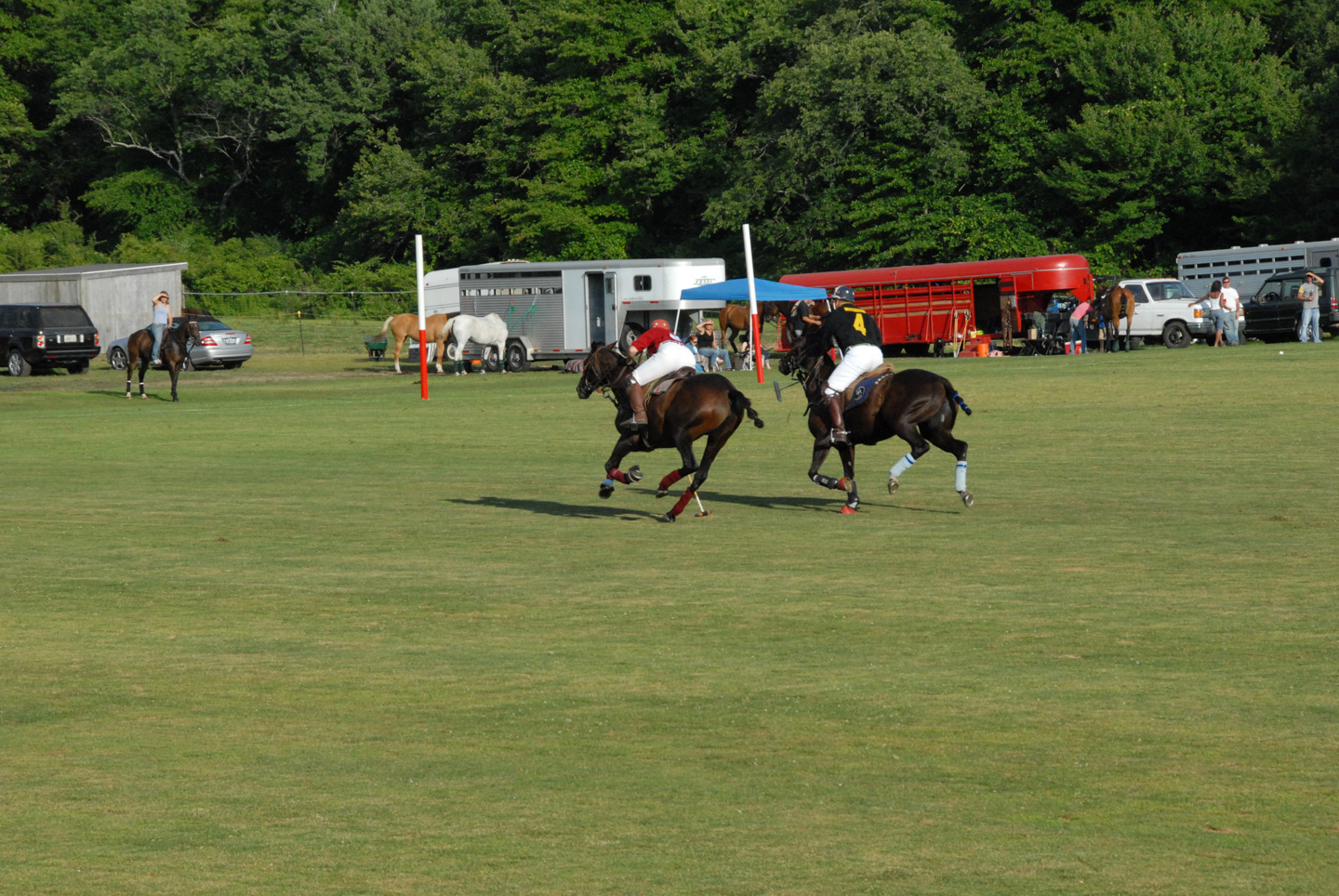 Notice in this next shot that the black team player is not cutting off the red team player, but has to really reach in order to hit the ball. 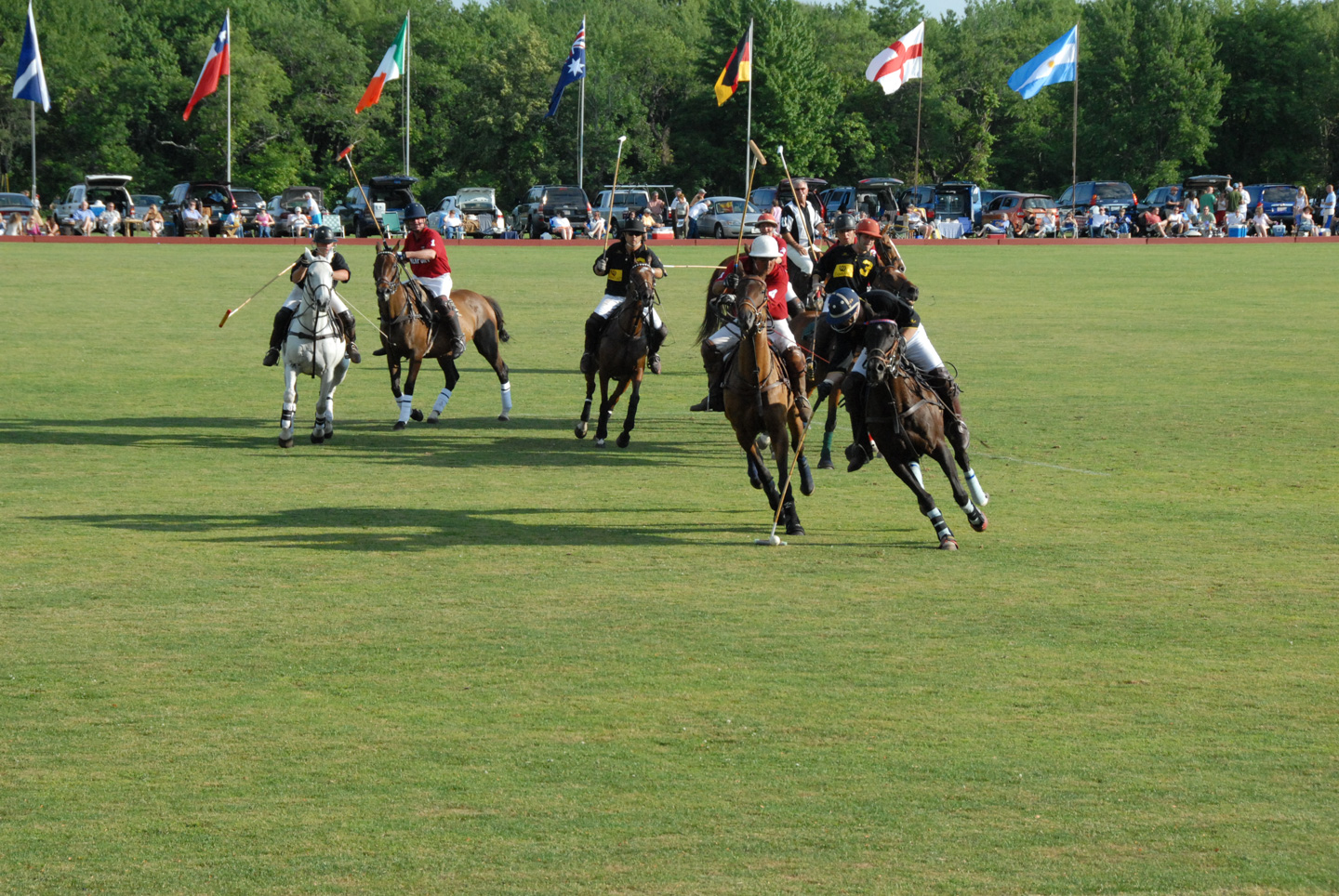 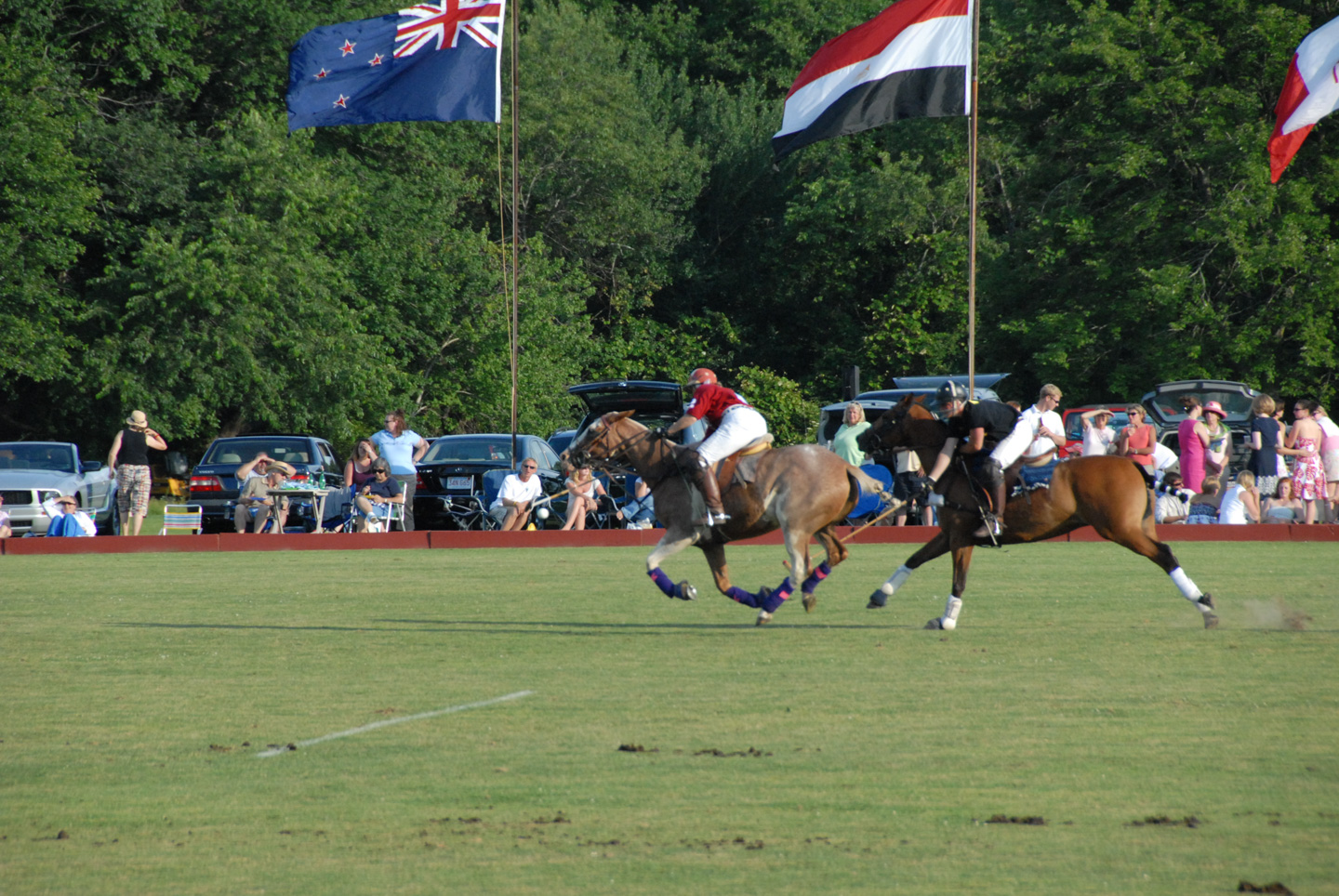 This next picture shows how the black team player has to reach over to his left side in order to have a chance of hitting the ball. Notice also how bent the fetlock area of the horse's leg is; I didn't know that they could do that.: 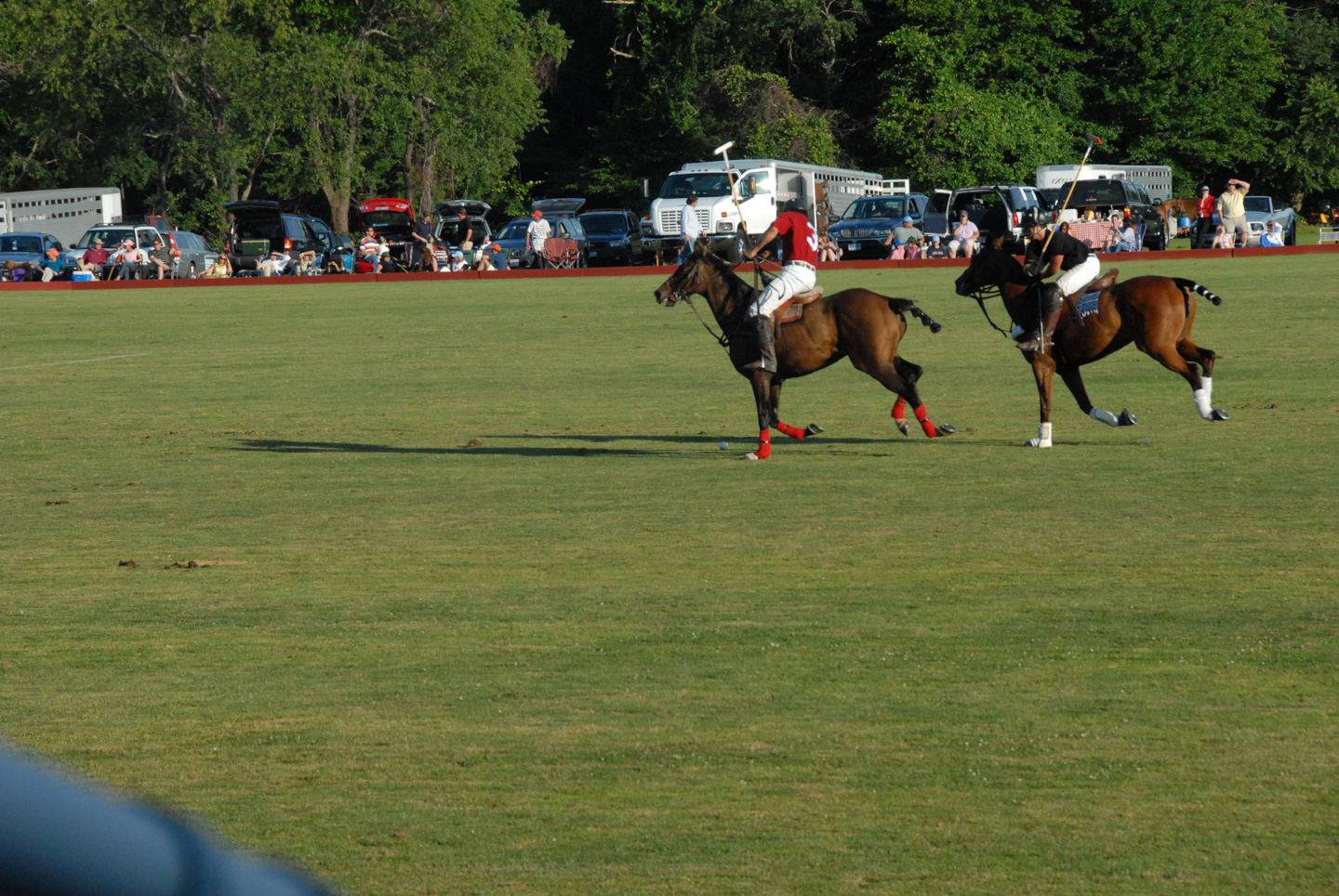 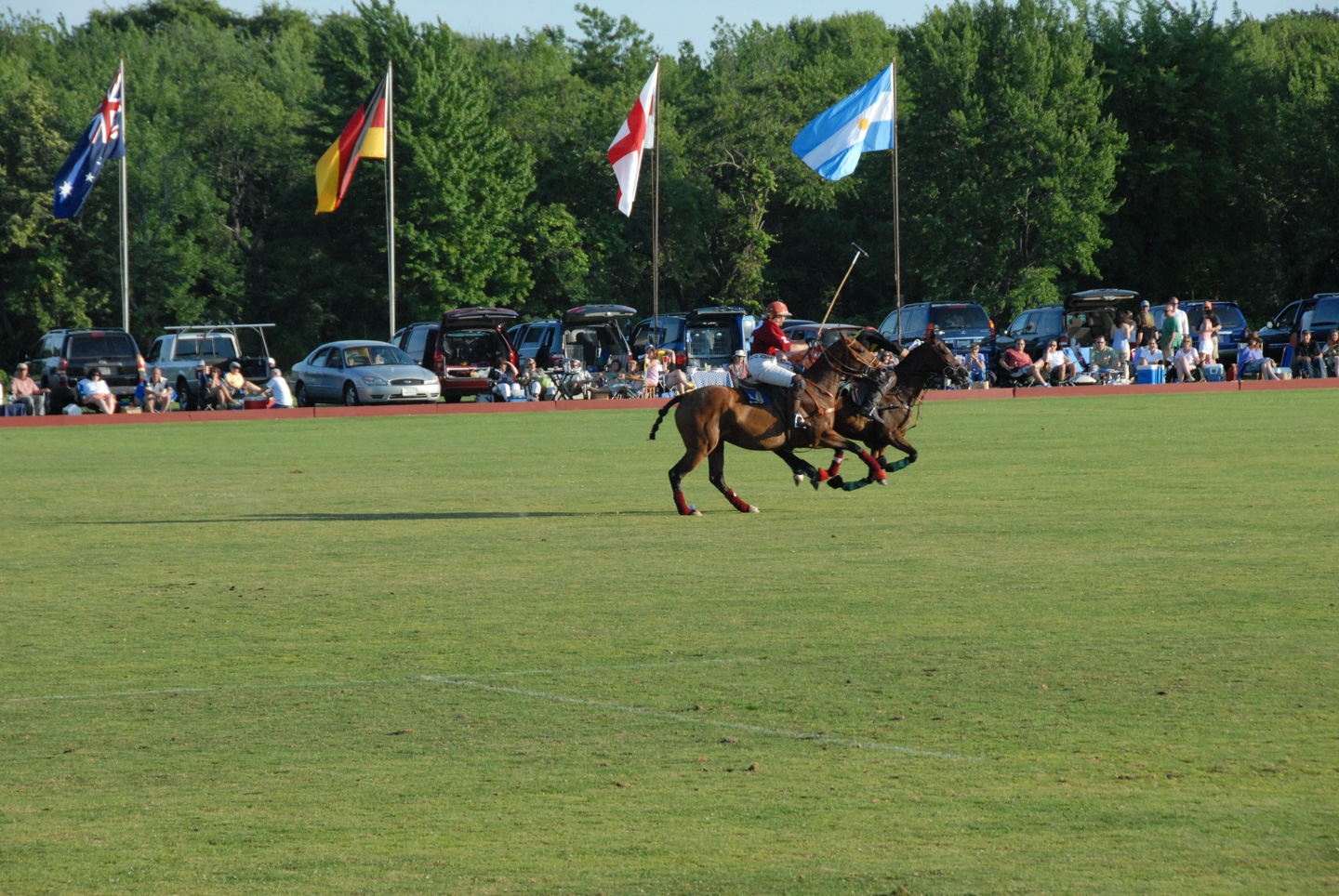 At the end of the game, the viewers go up to the edge of the field, and the players canter by & slap the hands of the audience. Of course, you are probably also familiar with the tradition of stomping divots at the half way point (we don't have pictures of that). 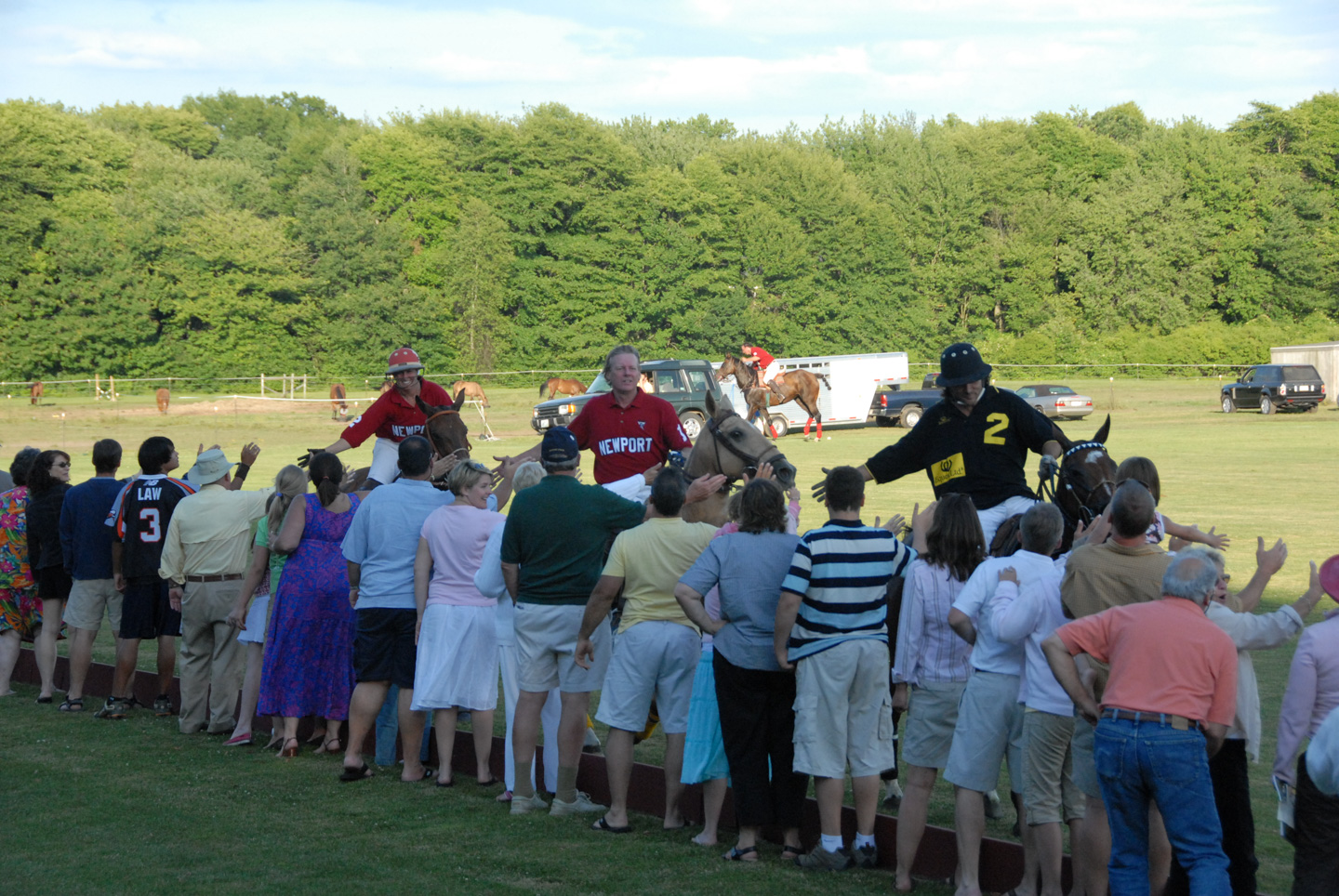 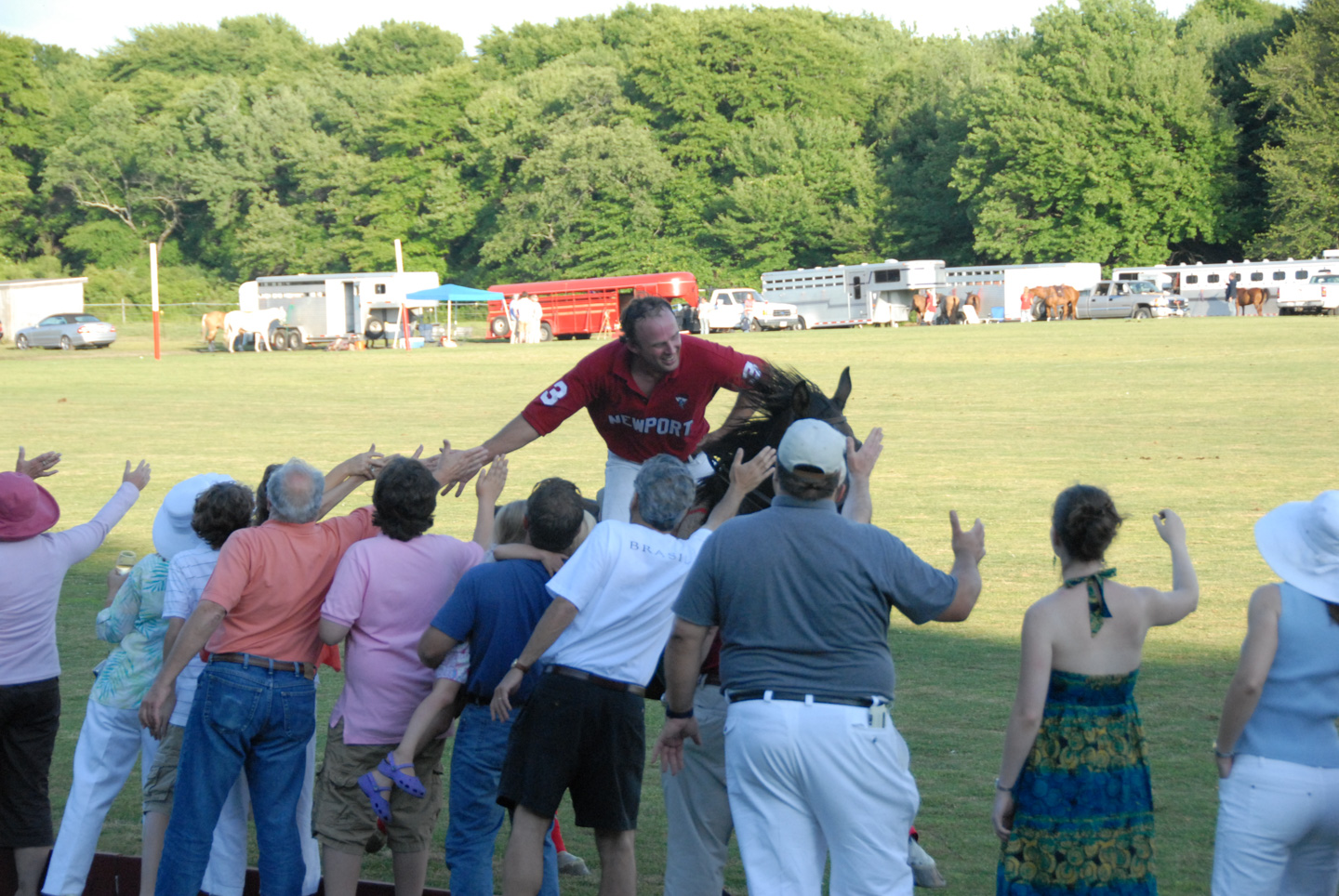 Probably more pictures than you really wanted to see of a polo game...